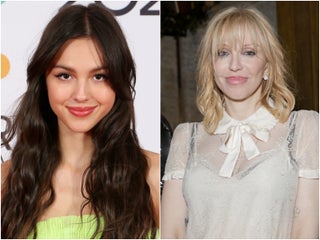 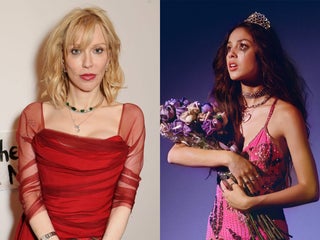 Courtney Love slams new Pamela Anderson series and its star Lily James: ‘Whoever the f— she is’

"Pam & Tommy" stars Lily James as Pamela Anderson and Sebastian Stan as Tommy Lee and will explore the incidents around the couple's leaked sex tape. 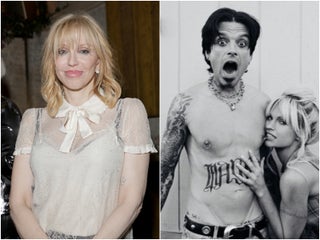 Courtney Love has never been shy about saying... Caught in the riot act. Courtney Love was caught up in an anti-Uber protest in France. Dave Grohl isn’t in HBO’s new Kurt Cobain documentary, but he wanted to be

For close to two decades, Courtney Love and the... Dave Grohl isn’t in HBO’s new Kurt Cobain documentary, but he wanted to be

For close to two decades Courtney Love and the... Courtney Love Already ‘Lost About $US27 Million’ Of Her ‘Nirvana Money’

Courtney Love is worth an estimated $US150... New York Times reporter Frank Bruni was innocently on his way home from dinner at Barbuto in New York City’s West Village when he realised the iPhone next to him in the cab was not his own. So Bruni took the phone home with him. “It didn’t ring last night, […] Even Courtney Love Is Telling Amanda Bynes To ‘Pull It Together’

You can guess how she reacted to that one. Also: Someone made Courtney Love a company spokesperson. Courtney Love’s Ex-Assistant Is Accusing Her Of ‘Evil, Despicable Conduct’

Hole frontwoman Courtney Love, who was sued last month for alleged nonpayment of more than $400,000 in attorney’s fees, is now facing a different lawsuit from her former assistant. The new suit alleges unpaid wages and a whole lot more — including claims that Love directed her assistant to hire […] GettyAfter breaking up last month, Sofia Vergara and Nick Loeb are back together for good.While celebrating her 40th birthday in Mexico alongside 90 of her closest friends and family (including her “Modern Family” co-stars), Sofia Vergara got engaged to her on-again boyfriend Nick Loeb after he popped the question in […] Courtney Love’s Ex-Lawyer Is Suing The Singer For Nearly $500,000 In Unpaid Fees

A Los Angeles-based attorney is suing Kurt Cobain’s wife for failing to pay up after he defended her on everything from a Twitter defamation lawsuit to claims she and her daughter had been defrauded out of hundreds of millions of dollars.In his lawsuit, filed Monday, Keith Fink claims he began […]

Courtney Love launches her art career by covering her wedding dress with obscene words and nude sketches. Amanda Seyfried shows some skin in the first poster for the new “Lovelace” film. David Beckham celebrated his 37th birthday yesterday with a kiss from wife Victoria, home-cooked breakfast from his boys and […]