Chernobyl’s ‘sarcophagus,’ which helped contain the spread of radiation, is being dismantled because it’s teetering on collapse

On April 26, 1986, the core of a reactor opened at the Chernobyl Nuclear Power Plant, releasing enormous amounts of radioactive material like corium, uranium, and plutonium. In the months after the disaster, workers scrambled to build a covering, or “sarcophagus,” to prevent the spread of contaminants. The sarcophagus is […] Chernobyl’s power plant managers ‘hid’ their radiation levels so they could protect cleanup workers, according to former deputy director

Chernobyl was one of the worst nuclear disasters the world has ever seen, resulting in widespread contamination throughout Europe. Workers on the cleanup site immediately following the accident had to record their radiation levels using a dosimeter, or device that measures a person’s dose of radiation. The former deputy director […] The former deputy director of the Chernobyl Nuclear Power Plant says the Emmy-winning HBO series got its villain right, but its hero wrong

The HBO miniseries “Chernobyl” won 10 Emmy awards on Sunday, including for Outstanding Limited Series. The miniseries mirrors the real-life events of the tragic 1986 nuclear disaster. But the former deputy director of the Chernobyl Nuclear Power Plant, Alexander Kovalenko, said the real tragedy was “much worse.” Kovalenko was called […] Chernobyl is considered the world’s worst nuclear-power-plant accident because of its widespread release of radioactive contaminants. More than three decades later, the disaster continues to have both a human and environmental impact. It has also incited some strange events, from the spread of radioactive cow’s milk to the salvation of […] Chernobyl was the world’s worst nuclear-power-plant accident. Here’s how it compares with Fukushima and Three Mile Island.

HBO’s “Chernobyl” series has reignited comparisons between the Soviet power-plant accident and other nuclear accidents worldwide. Chernobyl is widely acknowledged to be the worst nuclear accident in history, but a few scientists have argued that the accident at Fukushima was even more destructive. Both events were far worse than the […] HBO’s “Chernobyl” series has reignited interest in the Chernobyl Exclusion Zone, a restricted area that allows visitors. In recent days, tourists have been criticised for disrespecting the site with raunchy or flippant photos on Instagram. Business Insider asked Claire Corkhill, a nuclear-waste expert who has been assisting with the Chernobyl […] HBO’s “Chernobyl” series tells the story of the world’s worst nuclear-power-plant accident. The show is nominated for 19 Emmy awards, including in the Outstanding Limited Series category, in which it’s considered a frontrunner. Most of the characters who appear in the show existed in real life – and a few […] Russia is making its own TV series about the 1986 Chernobyl nuclear disaster to rival the HBO miniseries. But the Russian version will be about a KGB agent hunting down CIA agents trying to sabotage the nuclear reactor before the disaster, director Alexei Muradov said on Tuesday. HBO’s “Chernobyl” series […]

HBO’s series “Chernobyl” invented a main character to tell the story of the world’s worst nuclear power plant accident, which took place in 1986. The miniseries earned 19 Emmy nominations, including in the Outstanding Limited Series category, in which it’s considered a frontrunner. The character of Ulana Khomyuk represents a […] ‘Apples the size of watermelons’: A psychologist reveals what it was like to grow up in the Chernobyl fallout zone

Janina Scarlet was just under 3 years old when the Chernobyl Nuclear Power Plant blew up. Chernobyl was the worst nuclear-reactor disaster in history. The explosion spread toxic radiation over large swaths of Ukraine, including Scarlet’s hometown. Scarlet said she was often sick as a child, with a weak immune […]

Photos show what daily life is really like inside Chernobyl’s exclusion zone, one of the most polluted areas in the world

On April 26, 1986, a power surge at the Chernobyl nuclear power plant resulted in what is the worst nuclear disaster in world history. Thousands abandoned their homes and their worldly possessions, rendering much of the area surrounding the power plant nearly desolate to this day. However, some residents returned […] 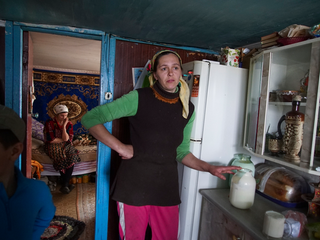 This giant building is basically a tomb for Chernobyl