Chegg spiked as much as 37% Tuesday following a surge in subscribers as students transition to online learning amid the coronavirus pandemic. The online learning company reported first quarter earnings on Monday, topping analyst estimates. Chegg is not sure how long the positive trend will continue, as it’s unclear when […] 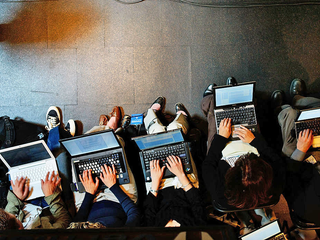 Data breaches in 2018 compromised the personal information of millions of people around the world. Some of the biggest victims in 2018 include T-Mobile, Quora, Google, and Orbitz. Facebook dealt with a slew of major breaches and incidents that affected more than 100 million users of the popular social network. […] Dan Rosensweig, the CEO of Chegg and ex-COO of... Former Yahoo COO says the company should go private so it can make ‘big, bold bets’

Dan Rosensweig is the founder and CEO of Chegg... Good morning! Here’s the scoop: Netflix introduced a new “unified” TV interface. Google is officially bigger than both the magazine and newspaper industries. Microsoft’s Joe Belfiore will soon take over the company’s Internet Explorer app development program. Twitter is diving deeper into the events industry. It recently announced a new […] Chegg Is “Deep In Talks” With Bankers, Planning An IPO

Chegg, the Netflix-for-textbooks, is “deep in talks” with bankers as it plans for an IPO, Kara Swisher reports.Chegg raised $75 million last fall, bringing its funding total to $219 million. Ex-Yahoo Dan Rosensweig runs the company. How Chegg Is Becoming The Operating System Of The College Experience

Every student knows that the cost of education doesn’t stop with paying the tuition bill. Textbooks are another big expense that can run up to several hundred dollars per class. THE DOWNLOAD: Ex-Yahoo Dan Rosensweig Opens Up About Why Yahoo Collapsed And How To Save It

Poor Yahoo. Once a game-changer in online content, the company is now without a CEO, its board has given up, and competitors are now contemplating making offers for all or part of the company. How To Save Beer Money Renting Your Textbooks On Chegg

[credit provider=”Sarah Melita” url=”http://www.flickr.com/photos/sarahmelita907/2951367604/sizes/l/”] Few industries are more badly in need of disruption than textbook publishing.Every semester, students fork over masses of cash for extremely expensive textbooks. Teachers choose the books, but students pay for them, so the incentives to compete on price aren’t what they should be. Then, every […]