Two of four US Navy sailors assigned to the French nuclear-powered aircraft carrier FS Charles de Gaulle have tested positive for the coronavirus, the Navy announced Wednesday. All four sailors, who are taking part in the Personnel Exchange Program, are in quarantine, defence officials told CNN, which first reported the […] 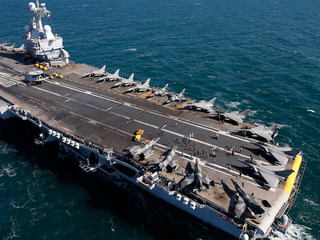 US allies are ‘back in the big carrier business,’ but the US isn’t so sure how many flattops it will have in the future

The US, British, and French navies all had carriers at sea in January, including the US and UK’s newest flat tops. Those new carriers, and one France may acquire in coming years, will be in service for decades, but on the US side, changes may be coming for the role […] Nuclear-powered aircraft carriers are more effective than conventionally-powered carriers for two basic reasons. One, nuclear power provides more energy for catapults and sensors than fossil fuel; and two, the lack of fossil fuels onboard also frees up a lot of space for more missiles and bombs. But there are only […] VIDEO: The aircraft carrier -- the largest in the European Union -- was dispatched to the region last month. VIDEO: It's roughly the length of three football fields.