After measuring radiation on the moon for the first time, scientists say a lunar base should be built underground to protect astronauts

NASA recently unveiled the plan for its Artemis program, a series of missions that would return astronauts to the moon. A new study found how much radiation astronauts are exposed to on the lunar surface: a daily dose about 200 times as great as on Earth. NASA wants to build […] 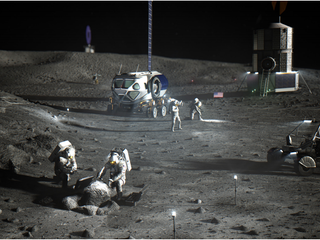 China landed a spacecraft called Chang’e 4 on the moon’s far side in January 2019 – the first country ever to do so. The rover has measured a layer of lunar dust, or regolith, that’s “quite thick”: It extends 12 meters (39 feet) deep. The moon’s dust caused problems for […] 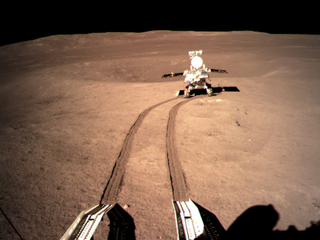 China recently landed the first-ever robotic mission on the far side (not “dark side“) of the moon, called Chang’e 4. NASA’s Lunar Reconnaissance Orbiter, a moon satellite, photographed the Chinese spacecraft on January 30. NASA published the first satellite image of China’s landing site on Wednesday. The image shows the […] China recently landed the first space mission on the far side of the moon. The mission, called Chang’e 4, was sent to probe the moon’s geology, seek out water, study the night sky, and even grow silkworms on the lunar surface. The mission’s landing spacecraft and Yutu 2 rover recently […] On January 3, China landed its Chang’e 4 spacecraft on the moon’s far side – the first such mission in history. The mission’s lander and Yutu-2 rover will probe the moon’s geology, look for water, study the night sky for radio bursts, and even grow silkworms. However, it’s now high […] There is a ‘dark side’ of the moon, but you are probably using the term incorrectly all of the time

People often say “dark side” of the moon when referring to the lunar face we can’t see from Earth. This common use of the phrase is wrong – the term scientists use is the “far side.” One lunar side always faces Earth, or is tidally locked, because the moon’s rotation […] For the first time in history, China landed a spacecraft on the moon’s far side. The Chang’e-4 mission safely placed a rover and lander on the lunar surface Wednesday night (early Thursday morning in China). Broadly, the moon mission landed inside a crater that’s located within a large, ancient collision […] China just landed a spacecraft on the moon’s far side for the first time in history. Here’s why the mission may be revolutionary.

On December 7, China launched the first-ever space mission to the lunar far side – the face of the moon we can’t see from Earth. The mission, called Chang’e-4, set down a rover and lander on the lunar surface on Wednesday night (Thursday morning in China). The two Chinese-built robots […] China said on Wednesday that it plans to launch two robots to the moon in December. The new mission, called Chang’e-4, aims to set a lunar rover and lander on the far side of the moon. The robots will study the geology and chemistry of the moon’s most ancient and […] In May, China launched two small microsatellites, called Longjiang-1 and Longjiang-2, into orbit around the moon. One of the spacecraft took a stunning photo of Earth and the moon using a Saudi Arabian camera system. The microsatellites were part of a mission to launch a lunar relay satellite called Queqiao, […]