A dwarf planet between Mars and Jupiter has a salty ocean beneath its surface, making it a contender for alien life

A NASA spacecraft has discovered that a saltwater ocean lies deep below the surface of Ceres, a dwarf planet in the asteroid belt between Mars and Jupiter. New research shows that shiny salt deposits on Ceres’ surface were left by water percolating up from underground. Ceres may have once held […] 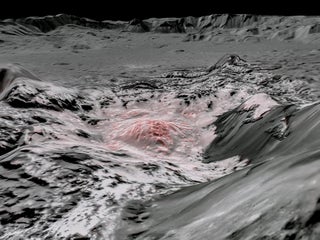 NASA launched an ion-propelled probe called Dawn toward the asteroid belt in 2007. In 2015, Dawn reached Ceres, a Texas-sized dwarf planet that may hide a salty ocean and possibly alien life. The spacecraft is almost out of fuel, and its mission may end between mid-September and mid-October. Researchers expect […] Ceres is a Texas-size dwarf planet in the Asteroid Belt that may hide a salty ocean. NASA’s ion-propelled Dawn probe reached Ceres in 2015 – the first visit to the mysterious world. Now NASA is now thrusting Dawn 10 times closer to Ceres than ever before, which will allow the […] Millions of miles from Earth, NASA found a mysterious ice volcano that’s half the size of Mt. Everest

For the first time, NASA scientists have found... NASA reveals the most fascinating places on this giant, nearby asteroid that have scientists stumped

VIDEO: NASA's Dawn spacecraft has been in orbit around the giant asteroid, Ceres, for more than a year. VIDEO: Newly discovered materials on the distant asteroid Ceres leads to speculation that aliens may have once called it home. Scientists believe the bright spots seen on the dwarf planet Ceres may be underground material seeping through after impact strikes cracked the surface. Nearly a year after NASA’s Dawn spacecraft began a three-day orbit of Ceres, the mystery of more than 130 bright spots dotting its surface is still just […]

Good morning. 1. The US Fed didn’t move rates and no one was surprised. But the statement that followed was perhaps a bit more dovish than expected and all the US market closed up, helping the local market with the ASX SPI 200 futures contract up 34 points, 0.7% this […]

The mysterious bright spots on Ceres are changing

Nestled 250 million miles from Earth, between... VIDEO: NASA's Dawn Spacecraft is flying 240 miles above Ceres, and the images it is capturing are revealing fascinating characteristics of the minor planet's surface. VIDEO: The white spots on Ceres have been a mystery until now. Scientists think they know more about what causes the bright spots seen on the dwarf planet Ceres. Not a lot more – the agency says the phenomenon is “consistent” with a type of magnesium sulphate. Basically, it’s a massive dump of interplanetary bath salts. A team at the Max Planck […]

Well, that rules ice out. Neil deGrasse Tyson explains why astronomers are obsessed with Ceres

VIDEO: Ceres technically isn't a planet, but it's still Neil deGrasse Tyson's pick as the most underrated planet. This dwarf planet is full of surprises. God, it's a barren, featureless desert out there.