“Captain Marvel” directors Anna Boden and Ryan Fleck turned to “Black Panther” director Ryan Coogler when they needed to talk to someone about the process of making a movie for the Marvel Cinematic Universe. Boden and Fleck told Business Insider the advice Coogler gave them was the motivation they needed […] Samuel L. Jackson has been in a lot of movies. Some are good. Some are bad. But in all of them, Jackson gives performances that will entertain the heck out of you. And he often delivers a memorable line or two you won’t be able to get out of your […] ‘Captain Marvel’ editor describes what makes Marvel Studios a unique place to work, and the funny way she got the job

Business Insider spoke with “Captain Marvel” co-editor Debbie Berman, who has also worked on Marvel’s “Spider-Man: Homecoming” and “Black Panther.” Berman talked about how her Marvel experiences have been different, and what it’s like working with Marvel Studios. She also said Lee Pace’s Ronan was originally introduced earlier in the […] “Captain Marvel” directors Anna Boden and Ryan Fleck set the record straight about the rumours they were considered for the first “Guardians of the Galaxy” movie. Boden told Business Insider that they were never in the running but that the reports might have helped them get on the radar of […] Every Marvel Cinematic Universe movie, ranked from worst to best

“Captain Marvel” brought in an estimated $US153 million over the weekend. That’s the third-largest March opening-weekend in movie history. It’s also the seventh-biggest opening for a Marvel Cinematic Universe title. Carol Danvers didn’t just kick some Skrull butt this weekend, but also that of internet trolls. Despite the efforts by […] ‘Captain Marvel’ is already making big money at the box office, despite the trolls

“Captain Marvel” earned $US20.7 million in Thursday preview screenings. That’s the fifth-best preview show for a movie in the Marvel Cinematic Universe. The Disney release is projected to earn over $US125 million this weekend. Though the domestic box office so far this year has been unimpressive, business is going to […] ‘Captain Marvel’ is the latest movie to be attacked by online trolls, and Rotten Tomatoes might make more changes to stop them

“Captain Marvel” is the latest blockbuster to be targeted by online trolls who are taking to Rotten Tomatoes and other review-aggregator sites to tank user scores. Rotten Tomatoes changed its policy recently so that users can’t review movies prior to their release, but a representative told The Hollywood Reporter that […]

How Captain Marvel can be instrumental to beating Thanos in ‘Avengers: Endgame’

‘Captain Marvel’ directors on why they have nothing but love for the internet trolls, and how being falsely linked to another Marvel movie might have gotten them the job

“Captain Marvel” directors Anna Boden and Ryan Fleck opened up about the advice “Black Panther” director Ryan Coogler gave them and why false reports that they were in the running for the “Guardians of the Galaxy” job back in 2012 might have gotten them on the radar of Marvel executives. […] ‘Captain Marvel’ has 2 end-credits scenes — here’s what they mean for ‘Avengers: Endgame’

Warning: There are spoilers ahead for “Captain Marvel.” A younger Samuel L. Jackson appears in the latest Marvel Cinematic Universe instalment with two eyes during the ’90s. The movie reveals how he came to lose the eye. It’s a much more Disney/Marvel-friendly answer than how Fury loses his eye in […]

BoxOfficeAnalyst.com’s Doug Stone told Business Insider he estimates “Captain Marvel” to open with between $US175 million and $US185 million. Exhibitor Relations senior analyst Jeff Bock had a more conservative estimate at $US95 million, which he said is “still an epic launch for an unknown” superhero. The 2018 box office broke […] ‘Captain Marvel’ is a fun origin movie filled with ’90s nostalgia, but it has flaws

“Captain Marvel” is the latest Marvel Cinematic Universe movie from Disney. Though the movie has a couple of dull spots, for the most part it’s fun. A big standout is the unique way writer-directors Anna Boden and Ryan Fleck give the backstory of the Carol Danvers character. “Captain Marvel” (in […] 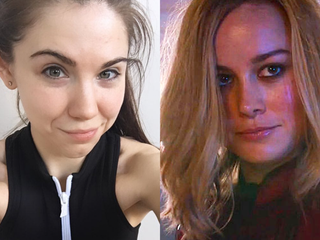 How much money 6 Marvel superhero actors got paid, including a $75 million salary for Robert Downey Jr. in ‘Avengers: Endgame’

It seems fitting that the man who started the Marvel Cinematic Universe would also be paid the most. Robert Downey Jr., who kicked off the MCU with “Iron Man” back in 2008, took in at least $US75 million on “Avengers: Endgame,” according to The Hollywood Reporter. It’s a long way […] Marvel’s upcoming “Captain Marvel” movie is a flashback story set in the ’90s. So it’s utterly appropriate that Marvel made a ’90s throwback website to promote the film. It’s filled with lots of perfect little ’90s details – you have to see it to believe it. As you probably know […] Marvel leads the most anticipated movies of 2019 with ‘Captain Marvel’ and ‘Avengers: Endgame’ — but Star Wars is shut out

IMDb released its list of the most anticipated movies of 2019. The list includes Marvel blockbusters “Captain Marvel” and “Avengers: Endgame,” as well as the next films from acclaimed filmmakers Quentin Tarantino and Martin Scorsese. 2018 has been a record year at the box office, which has hit $US11 billion […]

Jude Law appeared on CBS’ “The Late Show With Stephen Colbert” on Monday and was careful to avoid spilling secrets about his parts in “Fantastic Beasts: The Crimes of Grindelwald” and “Captain Marvel.” The 45-year-old said that when working on both films, he noticed that there were different approaches on […]

The first trailer for “Captain Marvel” debuted Tuesday on Good Morning America. The trailer sets up a young Nick Fury’s (Samuel L. Jackson) first meeting with Carol Danvers, a.k.a. Captain Marvel (Brie Larson). The trailer features glimpses of the 1990s setting, Fury, the alien Skrulls, and Larson in her full […]

New details and images from “Captain Marvel” suggest that the movie holds the answer to the future of the Marvel Cinematic Universe after “Avengers 4.” The movie introduces the shape-shifting alien Skrulls, who invade Earth in the comics by posing as many popular characters. It also teases another superhero who […] The first image of Brie Larson as Captain Marvel debuted Wednesday from Entertainment Weekly, along with other photos from the production of her standalone movie. Larson’s costume is very reflective of the comics. “Captain Marvel” comes to theatres March 8. Brie Larson is suited up in the first official look […] Plans are ‘in the works’ to add Muslim superhero Ms. Marvel to the Marvel Cinematic Universe Everything we know about the ‘Captain Marvel’ movie, which will be a must-watch before ‘Avengers 4’ “Avengers: Infinity War” may signal changes for the Marvel Cinematic Universe going forward, but it’s far from the end of the line for the franchise. Marvel Studios has scheduled nine release dates from 2020 to 2022 for as-yet-unannounced movies. One of the dates in 2020 – though we don’t know […] What you need to know about Captain Marvel, who will play a big role in the next ‘Avengers’ movie The new ‘Captain Marvel’ actress is going to direct a movie Though Marvel Studios has had huge success in... The fans have spoken. A Capitol rioter who pleaded guilty this week compared January 6...