Brad Pitt joked in his Oscars speech that he would ride Leonardo DiCaprio’s coattails any day: ‘The view’s fantastic’

Brad Pitt won the Oscar for best actor in a supporting role for playing Cliff Booth in “Once Upon a Time in Hollywood.” The actor paid tribute to the movie’s director, Quentin Tarantino, calling him “original” and “one of a kind.” He also gave a shoutout to his costar Leonardo […] Brad Pitt won best actor in a supporting role in a motion picture for “Once Upon a Time in Hollywood” at the 2020 Golden Globes. During his acceptance speech, he gave a special shout-out to his costar Leonardo DiCaprio, calling him “LDC.” “I also have to thank my partner in […] Brad Pitt is a well-known actor thanks to his roles in the “Ocean’s” franchise, “Se7en,” and “Moneyball.” There are some things fans might not know about the “Once Upon a Time in Hollywood” and “Ad Astra” star. For example, “How to Train Your Dragon” made him cry and his favourite […] 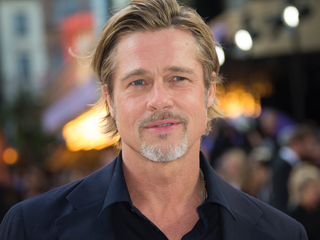 Brad Pitt recently sent fans into a frenzy when his October cover story for GQ magazine was released Monday. During an interview with “Entertainment Tonight,” the 55-year-old actor said he didn’t know what it meant to “break the internet.” He was also unfamiliar with the slang term “lordt,” which was […] The first poster for Brad Pitt and Leonardo DiCaprio’s new movie was released, and people are making jokes about its amateurish design

The first poster for Quentin Tarantino’s upcoming movie, “Once Upon a Time in Hollywood,” was released by Sony Pictures on Monday. People online weren’t impressed and called the artwork “disappointing” and “underwhelming.” The poster features Brad Pitt and Leonardo DiCaprio, and many people thought that Pitt’s face didn’t match his […]