Atlanta Mayor Keisha Bottoms strongly urged her constituents to remain at home to contain the coronavirus and ignore Republican Gov. Brian Kemp’s decision to rapidly reopen Georgia’s economy. “Stay home. Listen to the scientists,” Bottoms said. “There is nothing essential about going to a bowling alley or getting a manicure […] 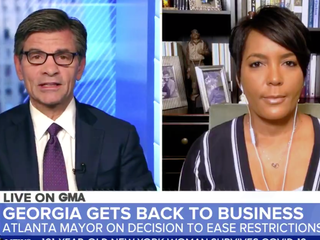 Good memes are hard to find – in fact, we’ve been in a certifiable drought since moth memes. But a new meme that points out how bowling alley screens are kooky is actually pretty funny. Like most of internet culture, the meme originated on Reddit, and then it spread to […] A bowling alley in London is hosting a brunch where you can bring your dog, and it includes bottomless prosecco

A London bowling alley is hosting a series of dog-friendly events including bottomless brunch. From £26.50 ($US33), you can enjoy a brunch dish, two hours of bottomless booze, and then bowling, all accompanied by your pooch. Dogs attending the brunch at All Star Lanes will be given treats too, so […] 42-year-old Adam Breeden has been the brains behind popular venues like All Star Lanes, Bounce, and Flight Club. The ‘social entertainment’ venues have changed going out culture in London and across the UK – and they’re making their way to the US. Under the umbrella of his company Social Entertainment […] Theme park operator Ardent Leisure is selling its Bowling and Entertainment division for $160 million. It’s being rolled into The Entertainment and Education Group, which recently acquired the assets of the arcade business Timezone and is jointly owned by funds advised by Quadrant Private Equity and the Steinberg family, founders […]

A science reporter just so happened to be at... Brooklyn Bowling Alley Shuts Down Because Ebola Patient Went There [credit provider=”Meredith Galante/Business Insider”] Check your weapons and cigarettes at the security, and head inside the black-steel door which leads you to Afghanistan’s first-ever bowling alley.The institution, located in Kabul, is a rare setting for the locals to have some pure fun, according to The New York Times’ Rod Nordland. There is a fun WSJ piece out: “The Secret to Success in Bowling: Getting Hot.” Because many of you are looking for a job — or, if you’re already working, likely keeping your eyes open for a better job — we occasionally feature what we like to call Sweet Jobs, or gigs that rock for whatever reason. This week’s pick: Seven Sports Fanatics’ Dream Homes That Are Currently For Sale

In the fiery summer heat, it can be tough to find a gym that’s not packed to the brim or an outdoor running spot that’s not on blistering asphalt. WATCH This Bowler Miss A 300 Game On The LAST Pin

Yesterday at the PBA Tournament of Champions, Mika Koivuniemi missed a perfect 300 game by just one wobbling pin that refused to fall over in the final frame.