Zhong Shanshan, who owns China’s largest bottled water company Nongfu Spring, has become the country’s richest person. His fortune trebled after Nongfu was listed on the Hong Kong Stock Exchange earlier in September. He knocks Alibaba’s Jack Ma, who spent most of the last six years at the top of […] 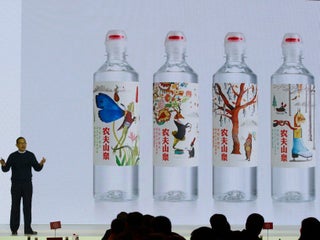 Tests over the last two years have found elevated lead levels in the drinking water in Newark, New Jersey. Some Newark residents have received free water filters from the city, but the Environmental Protection Agency (EPA) recently warned residents that the filters “may not be reliably effective” at removing lead. […] ‘Forever chemicals’ have been found in bottled water brands sold at Whole Foods and CVS, and it’s part of a larger contamination problem

Massachusetts officials recently issued a public-health warning about chemicals called PFAS, which have been found in some bottled water sold at the state’s Whole Foods and CVS locations. These so-called “forever chemicals” have been associated with cancer, liver damage, and developmental issues. The bottled water distributor identified in the Massachusetts […] Americans accidentally eat 200 tiny pieces of towels, beads, and plastic foams every day. Here’s how worried you should be.

Microplastics– tiny plastic particles smaller than a sesame seed and often thinner than a human hair – are ubiquitous in our modern environment. They come from larger plastic debris that gets broken down, as well as microbeads in beauty products and microfiber towels. A new study suggests people in the […] Consumer Reports investigation finds ‘potentially dangerous’ amounts of arsenic in 6 brands of bottled water, including one from Whole Foods

Consumer Reports released the results of an investigation into arsenic levels in bottled water on Thursday. The federal limit for the levels of arsenic found in bottled water is 10 parts per billion (ppb), but CR noted that current research indicates that water can be dangerous to ingest over time […]

Gwyneth Paltrow and her lifestyle-brand Goop are partnering with Flow Alkaline Spring Water. The bottled water industry is booming, but has faced backlash for indistinguishable products and environmentally unfriendly packaging. Flow is attempting to cash in with supposed health benefits from alkaline spring water, as well as more eco-friendly packaging. […] Bottled water sales are skyrocketing, but backlash against the beverage is also brewing. The CEO of Nestlé Waters North America, Fernando Mercé, acknowledged the “challenges” created by negative perceptions of the bottled-water industry at a conference on Friday. Mercé says that Nestlé plans to double down on dealing with plastic […] Pepsi is making a $3.2 billion bet on an unconventional sparkling-water brand as Americans ditch soda

PepsiCo is acquiring SodaStream for $US3.2 billion, the company announced on Monday. SodaStream is a company that sells machines that carbonate water, as well as syrups used to flavour the resulting beverages. The deal comes at a time when Americans are moving away from drinking traditional, sugary sodas. PepsiCo is […] Bottled water is stuck in a $16 billion ‘sea of sameness,’ and it is creating a huge opportunity for Pepsi

PepsiCo is doubling down on bottled and canned water as soda sales slump. The company has launched LIFEWTR and bubly in an attempt to win over health-conscious millennial shoppers. PepsiCo is trying to win over shoppers by making bottled water a “badge” that customers are proud to carry throughout the […] Justin Timberlake has created a new flavour for Bai Brands called Tennessee Braspberry Supertea. The new flavour is a play on a viral video in which Timberlake stuck a blueberry inside a raspberry. Timberlake is an investor in Bai, a swiftly growing flavored-water brand acquired by Dr Pepper Snapple in […] Jaden Smith is launching a new line of flavored bottled water. JUST Water uses bottles that cut down on CO2 emissions. It also invests in local communities and actually encourages customers to reuse bottles instead of buying more. Smith wants to “revolutionise” the $US16 billion bottled-water industry, and he’s taking […]

PepsiCo has launched a new sparkling water brand called bubly. The zero-calorie drink is challenging cult classic LaCroix with bright packaging and cutesy catchphrases, such as tabs that say “Hey u.” Credit Suisse estimates that bubly has the potential to exceed $US100 million in retail sales in 2018. Pepsi has […] Silicon Valley is developing an obsession with untreated, unfiltered water, according to The New York Times. But a food-poisoning expert says that the trend is dangerous and could be deadly. “Raw” water can spread bacteria and diseases including cholera, E. coli, Hepatitis A, and Giardia. When food-safety expert Bill Marler […] Bottled water from major brands like Aquafina, Nestle, and Dasani has been found to contain tiny plastic particles that you’re drinking

Bottled water has twice the amount of microplastic in it that tap water does, according to a new report. Some plastic bottles have as many as 10,000 of these microplastic parts in a single litre. They’re often the same kind of plastic that is used to make the bottle caps. […] Animated map shows where your bottled water actually comes from

VIDEO: This animated map shows the natural springs and local water sources that bring you your favourite bottled water. Studies suggest disposable, plastic water bottles can harbour hundreds of tiny bits of plastic, and we’re drinking them down with bottled H2O. Microplastics are all over the place: in our salt, contaminating our seas, and running out of our taps, too. But there are even more of them lurking in […]