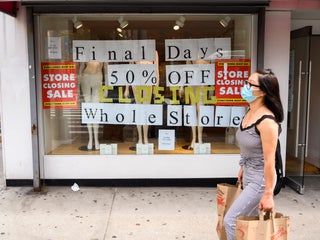 Jailed surfwear mogul Matthew Perrin was so brilliant that he won a medal in law from the University of Queensland. But even his legal standing faces being stripped following action by the Office of the Legal Services Commissioner (LSC), which is seeking to have him struck off as a lawyer. […]

Billabong agrees to a $380 million takeover by Oaktree Capital

The board of ailing surfwear group Billabong International has opened its books to rival Quiksilver Inc after receiving a confidential, indicative and non-binding proposal which values the company at nearly $200 million. Quiksilver earlier this year changed its corporate name to Boardriders Inc, which has offered $1 cash per share […]

Billabong posted its second full year loss, this time a negative $77.13 million, up from the $23 million in the red last year, as the surf wear company restructures in a weak retail market. The online surf wear industry has been under pressure with Billabong competitor SurfStitch going into administration […]

The losses continue but Billabong sees help ahead

Billabong posted a loss of $16.1 million for the six months to December but the surfwear retailer says it expects a lift in earnings in the second half. Sales were down 5.8% to $508.3 million. The company says restructuring costs, including redundancies, and significant items were $9.5 million higher in […]

Former Billabong CEO Matthew Perrin has been convicted of fraud after faking his ex-wife’s signature to get a $13.5 million loan from the Commonwealth Bank. Perrin had been on trial in Brisbane District Court accused of mortgaging his family’s $15 million property in Surfers Paradise without permission from his former […]

Billabong shares are being hammered

Billabong is paying $45 million to fix a shareholder class action

Billabong is paying out $45 million to end a shareholder class action over earnings downgrades which saw the surf clothing company’s share price tumble in 2011. A short time ago, Billabong shares were down 0.76% to $1.31, well down on the 12-month high of $3.85. “The settlement is without any […]

The turnaround of Billabong to a brand-led global company hit a bump, posting a half year loss of $1.6 million. However, sales grew 7.6% to $561.9 million, net profit before tax was $2.1 million and second half earnings are looking better. The December half was dragged down by a $6.9 […]

Billabong shares are being crushed

Its turnaround strategy is working.

Could be worth hundreds of millions of dollars.

Billabong has recorded its first profit in three years

Billabong Is Bouncing Back, But CEO Says The Turnaround Is Still In The Early Stages

Billabong Is Selling Its Online Businesses SurfStich and Swell

Will focus on its own sales online.

Regaining Their ‘Cool’: Can The Big Three Surf Brands Recover?