Sports-betting stocks slumped on Monday amid growing concerns that college football will be cancelled entirely this fall due to the coronavirus pandemic. The MAC on Saturday became the first to cancel its college football season. On Monday, sportscaster Dan Patrick said on his talk show that the Big 10 and […] 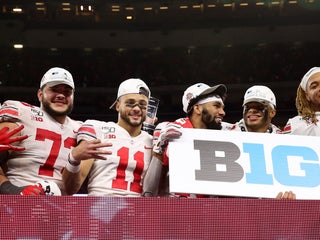 With its remarkable professors, unlimited extracurriculars, and spirit-rousing game day traditions, Penn State has a 159-year-long history of excellence. Its alumni have gone on to become astronauts, Hollywood actors, politicians, and major league athletes, and the school continues to shape future generations of impressive and inspiring individuals. From leading missions […] Fresh off its fantastic Michael Jackson-theme halftime showagainst Iowa, the Ohio State marching band did a “Hollywood blockbuster show” during the Penn State game. The best part was when the band formed a dinosaur, walked down the field, and ate a poor Michigan player. The GIF from SB Nation: Watch […] Wisconsin looked all set to kick a game-winning field goal against Arizona State last night when a strange sequence of events resulted in the most bizarre ending of the season. Arizona State won 32-30 after Wisconsin botched a kneel down, a defender sat on the ball, and the clock ran […] [credit provider=”Screengrab from FOX”] According to The University of Michigan’s lead sports neurologist, Dr. Jeffrey Kutcher, the Wolverines won’t be involved in a joint partnership between the Big 10 and the Ivy League on the study of concussions in sports. Why? It Took An Illinois Player 15 Seconds To Drain A Crazy Three-Pointer, Block A Shot And Beat Ohio State

Illinois won a big game against No. 5 Ohio State last night in Champagne. [credit provider=”ESPN”] Saturday night marks the inaugural Big 10 Championship football game.Michigan State and Wisconsin will square off in a rematch of one of the most thrilling games of the college football season.