Andrew McCabe, the former FBI official who was fired under Trump just hours before his retirement, won back his pension in a settlement with the DOJ

McCabe was fired in 2018 after multiple public attacks from Trump. In a lawsuit against the Justice Department, he alleged the firing was political. 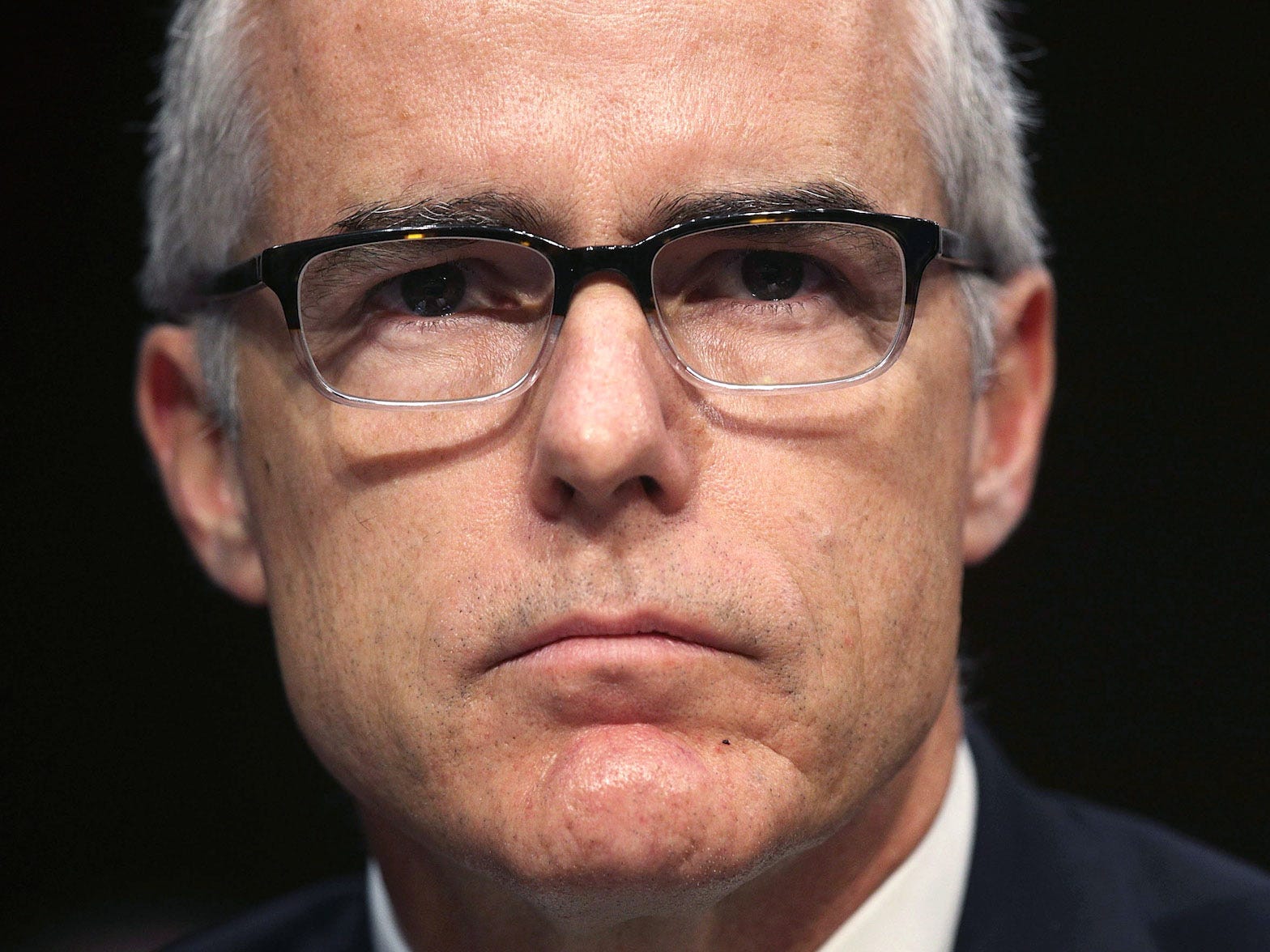 During an appearance on CNN, McCabe told anchor Jim Acosta that Trump's comments about an unnamed Capitol Police officer were "incredibly dangerous." 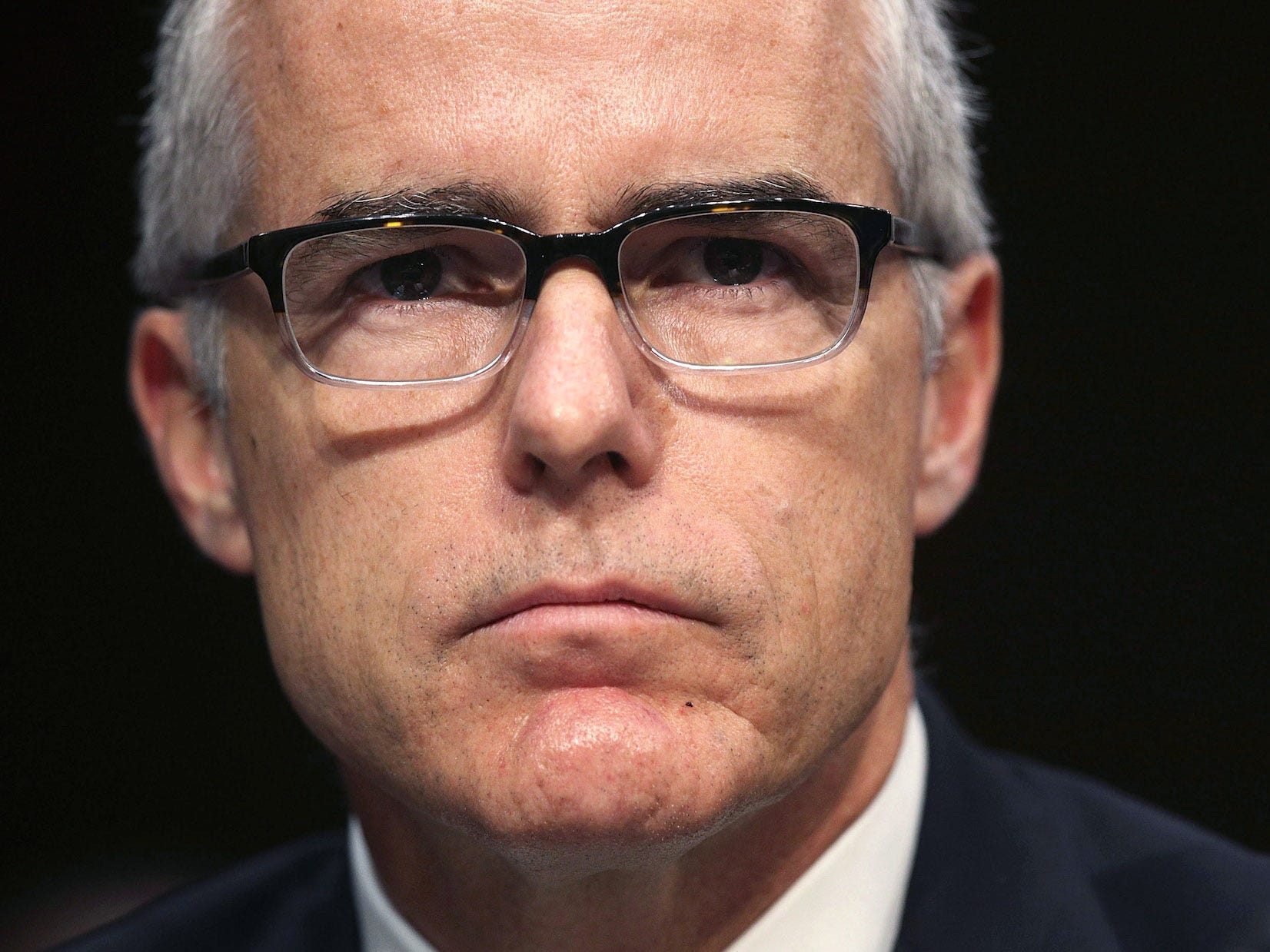 The Department of Justice on Friday announced it won’t pursue criminal charges against former deputy FBI director Andrew McCabe over whether he lied to investigators about a press leak. McCabe was fired by former Attorney General Jeff Sessions after President Donald Trump led a campaign to discredit him over allegations […] 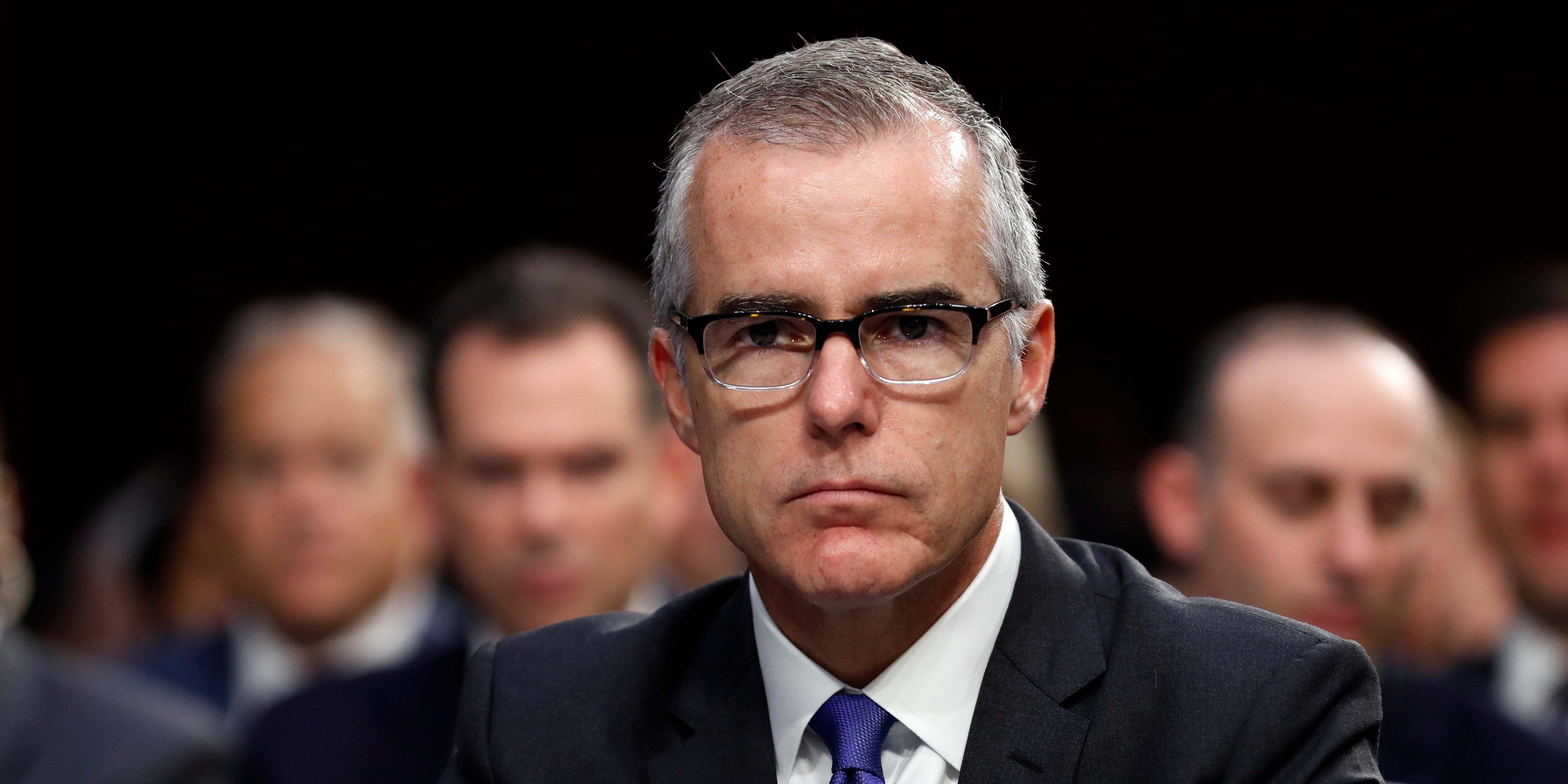 The Justice Department is recommending criminal charges against former FBI Deputy Director Andrew McCabe, Fox News reported. The New York Times and NBC News reported that McCabe appealed the decision, but it was rejected by Deputy Attorney General Jeff Rosen. The move paves the way for a criminal indictment of […] Former FBI deputy director Andrew McCabe will be the keynote speaker at a Democratic fundraiser in Pennsylvania. Tickets for the event range from $US60 to $US180, and the most expensive ticket option allows attendees to get prioritised seating, meet McCabe, and take a photo with him. McCabe was fired from […] James Baker, the FBI’s former general counsel, testified to Congress that Deputy Attorney General Rod Rosenstein told him two members of President Donald Trump’s cabinet were open to invoking the 25th Amendment to remove him from office. The conversation took place in the spring of 2017, shortly after Trump fired […] Former Acting FBI Director Andrew McCabe said he witnessed discussions about invoking the 25th Amendment to the US Constitution, which would provide a pathway to remove President Trump from the White House. Senate Judiciary Chairman Lindsey Graham pledged to hold a hearing and get to the bottom of the issue. […] Andrew McCabe, the former deputy director of the FBI, has described the conversation during which he said Deputy Attorney General Rod Rosenstein first offered to secretly record President Donald Trump in the White House. In a Sunday-night airing of “60 Minutes,” McCabe described what he said was an “incredibly turbulent, […] Jeff Sessions once complained about FBI employees and reminisced about the ‘the old days’ when it ‘only hired Irishmen,’ former deputy director Andrew McCabe reportedly says in his memoir

While attorney general, Jeff Sessions once complained about the racial composition of the FBI and reminisced about the “old days” where “you all only hired Irishmen,” according to a memoir written by Andrew McCabe, the former deputy FBI director, and reviewed by The Wall Street Journal. One person familiar with […] Former Deputy Director of the FBI Andrew McCabe told “60 Minutes” there were conversations within the Justice Department on whether the 25th Amendment should be invoked to remove president Donald Trump from office. McCabe also said Deputy Attorney General Rod Rosenstein had offered to wear a wire to secretly record […] Deputy attorney general Rod Rosenstein and former FBI deputy director Andrew McCabe reportedly had a tense standoff after Robert Mueller was appointed as special counsel for the Russia investigation. The two men reportedly urged each other to recuse themselves from the Russia probe. During one exchange, Rosenstein is said to […] ‘The president needs to know it is all a setup’: Trump’s media allies are warning him not to fire Rod Rosenstein after bombshell NYT report

President Donald Trump’s allies in the media are divided on how to defuse a bombshell report from The New York Times. According to sources in the report published on Friday, deputy attorney general Rod Rosenstein floated the idea of invoking the 25th Amendment to discharge President Donald Trump, and allegedly […] Deputy Attorney General Rod Rosenstein last year discussed using the 25th Amendment to remove President Donald Trump from office and wearing a wire to record his conversations with him, The New York Times reported Friday. Rosenstein is said to have first raised these ideas in the spring of 2017 after […] Prosecutors at the US attorney’s office in Washington, DC, are using a grand jury as they investigate whether former FBI deputy director Andrew McCabe misled the bureau about disclosures to the media during the 2016 election. At least one witness has reportedly been called to testify and the investigation is […] The Department of Justice’s inspector general released the findings of an internal investigation into Andrew McCabe, the former FBI deputy director. The Office of the Inspector General found at least four instances in which McCabe “lacked candor” when discussing his decision to authorise disclosures to the media about the FBI’s […] Jill McCabe, the wife of former FBI deputy director Andrew McCabe, wrote an opinion column calling the allegations that hers and her husband’s work was politically biased “false and utterly absurd.” She argues that her Democratic state senate campaign – a source of consternation for President Donald Trump, who bristled […]