The actor Will Ferrell gate-crashed the Tennis Channel’s commentary booth during a match between Roger Federer and Jeremy Chardy at the Indian Wells Masters tennis tournament. Ferrell seemed to think whoever won the coin toss won the game, and he said he a “back tattoo” of Chardy. Watch the full […] On Monday, stocks were getting destroyed with... “Anchorman 2: The Legend Continues” is in theatres Wednesday. Ahead of the film’s release, we went back to watch our DVD of the original and started reading through the production notes. Something you may not know is that the idea for the cult favourite comedy came to Will Ferrell while […] Local News Anchor Does His Entire Report As Ron Burgundy

Will Ferrell’s been showing up in Durango car commercials to promote his “Anchorman 2: The Legend Continues,” and now his Ron Burgundy character has an ice cream flavour. Ben & Jerry’s released a limited edition butterscotch ice cream with butterscotch swirl, appropriately named “Scotchy Scotch Scotch” — an ode to […] The men of “Anchorman” are back in not one, but two hilarious trailers for the sequel filled with scorpions, Baxter, and a Jesus bus. Paramount released new domestic and international trailers for “Anchorman 2: The Legend Continues” today. This time, the crew is heading to Manhattan to conquer the Global […] Good morning, AdLand. Here’s what you need to know today: Chrysler is rolling out a new slate of commercials for the 2014 Dodge Durango that will star Will Ferrell as his Ron Burgundy character from the movie “Anchorman.” “Anchorman 2: The Legend Continues” is scheduled to be released in theatres […] 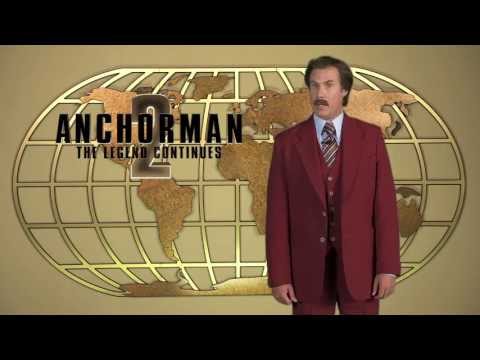 Finally, the much-anticipated teaser trailer for “Anchorman 2” that’s airing before “The Dictator” has made it online. In case you missed the announcement—or have been living under a rock for the past two days—Will Ferrell appeared on “Conan” earlier this week as Ron Burgundy to break news that “Anchorman 2” is finally coming to the big screen. rumours of a sequel have been swirling about for years and […]