Banks are allowed to use customers’ stimulus payments to cover debts. Ally Financial said Wednesday it would forgive overdrafts – without asking for repayment – so clients can receive their whole check. The bank, like most of its peers, has also increased its payment leniency on loans. Visit Business Insider’s […] 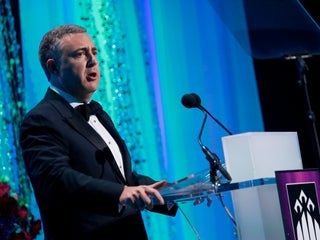 On Tuesday, Ally Invest announced a new investing product: a “cash-enhanced” automated portfolio designed specifically to give investors peace of mind. The portfolio keeps 30% of your funds out of the market and in a buffer that earns high-yield interest. Ally has incorporated an optional “cash buffer” into its robo […] Each year, The Consumer Electronics Show in Las... How technology will affect the entire financial services industry Here’s everything you need to know about the fintech ecosystem

Technology is disrupting the financial services industry — here’s how

THE FINTECH ECOSYSTEM REPORT: The fight-or-flight moment in financial services is here

Tired of your Mercedes? Then step up to an Aston Martin, for about $2,600 a month The Treasury Is Freezing CEO Compensation At AIG And Ally Financial

The Treasury Department announced earlier today that they are freezing CEO pay at GM, AIG, and Ally Financial (formerly GMAC). [credit provider=”Flickr / amanky ” url=”http://www.flickr.com/photos/amanky/1838331340/in/photostream/”] Recently, Ally Bank* wasn’t too pleased when a customer named Nick tried to deposit an e-check issued to him in his nickname, Cole (via/Consumerist). “They informed me that they would never accept a check written to Cole, ever,” Nick told the Consumerist, even if he […] Maybe it’s just us, but a stress test sounds… stressful. [credit provider=”Flickr/d3l” url=”http://www.flickr.com/photos/d3l/2915459570/sizes/z/in/photostream/”] Earlier this week, the Federal Reserve named four banking giants that failed its annual stress test.They were Citigroup, SunTrust, MetLife, and Ally–and they were none too pleased about it. [credit provider=”AP Images”] Top banks impeded a federal inquiry into their foreclosure processes, according to a report released Tuesday, dragging their feet on turning over documents and blocking investigators’ attempts to interview bank employees.The inquiry led to the wide-ranging $25 billion mortgage settlement with the five largest mortgage servicers that […] 10 Once-Bankrupt Companies That Are Primed For A Comeback

[credit provider=”New York Public Library” url=”http://digitalgallery.nypl.org/nypldigital/index.cfm”] This post originally appeared at The Street. You thought these companies were dead. Now they’re ready to come back to life and maybe even thrive. [credit provider=”Flickr/greatkingrat” url=”http://www.flickr.com/photos/greatkingrat/3455906529/sizes/m/in/photostream/”] So, about that massive $25 billion mortgage settlement announced yesterday:Millions of homeowners are probably wondering if and when they’ll get a slice of that pie. The good news is yes, those checks will be coming. [credit provider=”Renzo Salazar / Getty”] Reuters is reporting that the Department of Justice, nearing agreement on a $20-25 billion mortgage abuse settlement with five banks, has reached out to additional banks in a move to broaden the impact of the settlement and increase its total amount.The banks the government has contacted […]