5 Republican senators have poured a total of $25,000 into Katie Britt’s Alabama Senate campaign even though Trump endorsed her challenger, Rep. Mo Brooks

Trump previously slammed Katie Britt, saying she's "not in any way qualified and is certainly not what our Country needs or not what Alabama wants." 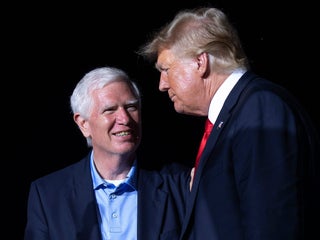 President Donald Trump gloated after his former attorney general, Jeff Sessions, was forced into a runoff in the Alabama Senate primary after Tuesday’s vote. Neither Sessions nor any of his opponents got enough vote to win outright, and Sessions will now face Tommy Tuberville in a runoff to challenge Democratic […] 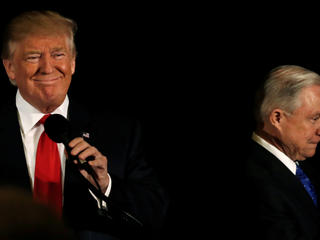 On Thursday, Alabama’s head of elections officially certified the results of the special US Senate election, declaring Democrat Doug Jones the next US senator from Alabama. Secretary of State John Merrill had earlier rejected Roy Moore’s request to delay certification of the election, which took place on December 12. Moore […] Roy Moore says he wants Alabama’s secretary of state to delay certification of the state’s US Senate race results, pending an investigation into what his campaign called “election fraud.” Moore alleges fraud contributed to his defeat in the December 12 election, in which his Democratic opponent, Doug Jones, beat him […] Roy Moore, the Republican Senate candidate who lost the Alabama special election to a Democrat on Tuesday, has not yet conceded. Moore issued a video statement on Wednesday night saying he would wait for Alabama’s secretary of state to certify the results. Roy Moore released a YouTube video on Wednesday […] The Republican Roy Moore has refused to concede the US Senate race in Alabama despite results showing a clear margin of victory for his Democratic challenger, Doug Jones. Moore is holding out hope for a recount, which would likely only take place if the certified votes show a less than […] The Democrat Doug Jones’ upset victory in Alabama on Tuesday provided more reason for Republicans to worry about the 2018 midterm elections. Jones turned out a remarkable number of voters in an “off” year to squeeze out a victory over Roy Moore. Here’s the most remarkable statistic about Tuesday’s election […] Democrat Doug Jones won Tuesday’s special election in Alabama over Republican Roy Moore. Black voters, young people, and well-educated, affluent whites gave Jones the edge he needed. Jones is the first Democrat to hold a US Senate seat in Alabama since 1992. Alabama voters came out in droves on Tuesday […] The Democrat Doug Jones was declared the winner in the Alabama Senate election on Tuesday night; when he’s sworn in, the Republican Senate majority will shrink to just one seat. The election upset could cause problems for President Donald Trump and the Republican Party’s legislative agenda in 2018. Democrats are […] ‘IT’S NOT OVER’: Roy Moore refuses to concede and insists there could be recount Voters in Alabama are sending Democrat Doug Jones to the US Senate. Jones was projected to win the state’s special election Tuesday night. Jones will become the first Democrat elected to the Senate in the deep-red state in more than two decades. The race was close right up to Election […]

Voters in Alabama are deciding whether Republican Roy Moore or Democrat Doug Jones will take the open US Senate seat in their state Tuesday night. The race remained close right up to Election Day, despite a massive sexual-assault and harassment scandal that has rocked Moore’s campaign in recent weeks. President […] Alabama Senate candidate Roy Moore was interviewed by a 12-year-old girl. He has been accused of sexual misconduct with teenage girls when he was in his 30s. The interview stands to be perhaps the last campaign sit-down for the Republican nominee. Former judge Roy Moore has largely avoided campaigning in […] Sean Hannity gives Roy Moore an ultimatum: Explain yourself or get out of the Alabama Senate race

Fox News host Sean Hannity said he would give...