The US Navy’s new pilotless tanker plane just refueled an aircraft carrier fighter jet for the first time, and this is what it looked like

Watch an MQ-25 Stingray drone refuel an F/A-18 Super Hornet, the first time a pilotless plane has refueled a manned aircraft in flight. 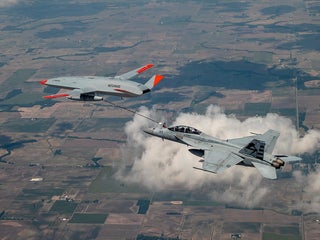 An Airbus A310 aerial tanker successfully underwent a test to autonomously refuel an aircraft to be implemented on the A330 MRTT. The achievement marks the next step in Airbus’ goal to enable autonomy in routine flight operations. Rival Boeing has not been able to achieve the same goal as its […] 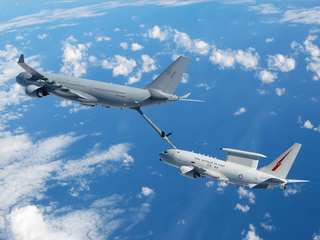 Continued delays on Boeing’s new KC-46 aerial-refuelling tanker have the Pentagon in a tough spot. Problems with the KC-46 could leave Transportation Command, which oversees the US military’s aerial refuelling operations, without enough tankers, the command’s top general said Tuesday. One solution, the general said, may be contracting additional tankers […] The Marine Corps has finally finished investigating a midair collision off the coast of Japan that killed six Marines in December. The collision of an F/A-18D Hornet and KC-130J Hercules occurred when an inexperienced fighter pilot conducted an unusual manoeuvre, lost situational awareness, and hit the back end of the […] ‘I actually don’t care’: Congress has an idea for the Air Force’s next tanker, but the head of the Air Force has something else in mind

The US Air Force got its long-awaited KC-46 tanker this month. But Congress and military planners are already looking ahead to the next kind of tanker. The next thing may not be a single platform, the Air Force chief of staff said this weekend. On January 25, officials from Boeing […] China Central Television (CCTV), a state-run broadcaster, revealed recently that the aircraft has been equipped with a retractable refuelling probe. With aerial refuelling capabilities, the J-20 can extend its reach beyond a reported 1,100 kilometers, giving China the ability to better patrol disputed waterways like the South China Sea. Chinese […]