The annual 9/11 “Tribute in Light” was cancelled on Thursday due to coronavirus health concerns, the National September 11 Memorial and Museum spokesman, Michael Frazier, told the New York Times in a statement. But on Saturday, New York Gov. Andrew Cuomo, Mike Bloomberg, and memorial and museum president, Alice M. […] 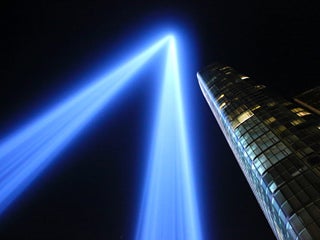 Former New York City Mayor Rudy Giuliani took an unusual approach to commemorate the anniversary of the 9/11 attacks on Wednesday morning – he shared a video clip showing police officers bracing for a riot. The video begins with a rendition of “America the Beautiful,” interspersed with images of police […]

President Donald Trump on Wednesday suggested terrorists would face force even greater than “nuclear power” if they attack the US. During a speech commemorating the 9/11 terror attacks at the Pentagon, Trump said, “If for any reason they come back to our country, we will go wherever they are and […] Ledo Pizza appears to have tweeted, then deleted, a photo of a pizza decorated with olives and pepperoni to look like the American flag on Wednesday, September 11. The tweet was captioned #NeverForget. Ledo Pizza did not immediately respond to Business Insider’s request for comment, and many people on Twitter […]