The Fabulous Life Of Carl Icahn, The Man Who Smoked Wall Street In 2013 ‘>APCarl Icahn and his wife, Gail.

Unless you’ve been living under a rock, you’ve noticed that Carl Icahn has taken every opportunity to shake up Wall Street in 2013.

It’s no shock. He started the year armed with $US10 billion in cash.

The name “Icahn” has meant something on Wall Street since the 1980s, when he gained his reputation as a ruthless activist investor. He did it by taking a controlling interest in companies like TimeWarner, TWA, and Blockbuster.

And even in his 70s, Icahn shows no sign of slowing down. This year he’s made major money out of Netflix, revved up his feud with fellow hedge fund manager Bill Ackman, and picked a fight with Apple.

Like most truly successful Americans, Icahn came from humble origins. Icahn was born in 1936. His father was a synagogue cantor (though apparently an atheist); his mother a school teacher. He attended Far Rockaway High School in Queens.

He worked his way into Princeton, where he majored in Philosophy. Dreyfus merged with Mellon in 1994. The big break came in 1978, when a bet on Tappan, a stove maker, grossed $US3 million for the firm. Icahn began gaining a reputation for being a 'corporate raider.' He'd take a controlling stake in a firm and force extreme changes in the company's structure (like spinning off different units). He forced some firms to pay him 'greenmail' money to keep him away.

The high point in the '80s, at least, was his takeover of TWA. Having purchased the company in 1985, he took it private three years later in a $US650 million share-buyback plan.

However, the move also saddled the airline with hundreds of millions in debt. In 1992 it declared bankruptcy, and Icahn left the firm.

In the late '90s, Icahn suffered a rare defeat after failing to takeover Marvel Entertainment. ''I have framed articles of every deal I've ever done,' Mr. Icahn told The New York Times in 1998. 'In all honesty, this is one frame I'm considering taking down.'

The fun part about Icahn is that at any given moment, he's plotting some crazy scheme. Google 'Icahn' and any year, and you get something juicy.

Icahn rechartered his holdings to Icahn Enterprises in 2007. The company consists of:

After six decades on Wall Street, the number of firms in which Icahn has owned a stake or served on the board is staggering: It should be no surprise that a man of his stature has made some enemies. In his case, it's hedge fund superstar Bill Ackman. The feud between Ackman and Icahn dates back to 2004. One of the weirdest things about it? It all started over only $US4.5 million.

In 2003 Bill Ackman's first hedge fund, Gotham Partners, had just blown up and he was being investigated by then-Attorney General Eliot Spitzer. The investigation was eventually dropped, but this definitely wasn't the best time in Ackman's career.

He needed to do a deal. Specifically, he wanted to sell Hallwood Realty, a company whose stock was trading about $US60 a share but Ackman believed it was worth $US140. So he called Icahn.
Source: NYT To make sure everything was on the up and up, Ackman included some legal provisions in his contract with Icahn. First the contract stipulated that if there was any legal trouble, the loser would pay the winner's legal fees. Second it said that if payment was delayed, Icahn would owe Ackman a lot of interest.

In 2004, Hallwood merged with another company, for $US137 a share. That meant Icahn made some good money on the deal, so Ackman called him for Gotham Partners' cut.
Icahn said he wouldn't pay, but a Court decided against him in 2011 and he ended up paying Ackman $US9 million.

There was a lot of ugly name-calling involved and to this day the two do not like each other. Most recently, Icahn said of Ackman:

And on Ackman's pledge to give proceeds of his latest short, Herbalife to charity, Icahn said: 'He talks about charity. That's complete bullshit!'

During the lawsuit Ackman had this to say about Icahn:

'The guy is a shakedown artist,' Mr. Ackman sneers. 'His word is worthless.' With one Tweet in August announced a new stake in Apple, he caused a huge spike in the companies' shares.

Although the effect has worn off a bit. And indeed, his recent track of intervention is mostly solid. He also founded his own charter schools in the Bronx. That philanthropy -- and a legendary wit -- explain why ultimately, people usually end up falling for the kid from Queens. Check out his stand up below. 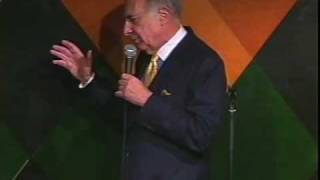 Oh by the way. Ichan plays a a part in this story too.