From cutting all ties with Trump to pulling political donations, here's how corporate America has responded to the Capitol insurrection 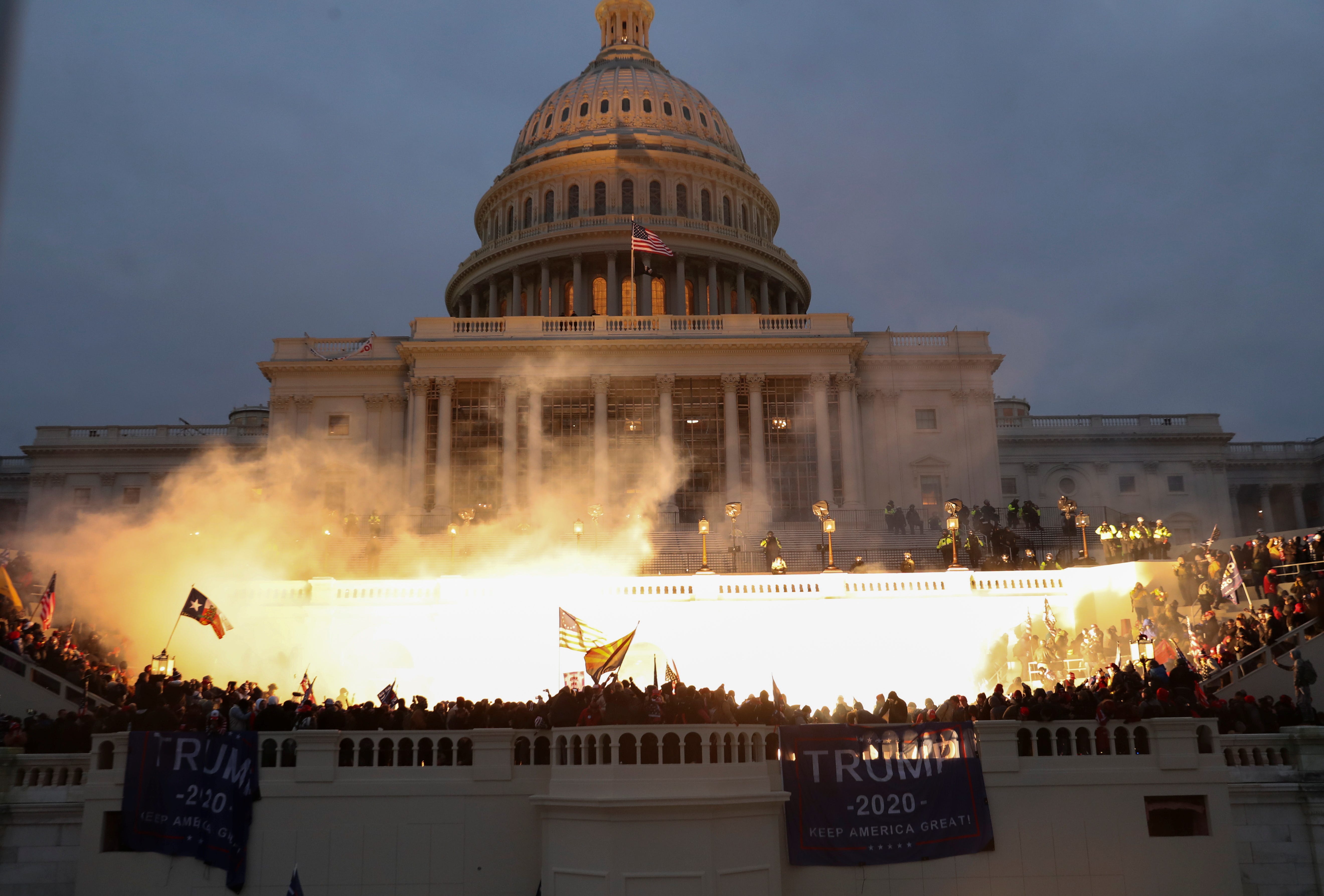 REUTERS/Leah MillisThe US Capitol during riots on January 6.

Since rioters stormed the US Capitol on January 6 in a desperate bid to overturn the presidential election result, top US firms have been scrambling to distance themselves from President Donald Trump and his supporters.

In the immediate aftermath of the insurrection, business leaders were quick to condemn the rioters. Then, in the days that followed, they backed up those words with actions.

Some have cut off political funding, while others, including banks and social media giants, severed their ties to President Donald Trump.

Here’s how corporate America is responding to the Capitol siege.

‘The antithesis of democracy’

Both companies and individual business leaders issued statements condemning what had happened in the US Capitol.

The language they used varied, and some gave more personal responses than others.

Facebook CEO Mark Zuckerberg said the attacks marked “a dark moment in our nation’s history,” Google CEO Sundar Pichai said they were “the antithesis of democracy,” and American Express Chairman and CEO Stephen J. Squeri said they were an “egregious assault on our democracy.”

Reddit cofounder Alexis Ohanian was one of the first business leaders to speak out, describing the rioters as “domestic terrorists.”

Some of the responses were more surprising. Blackstone chairman, CEO, and co-founder Stephen Schwarzman, a longtime Trump ally who previously defended the president’s election lawsuits, said he was “shocked and horrified” and that “there must be a peaceful transition of power” to President-elect Joe Biden.

“This is not law and order. This is chaos. It is mob rule. It is dangerous. This is sedition and it should be treated as such,” Timmons said.

As the events of Wednesday unfolded, social media giants began banning Trump for their platforms.

They starting by removing a video posted by Trump on Facebook, Twitter, and YouTube during the insurrection, where he failed to condemn the rioters, called them “very special,” and continued to baselessly claim that the election was fraudulent.

Facebook then blocked Trump “indefinitely,” adding that the ban would last at least until the end of his presidency on 20 January, and Twitter followed suit the next day by permanently suspending Trump’s account.

Snapchat has said it will permanently ban Trump, and both Twitch and YouTube have limited his use of their platforms.

It wasn’t just Trump who was banned from social-media platforms. These companies targeted some of his more extreme supporters, too.

Twitter purged 70,000 accounts associated with QAnon, a far-right conspiracy theory that baselessly claims Trump is working to dismantle a network of elite child-abusers who run world affairs. Supporters of the movement were seen on the front line during the Capitol siege, including a QAnon influencer dubbed the “Q Shaman.”

After Apple and Google pulled Parler, a network popular with Trump supports, from their app stores, Amazon cut ties with the platform. Amazon Web Services (AWS) had hosted Parler’s website, so the move took Parler offline. CEO John Matze believes it may never come back.

Pulling the plug on political donations

Starting over the weekend, companies then went a step further and announced major changes to their political contribution policies.

Some companies said they would cut off donations specifically to the 147 Republican lawmakers who opposed Biden’s certification as president. These included Walmart, Amazon, Nike, Morgan Stanley, Dow, and AT&T.

Meanwhile, other companies including JPMorgan, Citibank, Facebook, Microsoft, Boeing, Visa, Deloitte, and Google have said they’re pausing all political contributions â€” to both Democrats and Republicans.

Berkshire Hathaway Energy, Ford, and Bank of American told Popular Information they would review donations on an individual basis.

The greeting card company asked Republican Senators Josh Hawley and Roger Marshall, who both voted against Biden’s certification, to refund its political donations. It’s unknown yet whether they will.

Political donations aren’t the only way companies give money to politicians. When politicians double up as businesspeople, companies can essentially be funding them by spending money at their enterprises.

That’s something Lime never wants to do for Trump. The e-scooter startup has vowed never to give money to businesses connected to Trump or Jared Kushner, Trump’s son in law, and has scratched Trump’s properties from its list of approved corporate travel hotels for its 600 employees.

E-commerce platform Shopify removed accounts associated with Trump, including his official campaign store. Sites like shop.donaldjtrump.com and trumpstore.com can no longer be accessed.

The Professional Golfer’s Association (PGA) of America, meanwhile, pulled its 2022 Championship from Trump’s New Jersey golf course. The PGA had previously held events at various Trump-owned golf clubs â€” although in 2015, it cancelled an event due to be held at one, after the then-presidential candidate referred to Mexicans as “rapists” and people who are “bringing crime” and “bringing drugs.”

Not every company has taken a hardline approach. Mike Lindell, CEO of MyPillow, continued to stand by Trump,

Banks are also cutting ties with Trump. Deutsche Bank and Signature Bank said they would no longer provide banking services to Trump or the Trump Organisation.Professional Bank followed suit days later, just three years after it lent Trump $US11.2 million in to purchase a home next to his Mar-a-Lago club for his sister.

And it’s not just businesses freezing Trump out.

The City of New York is ending its business contracts with the Trump Organisation, which manages a golf course in the Bronx as well as two ice skating rinks and the carousel in Central Park. These concessions give the company an annual revenue of around $US17 million.

Mark Levine, a Democratic New York City council member, told Insider the Trump Organisation’s connections with the four businesses was “a stain on the city.” Levine had been pushing the city to cut ties for years, and formerly chaired its parks and recreation division. The Trump branding was likely detracting people from visiting the attractions, he said.