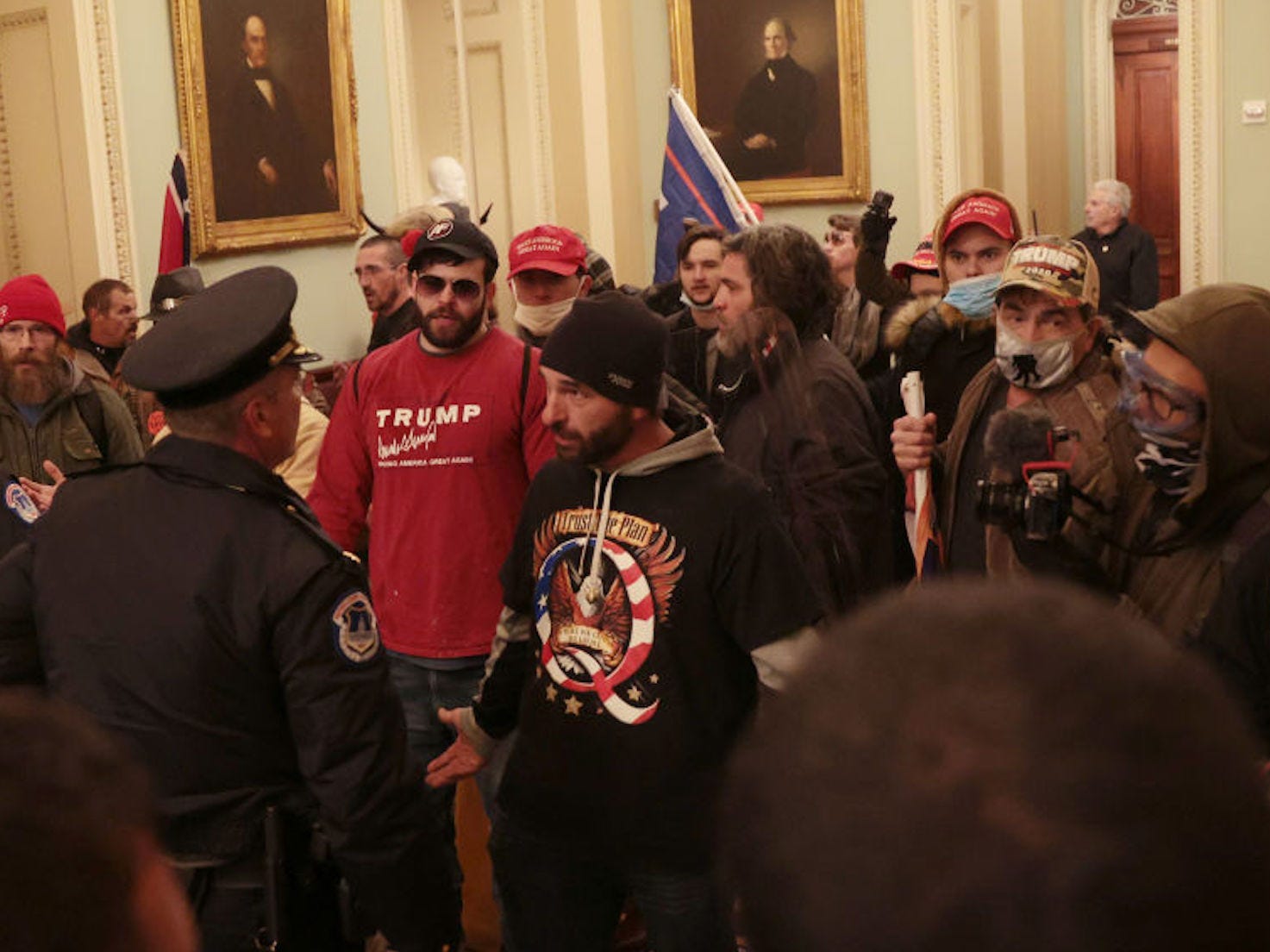 Win McNamee/Getty ImagesProtesters interact with Capitol Police officers in the Capitol on Wednesday.

When pro-Trump rioters stormed the US Capitol on Wednesday, the far-right corners of the internet had been ready for weeks.

The “Stop the Steal” movement, which has baselessly alleged that President Donald Trump actually won the presidential election and that President-elect Joe Biden’s win was fraudulent, used the internet to organise the violent coup attempt.

But the voter-fraud conspiracy theories peddled by Trump, his allies, and his supporters since the election were amplified by and, in most cases, originated from powerful figures in the QAnon ecosystem. 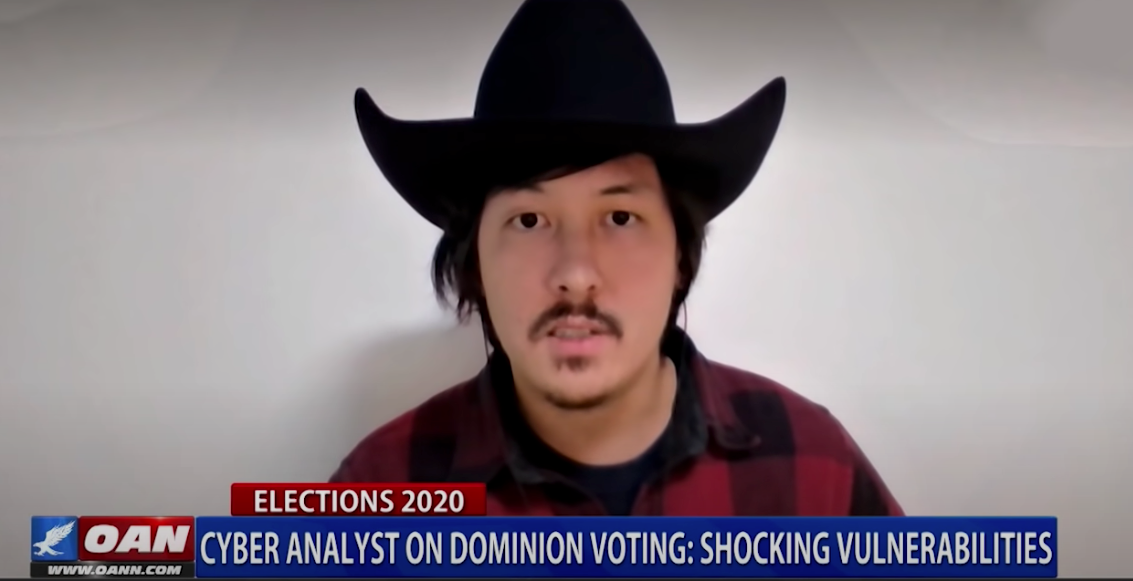 OAN/YouTubeRon Watkins was interviewed by One America News Network’s Chanel Rion as a ‘cyber analyst.’

QAnon, the baseless far-right conspiracy theory claiming that Trump is fighting a “deep-state cabal” of pedophiles and human traffickers, has become what extremism experts call a big-tent theory, as it has evolved into a collection of theories that position Trump as a martyr, a victim, and a saviour all at once.

Though the Cybersecurity and Infrastructure Security Agency called the 2020 election the “most secure” in US history, QAnon helped sow the seeds of doubt among Trump’s supporters, setting up the outrage that led to Wednesday’s chaos at the Capitol.

Watkins, who, along with his father, has been suspected of being behind “Q,” was amplifying a conspiracy theory that was already circulating among QAnon followers. NBC News reported on November 13 that a nonpartisan nonprofit called Advance Democracy found that one in seven tweets using the #Dominion hashtag since November 5 originated from QAnon-supportive accounts.

Watkins said he hoped to talk to Trump’s attorney Rudy Giuliani about the conspiracy theory, and he went on to spread it on One America News Network, a pro-Trump propaganda news network, on November 12.

After the segment, Trump tweeted about the Dominion conspiracy theory. He alleged, without evidence, that Dominion “DELETED” more than 1 million votes in the US, citing OAN. So began the barrage of misinformation about Dominion from the president and his allies that fuelled the “Stop the Steal” movement.

Lin Wood and Sidney Powell, two QAnon-espousing attorneys who were supporting Trump’s legal team’s efforts to overturn the election result, also espoused the conspiracy theory. Trump’s allies have recently distanced themselves from Powell and Wood, whose Twitter account was suspended on Thursday for violating the company’s policies. Powell cited Watkins in an unsuccessful lawsuit asking that Georgia overturn its election result. 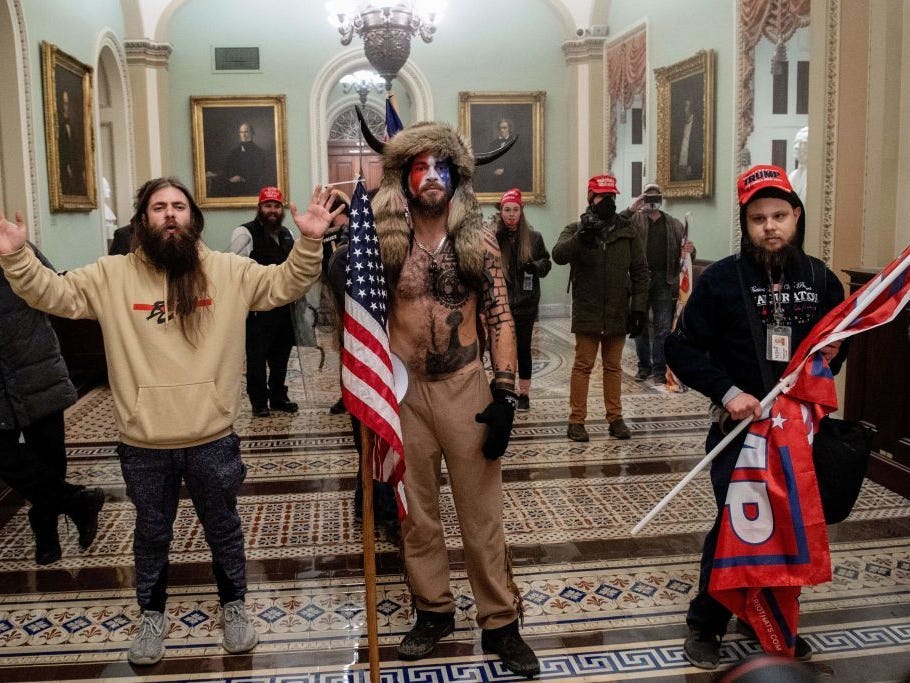 Saul Loeb/AFP/Getty ImagesSupporters of President Donald Trump including Jake Angeli, centre, a QAnon supporter known for his painted face and horned hat, in the Capitol on Wednesday.

Influential QAnon figures, including Watkins, had been encouraging a January 6 protest in Washington, DC, on social media in the days before the congressional confirmation of the election result.

More than half of QAnon-related Twitter accounts, or about 20,800, tweeted about January 6 in the days before the riot, Advance Democracy told BuzzFeed News. Many of them discussed the possibility of sieging the US Capitol building, as Insider’s Isobel Asher Hamilton reported.

And according to USA Today, Advance Democracy found that from January 1 to Wednesday, 1,480 tweets from accounts with QAnon ties used violent language. On the right-wing app Parler, QAnon-related accounts called on protesters to arm themselves, baselessly claiming that counterprotesters planned to kill them, USA Today reported.

QAnon has increasingly become mainstream during the pandemic â€” the movement’s adherents have appeared at rallies against COVID-19 face masks and human trafficking. QAnon believers have attended Trump rallies in QAnon apparel, which continues to be sold on Amazon.

It was not surprising to see QAnon paraphernalia on Wednesday, from the march from the White House to the Capitol through the siege of the building. One video shared on Twitter by the HuffPost politics reporter Igor Bobic showed that when rioters entered the Capitol, they were led by a man wearing a QAnon shirt.

Leaders in the QAnon movement attended the rally. Jake Angeli, who’s known as the “Q Shaman” and wears red, white, and blue face paint and a horned hat, took photos on the Senate dais and walked around the Capitol holding a megaphone.

Ashli Babbitt, a Trump supporter who died during the rampage on the Capitol, had reportedly tweeted about QAnon before the riot.

Extremism experts have repeatedly warned that the growth of far-right extremist groups and conspiracy theories could lead to increasing violence.

QAnon has already displayed a propensity for violence, one that has only been reinforced by Wednesday’s events.

In 2019, the FBI field office in Phoenix said in an internal memo that the conspiracy theory may pose a domestic terrorism threat. People espousing QAnon beliefs have been accused or found guilty of crimes including murder and kidnapping.

In November, after Biden was declared the winner of the election, Joan Donovan, the research director of the Shorenstein Centre on Media, Politics and Public Policy at Harvard University, told Insider that the QAnon movement would continue to mobilize. 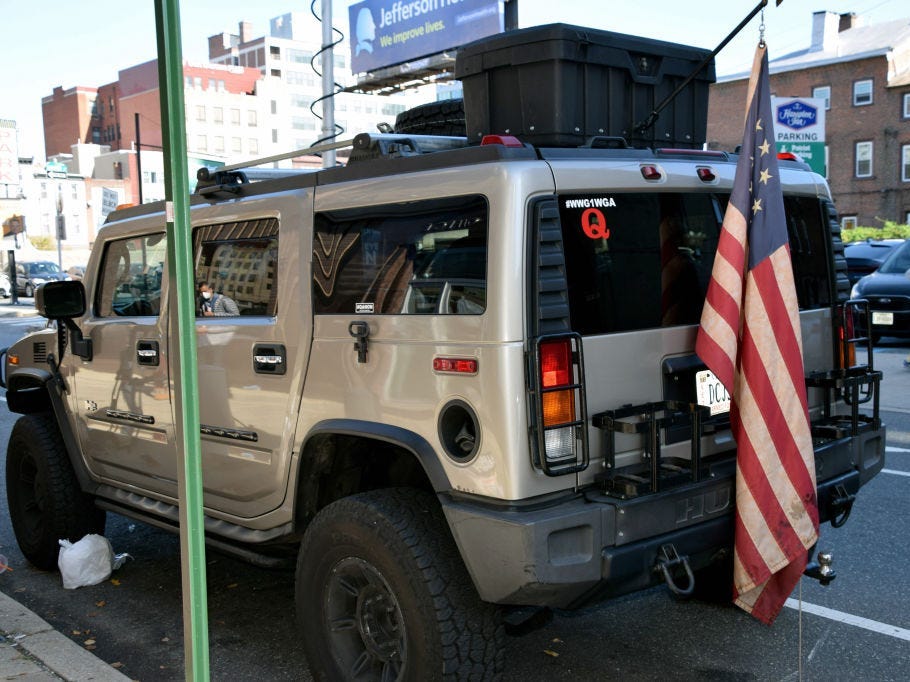 The Asahi Shimbun via Getty ImagesA vehicle with a QAnon sticker in Philadelphia on November 6.

That mobilisation was made clear in the weeks after the election.

Two men were arrested on firearms charges in Philadelphia on November 6; authorities say they parked a Hummer full of ammunition outside the Philadelphia Convention Centre, where election officials were counting ballots. The truck was adorned with a QAnon sticker and had a QAnon hat inside. Court documents obtained by The Philadelphia Inquirer said the men drove to Philadelphia to “straighten things out” at the ballot-counting centre after Trump and his allies continued tweeting baseless claims about vote-counting.

QAnon is trying to distance itself from the Capitol siege

Despite QAnon’s association with violence, many QAnon adherents, including Powell, baselessly blamed Wednesday’s riot on “antifa,” the anti-fascist movement. On Parler, Powell said, without evidence, that she thought “this was planned” and that members of Congress, many of whom were evacuated when the rioters breached the building, watched “America burn from lawless Antifa and BLM.”

Jordan Sather, a QAnon social-media influencer whose YouTube channel “Destroying the Illusion” has been banned for violating policies about COVID-19 misinformation, told his 73,000 Parler followers that “provocateurs” had pretended to be Trump supporters during the riot. There is no evidence supporting that claim.

Sather and other QAnon supporters on Parler still maintain that Trump will be inaugurated on January 20.