Insurrectionists who posted social media footage of the Capitol riots are claiming to be journalists in their legal defenses, report says 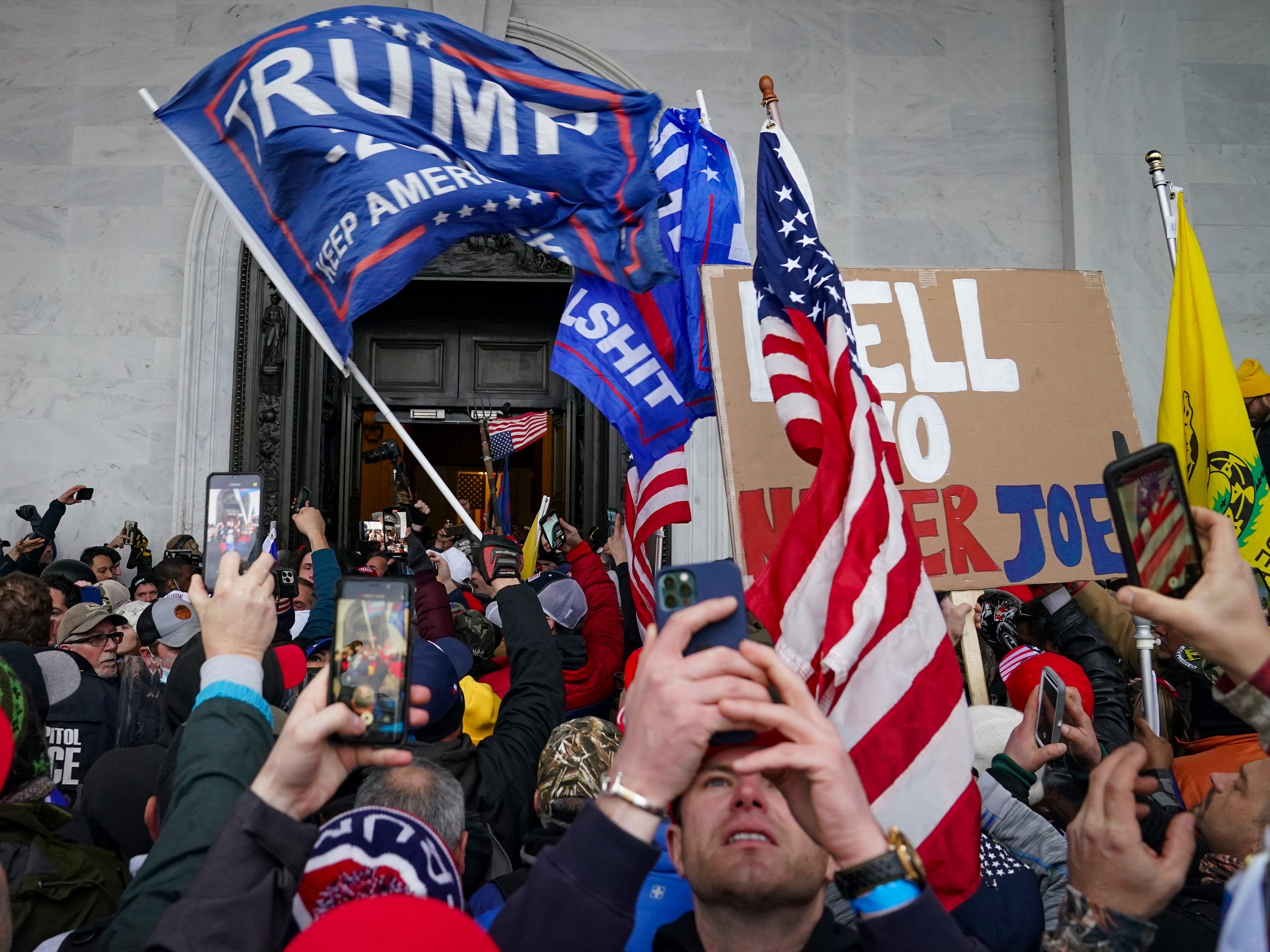 John Minchillo/APIn this Jan. 6, 2021, file photo, Trump supporters gather outside the Capitol in Washington. Some people charged with storming the U.S. Capitol on Jan. 6 are claiming they were only there to record history as journalists, not join a deadly insurrection.

Several defendants charged in the Capitol riots have self-identified as journalists in a bid to justify their attendance at the deadly insurrection, according to the Associated Press.

Individuals who might have posted potentially self-incriminating photographs or videos of them storming the Capitol are claiming they were only there to “record history” and absolve themselves of criminal responsibility, AP reported.

At least eight of those charged with the Capitol siege have claimed to be journalists or documentary makers to mount a First Amendment free speech defense, experts told the news agency.

Read more:
Trump and his advisors are shrugging off DOJ’s Capitol riot probe. But they see danger in the Georgia and New York investigations.

One defendant, Shawn Witzemann, claimed that he was only inside the Capitol to live stream the protests, according to court records.

“I seek truth. I speak to sources. I document. I provide commentary. It’s everything that a journalist is,” he said in an interview with a New Mexico television station.

His YouTube page – “the Armenian Council for Truth in Journalism” – has just over 300 subscribers, his attorney told AP. Witzemann is charged with violent entry and disorderly conduct on Capitol grounds.

Another defendant, Andrew Morgan, cited a small YouTube channel as justification for his attendance.

In his legal defense, Morgan referred to himself as “an independent journalist and civil rights auditor.” His YouTube page – “Political Trance Tribune” – has around 3,600 subscribers.

Morgan shared a video of himself participating in the insurrection on the page. In the clip, court documents show, he can be heard yelling, “send helmets forward.”

Other fringe platforms, such as”Insurgence USA” and “Thunderdome TV,” have also been named by defendants, AP said.

Nicholas DeCarlo claimed that he and another alleged rioter, Nicholas Ochs, are journalists for an online forum called “Murder the Media News,” the Los Angeles Times said.

A self-employed “documentarian,” John Earle Sullivan, has also used the legal defense that he was at the riots for journalistic reasons, the news agency reported.

He is accused of saying, “Let’s burn this s–t down,” while breaching the Capitol’s security barrier, according to an affidavit submitted to the US District Court for DC.

Lucy Dalglish, the dean of the University of Maryland’s Philip Merrill College of Journalism, told the Associated Press that these legal defenses are unlikely to stand in court. Journalists need to be credentialed and cannot claim to be reporting if there is evidence to suggest they were encouraging the violent mob, she told the news agency.