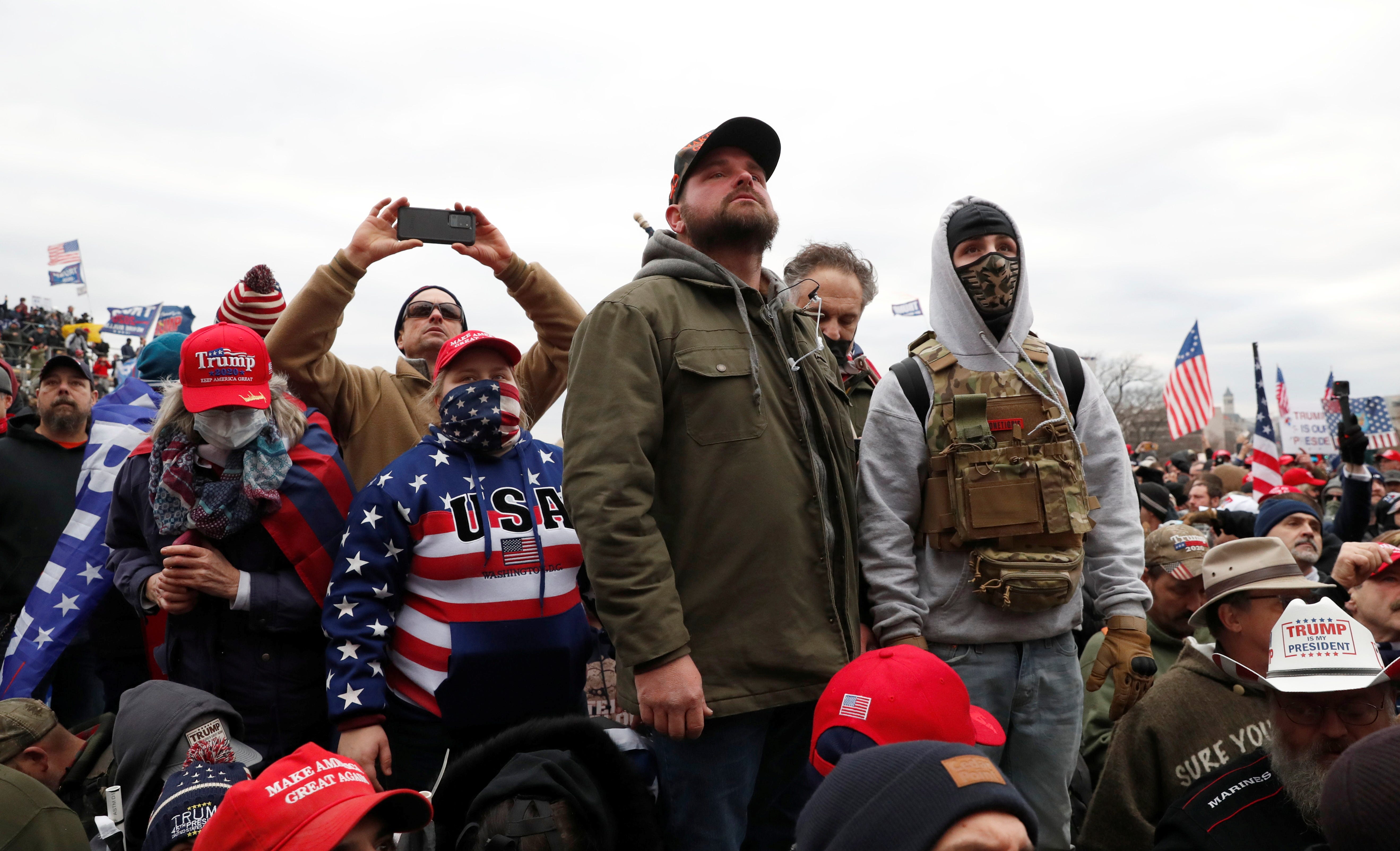 Shannon Stapleton/ReutersPro-Trump protesters look on during clashes with Capitol police at a rally to contest the certification of the 2020 U.S. presidential election results by the U.S. Congress, at the U.S. Capitol Building in Washington, U.S, January 6, 2021.

A Kansas federal judge has brushed off a defense from a Proud Boys member suspected of participating in the Capitol riot that he was just doing what President Donald Trump instructed.

Prosecutors say William Chrestman, a member of the extremist group from Kansas, is accused of joining the deadly storming of the Capitol on January 6. He has been charged on numerous counts, including conspiracy to civil disorder, threatening to assault federal law enforcement, and entering a restricted area with a weapon.

According to a court filing, Chrestman was caught on video several times during the event, and while outside the Capitol complex encouraged crowds to “take your house back” – an apparent reference to the Capitol. Prosecutors say footage also shows him shouting at police officers: “You shoot and I’ll take your f—ing ass out!”

He appeared to be wielding an ax handle or club in the footage, the filing said. At one point, inside the Capitol, he used it in an attempt to prevent police from closing metal barriers to seal off parts of the building, prosecutors said.

‘The American head of state directed a specific action’

Chrestman is one of several Proud Boys members who have been charged in connection with the riots, including the group’s leader Enrique Tarrio. Chrestman has been referred to in another court filing as the leader of the Kansas City Proud Boy cell, the Associated Press reported.

As Insider’s Sonam Sheth has noted, many insurrectionists have touted the idea that Trump put them up to it. And according to Politico, the argument is now regularly showing up in court.

In a filing aimed at securing Chrestman’s pretrial release last week, his lawyers Kirk Redmond and Chekasha Ramsey argued that on January 6, “Trump told the assembled rabble what they must do,” and that they merely followed his instructions.

This, the lawyers argued, means that he has a strong potential defense and therefore is not a flight risk.

“The American head of state directed a specific action,” they argued. “Those who obeyed him have a viable defense against criminal liability.”

The lawyers also argued that Chrestman does not present a danger to the public because the Proud Boys are now “enfeebled” since Tarrio’s arrest, and that Chrestman has got rid of his weapons. They said the arrest has given their client “clarity of perspective.”

Much of their argument also centered around Trump’s influence over the Proud Boys.

“Only someone who thought they had an official endorsement would even attempt such a thing,” the lawyers said. “And a Proud Boy who had been paying attention would very much believe he did.”

They noted the infamous Trump instruction, made during last September’s presidential debate, for the Proud Boys to “stand back and stand by,” and cited a New York Times opinion piece arguing this suggested “the implicit approval of the state.”

Melina Mara/The Washington Post via Getty ImagesPresident Donald Trump speaks during the first presidential debate with Joe Biden on September 29, 2020, when he told the Proud Boys to ‘stand back and stand by.’

They also quoted comments from Senate Minority Leader Mitch McConnell made after the impeachment trial, when he said the attackers “believed they were acting on the wishes and instructions of their president.”

Judge Beryl Howell was unimpressed by the argument, Politico reported.

“This purported defense, if recognized, would undermine the rule of law,” she told a video bail hearing on Tuesday, according to Politico.

“If President Trump ordered or instructed a member of the Proud Boys [to] go off and murder somebody and someone went off and did that, it follows that … would immunize them from liability for that criminal act?” she said, as reported by Politico.” In effect, isn’t that what your argument is saying?”

Though Chrestman had been cleared for pretrial detention at home, Howell reversed that decision on Sunday, Politico reported.

At the conclusion of the hearing, she said that Chrestman “cannot be trusted to abide by any condition for release the court might impose instead of pretrial detention,” according to the outlet. “I don’t find this case to be a close call at all.”