What I saw during a visit of the Capitol just days after the deadly Trump-incited riot: Smashed windows, discarded escape hoods, and lots of National Guard 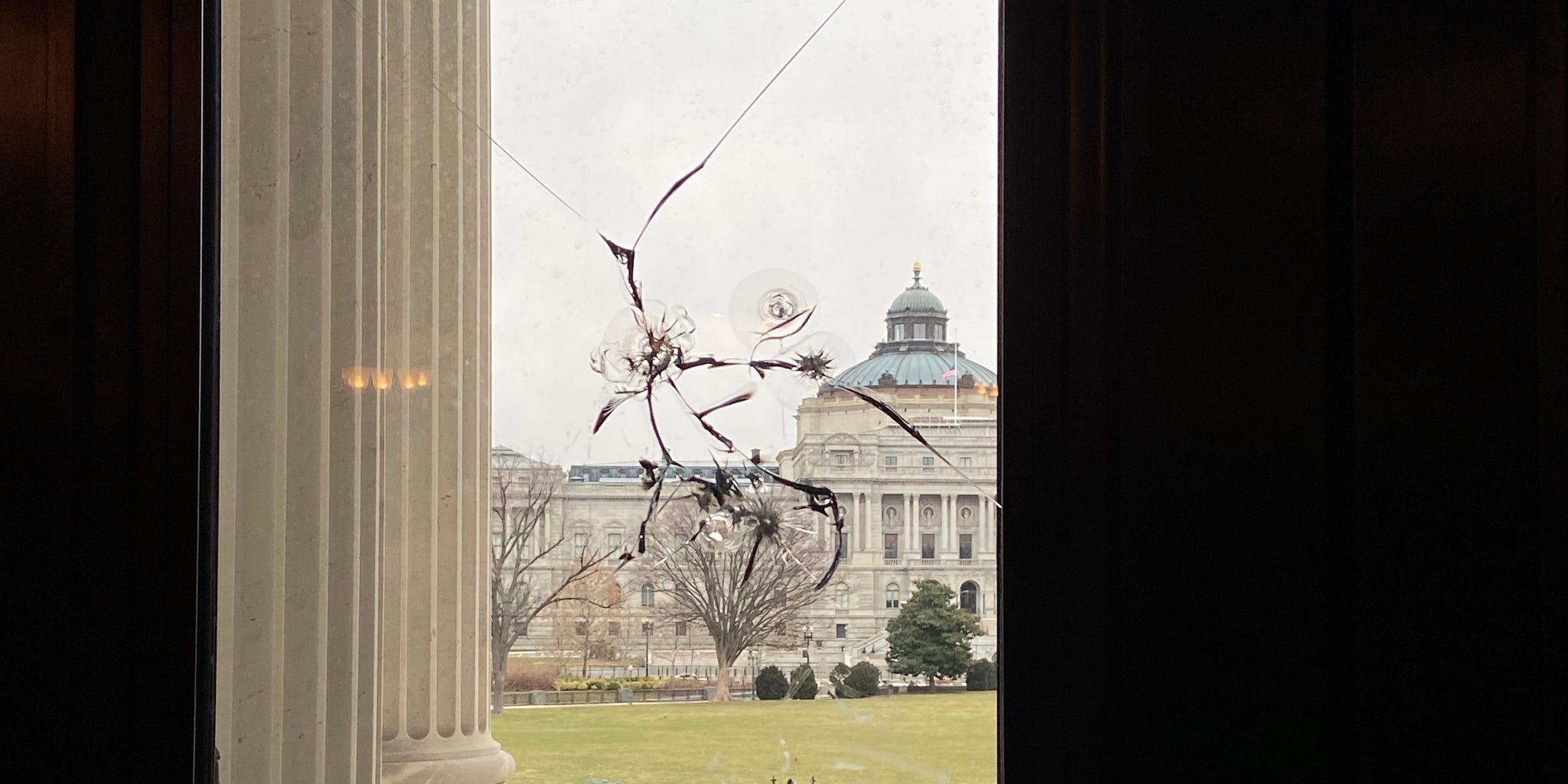 Kayla Epstein/InsiderA smashed window just off the House chamber that looks out on the Library of Congress.

If you spent last week in the wilderness with no access to the internet or cable news, and stepped into the Capitol building on Monday, you might not think things were all that different, maybe just a little emptier than usual.

When I visited the complex that afternoon, the ornate tiled floors gleamed, the familiar portraits of politicians past glared down from the walls, the Capitol rotunda glowed in all its intended glory.

Sporting my press badge, which gives me broad access to the Capitol, I breezed through security and made my way through the familiar labyrinth of hallways and tunnels unimpeded, like I would on any other day of reporting.

But of course, there were eerie hints that something was amiss.

Several windows in the normally immaculate Senate were boarded up with plywood, their shutters smashed while dirty handprints smudged the adjacent walls. A ribbon of forgotten police tape fluttered from the door of the Senate Parliamentarian’s office. A large crack blistered a window that normally provides a lovely view of the Library of Congress. And a pile of emergency hood wrappers lay discarded just outside the Senate gallery.

Also, the National Guard was everywhere.

[Read more: ‘It was degrading’: Black Capitol custodial staff talk about what it felt like to clean up the mess left by violent pro-Trump white supremacists]

Last Wednesday, violent supporters of President Donald Trump besieged the Capitol, smashing through windows and forcing their way inside the hallowed building in a failed attempt to stop lawmakers from certifying the electoral college results and making Joe Biden’s victory official. They made their way up to the House and Senate chambers â€” in the latter case, just seconds after lawmakers had been evacuated â€” and left a trail of destruction in their wake. The Capitol’s workers, joined by at least one congressman, toiled through the night to clean up after them.

After watching the horrors unfold on television and social media last week, I wanted to see how much had changed about entering the Capitol. On Monday, I paid a visit and learned how much had â€” and hadn’t â€” changed. Here’s what I saw.

A tall, black fence with concrete barriers at the base now surrounds the entire Capitol grounds, with only a couple entrance points. Normally, the grounds are open to the public. Kayla Epstein/InsiderThe US Capitol is now surrounded by a tall black fence that circles the entire grounds.

My press badge allowed me to walk into one of the few entry points in the fence, which was guarded by Capitol police. Once I got through that fence, everything was strangely normal.

I entered the Capitol through the same side door on the House side I often take, and was greeted by just a couple of Capitol police officers, which is often the case. I sent my backpack through the usual X-ray machine and walked through the usual metal detector, and went on my way.

I’d expected to face far more security, increased checks, and restrictions on my movements, but Capitol police and a House staffer told me I could move about as normal.

The damage was more visible on the Senate side of the Capitol. While most of the Senate looked totally normal, there were telltale signs of a riot. Here are a window and a door that had the glass shattered by rioters last week. 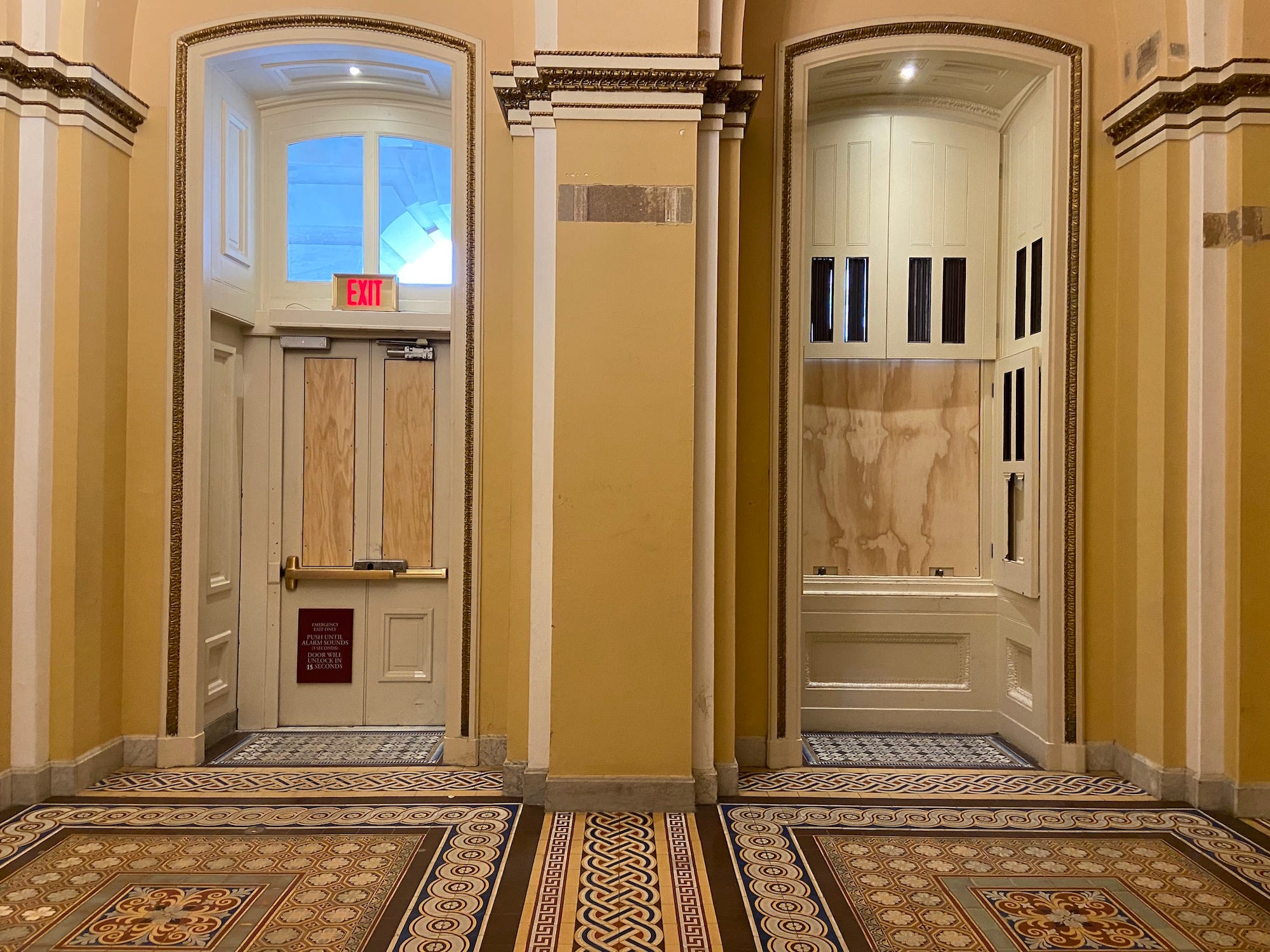 Kayla Epstein/InsiderA window and a door in the US Senate, not far from the chamber, are boarded up after rioters smashed the glass.

The shutters that framed these Senate windows were destroyed. 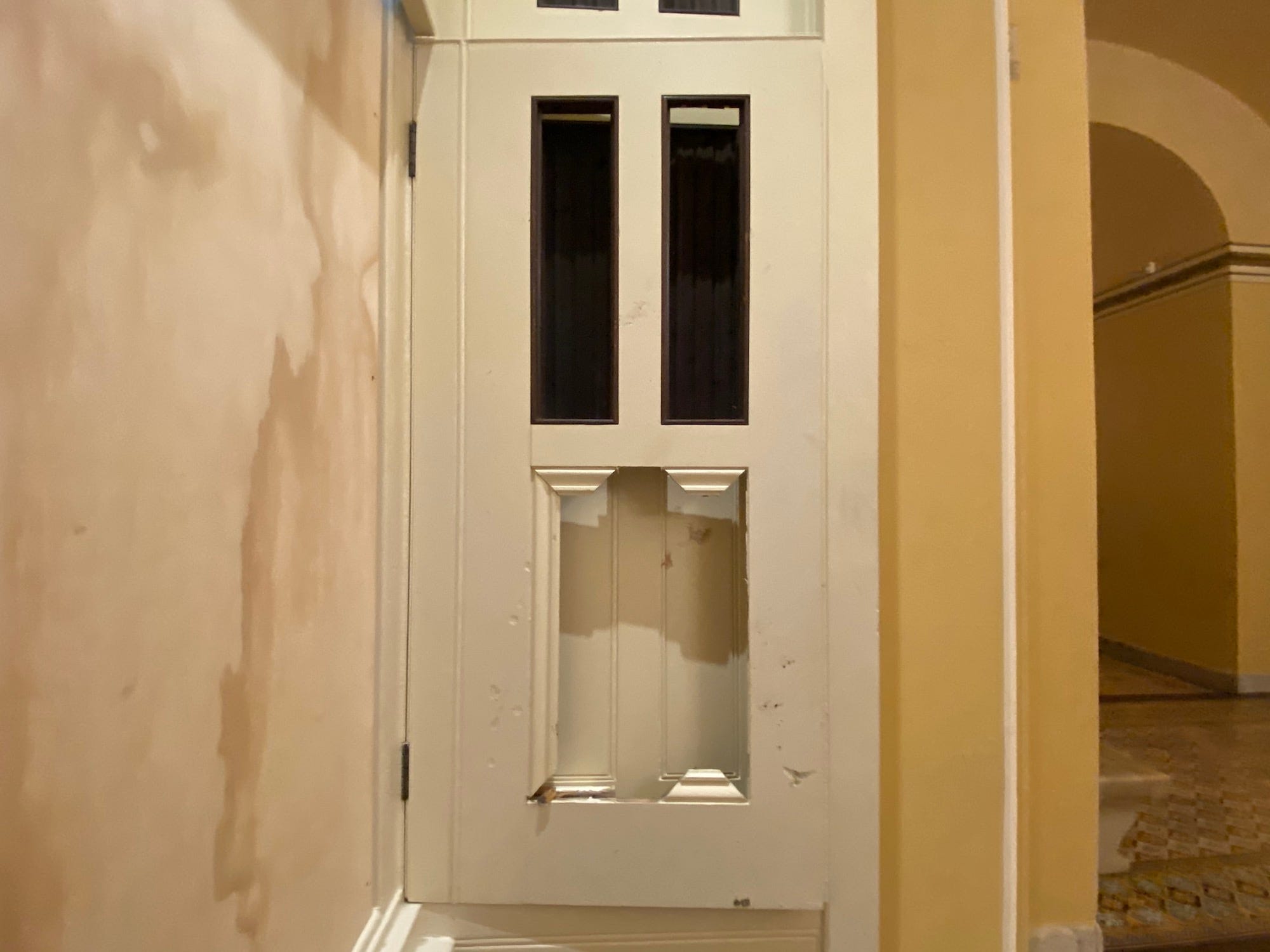 If I looked closely at the shutters, I could see these circular dents, possibly where rioters tried to break through. 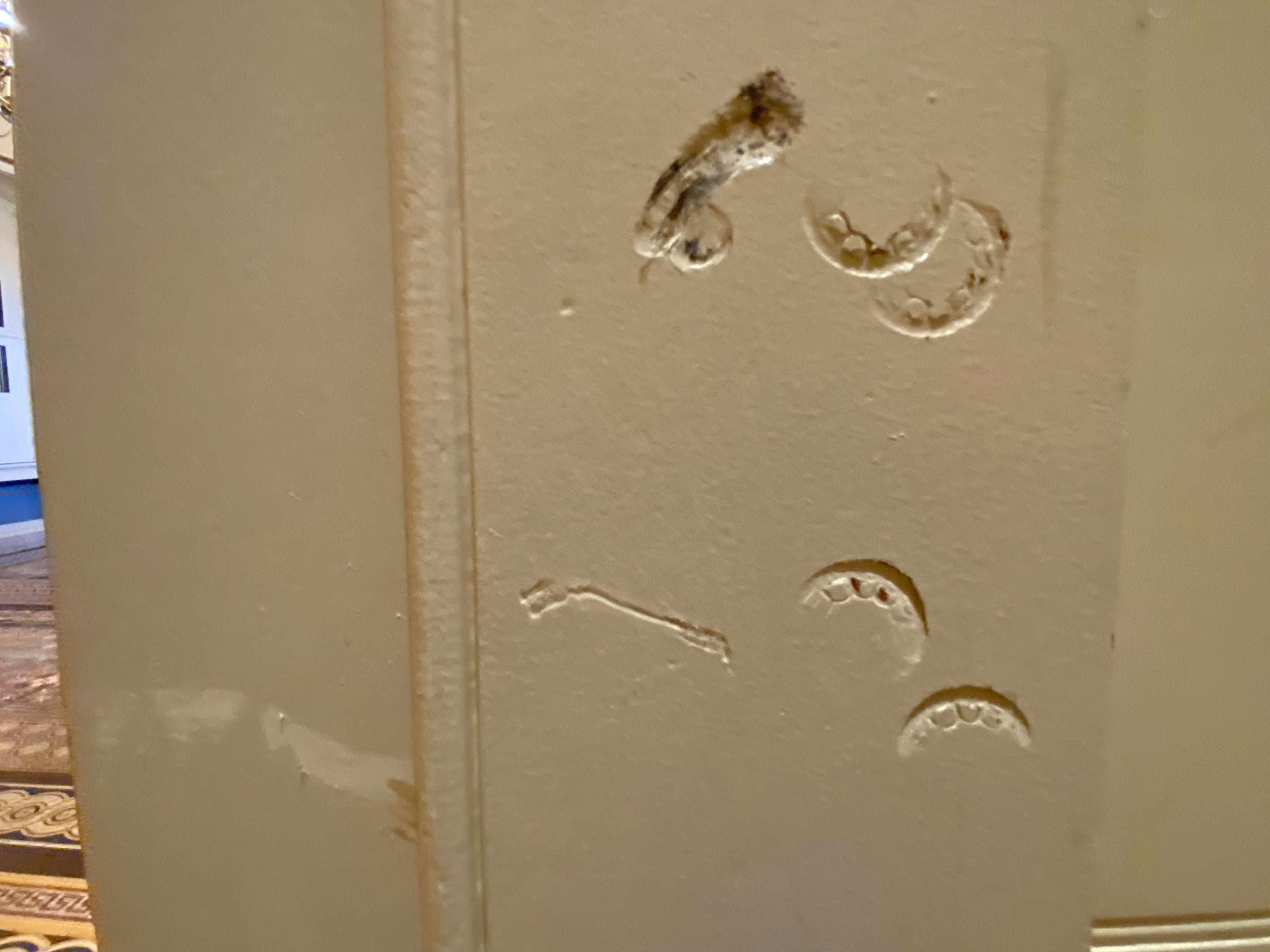 Kayla Epstein/InsiderDents in the shutters that frame broken windows in the Senate.

The most disturbing thing I found touring the Capitol: a pile of used and unopened escape hoods piled up on the third floor of the Senate, just outside the public and press galleries. 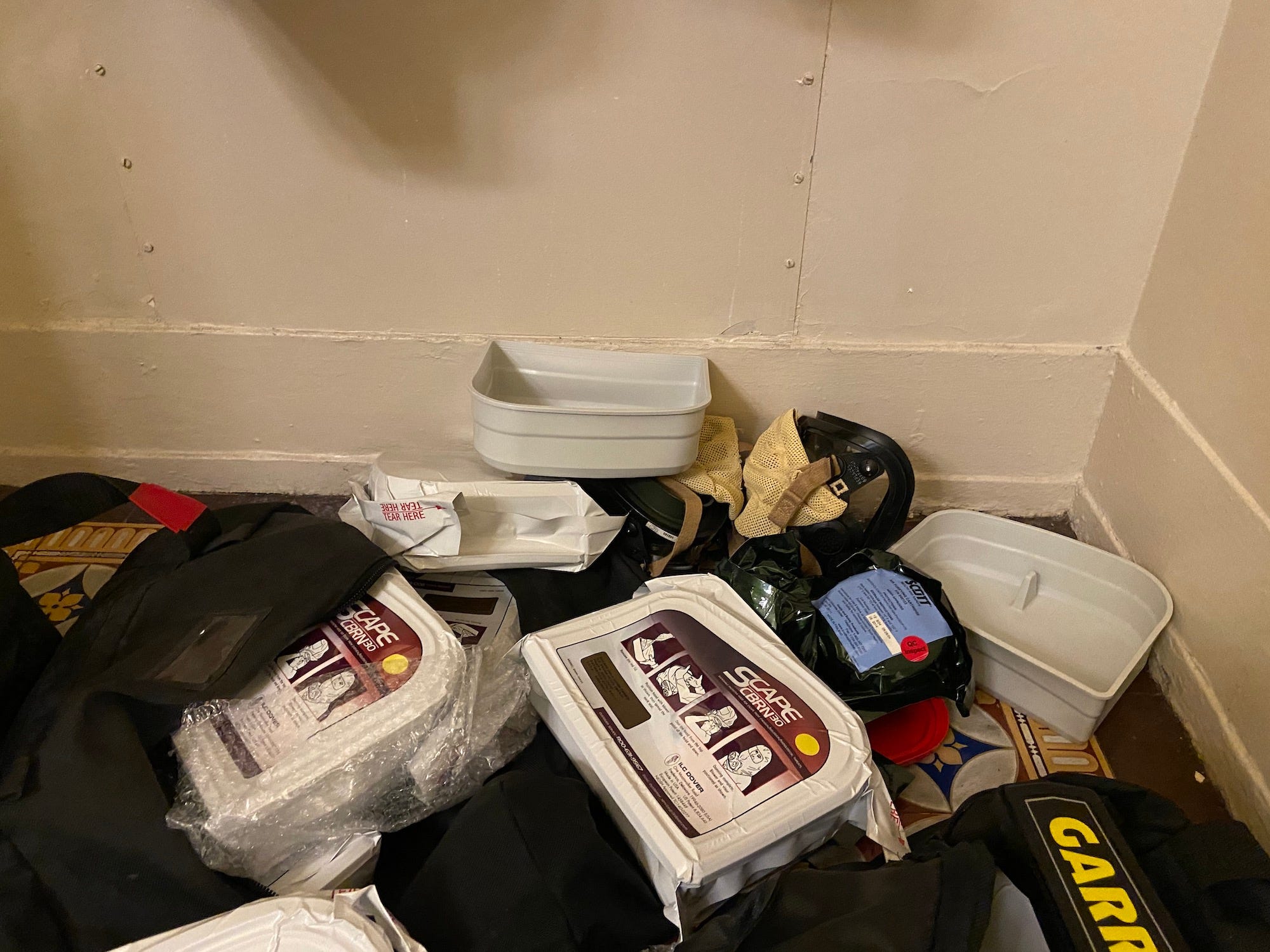 Kayla Epstein/InsiderDiscarded escape hoods are piled into a corner on the third floor of the Senate, outside the viewing galleries. 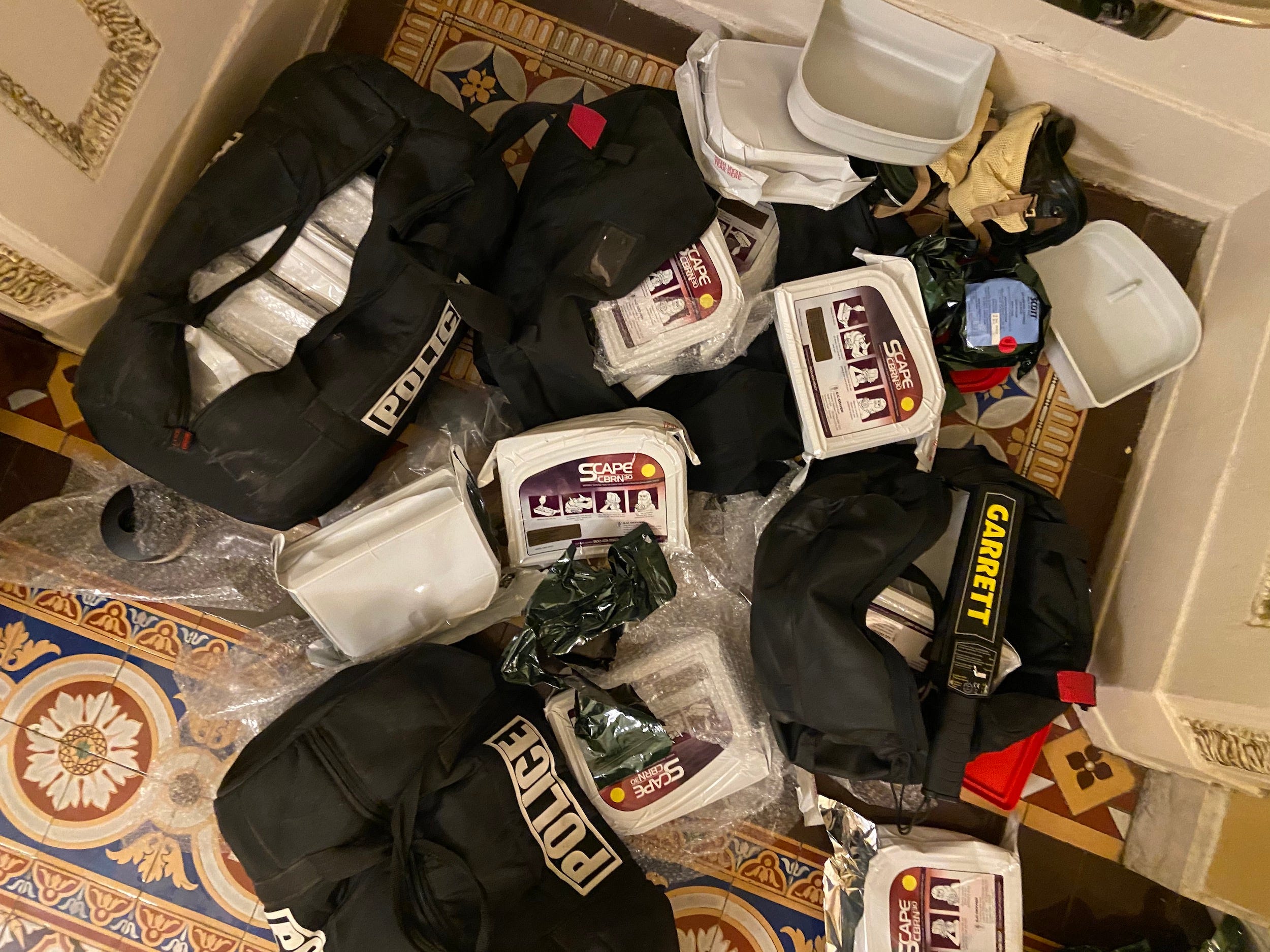 Lawmakers and journalists who were trapped in the Capitol as rioters besieged it had been instructed to use them. 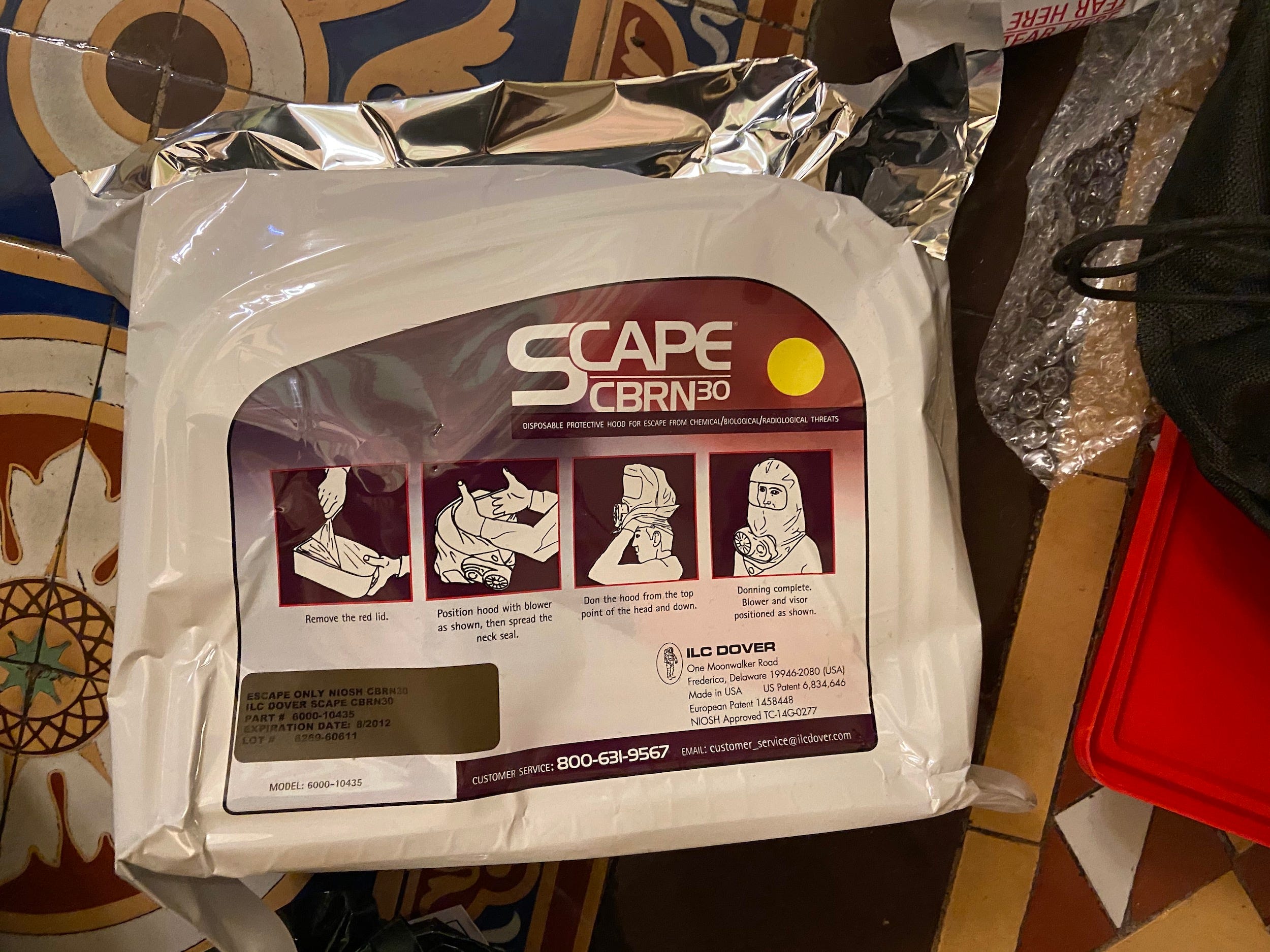 An alcove in the Senate was boarded up. 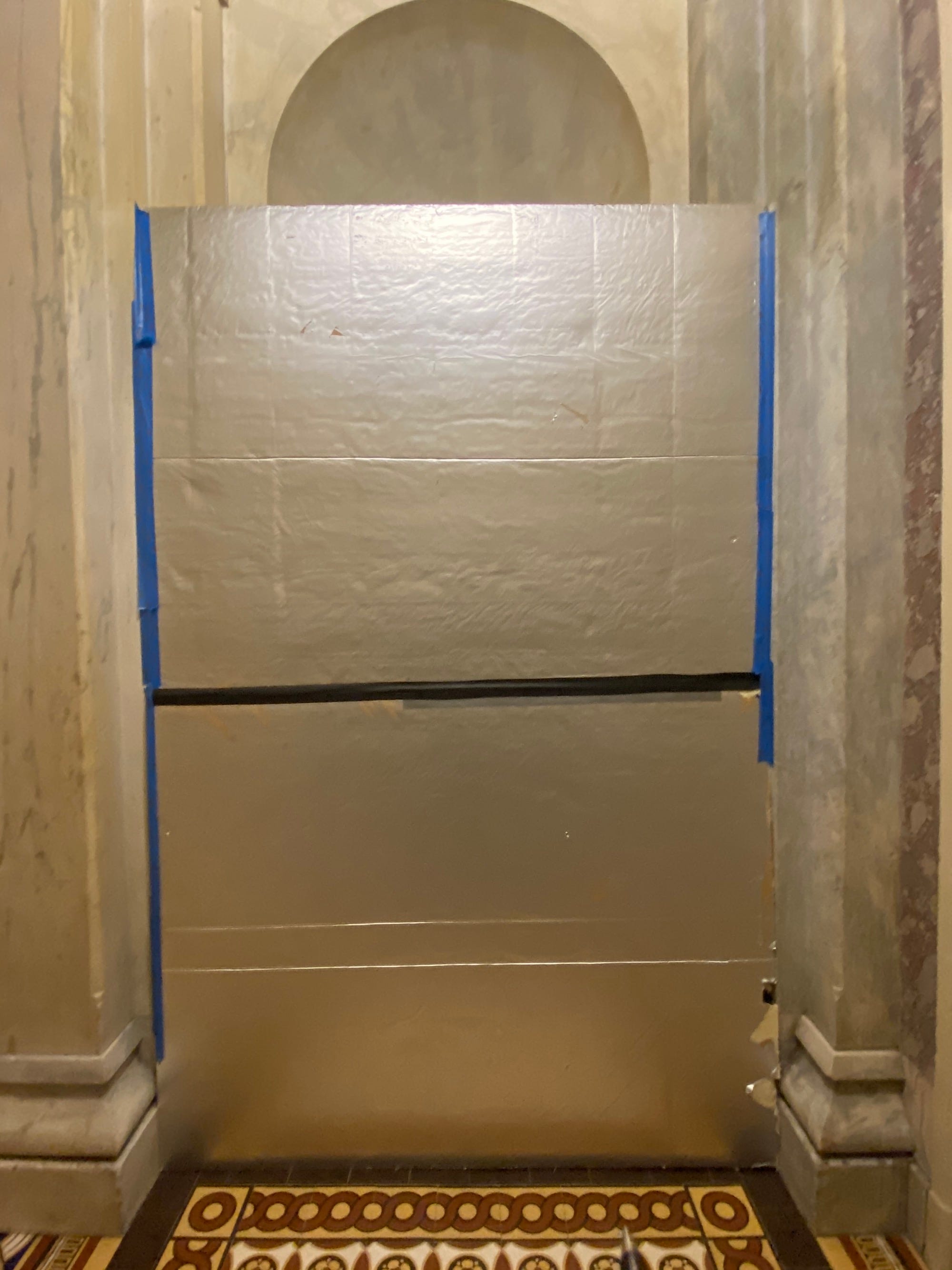 Kayla Epstein/InsiderAn alcove in a Senate doorway is boarded up.

This emergency door in the Senate also had one of its panes smashed. 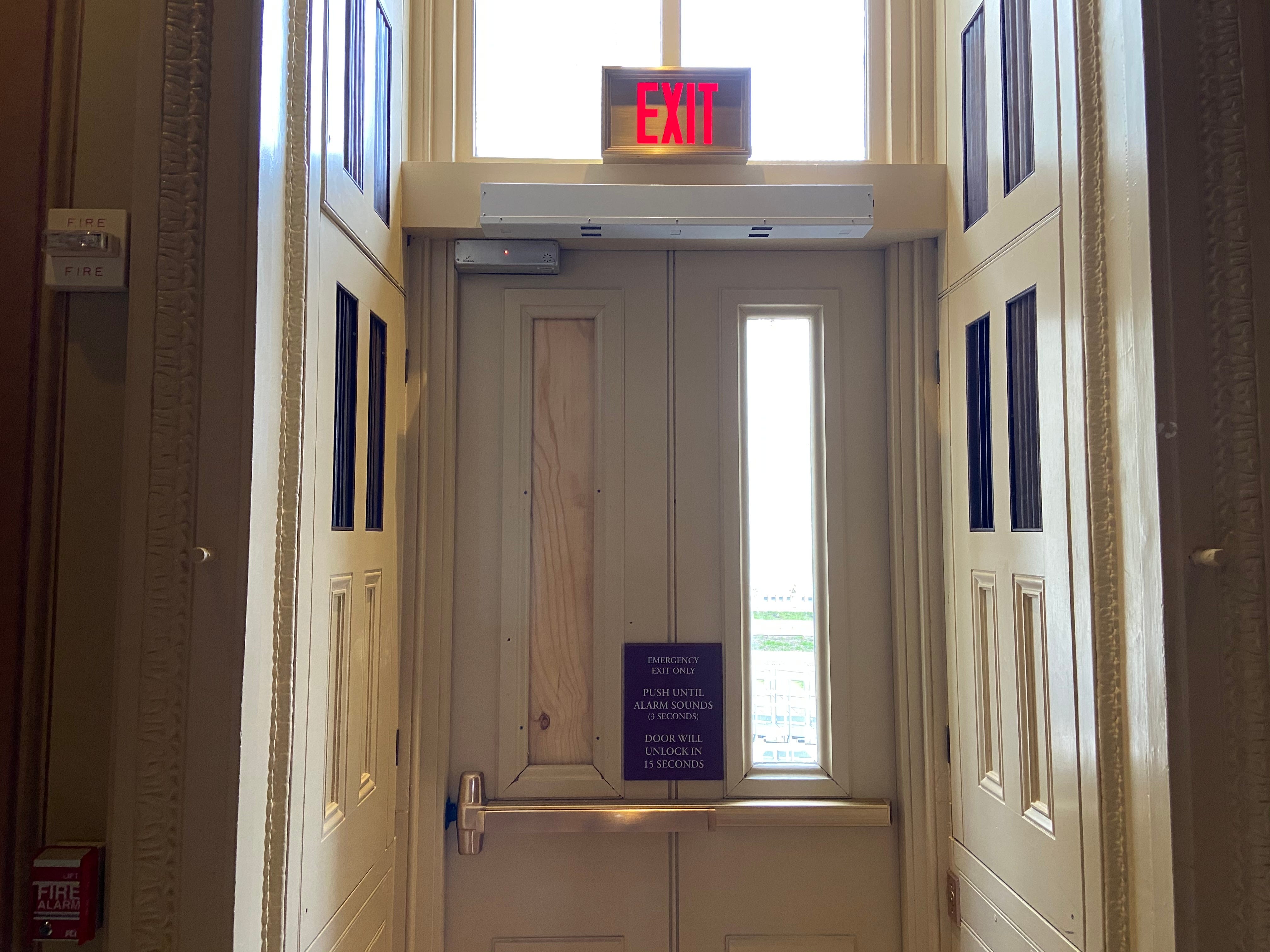 Kayla Epstein/InsiderA broken pane of glass is boarded up on a Senate emergency exit door.

Broken glass was still visible on the door’s handle. 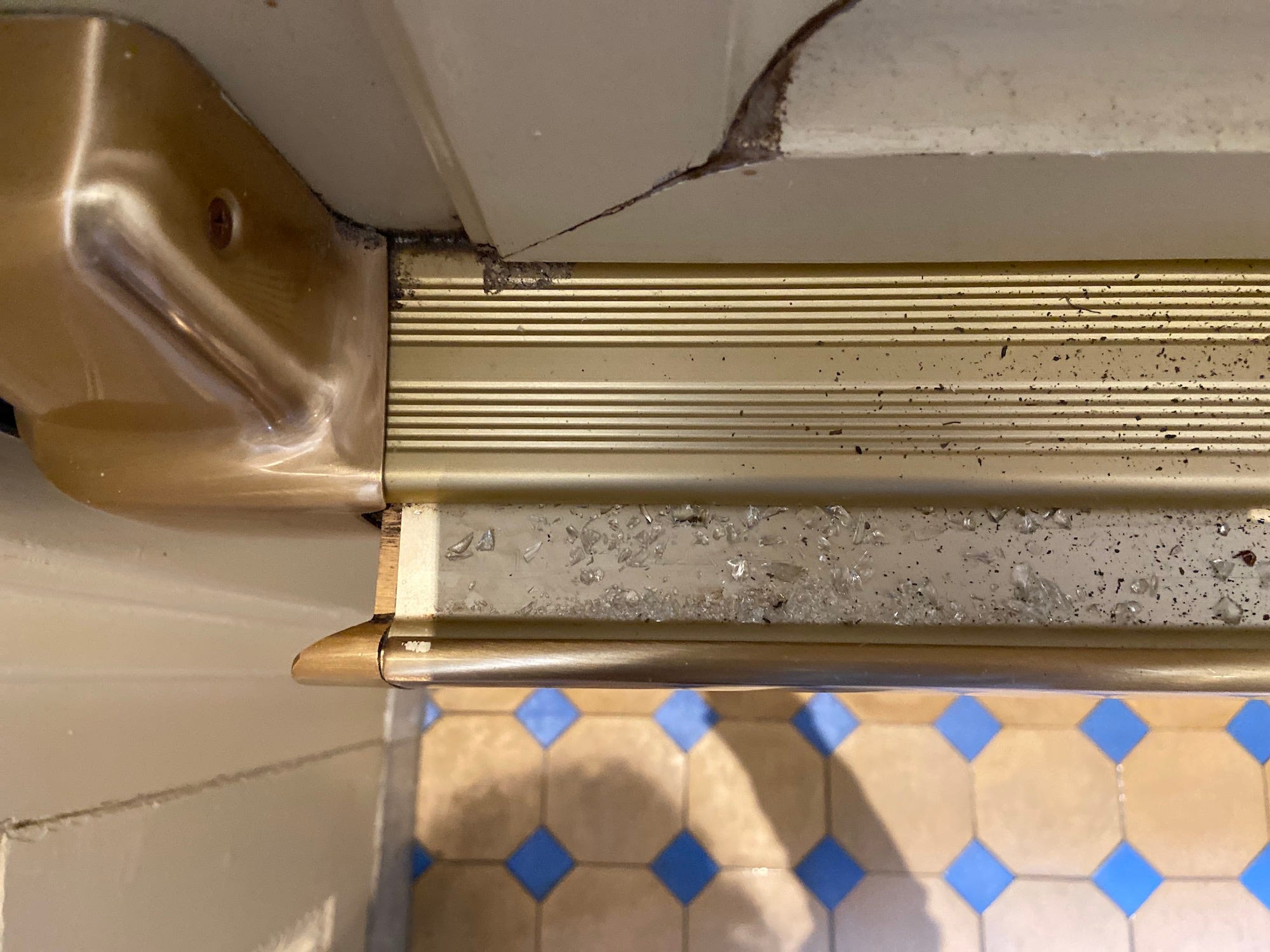 Kayla Epstein/InsiderShards of broken glass still covers the handle of an emergency door in the Senate.

Another damaged window in an ornate Senate hallway. 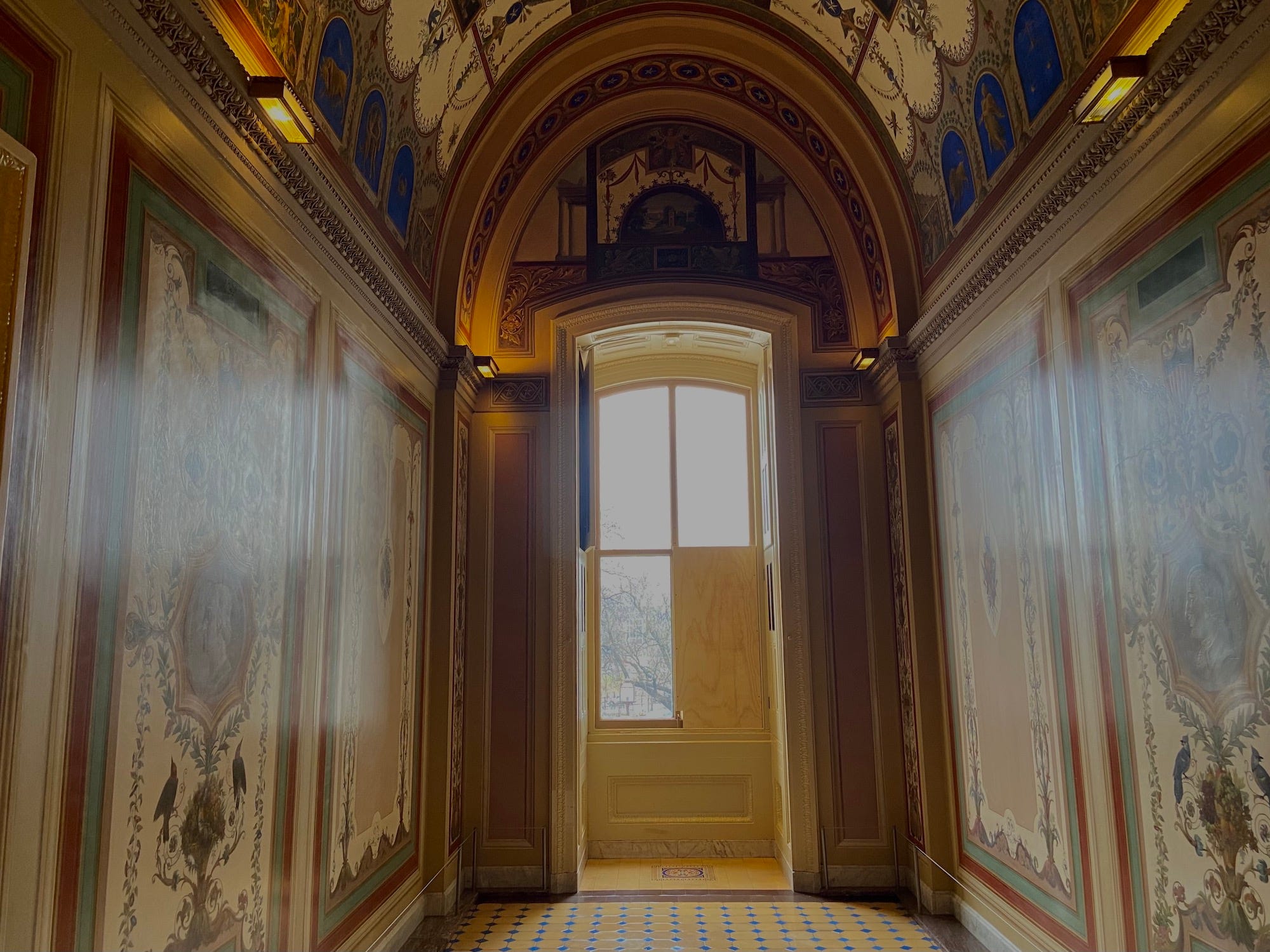 Kayla Epstein/InsiderA broken window is boarded up with plywood in the Senate.

The room outside the Senate chamber where a rioter carried a Confederate flag on Monday was completely empty, and had been scrubbed clean of any damage. Kayla Epstein/InsiderThe room outside the Senate chamber that was filled with rioters on Wednesday.

This is what made Monday’s visit feel somewhat unreal. Most of the Capitol had fortunately been restored to its usual grandeur. But seeing these beautiful, familiar spaces, and knowing what had just transpired within them, gave me chills.

This antechamber just outside the Senate, which is usually full of reporters and photographers waiting for senators to leave the chamber, had instead been filled with rioters and police on Monday. A viral photo of a man waving a Confederate battle flag was taken right here.

On Monday, it was completely empty, save for me and the occasional staffer or national guardsmen who wandered through.

SAUL LOEB/AFP via Getty ImagesSupporters of US President Donald Trump protest in the US Capitol Rotunda on January 6, 2021, in Washington, DC.

Just down the stairs, the Senate doorway where Capitol police officer Eugene Goodman single-handedly faced down a mob stood empty. 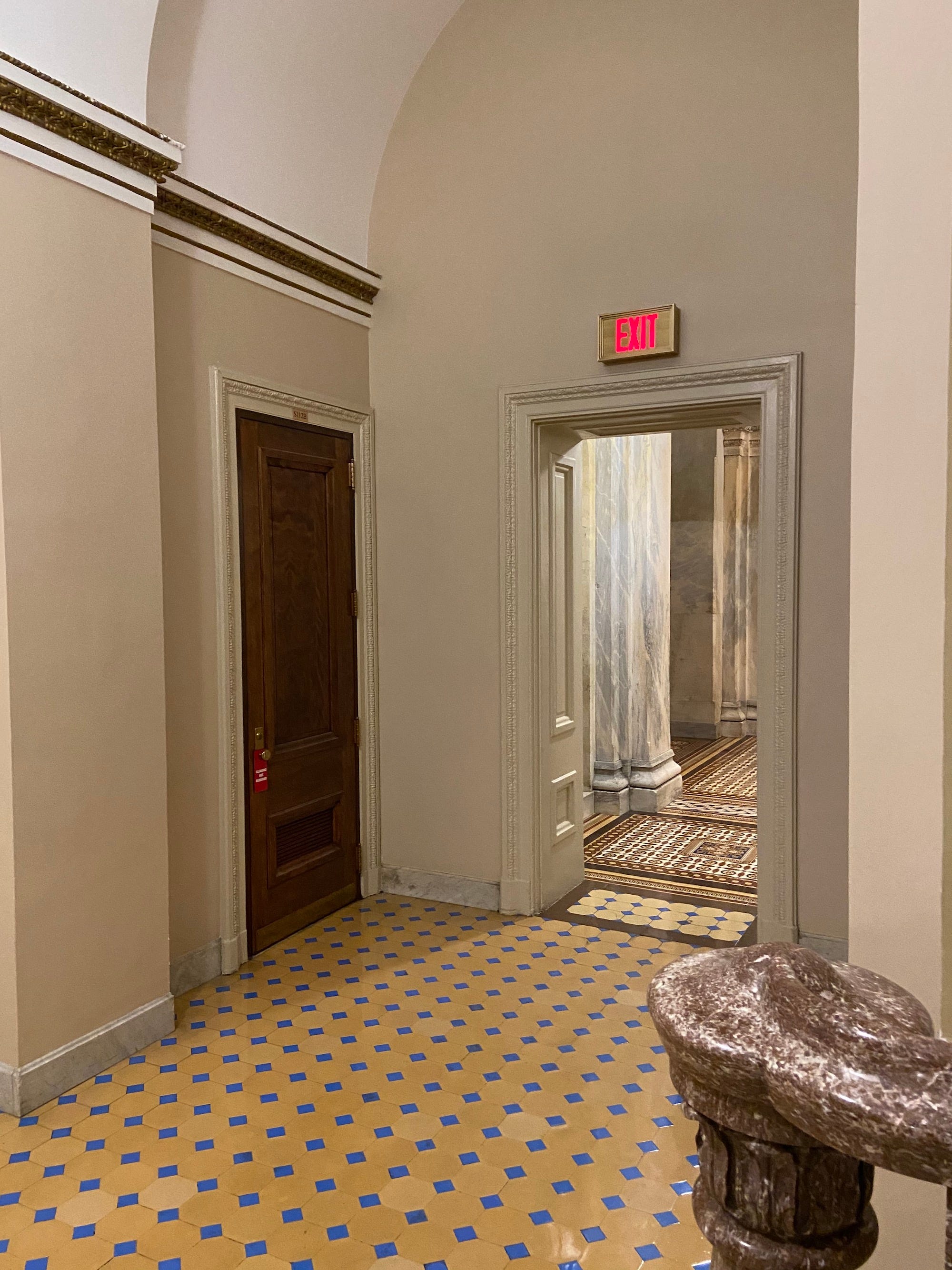 Kayla Epstein/InsiderThe Senate doorway where an officer singlehandedly faced down a mob of pro-Trump rioters.

After surveying the damage in the Senate, I crossed through the heart of the Capitol to visit the House of Representatives. The famous Statuary Hall was gleaming and empty after being filled with rioters last week. 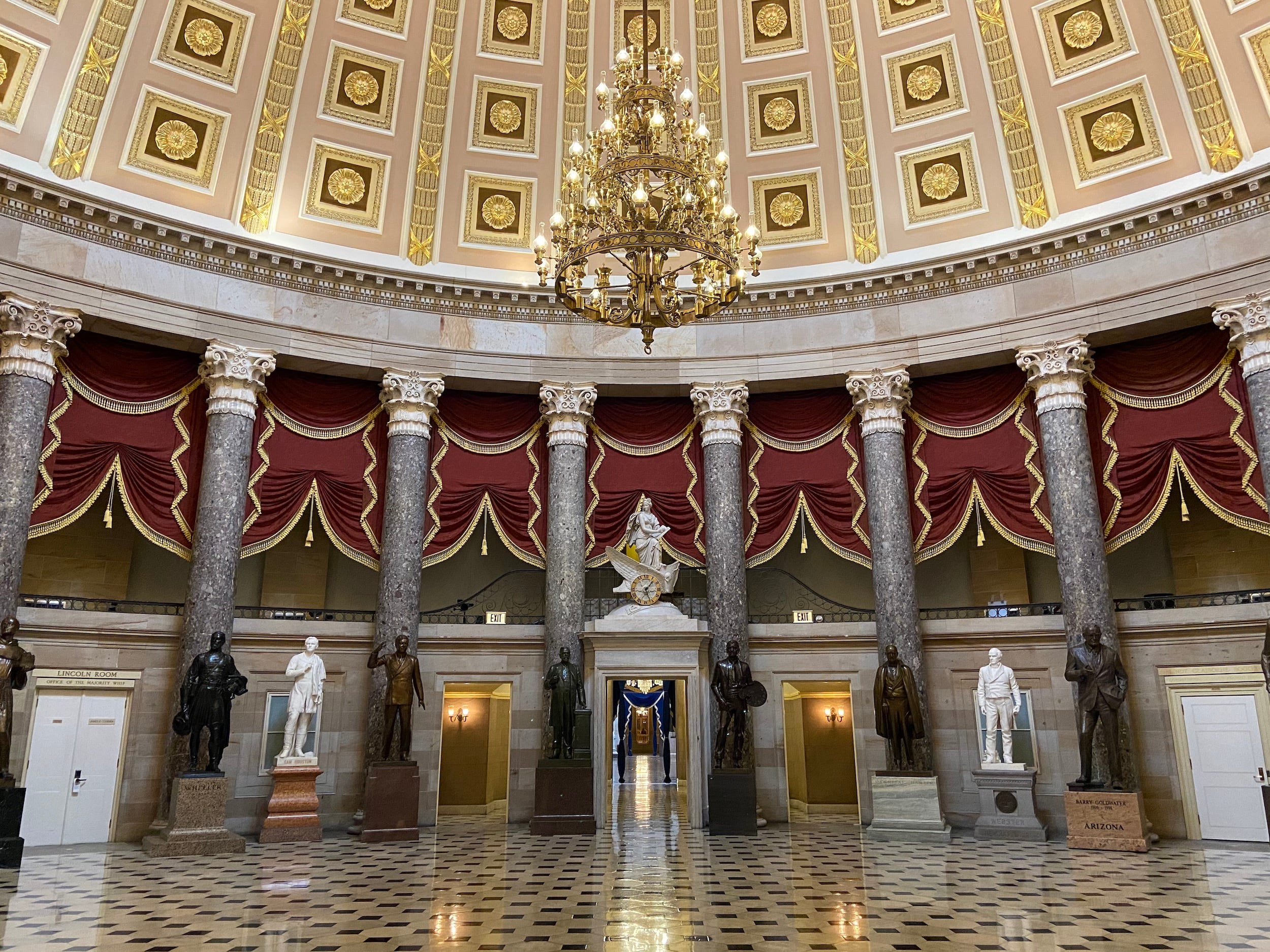 But just off the next room, the Capitol Rotunda, this doorway showed telltale marks of a riot. One of the middle panes had a huge crack, projectile marks peppered the door frame, and riot shields were propped nearby. 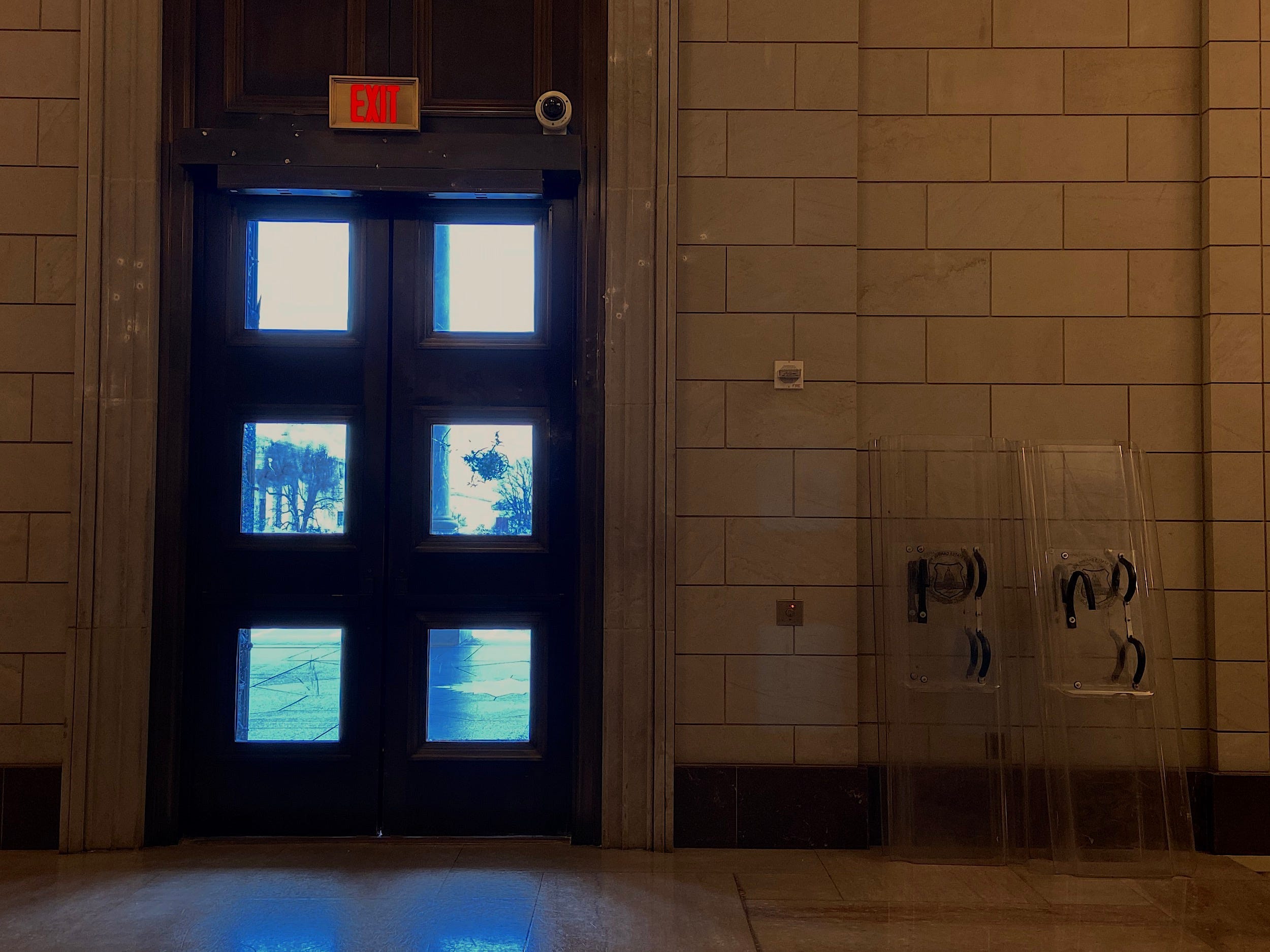 Kayla Epstein/InsiderA door just off the Capitol Rotunda is shattered, with marks along the door frame and riot shields propped nearby.

In the House of Representatives, the Capitol staff had done an amazing job cleaning up after the mob. But disturbing signs of what transpired remained. 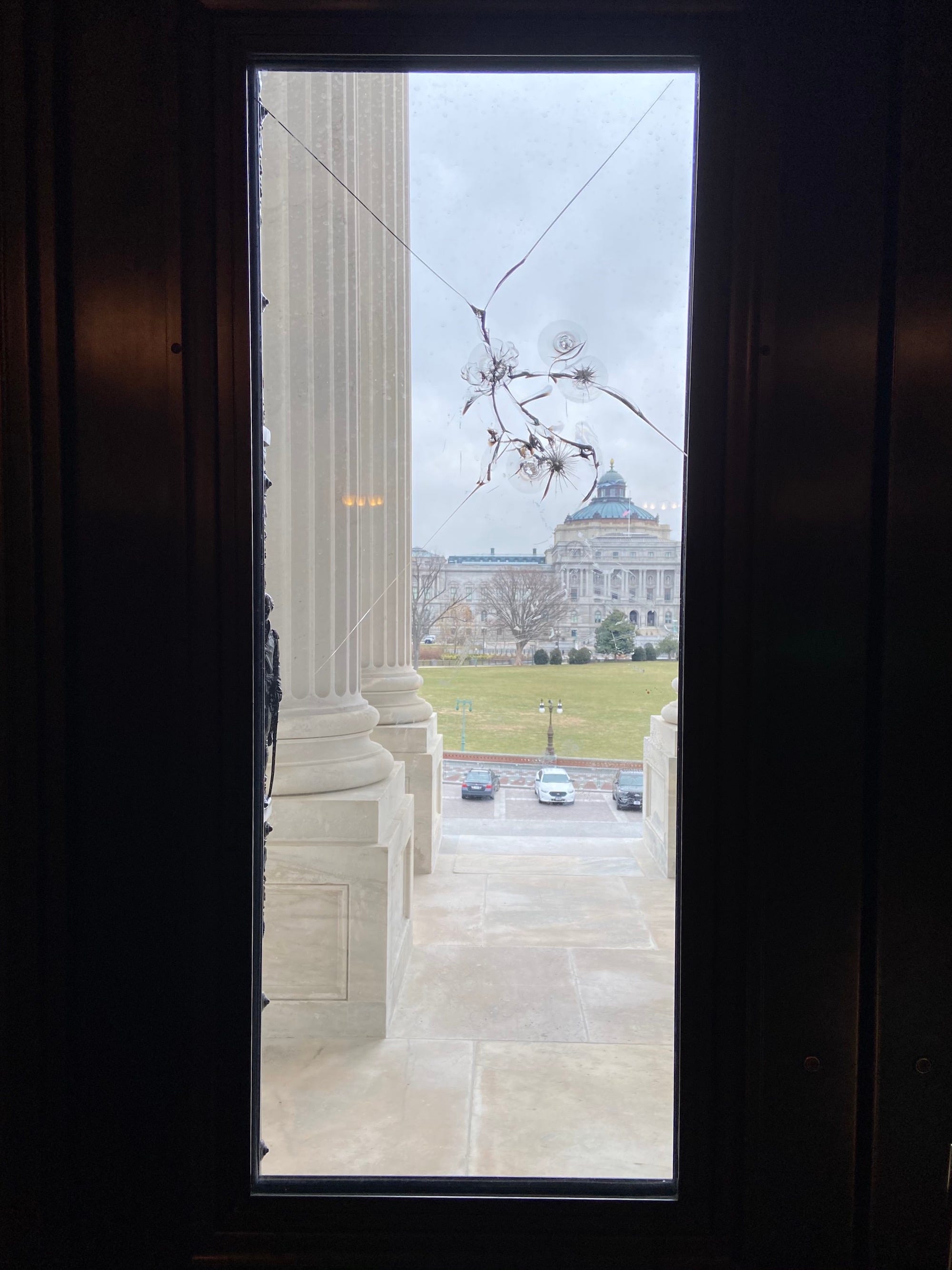 Kayla Epstein/InsiderThe window of a door just outside the House chamber bears splintering cracks where pro-Trump rioters tried to break through the door.

A pane in a door into the House of Representatives, just a few feet from the House chamber, was cracked where rioters had tried to break open the doors.

Around the corner, the windows of one set of doors that lead to the Speaker’s Lobby – Nancy Pelosi’s main office – were either missing or smashed. Three panes were missing completely, while a fourth was splintered with fissures. (Photos are prohibited in the Speaker’s Lobby.)

Capitol police riot shields rested in a corner at a security checkpoint just outside the House chamber. 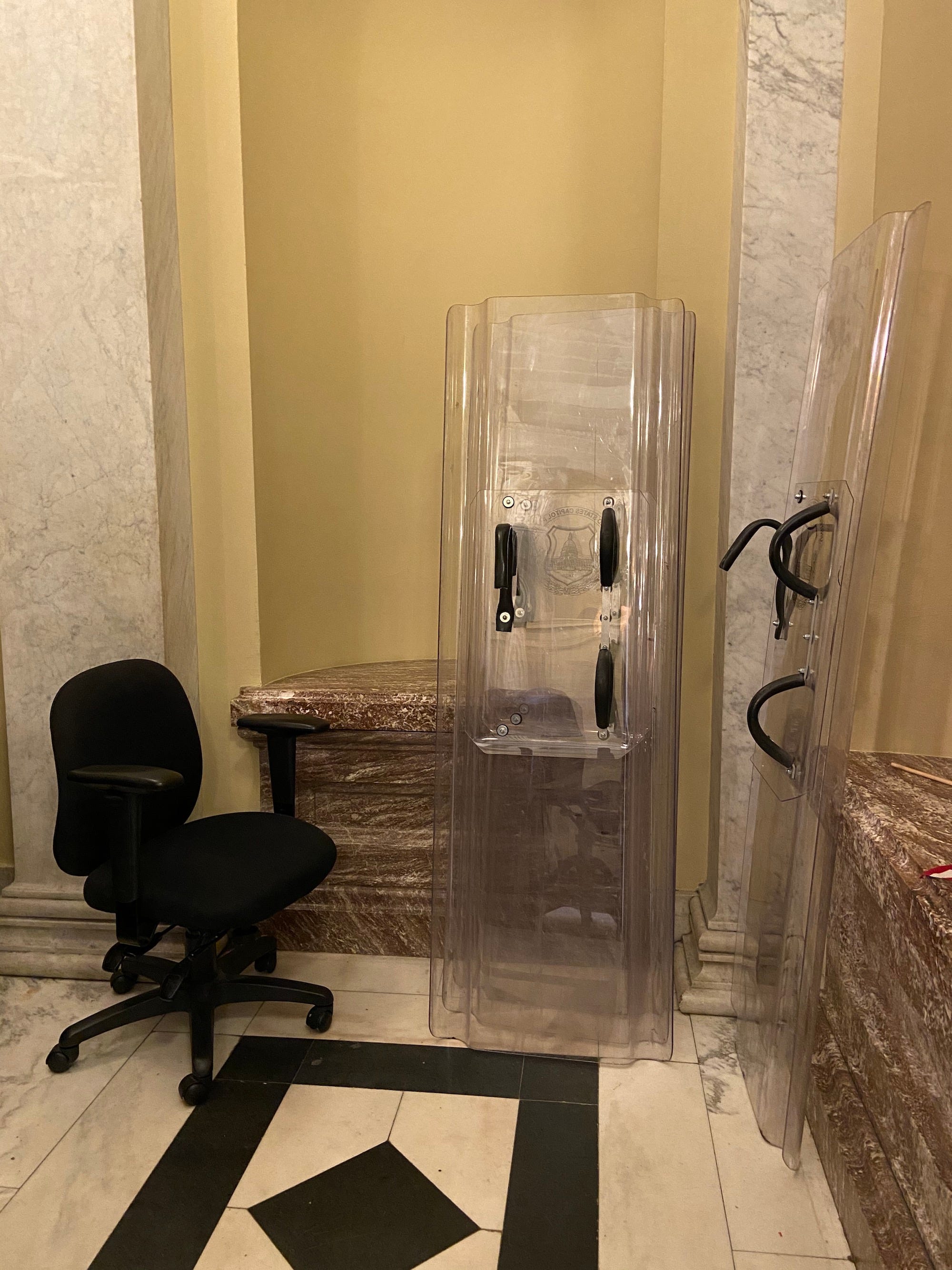 Kayla Epstein/InsiderCapitol Police riot shields in the House of Representatives.

A roll of police tape sat on a table just outside the door that leads to the House chamber. 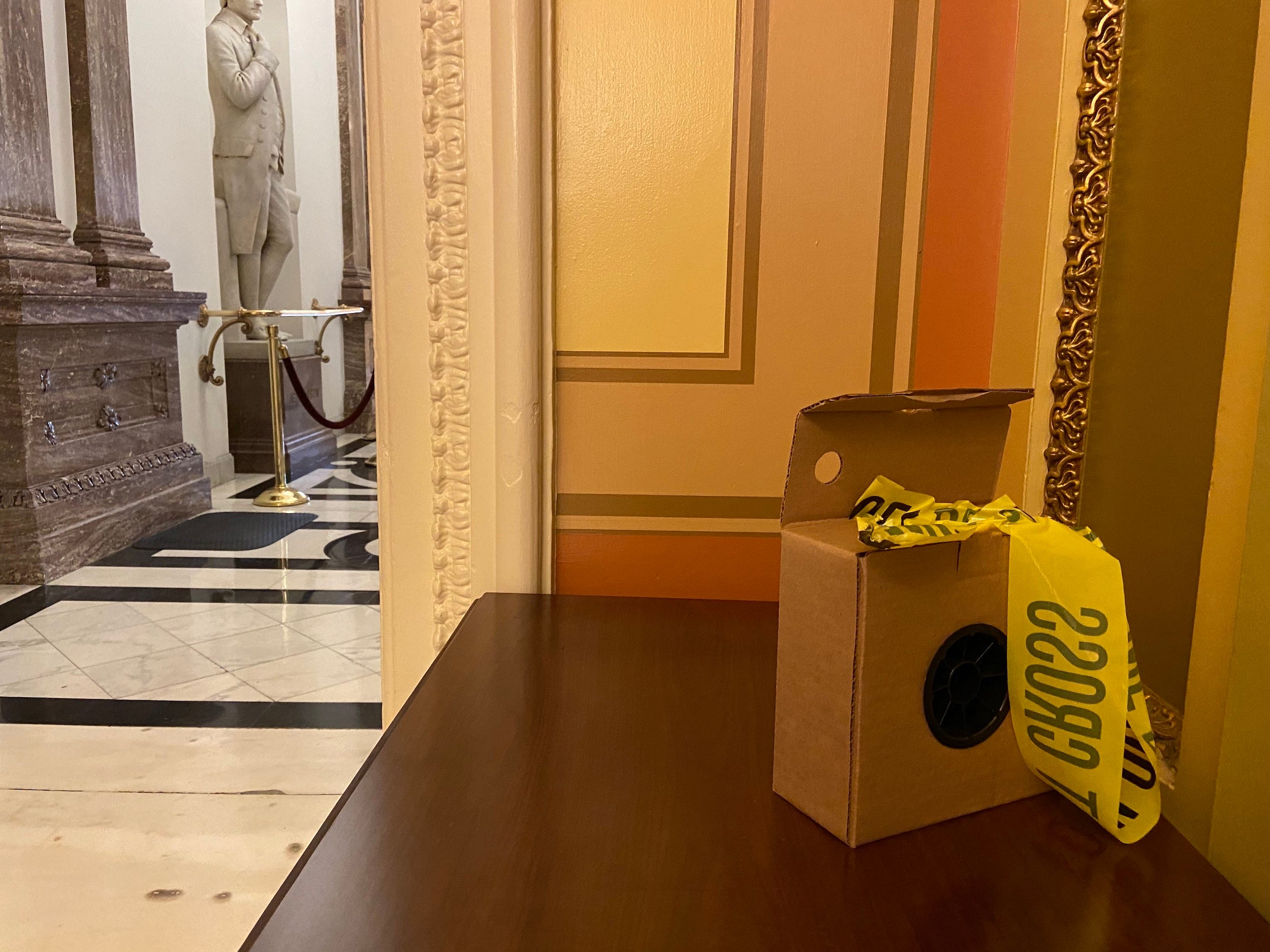 Kayla Epstein/InsiderA roll of police tape sits on a table outside the House chamber.

Venturing back outside in the late afternoon, I saw that several busloads of National Guard troops had arrived at the Capitol for their shifts. 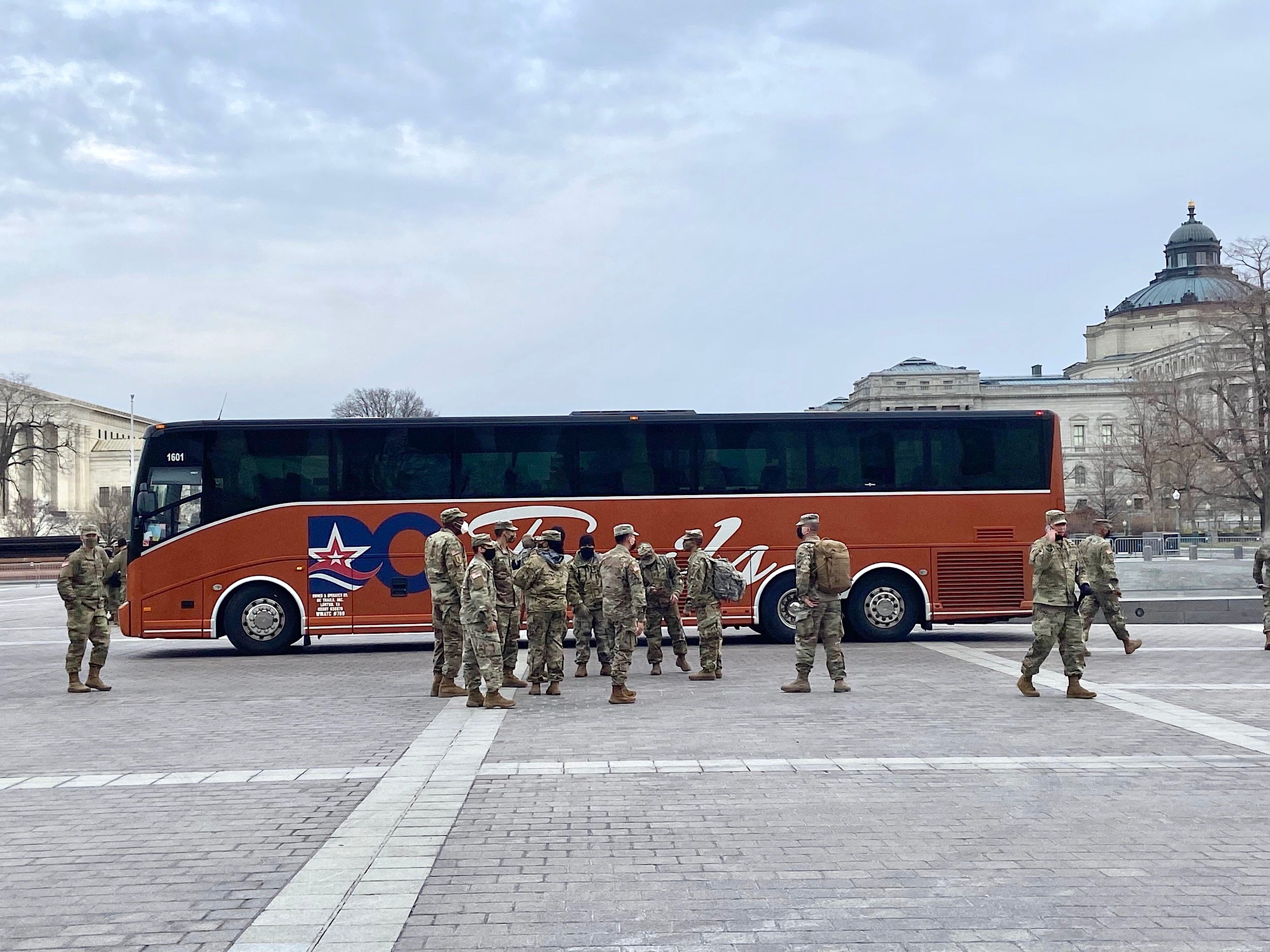 Two female National Guard troops took their position at the western boundary of the new security fence surrounding the Capitol. 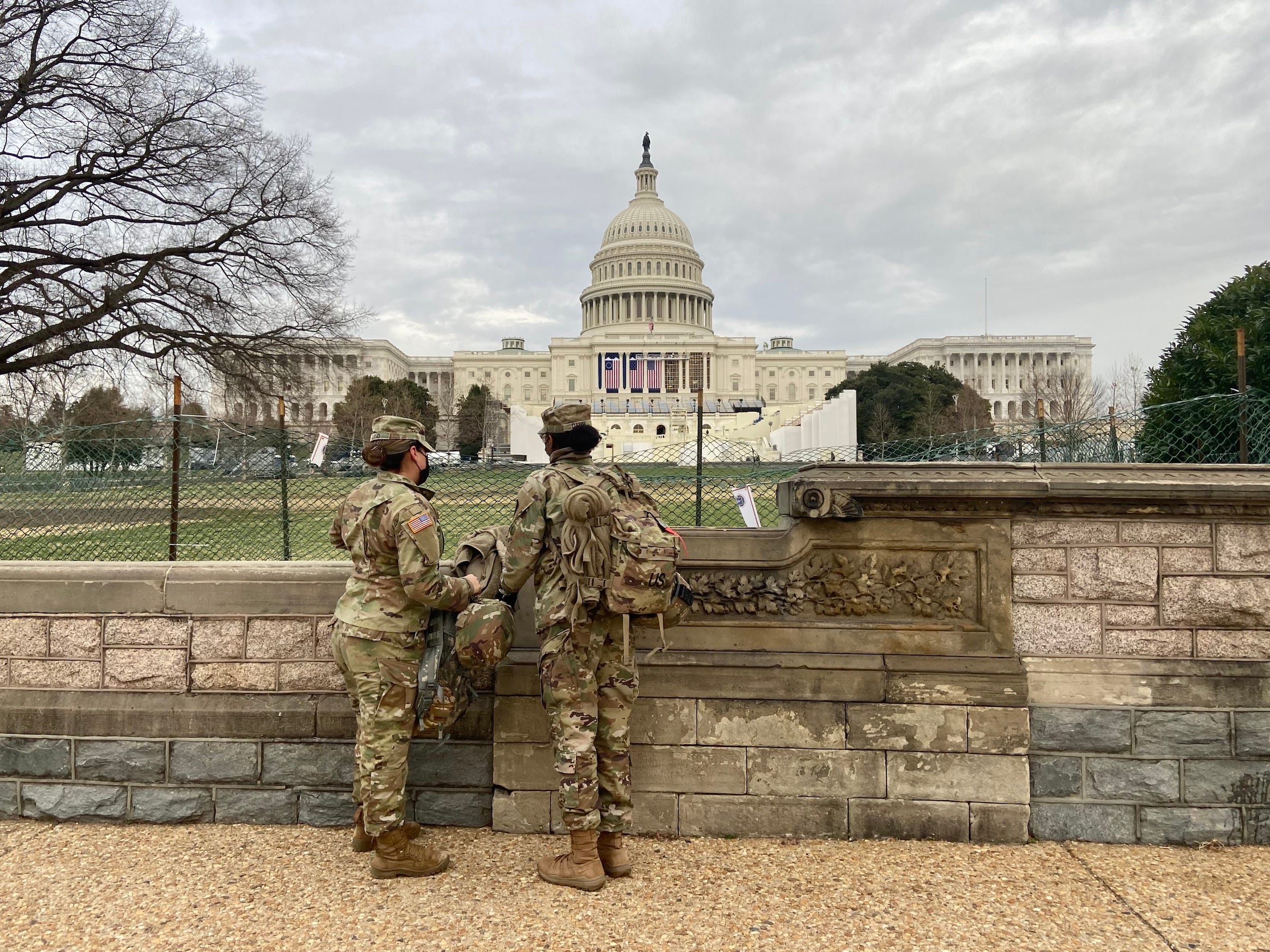 Looking through the fence on the west side of the Capitol, I saw people had created a small memorial to the two dead police officers who were working during the January 6 riot. 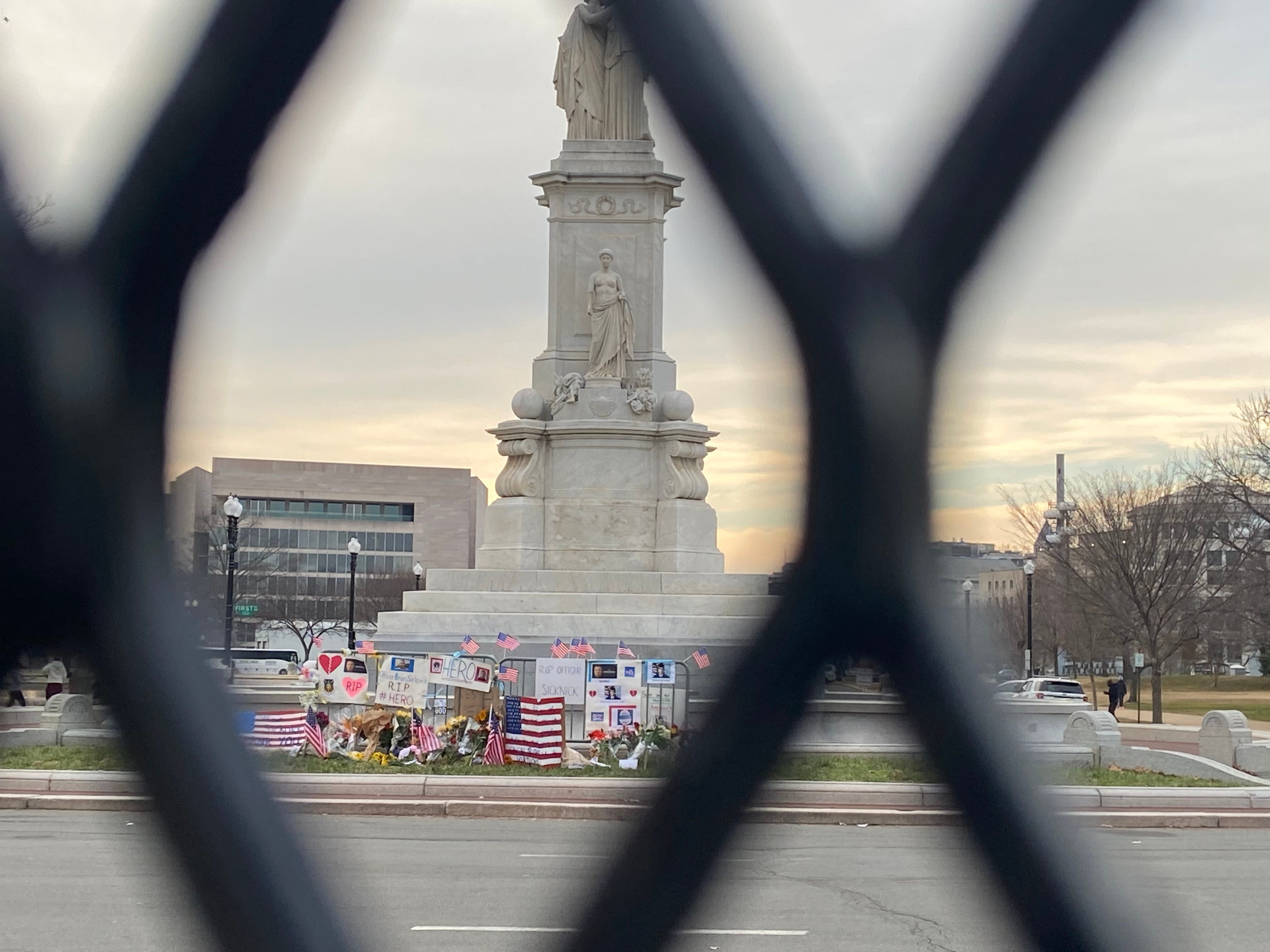 Kayla Epstein/InsiderA small memorial to the two dead Capitol Police officers who were working during the January 6th riot.

The flag that flies over the Capitol on the east side was lowered to half staff. 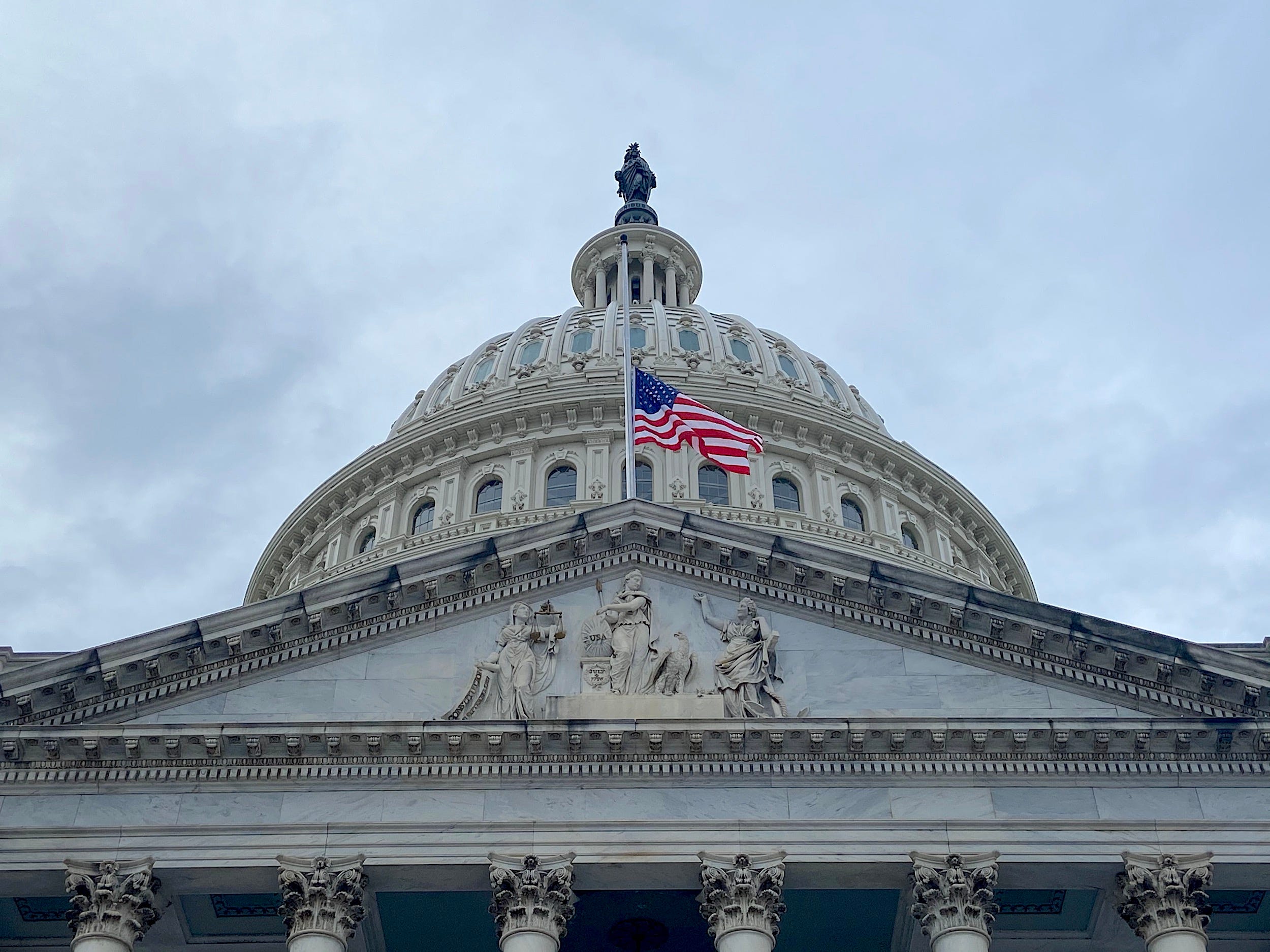 Kayla Epstein/InsiderThe American flag flies at half-staff at the Capitol.

And at some point on Monday afternoon, a person had laid this bouquet of flowers at the foot of the House of Representatives. Kayla Epstein/InsiderA bouquet of flowers was laid to rest outside the US House of Representatives on Monday afternoon.