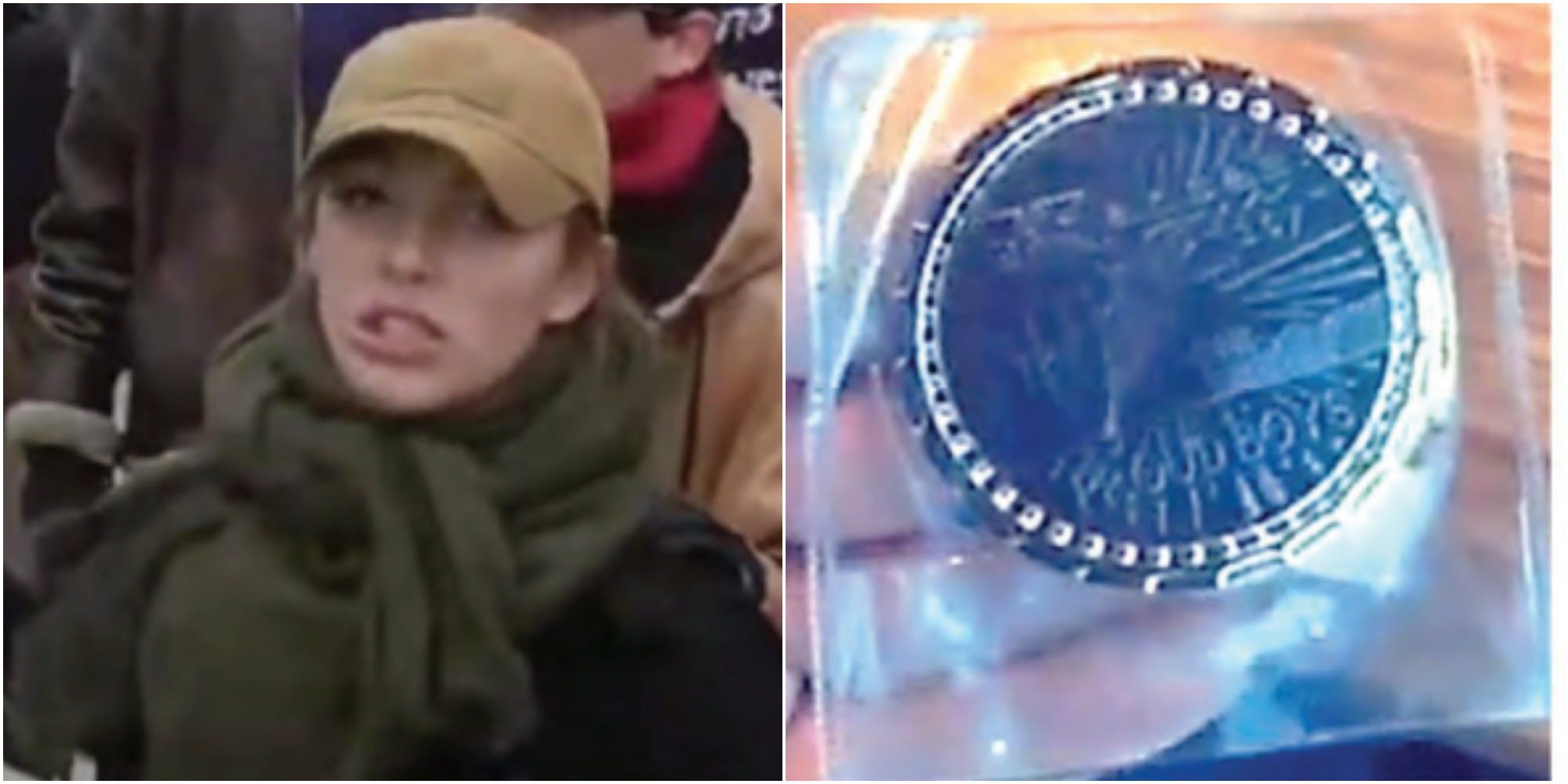 United States District Court for the District of ColumbiaAt left, Felicia Konold in a video taken at the Capitol riot on January 6. On the right, Konold displaying what she said was a Proud Boys membership coin.

An Arizona woman arrested in connection with the Capitol riot on January 6 claimed to have been recruited by the Proud Boys, a misogynistic far-right group, a criminal complaint said.

Felicia Konold was arrested in Arizona last week on charges of conspiracy, civil disorder, obstruction, trespassing, and disorderly conduct, according to the Department of Justice.

The complaint said Konold recorded multiple Snapchat videos describing the riot. In one, it said, she claimed to have been recruited by the Kansas City chapter of the Proud Boys and displayed what she said was a membership coin.

“In the post, the woman claimed that she had been told that even though she was not from Kansas City, she was ‘with them now,'” the complaint said. United States District Court for the District of ColumbiaKonold and her brother, Cory, circled in red on the left, in a video with a group of Proud Boys marching toward the Capitol on January 6.

The claim of acceptance into a Proud Boys chapter has puzzled experts on extremist groups,The Associated Press reported on Wednesday.

The Proud Boys is by definition a men-only group, describing itself as a “pro-Western fraternal organisation for men who refuse to apologise for creating the modern world,” the complaint said.

The Southern Poverty Law Centre, which has designated the Proud Boys as a hate group, said the group is known for misogynistic rhetoric and believes that “women are happier when they stay home and have children.” United States District Court for the District of ColumbiaKonold recorded a Snapchat video after the riot, the criminal complaint said.

Alex DiBranco, the executive director of the Institute for Research on Male Supremacism, told the AP that no one in her group was aware of a woman ever having been recruited by a Proud Boys chapter.

Cassie Miller, a senior research analyst for the SPLC, told the AP that, for a time, women formed auxiliary Proud Boys groups like the “Proud Boys’ Girls,” made up of the wives and girlfriends of members.

But these women were never considered full members of the Proud Boys, Miller said, adding that she wasn’t aware of any of these auxiliary groups being active.

“The group has been very clear from the beginning it is an organisation for men only and they hold misogynistic [beliefs] and believe that women are best suited for domestic labour and should act as mothers and homemakers,” Miller said.

Eric Ward, a senior fellow at the SPLC, told the AP that Konold’s receiving a coin would suggest dissension in the Proud Boys’ ranks.

“There is something happening around gender in the Proud Boys â€” and it is something worth paying attention to,” Ward said.

Recent news reports have indicated that the group is in disarray in the wake of the Capitol riot, particularly after its leader, Enrique Tarrio, was unmasked as a longtime FBI informant.

Konold’s criminal complaint said that she and her brother, Cory, were seen on video marching toward the Capitol with a group of Proud Boys on January 6, pushing past several police barricades before eventually breaking into the building with the group. Footage inside the Capitol showed Konold and others working to stop police officers from being able to lower the security gates in the building, the complaint said.

One of the four others charged alongside Konold is William Chrestman, who is described in another court document as the leader of the Kansas City Proud Boys, according to the AP.

Felicia and Cory Konold’s father, Robert Konold, told the Arizona Daily Star after their arrests last week that he didn’t know they were members of a group.

“Neither of them, as far as I knew, had any affiliation with any group or anything,” he said.

Robert Konold said that while he and his daughter had become estranged in the past year, he remained “tight” with his son â€” he said he would have known if his son had joined the Proud Boys.

Robert Konold said that it was his daughter who had really wanted to go to the Trump event and that her brother had tagged along.

“He was just going to drive with his sister because she was going to go regardless,” Robert Konold said. “He figured, ‘Hey, road trip, and we can both share driving.'”