People are mocking Capitol riot detainee 'Q Shaman' for refusing to eat non-organic jail food because he 'gets very sick,' and a dietitian agreed it doesn't add up 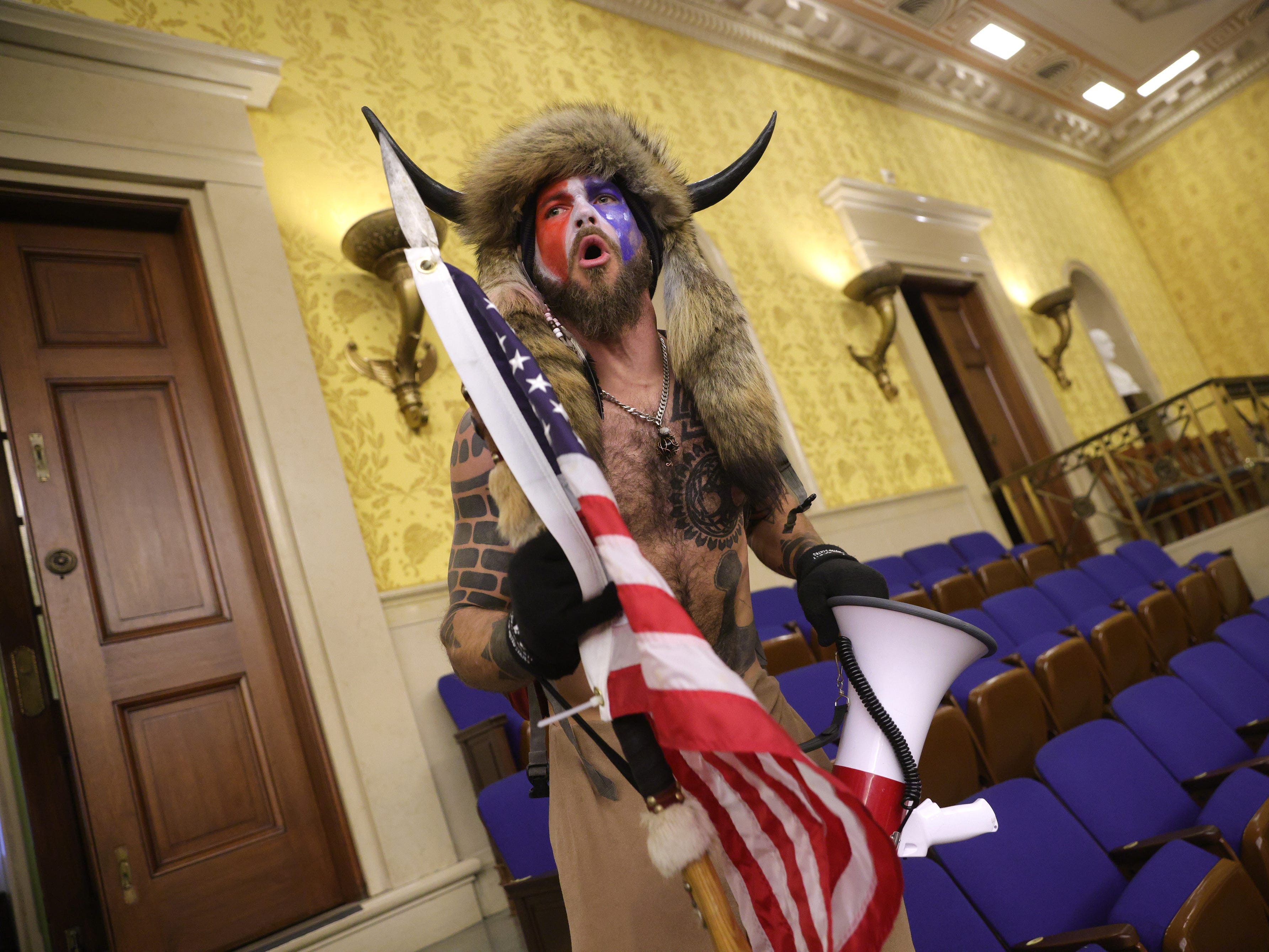 Win McNamee/ Staff/ Getty ImagesJake Angeli was detained after joining hundreds of others to storm the Capitol on January 6.

Jake Angeli, the shirtless man who stormed the Capitol with hundreds of others last Wednesday, refused to eat while in custody unless officials accommodated his all-organic diet.

Angeli, whose real name is Jacob Anthony Chansley, was seen in photos and videos participating in the January 6 Capitol riots, taking pictures at the Senate dais and roaming through the building holding a megaphone. He donned a fur hat with bull horns and wore red, white, and blue face paint.

Five people died in the Capitol riots, including a Capitol police officer who sustained injuries while responding to the siege.

While news of Angeli’s arrest and detainment have topped recent headlines, one detail about his dietary restrictions sent social media into a frenzy.

The Arizona Republic reported that at Angeli’s first hearing with Judge Deborah Fine, his public defender revealed that Angeli had not eaten since his arrest on Friday. The public defender said Angeli, 33, had a restricted diet but was not sure if it was for religious reasons.

Martha Chansley, Angeli’s mother, spoke to reporters outside the courthouse and offered more details about her son refusing to eat while in jail.


Read more:
What prison food in the US really looks like, and why some inmates refuse to eat it

“He gets very sick if he doesn’t eat organic food. He needs to eat,” she said.

On Monday, David Gonzales, US Marshal for the District of Arizona, told local news station KNXV that “we will abide by the judge’s order” and provide food that accommodates his organic diet.

US prisons provide medical, religious, and “therapeutic” dietary accommodations to inmates, according to the US Marshal’s Detention Standards handbook. Insider reached out to the US Marshal to clarify whether organic food is included, but had not heard back at the time of publication.

Insider also reached out to the federal prison in Arizona where Angeli is being held but did not immediately hear back.

The word “organic” began to trend on Twitter following news of Angeli’s hearing Monday night, and people flooded the social-media platform with their reactions.

Another person tweeted, “My apologies sir. We do not serve organic food at the ChÃ¢teau County Jail nor the Federal Resort.”

I can't, I just can't, the dude that wore a costume with the horns on his head when he stormed the Capitol, is in jail and is on a hunger strike because they won't feed him organic food.

I’m going to have one of my black clients in jail today demand organic food. Just to see what happens.

“I can’t, I just can’t,” another added. “The dude that wore a costume with the horns on his head when he stormed the Capitol, is in jail and is on a hunger strike because they won’t feed him organic food.”

“I’m going to have one of my black clients in jail today demand organic food. Just to see what happens,” wrote Ron Filipowski, whose Twitter bio states he is a former state and federal prosecutor in Florida.

that may be the funniest take on "White Privilege" expecting organic food while in jail!

If his name was Jamal Brown and he was being held at Rikers, would he be getting an all organic shaman diet?

Whatever the fuck a shaman diet is.

“That may be the funniest take on ‘White Privilege’ expecting organic food while in jail!” wrote one person.

Singer Holly Figueroa O’Reilly wrote, “This white privilege sandwich has everything: white man, his mum, demands organic food. Do we have Jacob Chansley’s mugshot yet?”

A dietitian weighs in

Insider spoke with a registered dietitian who said the difference in the amount of pesticides between organic food and non-organic food wasn’t likely to cause a severe physiological reaction.

“The truth is, foods that are labelled as organic could still contain some trace pesticides,” Lisa Moskovitz, RD, founder and CEO of The NY Nutrition Group, told Insider.

Neither Moskovitz nor Insider have viewed Angeli’s medical history prior to publication.

“The organic might have less pesticides, but it’s not going to be necessarily pesticide-free. So, whatever could be causing somebody to become ill between organic and non-organic doesn’t necessarily add up,” she said.

The biggest difference regarding produce, like fruit, is in the pesticide residue. The distinction in animals foods, like milk, involves antibiotic use and hormones.

Moskovitz said the human body is capable of filtering out pesticides, “so this sounds like somebody who’s built up this idea in their head that this food could directly cause them to become ill. It’s not really something that’s scientific, it’s more psychological.”

Moskovitz noted that the nutrition industry, now more than ever, has seen individuals struggle with their relationship to food.

“Many individuals can get trapped in self-diagnosing and believe they are allergic or intolerant of foods when it is not the case. Food fears can become so severe that it could create health complications that wouldn’t exist otherwise. The stress around food is profound,” said Moskovitz.

Insider’s Toketemu Ohwovoriole similarly reported that while organic food may be better for you in some ways, there is no clear evidence that eating organic food makes a significant health difference.

Angeli has been associated with QAnon

Angeli, who’s known as “Q Shaman,” has been charged with disorderly conduct, violent entry, and illegally being on restricted spaces within the Capitol grounds.

For years, Angeli has been visibly involved with QAnon, a far-right conspiracy theory that pushes the unsubstantiated claim that President Donald Trump is battling a “deep-state cabal” of human traffickers and pedophiles. Individuals associated with QAnon have been found at “Stop the Steal” protests after President-elect Joe Biden won the 2020 race.

Rioters who stormed the Capitol were spotted wearing Q memorabilia.

Judge Fine ordered that Angeli be held until January 15 as she decides if he will face charges in Washington, DC. Gonzalez told the Arizona Republic that Angeli would face charges that could keep him behind bars for “years and years.”