Several US Capitol Police officers have been suspended after welcoming pro-Trump rioters into the building. 10 to 15 officers under investigation, lawmaker says. 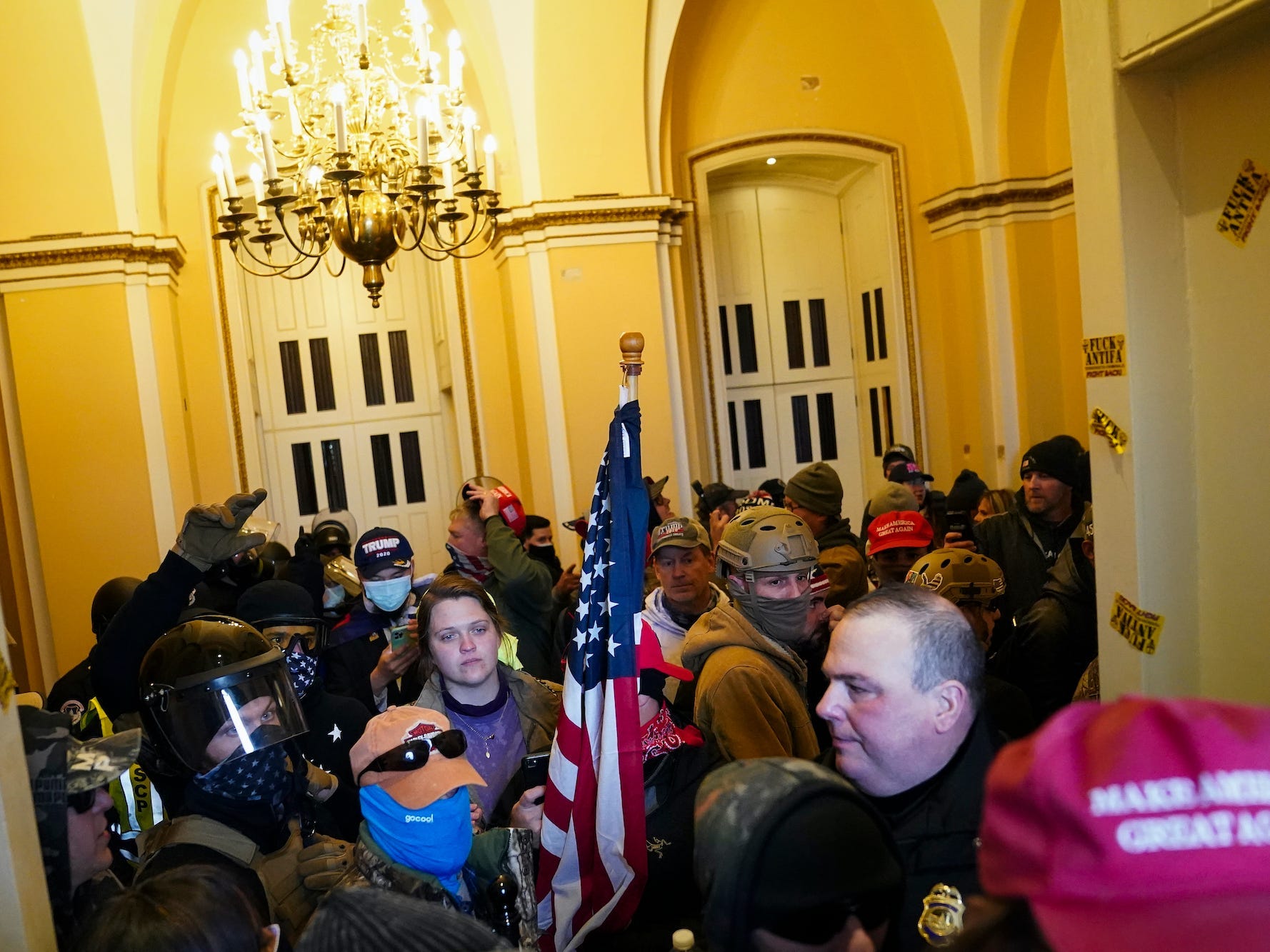 John Minchillo/APA pro-Trump mob is seen after breaching the Capitol building on Wednesday.

Two members of the US Capitol Police have been suspended after welcoming pro-Trump rioters into the Capitol building during the insurrection last Wednesday, Rep. Tim Ryan told reporters Monday.

The Ohio lawmaker said at a press conference that one of the suspended officers took a selfie with a rioter while the other put on a “Make America Great Again” hat and directed insurrectionists through the building.

Ryan also said a third individual has been arrested, but said it was not clear if they were a member of the Capitol Police or National Guard.

Ryan, a member of the Legislative Branch Subcommittee that oversees spending on the Capitol Police force, said there were between 10 and 15 ongoing investigations into officers’ conduct.

Representatives for the Capitol Police didn’t immediately respond to Insider’s request for comment.

The attack on January 6 was the worst assault on the US Capitol since British forces burned it down in 1814. The rioters sought to stop the certification of Electoral College votes for President-elect Joe Biden at the urging of President Donald Trump, who has encouraged a false conspiracy theory that he was the true winner of the 2020 presidential election.

Five people, including one Capitol Police officer, died following the riot. Lawmakers resumed the vote-counting process later Wednesday and confirmed Biden as the victor, though nearly 150 Republican members of Congress still objected to the process.

Amid the violence, a video circulated on social media showing one officer taking a selfie with an individual entering the Capitol building. Capitol Police have not yet announced his identity.

Cops are taking selfies with the terrorists. pic.twitter.com/EjkQ83h1p2

One of the insurrectionists who entered House Speaker Nancy Pelosi’s office told The New York Times he also tried to enter Democratic Senate Minority Leader Chuck Schumer’s office. He said when he couldn’t find it, he asked one Capitol Police officer, who directed him.

The attack triggered immediate scrutiny of why the Capitol’s security forces were not better prepared for the attack, and why it took so long for the National Guard to arrive with backup.

Capitol Police Chief Steven Sund and the Sergeants-at-Arms for the Senate and House of Representatives have all resigned in the aftermath of the attack.

Ryan said Congress would appropriate additional funds to ensure that Biden’s inauguration on January 20 would be safe.

He also said Monday that he would vote for a resolution asking Vice President Mike Pence to invoke the 25th Amendment to strip powers from Trump, and would vote to impeach Trump if Pence wouldn’t take that step.