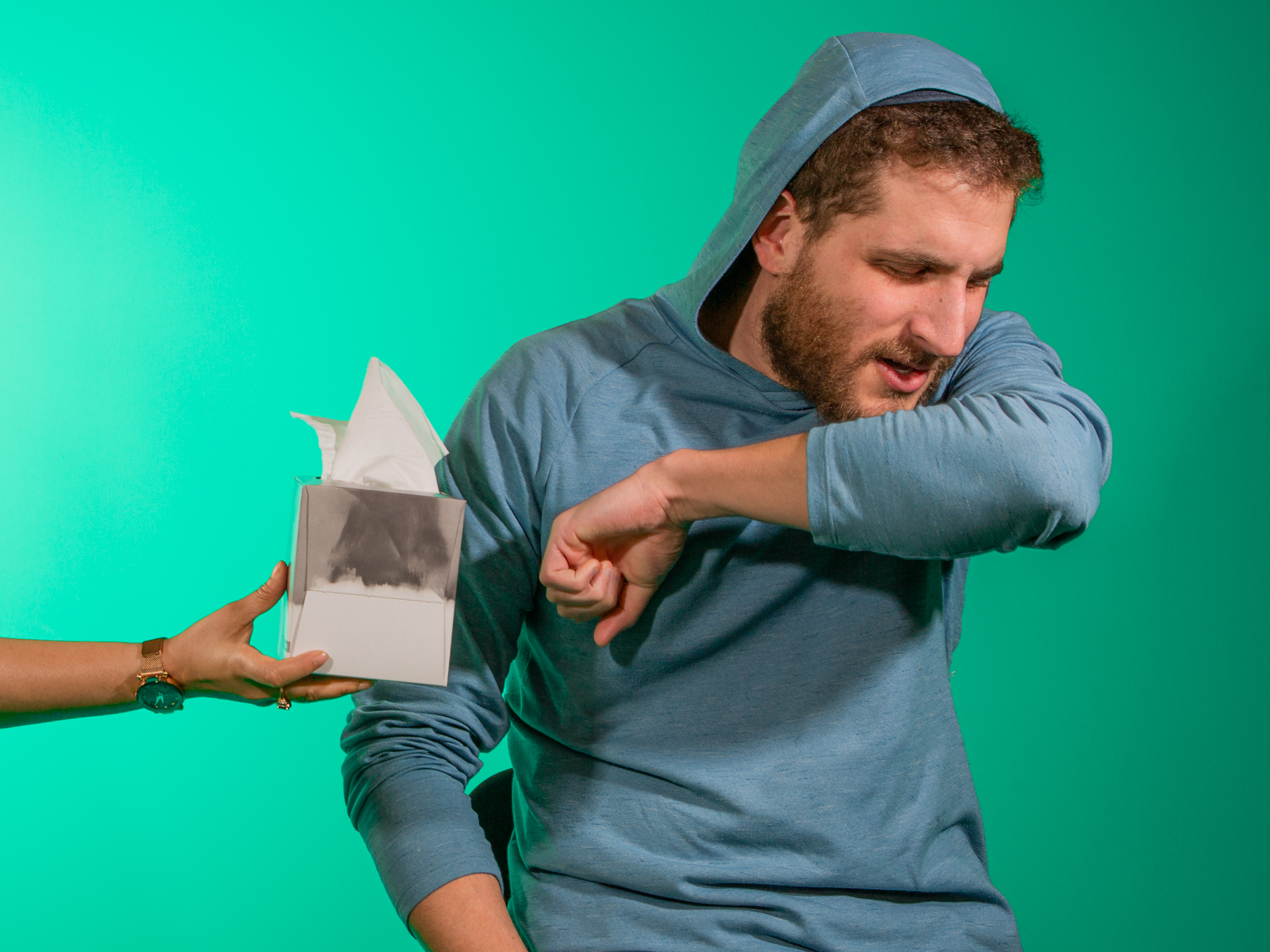 Crystal Cox/Business InsiderSneezing can occur from allergies, the common cold, or any irritation to particles in the air.

Triggered by everything from pollen to pepper, sneezing is an involuntary reflex that can protect us from harmful particles.

And while it is a helpful immune response, repeated and uncontrollable sneezing can also be quite annoying.

Here’s how to figure out the cause of your sneezes and how to treat it, so you can stop sneezing.

Why can’t I stop sneezing?

Sneezing occurs when your nasal passage is irritated or inflamed. This is often caused by foreign particles entering your nose, an allergic reaction, or an infectious illness.

But sneezes can also be a result of other factors. Here are the most common reasons why we sneeze:

Sneezing is one of the most common symptoms of allergic rhinitis, or seasonal allergies.

With seasonal allergies, sneezing is caused by irritation to pollen from trees, grass, or weeds. In other cases, the environmental allergen causing irritation may be dust, mould, air pollution, or animal dander.

A 2015 case study found that 15% to 30% of US adults suffer from allergy-related sneezing, and seasonal allergies, also called hay fever, affects about 7.8% of American adults.

“When you are sick with a cold or flu, the mucous membranes of the nose and throat are irritated, which can also trigger sneezing,” says Edo Paz, MD, at K Health.

This is called infectious rhinitis, and the body identifies the cold or flu as an unwanted foreign particle. Sneezing is also part of how infections can spread, as each sneeze can expel mucus and infectious agents, which can make a cold or flu contagious.

Environmental pollutants or chemicals like cigarette smoke, chlorine, and even heavy perfume or aftershave can trigger sneezing. This is known as idiopathic or vasomotor rhinitis.

Pollution is a big cause of sneezing, and a 2015 study from the Max Planck Institute of Chemistry indicated that nitrogen dioxide and ground-level ozone are triggers for allergies, particularly when combined with humid environments, and numerous studies have linked climate change to an increase in allergies.

In other cases, changes in the air can increase sneezing, such as changing air temperature, dryness, or humidity.

Many people detoxing from drugs commonly experience sneezing. This is particularly common in opioid withdrawal.

Drugs and alcoholsuppress the immune system, and as the body tries to regain balance, sneezing is a common reflex. This will go away on its own as you detox, usually in around three days.

This is known as ‘photic sneezing’ or ‘ACHOO syndrome’ (Autosomal Cholinergic Helio-Ophthalmologic Outburst) and occurs when you are exposed to bright light, like driving out of a dark tunnel into sunshine.

A 2010 study suggests this affects one in four people, and links the strange phenomenon to a miscommunication in the brain between visual and sensory signals.

When to see your doctor for sneezing

While sneezing can be irritating, it’s only a cause for concern in certain cases.

“A health concern would be for those who have compromised immune systems, as this can lead to chronic problems or turn into bacterial infections,” says J. Nicholas Bartolozzi, Physician Assistant with Concierge MD in Los Angeles.

How to stop sneezing

Sneezing is an involuntary reflex, which means it’s hard to prevent on the spot. And while there are some situations when you might want to stop a sneeze, like when your nose is bleeding, it’s generally not recommended.

Preventing a sneeze is not a good idea. “Whenever our body perceives a foreign invader, in this case an irritant, our body sneezes in order to protect itself,” Bartolozzi says.

Instead, Paz recommends treating the underlying cause of your sneezing.

“This can include treating your allergies, clearing your nasal passages with saline rinse, or taking a nasal decongestant to clear extra mucus while you are sick,” he says.

Here are some of the best ways to prevent sneezing before it occurs:

Medication like antihistamines, nasal sprays, and decongestants can help mitigate sneezing and other allergy symptoms on a short-term, day-to-day basis.

Immunotherapy (allergy shots) offers a more long-term solution – the American College of Allergies, Asthma and Immunology reports that it can reduce symptoms by 85% for those with allergic rhinitis.

If dust or mould is a trigger for your sneezes, you should ensure good ventilation and regular cleaning. “It’s recommended to frequently wipe down surfaces that collect dust, vacuum and open windows when possible,” says Paz.

If air dryness or humidity triggers sneezing, having a dehumidifier or humidifier in your home can also help. Finally, don’t rent a place with carpet: a 2018 study found carpet flooring collects significantly more dust, animal dander, and mould than smooth floors like tiles or laminate, and was linked to an increase in allergies.

A 2018 study of the N95 respiratory mask showed that it was able to block large and small particles, from influenza to pollution, which could help reduce irritation.

Plus, recent studies have found that particles from a sneeze can travel at speeds of up to 100 feet per second, spreading up to eight meters – so if you are sick, wearing a mask will help prevent you from spreading your germs elsewhere.

In addition to standard surgical masks, the CDC’s recent guidelines say cloth masks work to prevent the spread of viruses through respiratory droplets. And you can make your own cloth mask at home.