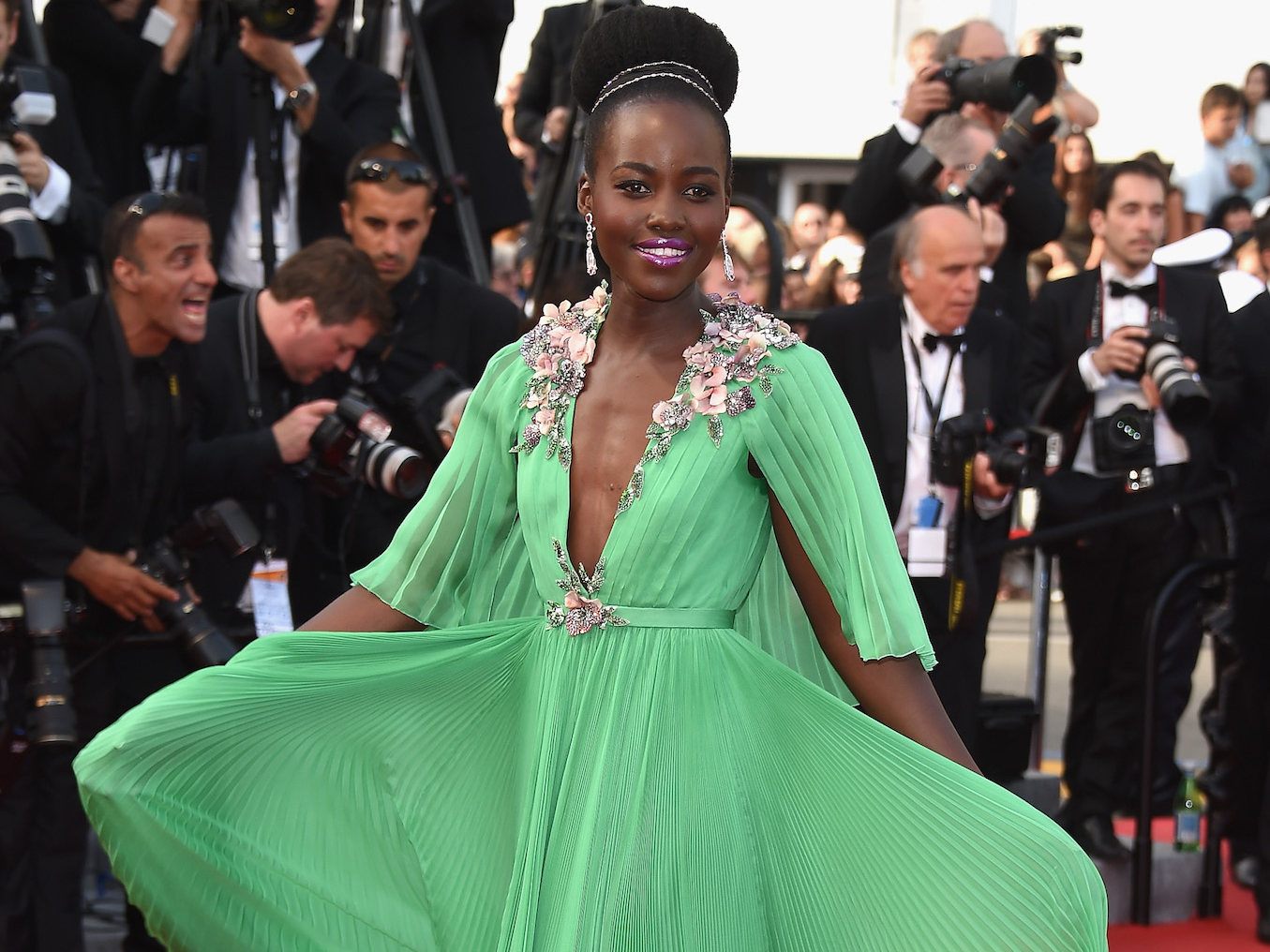 The Cannes Film Festival is typically held each year at the Palais des Festivals in Cannes, France, to showcase upcoming films. The invitation-only event is attended by A-list stars and media executives, and has a long history dating back to 1946 when the first full festival was held.

While films are the main focus of the festival, fashion also plays a big role. In previous years, celebrities from Blake Lively to Kendall Jenner have attended the festival wearing glamorous gowns. Other stars, such as Kristen Stewart, have also shown up in menswear. And before them, actors like Sophia Loren and Jayne Mansfield stole the show with their ensembles.

This year, the event isn’t taking place, but it’s still fun to look back at some of the best outfits celebrities have worn to the Cannes Film Festival throughout its history.

In 1958, actress Jayne Mansfield arrived at the festival wearing a dress with spaghetti straps. 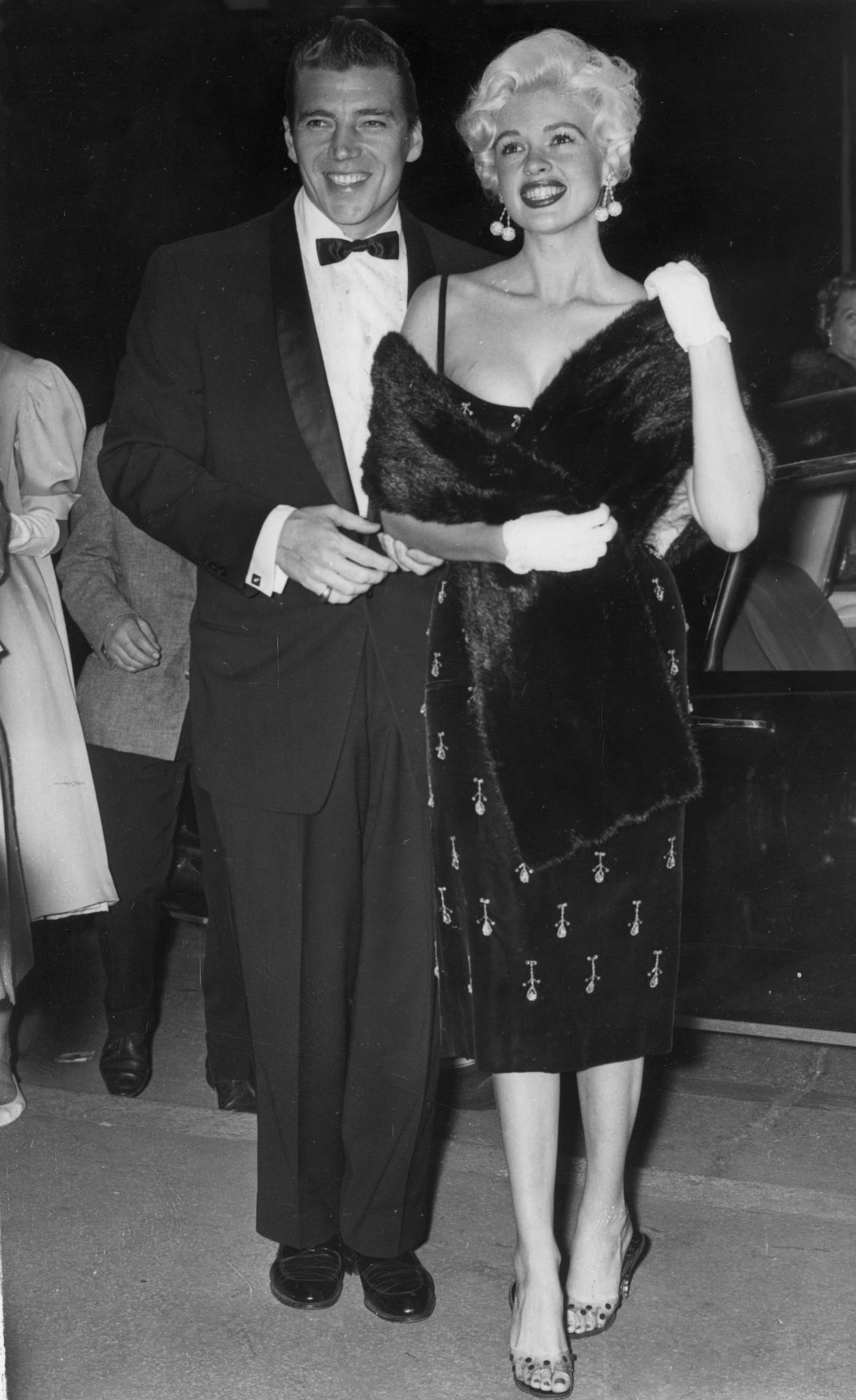 Her dress featured a simple print, and was accessorized with a fur shawl. She also donned cherry-shaped earrings and short sandal heels. 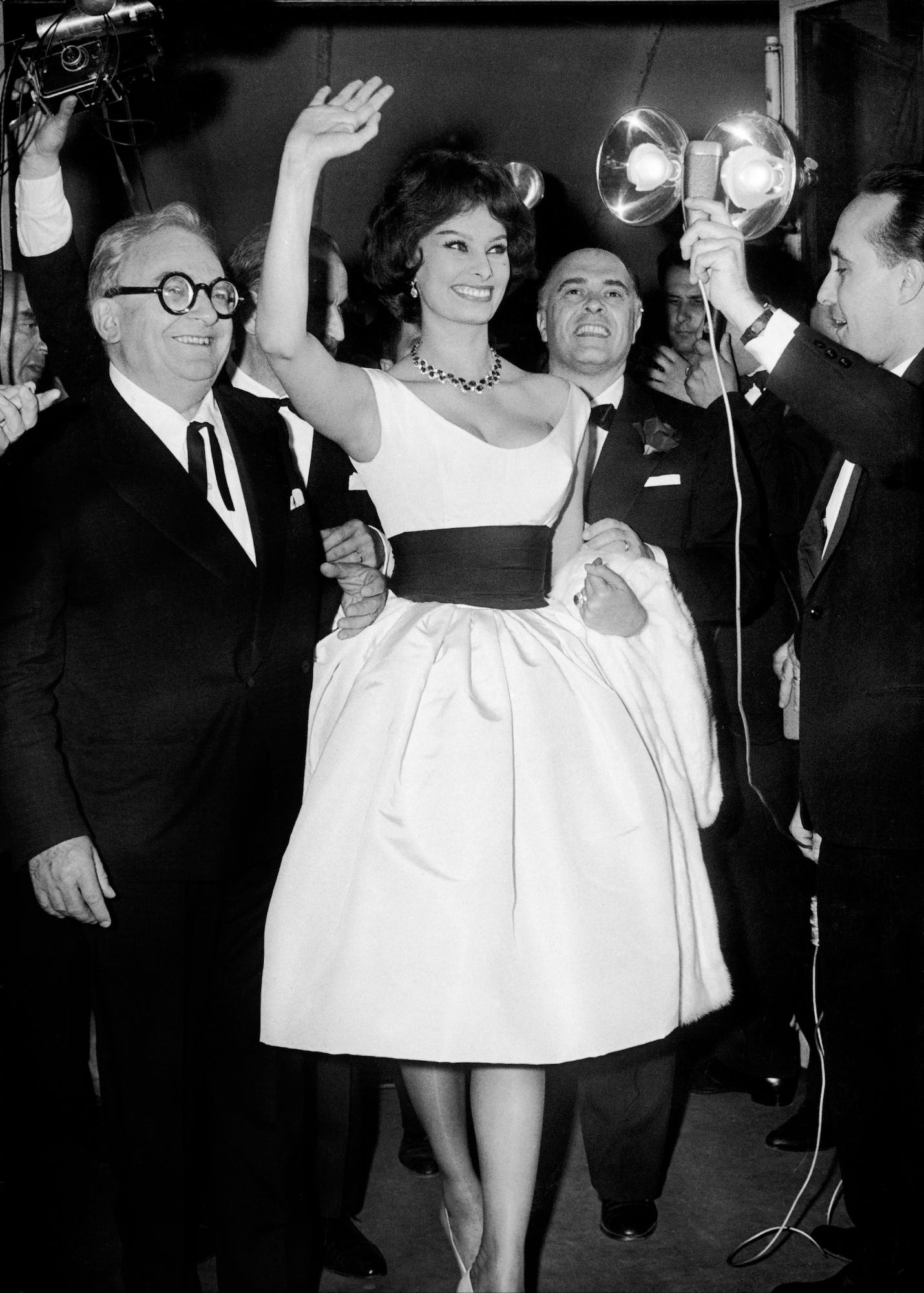 She wore a voluminous, scoop-neck dress with a black band around the waist. She also accessorized with a diamond necklace.

Bianca Jagger helped to start the “naked” trend at the 1975 event. Her dress featured a sheer bodice with a leaf print, as well as a black skirt. To complete the look, Jagger wore a velvet beret.

Princess Diana made a royal entrance at the Cannes Film Festival in 1987. 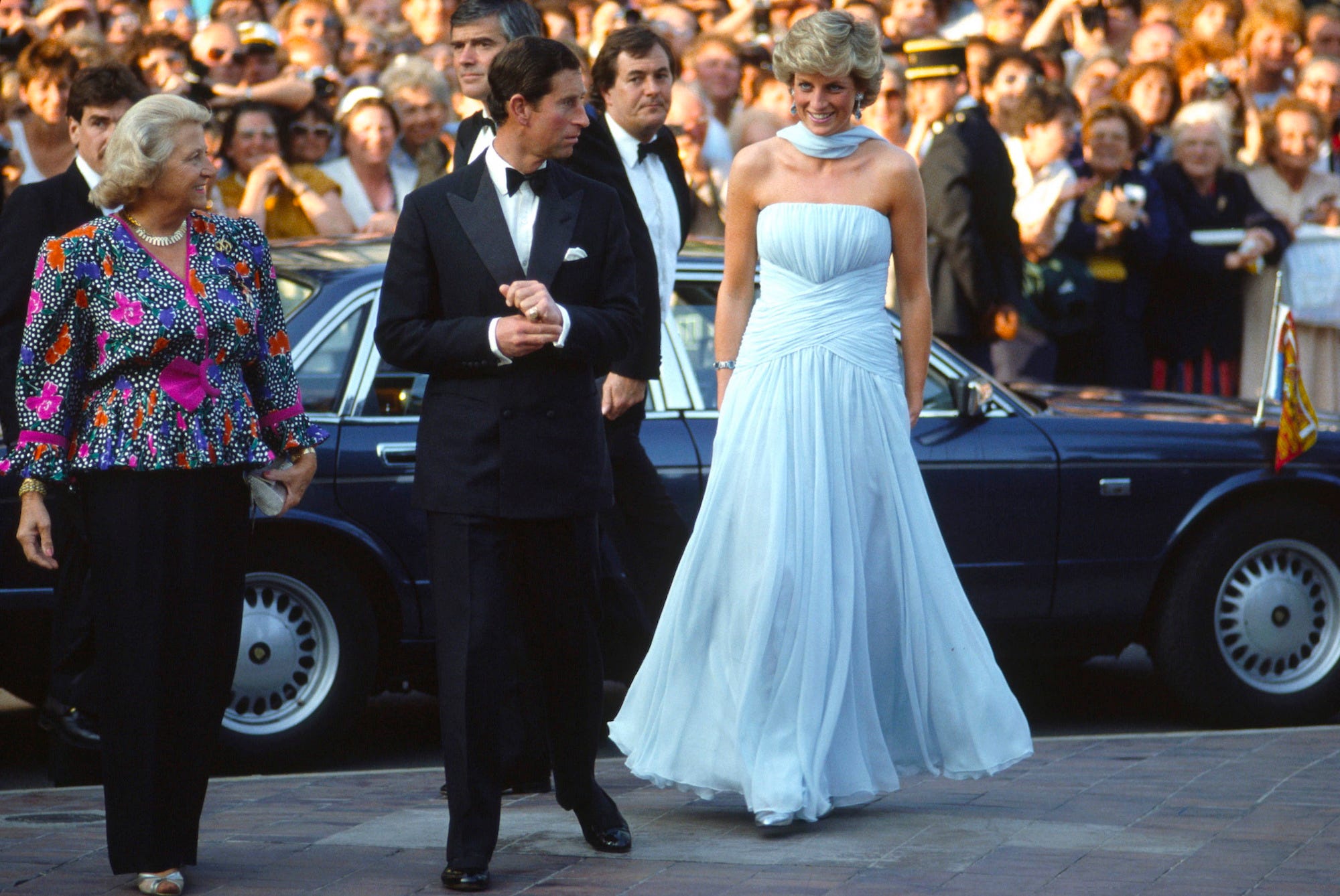 She wore a blue strapless gown with a matching stole to the event. Her ensemble was designed by Catherine Walker.

In 1999, Salma Hayek wore a two-piece ensemble to the festival. 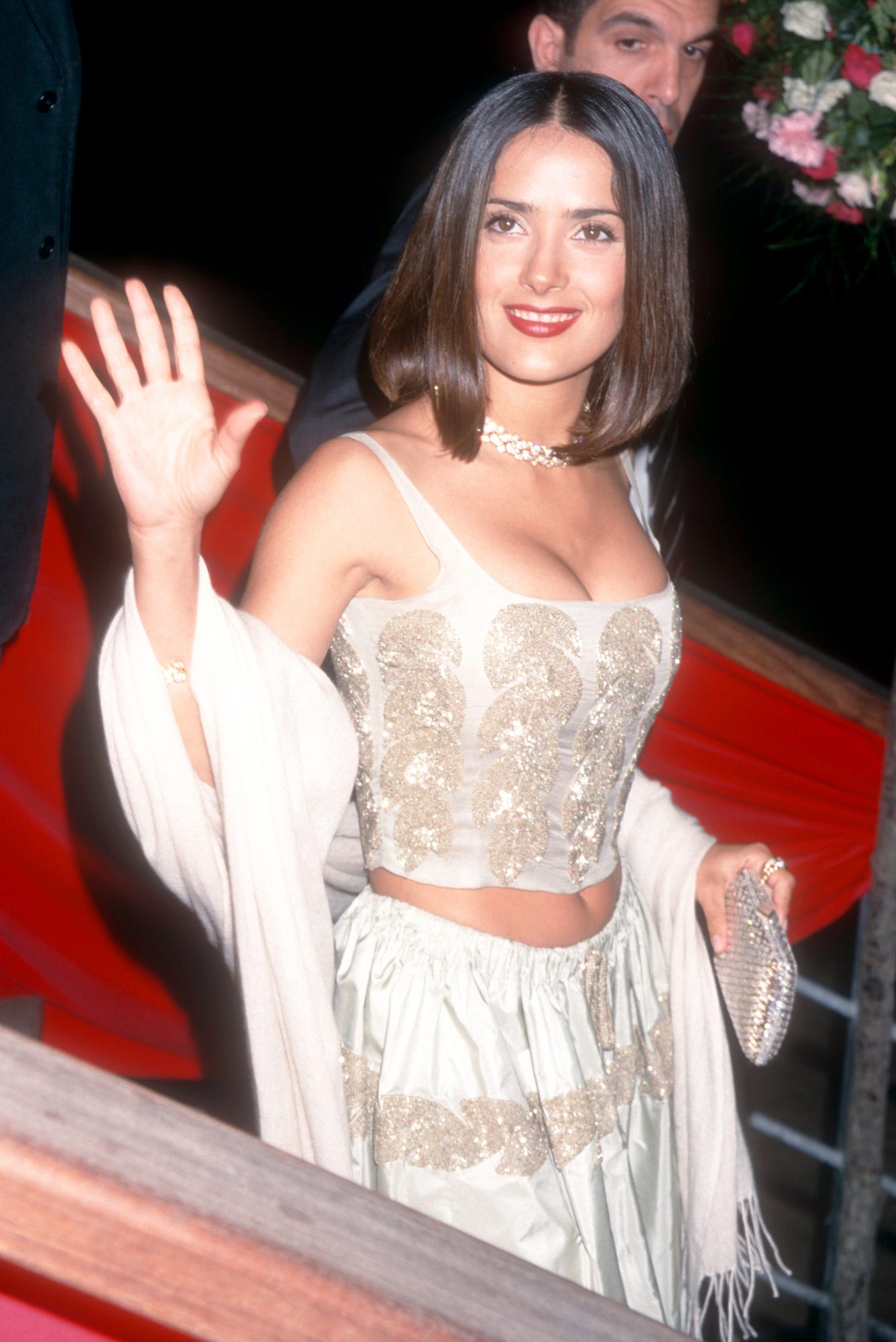 She donned an off-white tank top with gold sparkles, matching skirt, and a shawl that she draped around her arms.

Angelina Jolie lit up the red carpet at the 2007 event. 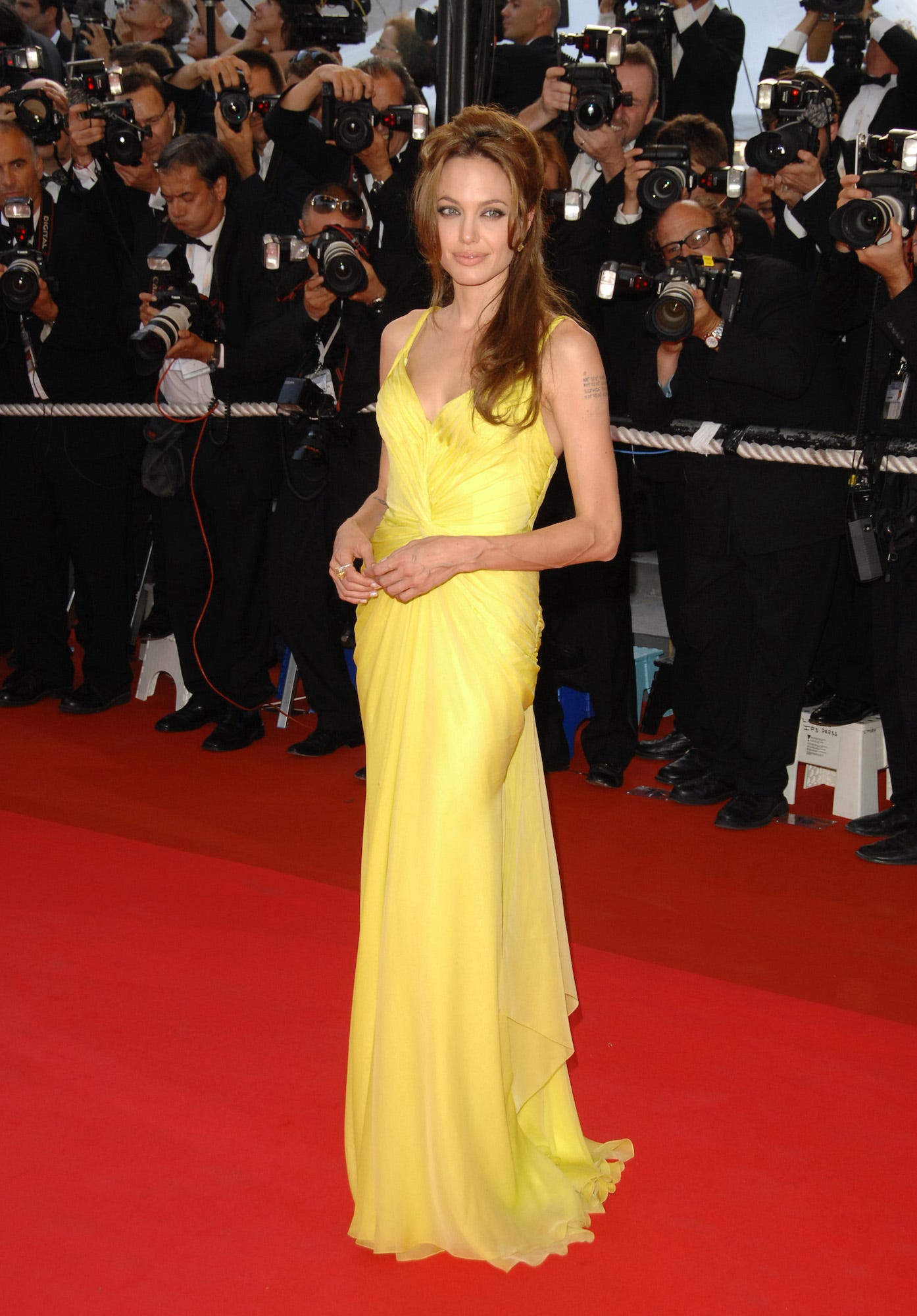 Her yellow, Emanuel Ungaro gown was sleeveless, and showed off a tattoo on her left arm.

Eva Longoria chose to wear an elegant white gown with a single strap in 2008. 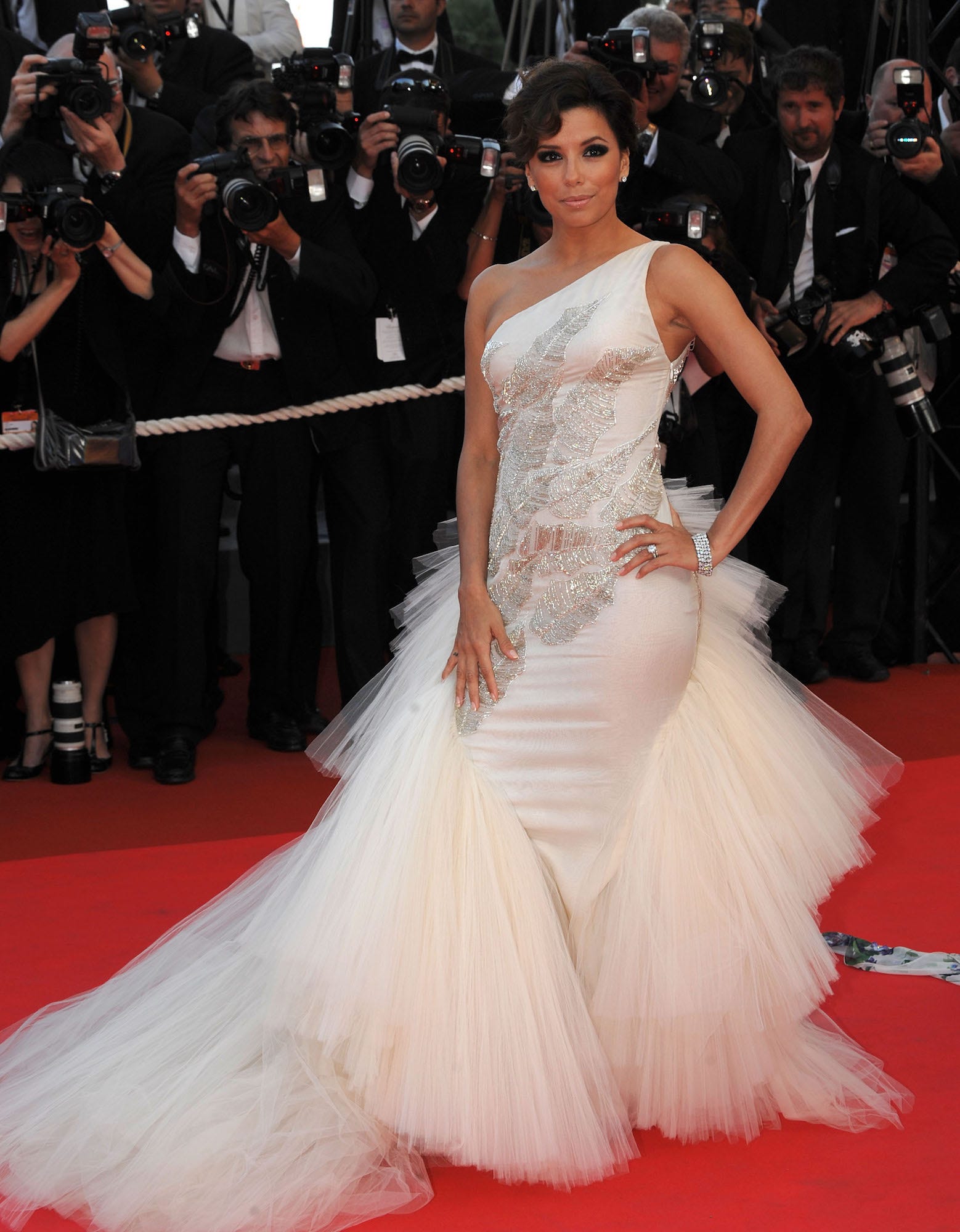 She wore the ruffled gown to the premiere of “Kung Fu Panda.”

Penelope Cruz arrived at the 2009 festival wearing a purple dress with draped sleeves. 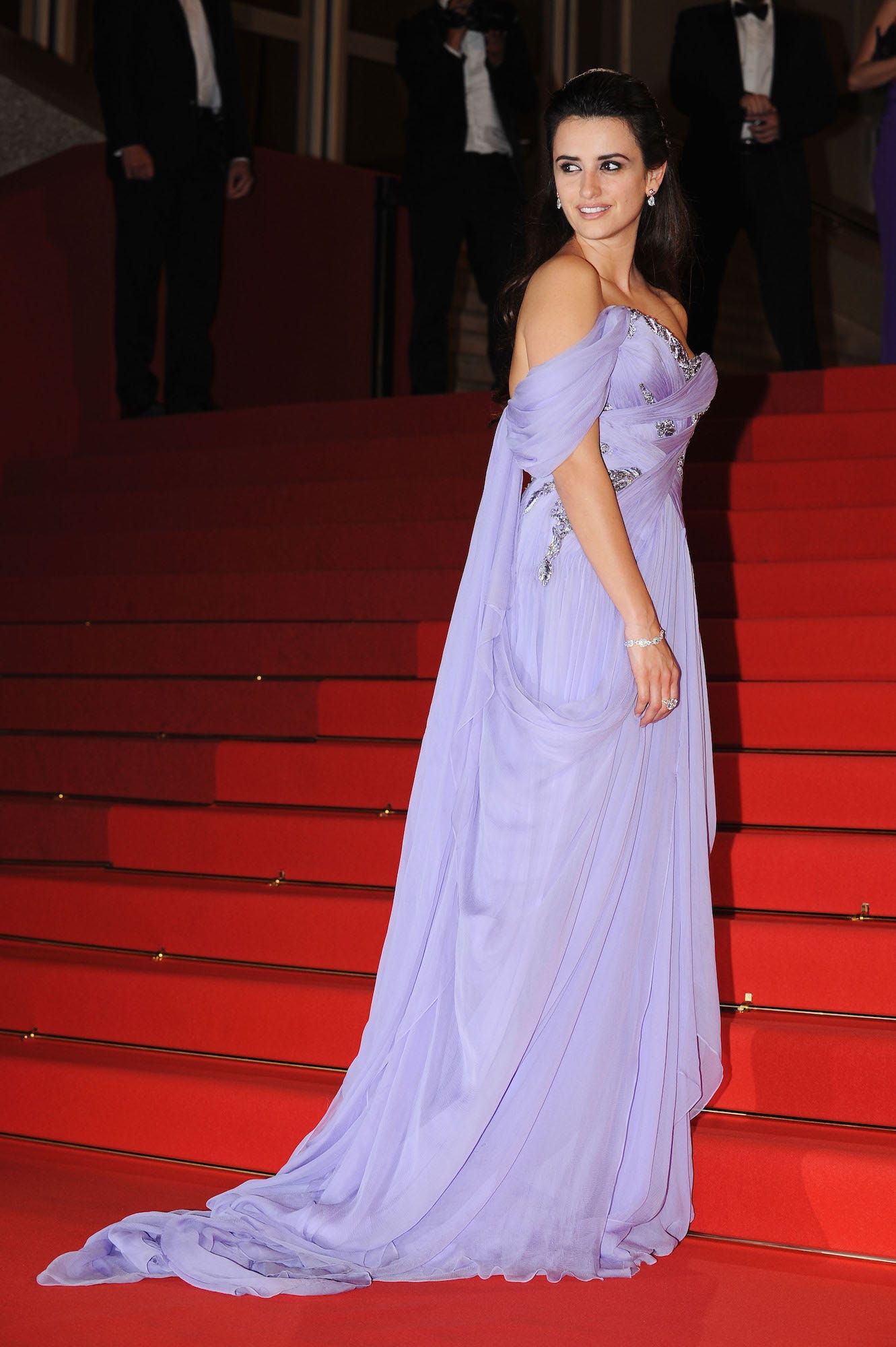 Her strapless dress also had sparkling details and a short train.

Naomi Campbell dazzled on the red carpet in 2010. 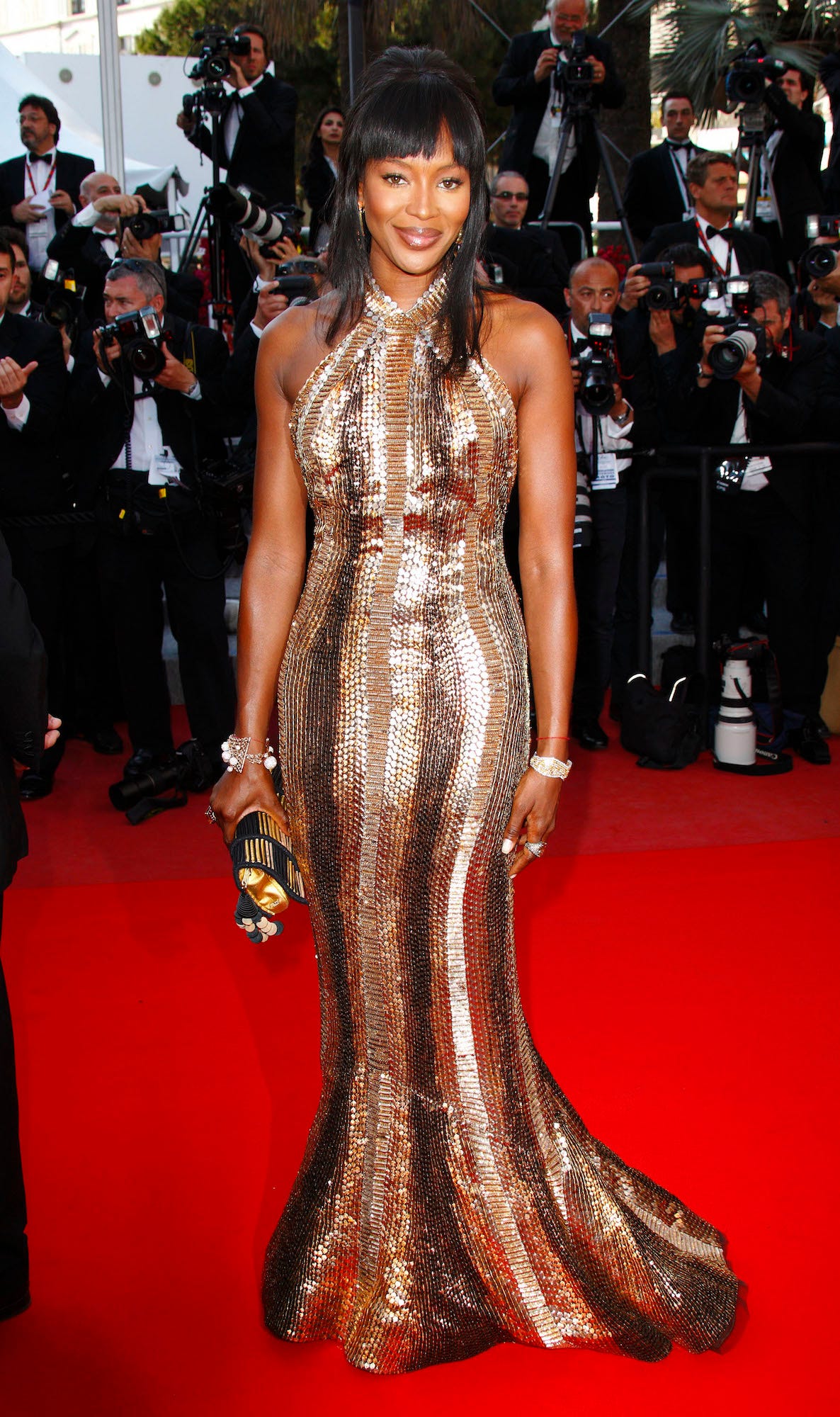 While attending the “Biutiful” premiere, the model wore a halter-style dress with stripes of brown, white, and gold sequins. It was designed by Roberto Cavalli.

Zoe Saldana rocked a red-and-white strapless dress at the “The Tree Of Life” premiere in 2011. 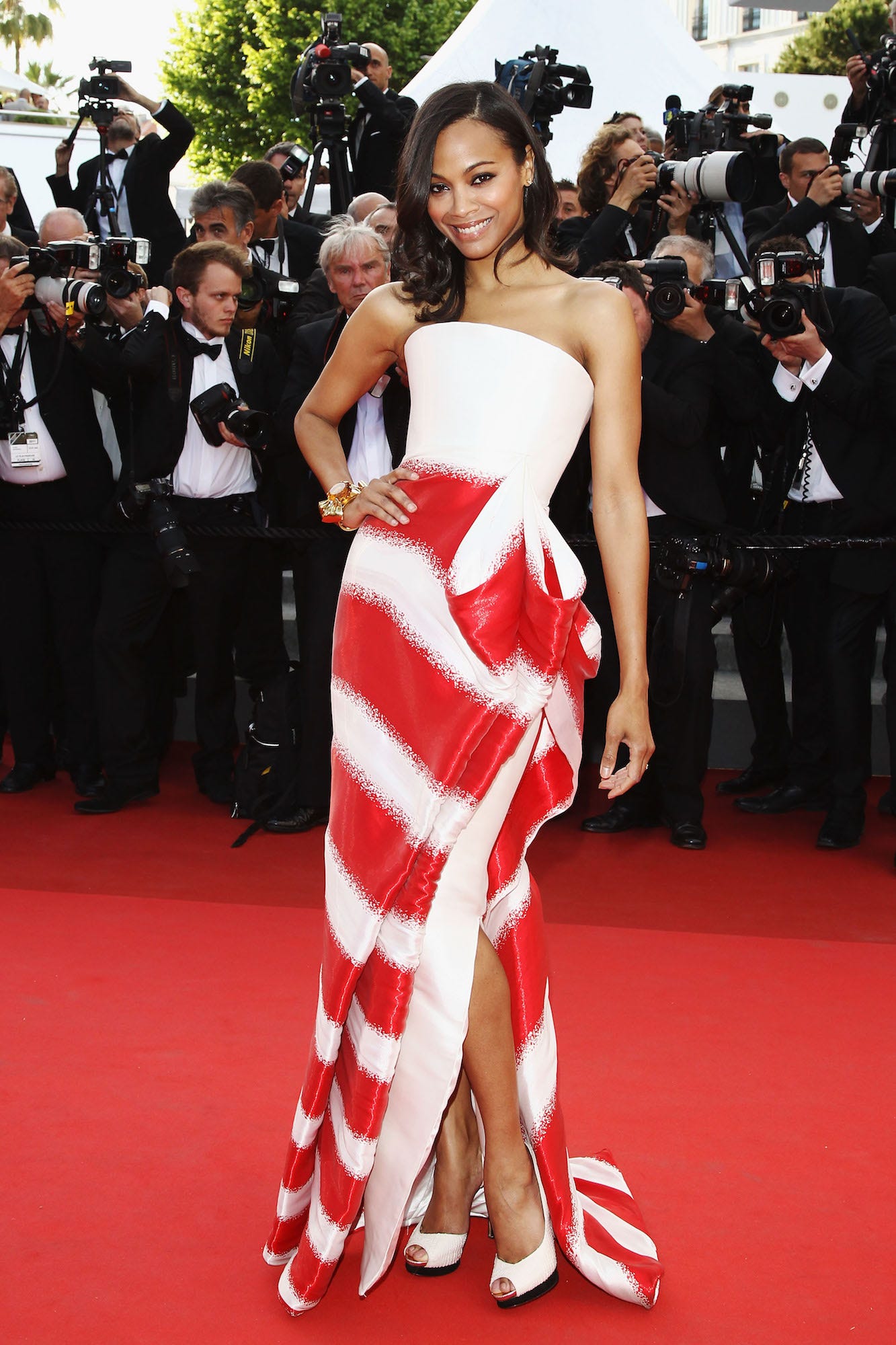 She paired the Armani Privé look with simple white heels and a colourful bracelet.

In 2012, Jessica Chastain sparkled on the red carpet in a gold gown. 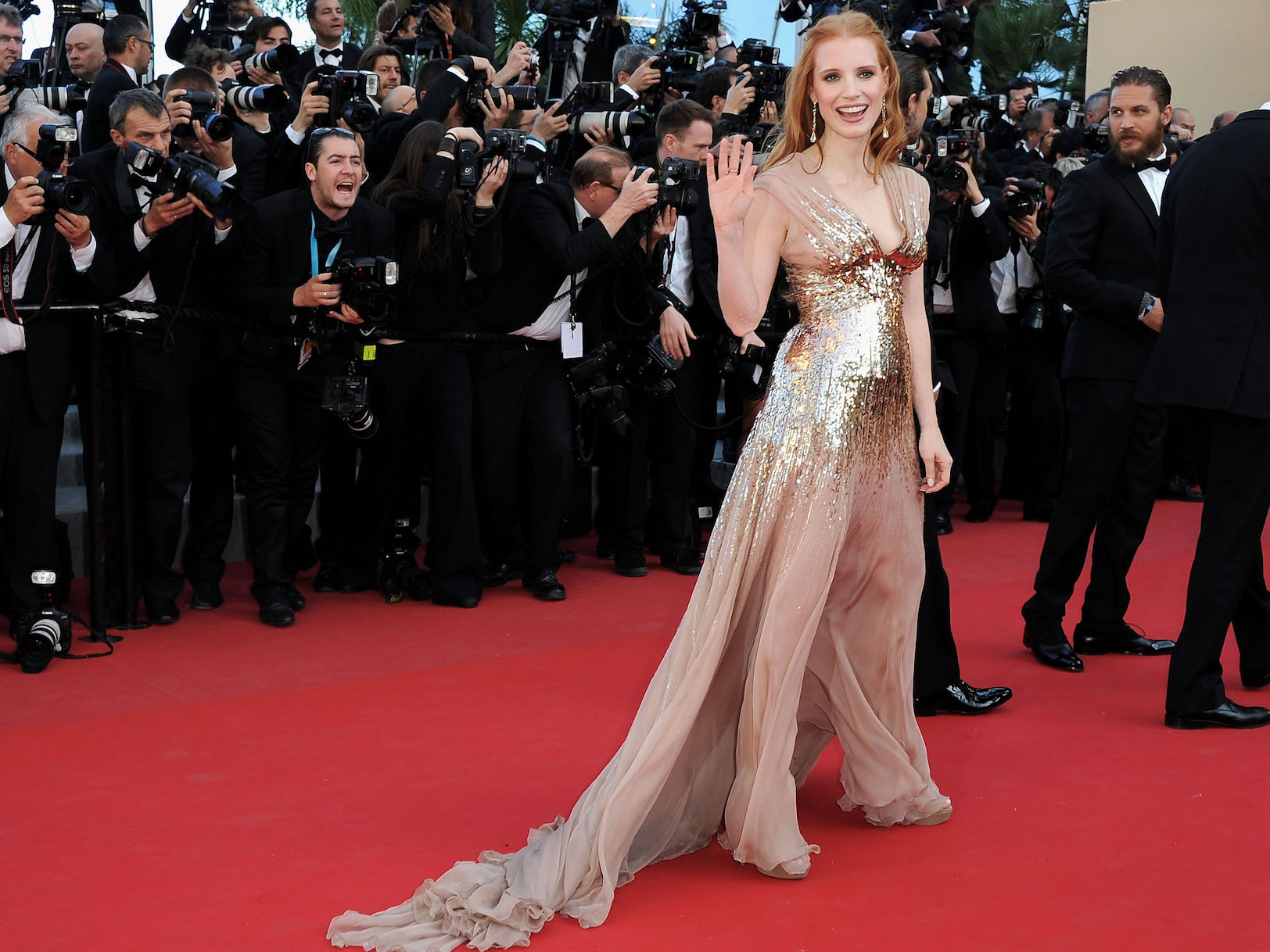 Chastain completed the look with dangling earrings and a pulled-back hairstyle. 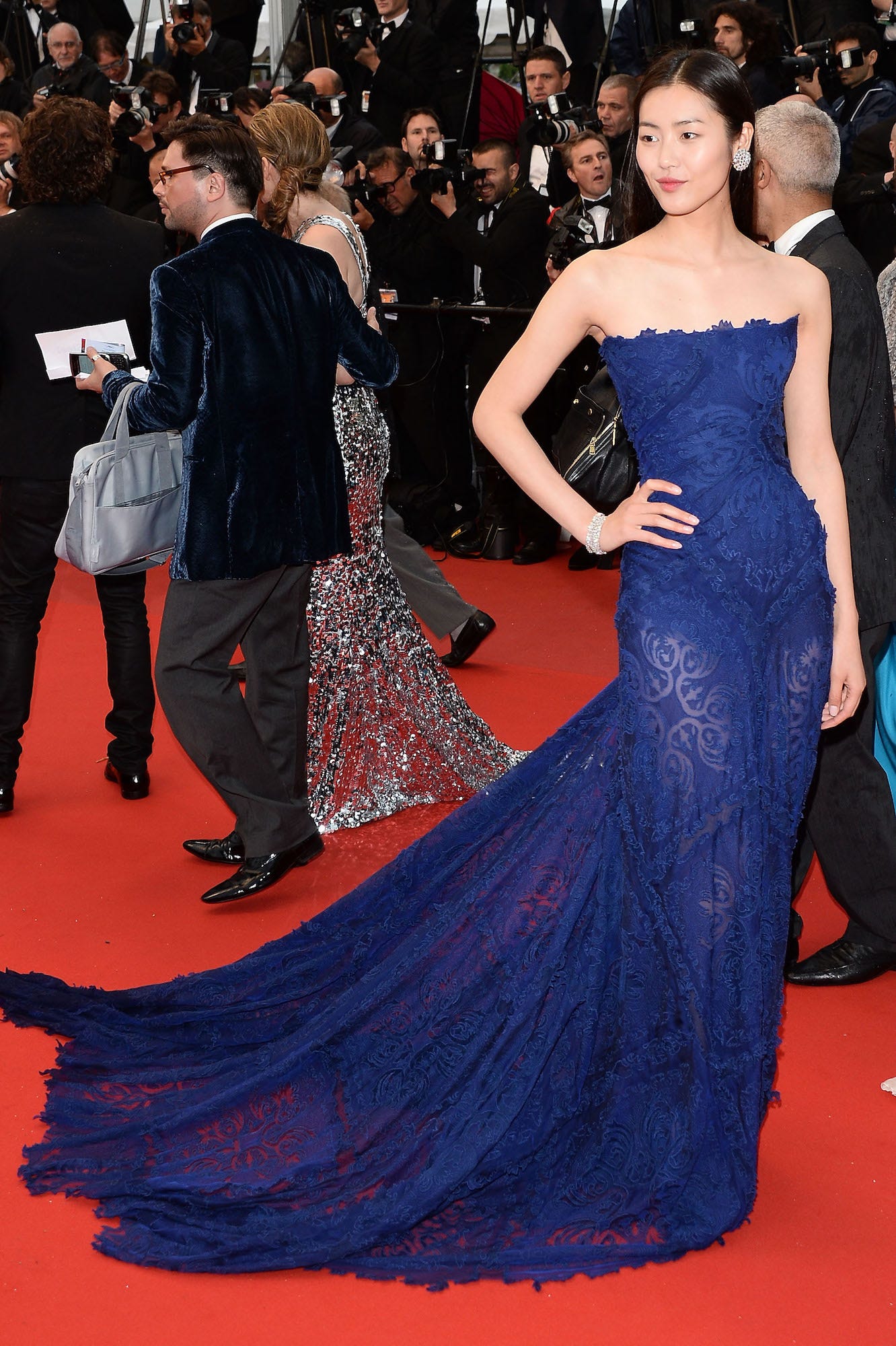 Her strapless Roberto Cavalli gown had a sheer skirt and featured a long train. She wore the ensemble while at the premiere of “All Is Lost.” 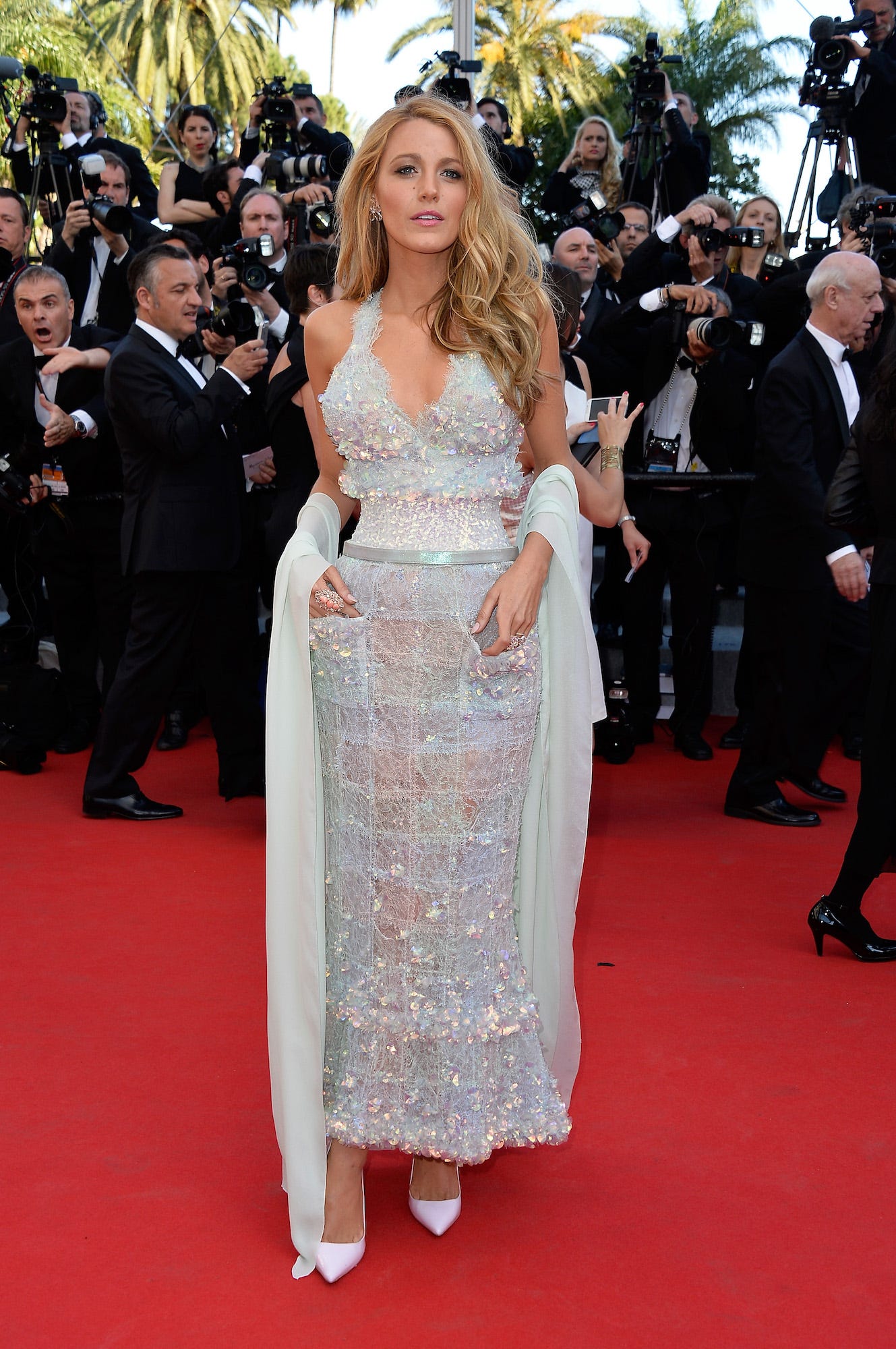 In addition to her Chanel Couture gown, Lively also carried a sheer shawl into the premiere of “Mr. Turner.”

Lupita Nyong’o opted for a bold dress with a flowing skirt in 2015. 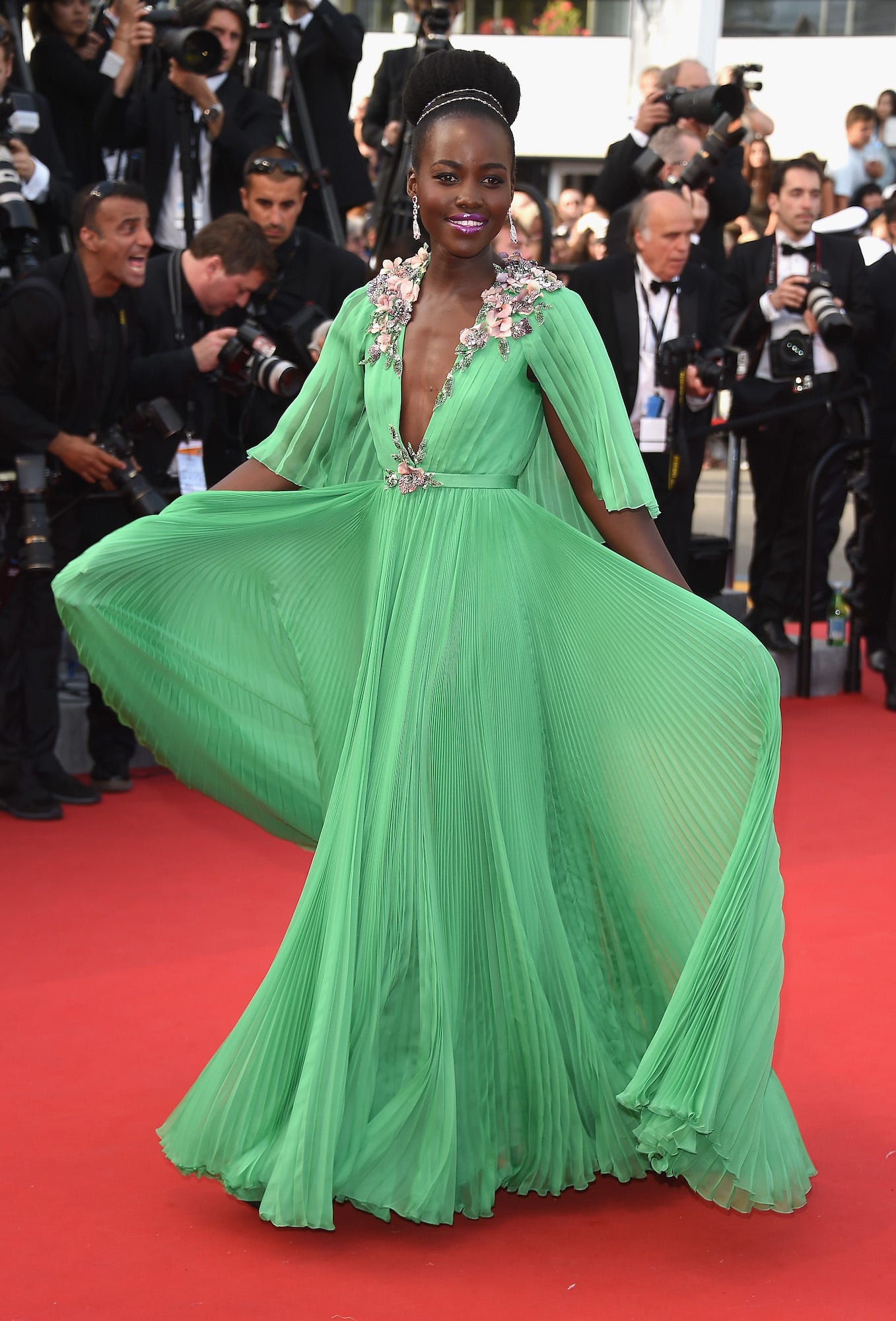 Her custom Gucci dress also had a plunging neckline, a short cape across her back, and pink flower embellishments attached to the shoulders and waistline. 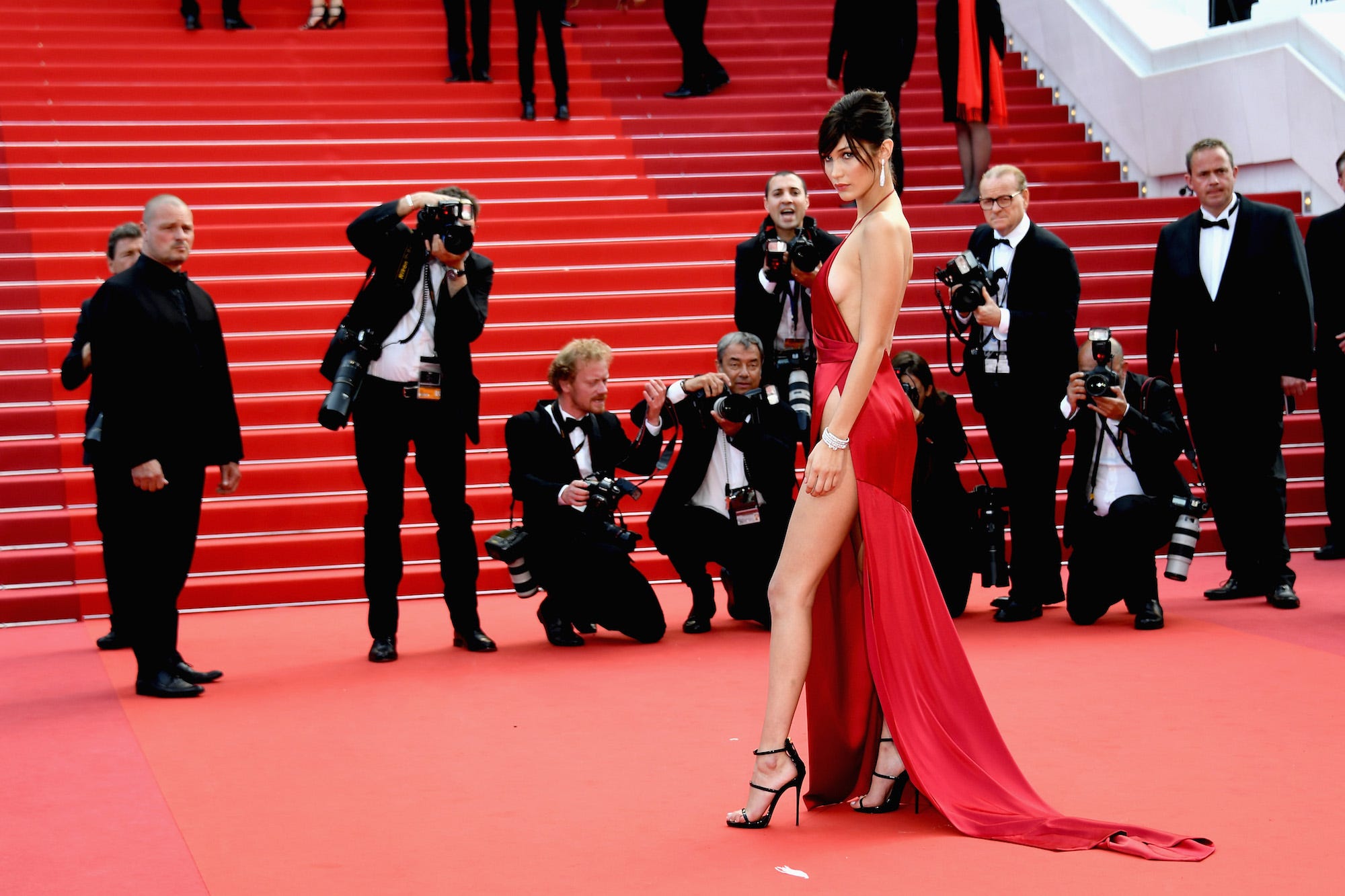 Her custom Alexandre Vauthier Couture gown featured a thigh-high slit and plunging bodice. She completed the look with an updo hairstyle and tall black heels.

Model Jourdan Dunn looked like a princess at the 2017 Cannes Film Festival. 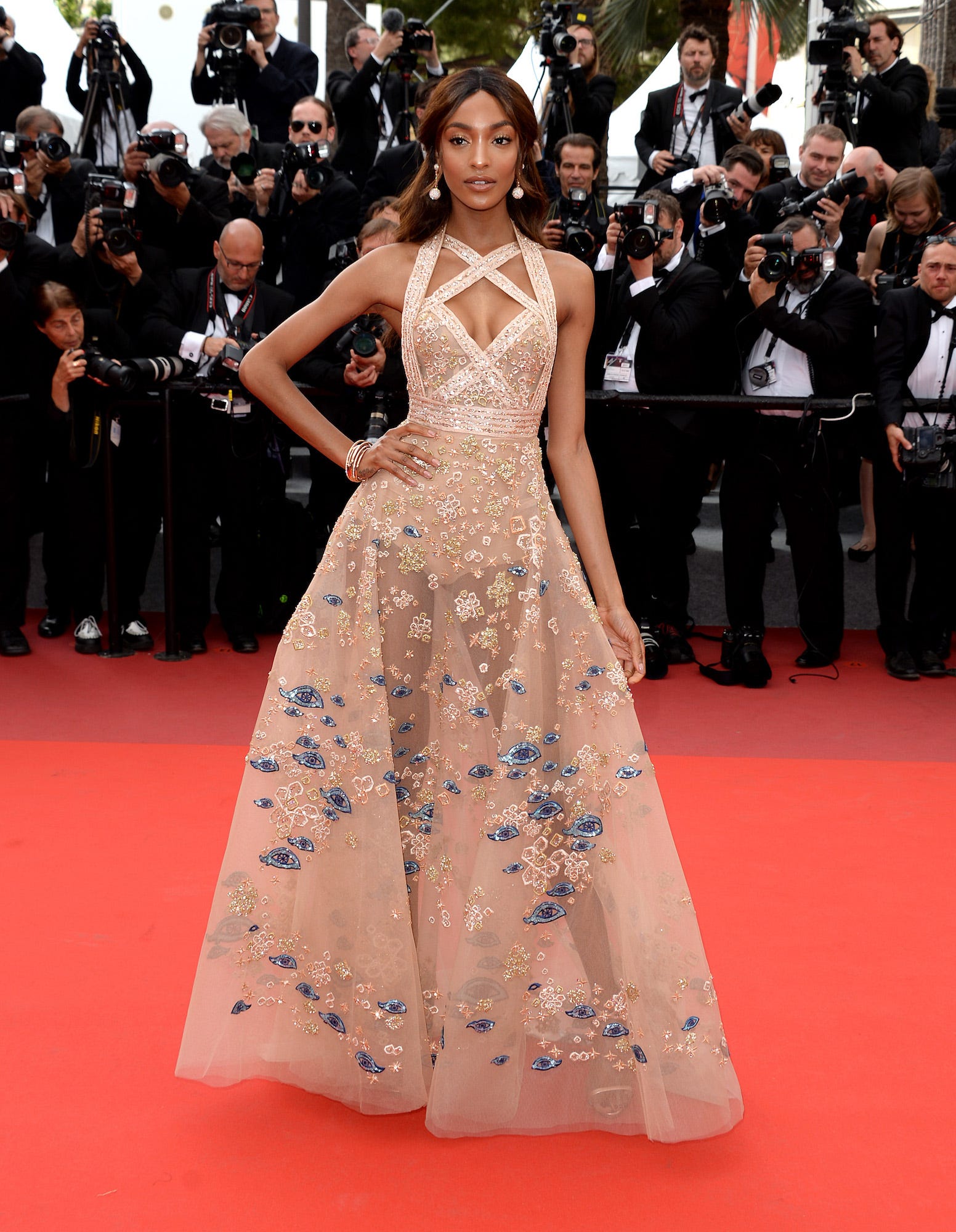 She attended a screening of “The Killing of a Sacred Deer” while wearing an Elie Saab ball gown with floral details. 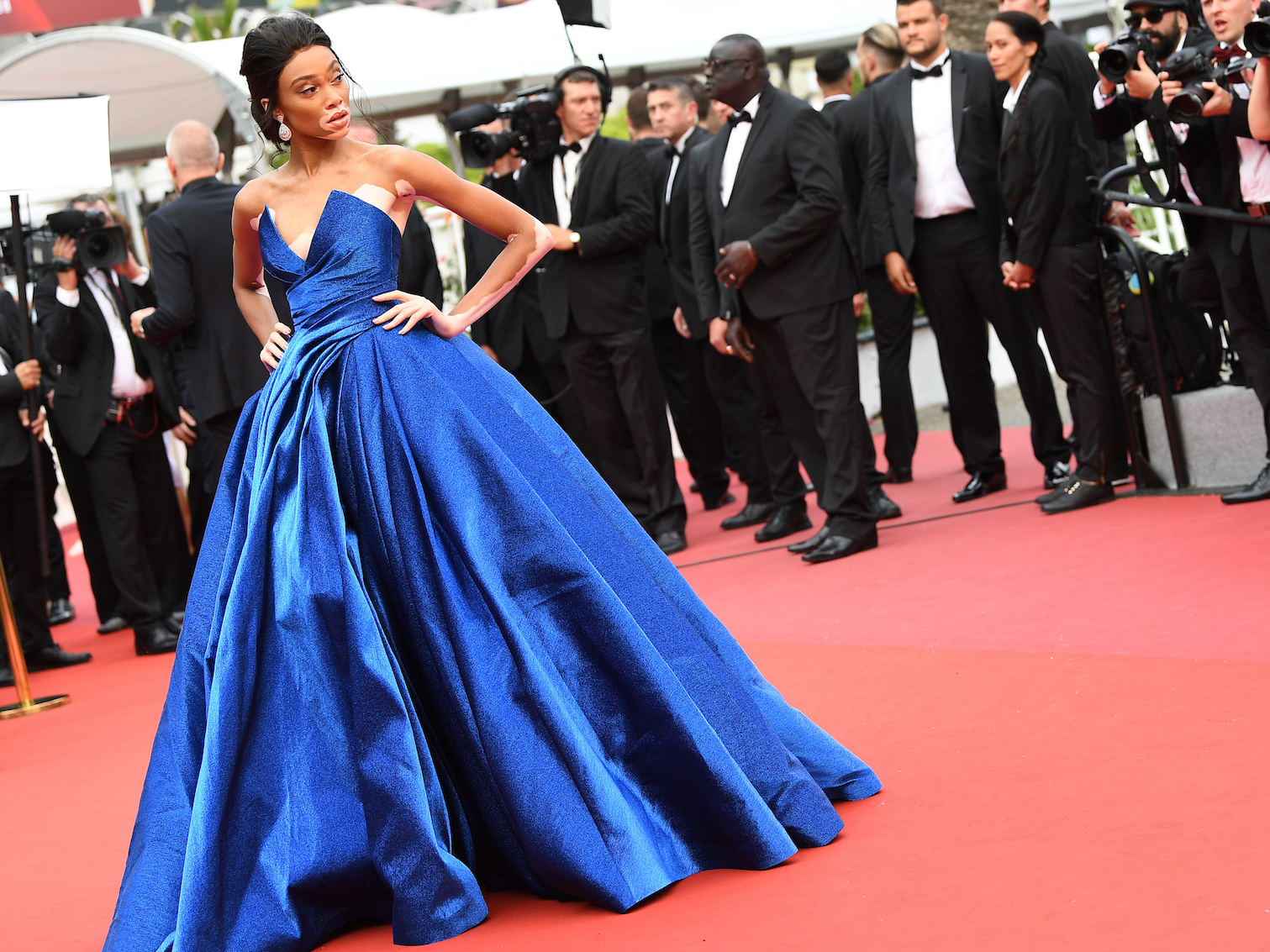 She wore the stunning Zuhair Murad dress to a screening of “Loveless (Nelyubov).”

Rihanna, on the other hand, added some flair with sunglasses. 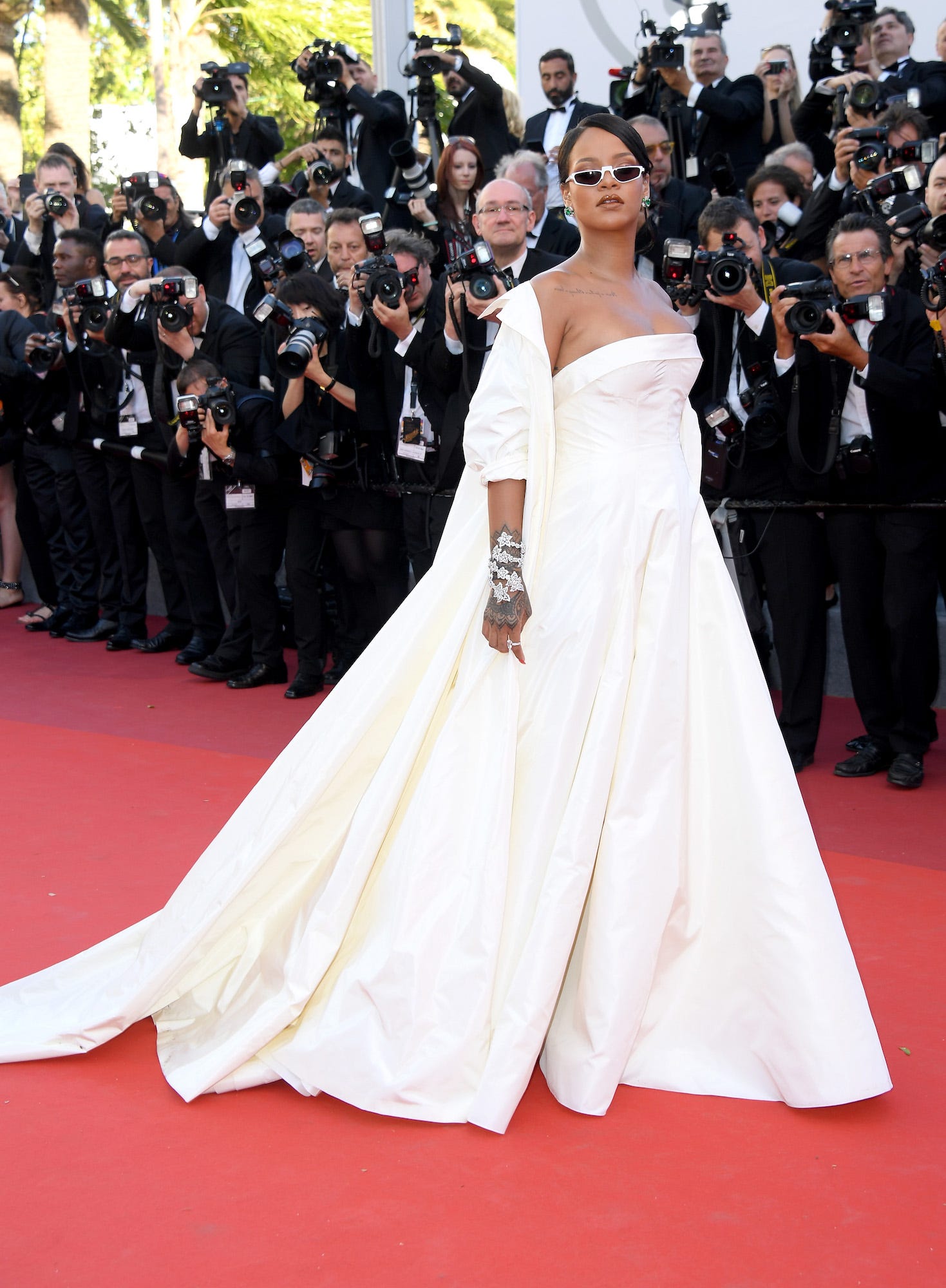 She walked the red carpet in a strapless Dior Haute Couture gown, with a matching jacket worn loosely around her arms. Rihanna also donned a small pair of white sunglasses, and a diamond star-shaped bracelet.

Kendall Jenner looked glamorous in a sheer gown with a plunging neckline at the 2018 festival. 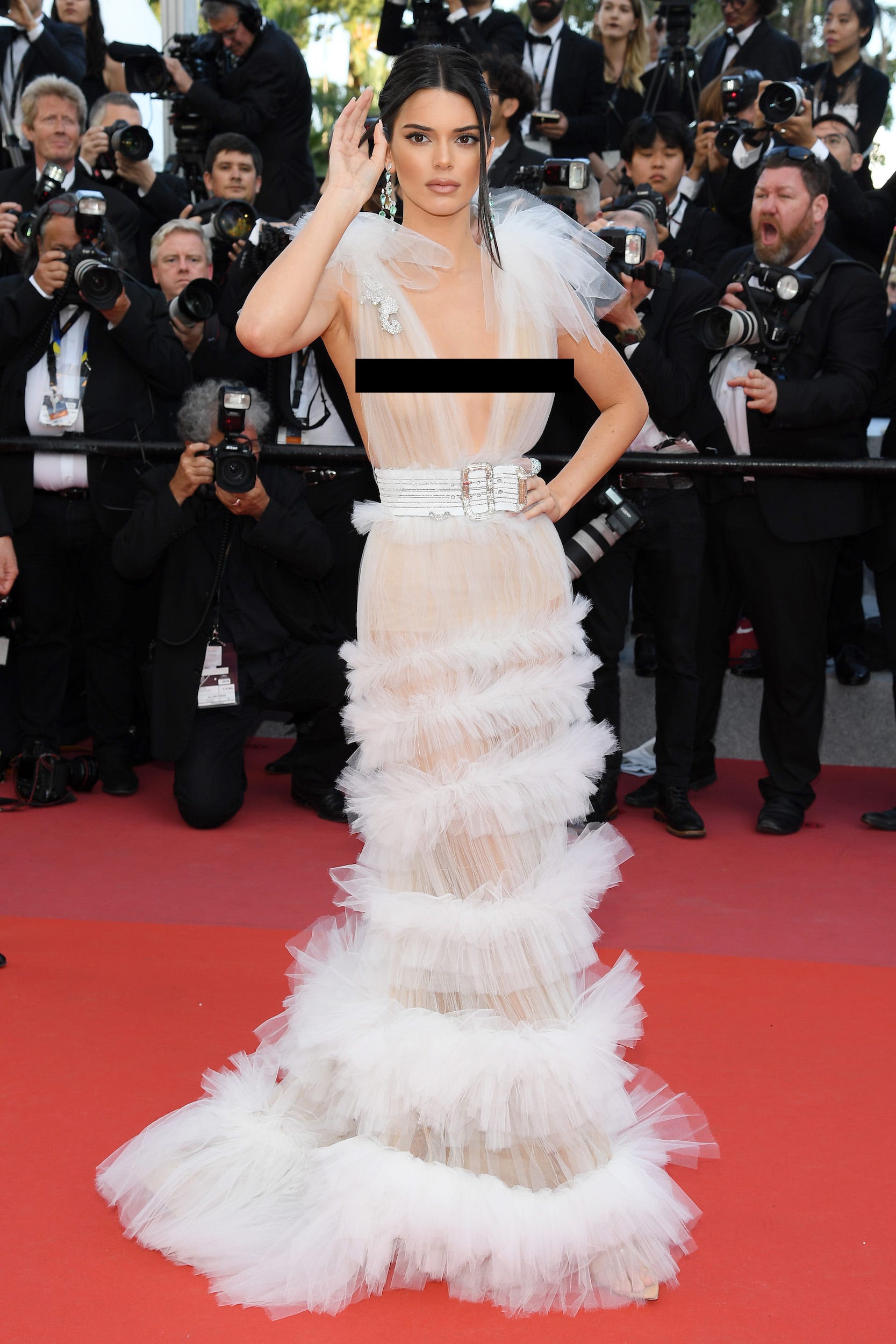 She wore the white Schiaparelli Haute Couture dress with ruffle detailing at a screening for “Girls Of The Sun (Les Filles Du Soleil).” 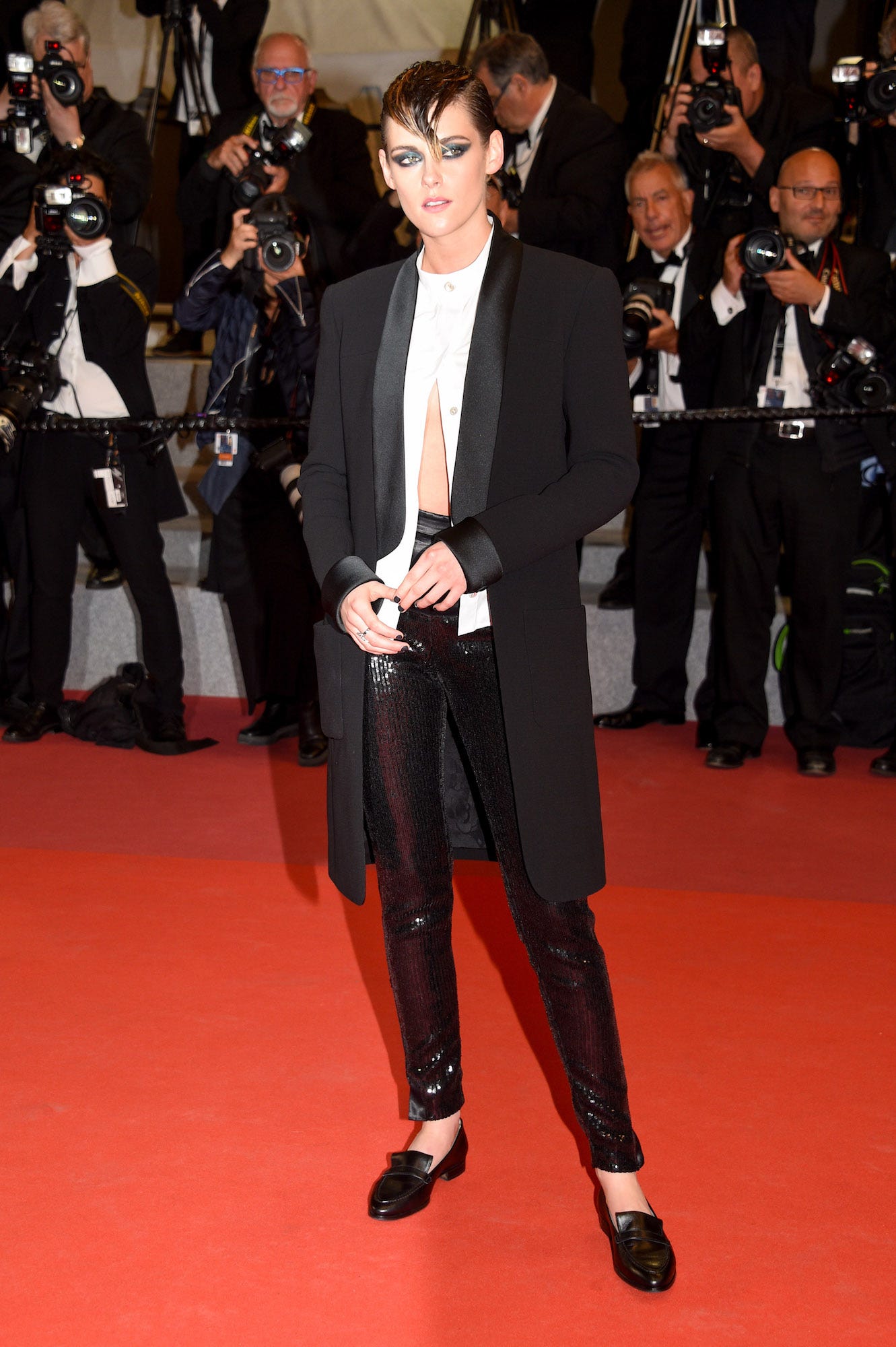 Her footwear technically broke a rule on the Cannes Film Festival red carpet; the festival has required women to wear heels at the event. Stewart also protested the policy by taking off her heels on the Cannes red carpet before a screening of “BlacKkKlansman” that same year.

Elle Fanning turned heads with a cream-coloured gown at the 2019 Cannes Film Festival. 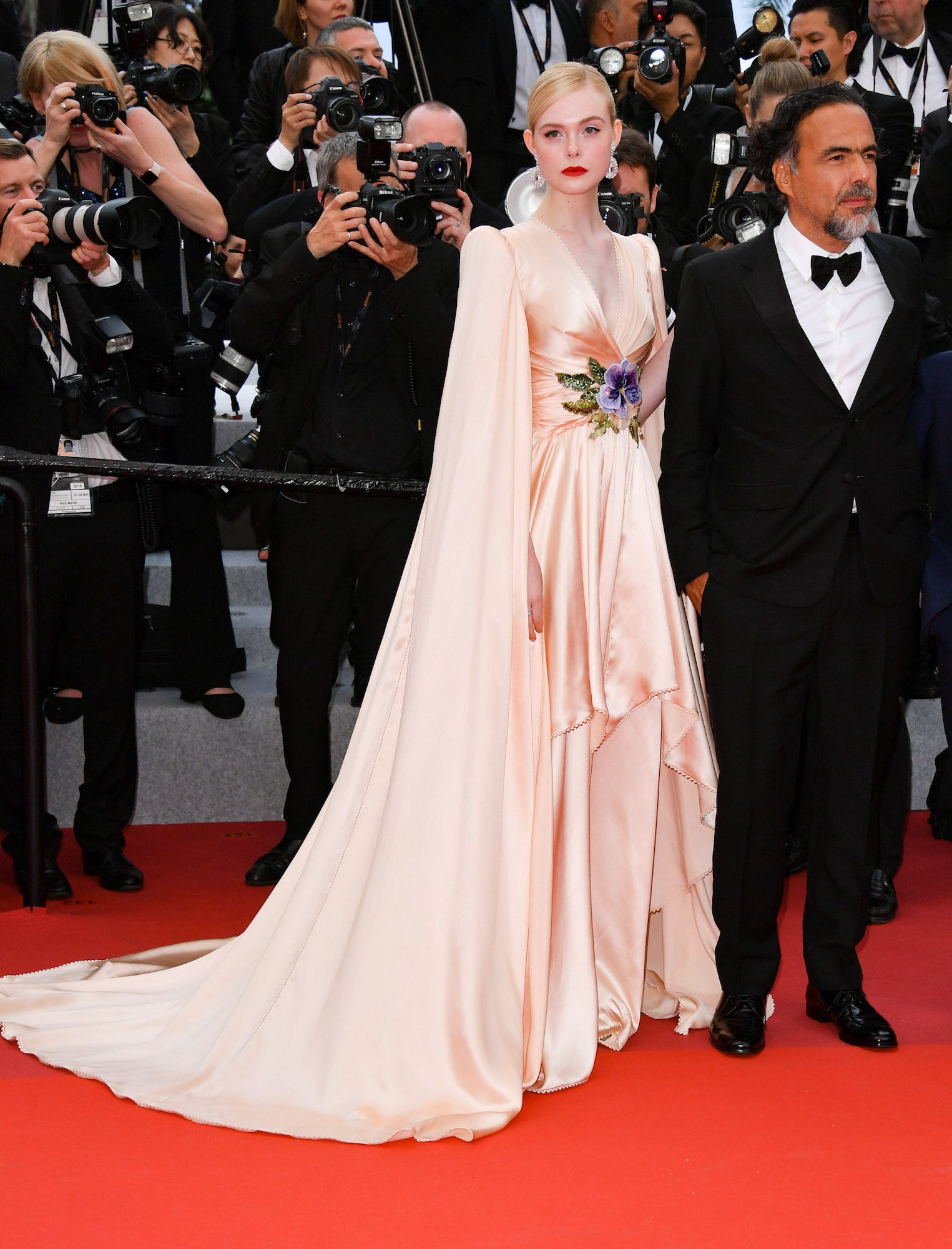 The actress looked radiant in her Gucci gown, which featured a purple flower detail attached to the bodice, and a long cape that cascaded down the back. She wore the look to attend a screening of “The Dead Don’t Die.” 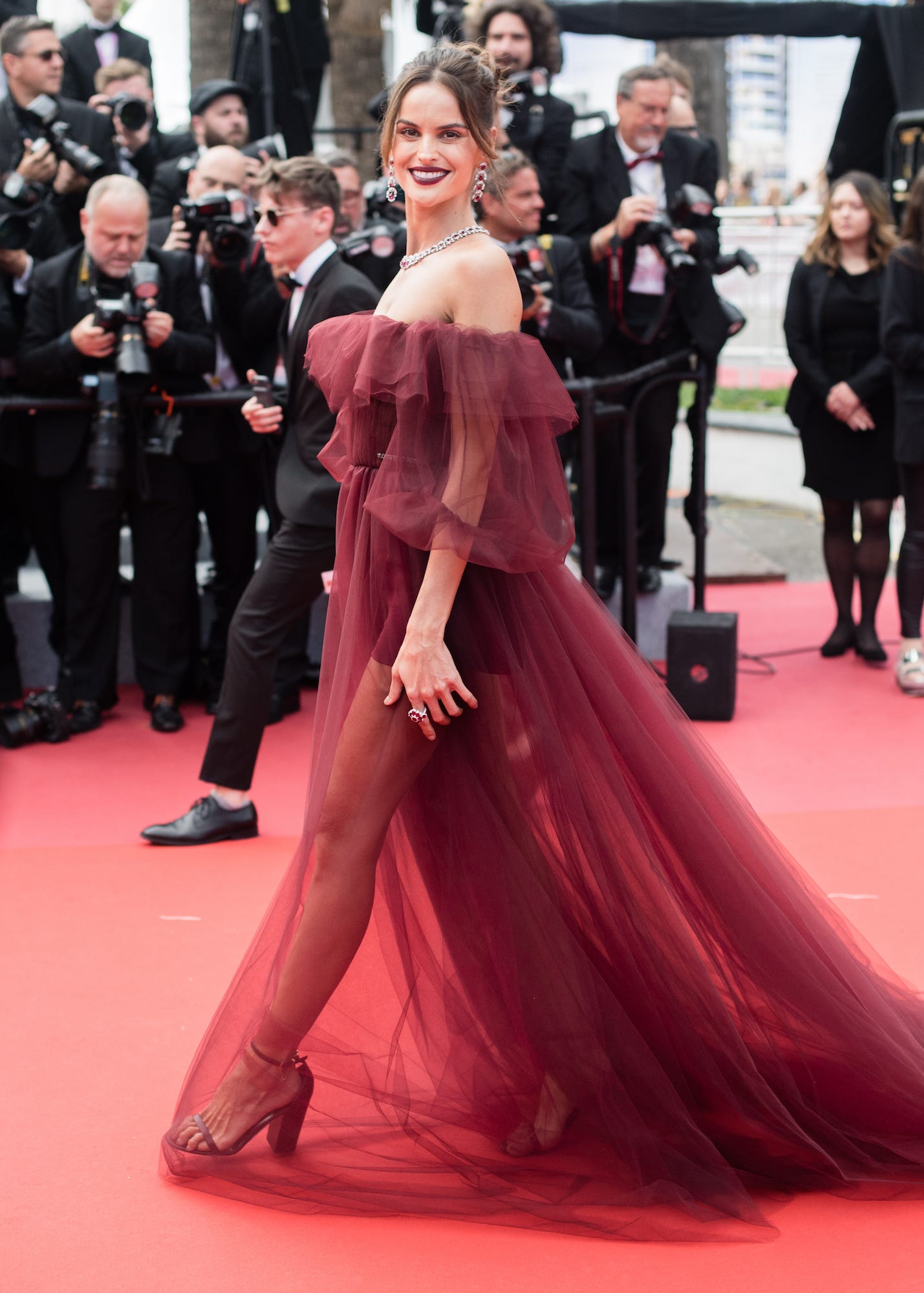 Her ensemble was actually comprised of a maroon bodysuit and sheer overlay, which turned the look into an off-the-shoulder gown with a flowing skirt. 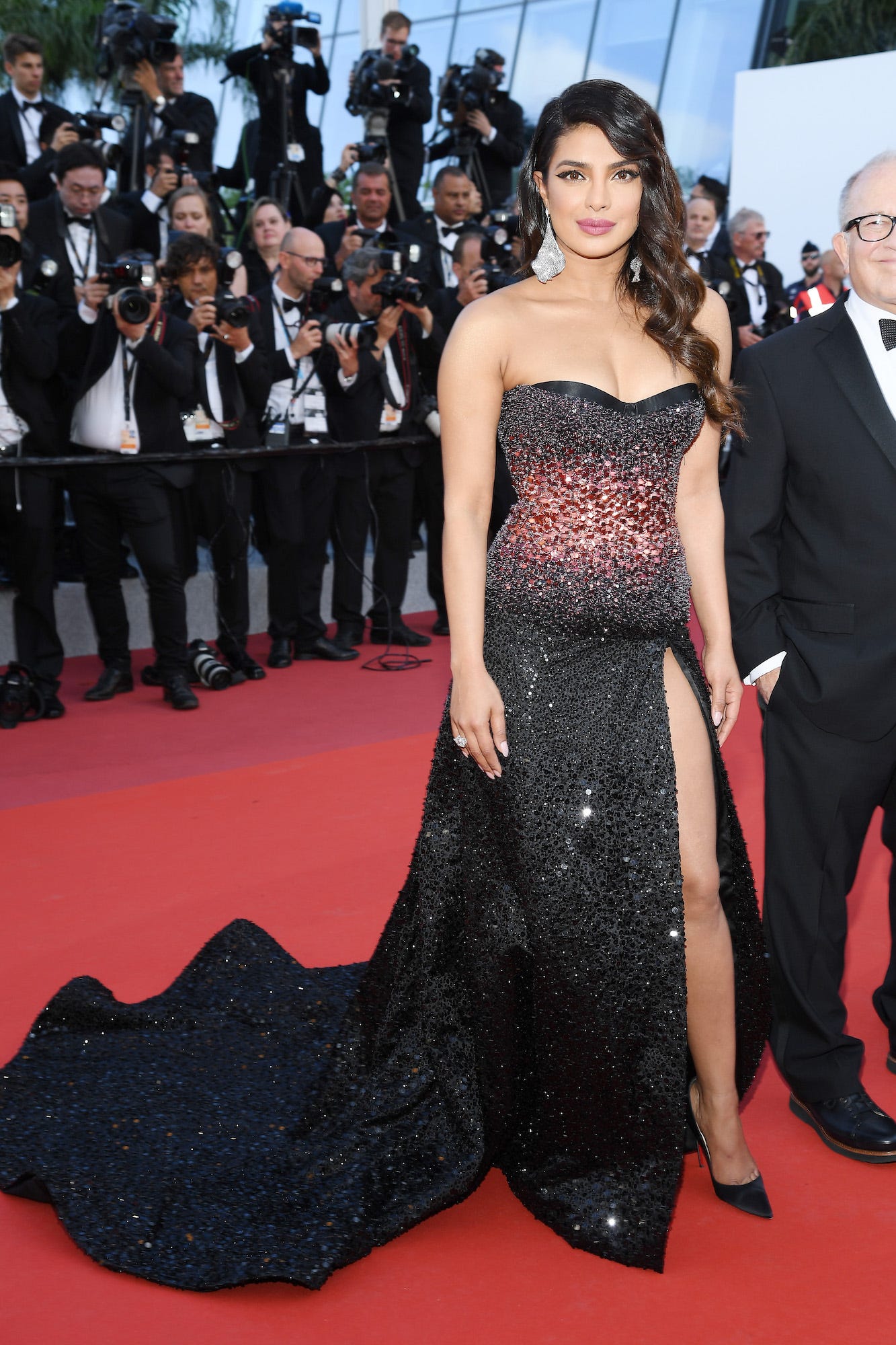 Her strapless black gown was designed by Roberto Cavalli, and featured a daring thigh-high slit. It was also embellished with red-and-black sparkles from top to bottom.

Leomie Anderson sparkled in gold-flecked shorts at the “Once Upon A Time In Hollywood” screening. 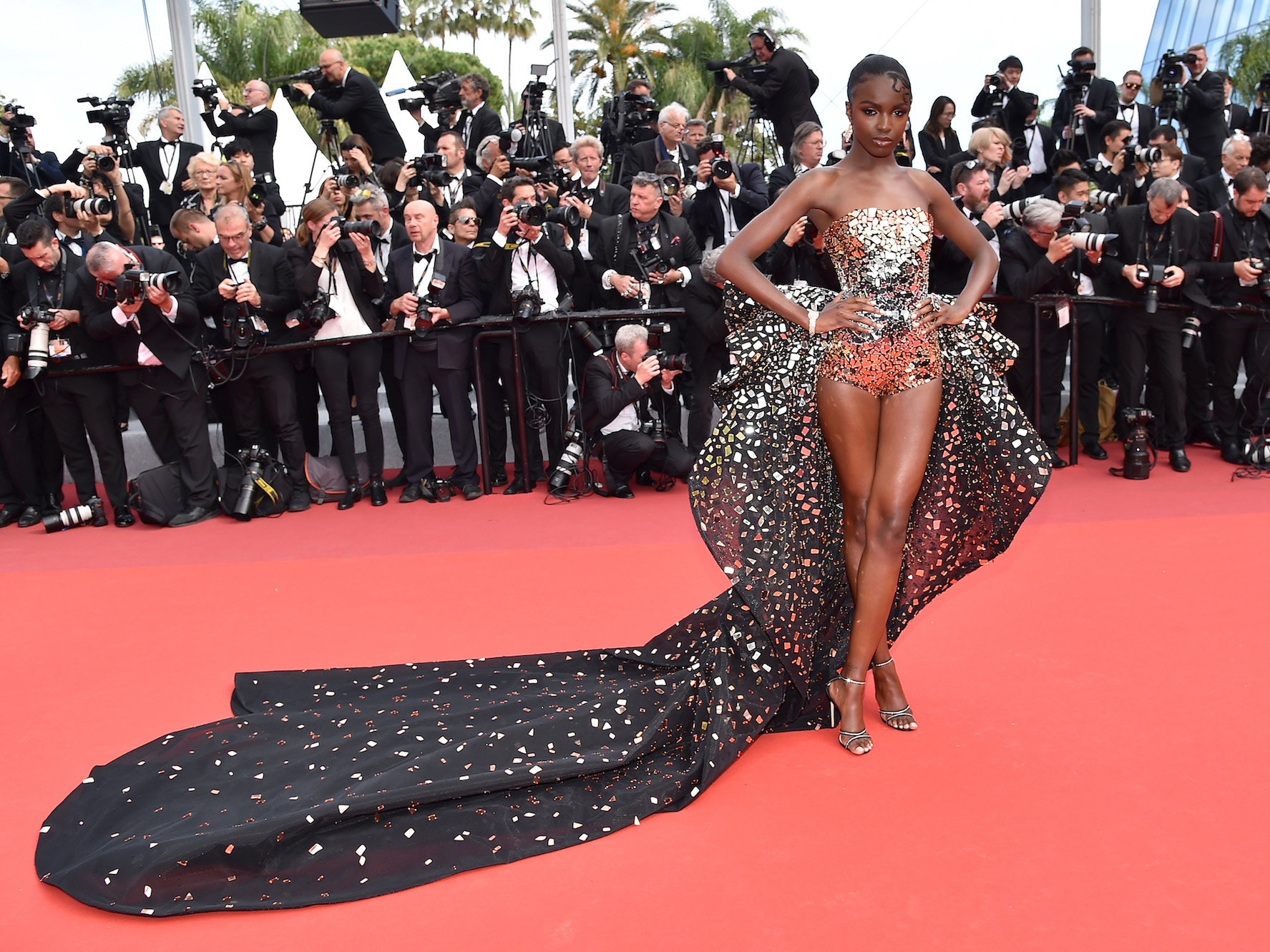 Extra fabric was added to the back of her shorts, creating a long train and ruffles at her waist. Speaking to The Guardian, Anderson revealed that she helped create her outfit with designer Rami Kadi.