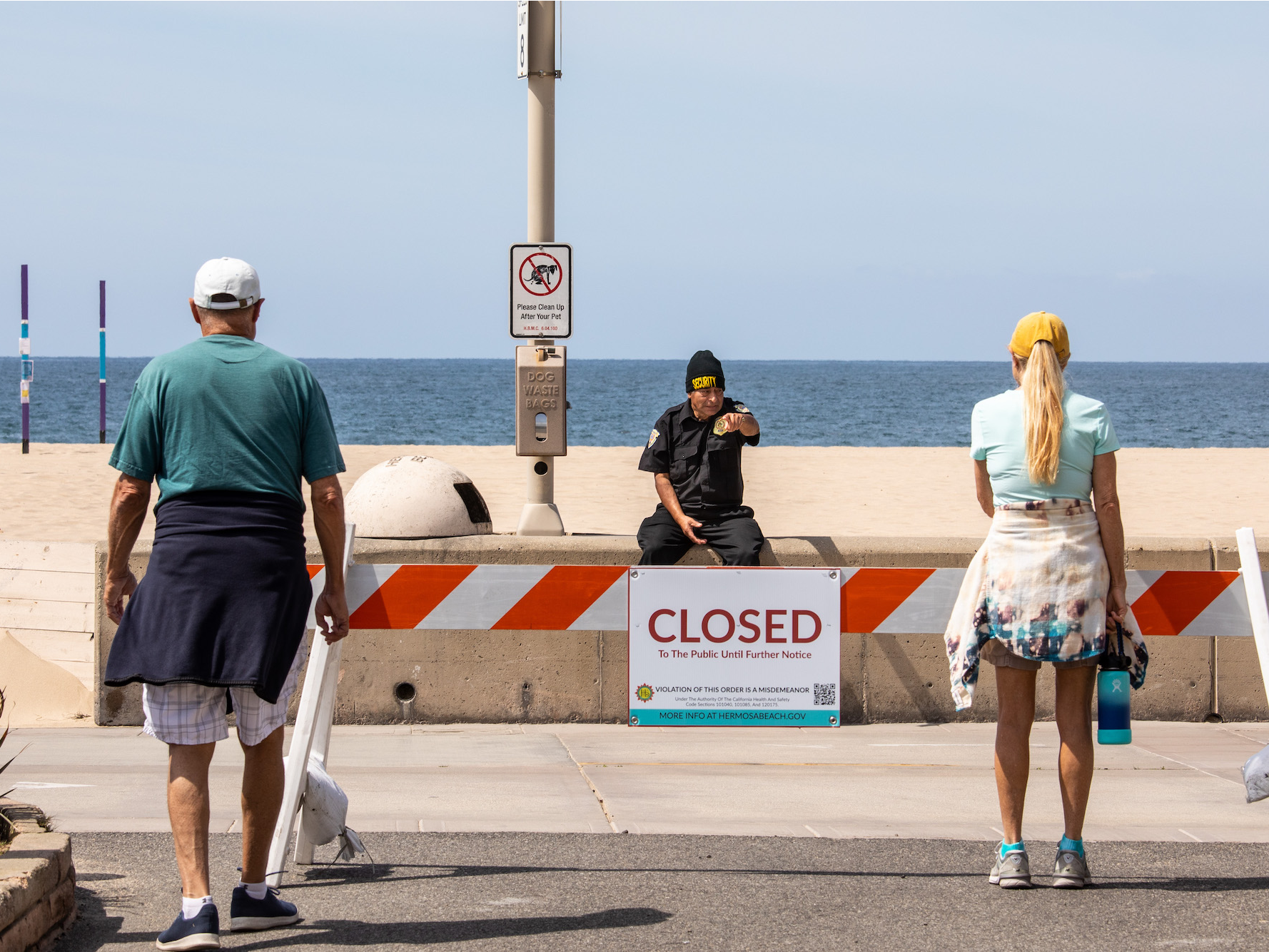 Jay L. Clendenin / Los Angeles Times via Getty ImagesAn unidentified worker with Absolute Intl. Security, providing security for the Hermosa Beach Police Department in closing off The Strand and two-mile stretch of Hermosa Beach, CA, lets people know of the closures, in an effort to prevent crowds and gatherings of people in the south bay town and slow the spread of the coronavirus, March 28, 2020.

When the San Francisco Bay Area and the state of California announced stay-at-home orders on March 17 and March 19, respectively, to contain the coronavirus disease, officials said that law enforcement would rely on voluntary compliance from residents instead of issuing citations.

But last Friday, San Francisco announced that it would begin ticketing people in violation of the order.

And now officials across the state are cracking down on issuing citations to people violating the order, which requires residents to remain indoors as much as possible, limit unnecessary trips outside, and only leave their homes for essential needs, like to go grocery shopping.

“I think the days of trying to get voluntary compliance are really over,” San Diego County Sheriff Bill Gore said in a Thursday news conference, according to the Los Angeles Times.

In San Francisco, a ticket was given to an 86-year-old anti-abortion advocate intent on maintaining his booth outside of a Planned Parenthood clinic last Thursday. He had been warned by law enforcement the previous day, but the resident, Ron Konopaski, argued that his services qualified as essential as reported by CBS San Francisco. He said he won’t return to the clinic, but he does intend on fighting the ticket that he was given.

“I think it’s a gross overreaction, and I don’t see any justification for it,” Konopaski told NBC Bay Area. “Honestly, I think it’s trampling our rights.”

In Santa Cruz, about 40 citations were given to people around beach areas who were not practicing social, or physical, distancing, NBC Bay Area reported.

Further south, in the beach town of Encinitas in San Diego County, citations were issued to 22 people on Friday, the San Diego County Sheriff’s Department tweeted on Saturday. They “were watching the sunset, having picnics near the beach,” as Fox5San Diego reported.

According to the county, fines can reach up to $US1,000 or six months in jail.

Officials are advising people to call authorities – using a nonemergency number – if they witness others violating the stay-at-home directives. The San Diego County Sheriff’s Department has since said that the citations given to the beachgoers were a targeted effort after multiple calls notified police of people violating guidelines, according to a CBS San Diego report.

One of the residents ticketed reached out to CBS San Diego saying that the order’s restrictions were not made clear to her, and that she and her husband do not have social media or “traditional TV” to keep up with information.

In Manhattan Beach in Los Angeles County, a surfer was fined $US1,ooo two weekends ago after being accused of defying police and lifeguards, who told him not to go into the water. And a Malibu paddleboarder was arrested Thursday after authorities said he defied multiple police orders to come to shore over the course of at least 30 minutes, as the Los Angeles Times reported.

Businesses have been fined as well, remaining open and arguing that their establishment is considered essential. Two smoke shops and a shoe store in Los Angeles and a San Francisco business are among the ones being charged with violating the order by staying open.

California is gearing up for an expected surge in coronavirus cases as the confirmed case count hits 15,824 in the state, with 372 reported deaths. Though the case count keeps rising, some health experts are saying that the early social distancing measures taken by the state of California and the San Francisco Bay Area may be working in flattening the curve, or stunting the spread of the virus so the healthcare system can efficiently treat infected patients.

However, those same experts, as well as officials across the state, are still stressing the importance of heeding the stay-at-home order to continue fighting the coronavirus disease.