A game between the Los Angeles Dodgers and the San Diego Padres at Dodger Stadium was in the bottom of the fourth inning when the earthquake hit:

Roughly 270 miles away, an NBA Summer League game between the Orlando Magic and San Antonio Spurs at the Cox Pavilion in Nevada was canceled for precautionary measures:

.@OrlandoMagic and Spurs play through the effects of the 7.1 magnitude earthquake that just struck central California. The other Summer League game in Las Vegas is suspended. pic.twitter.com/aLWbOkORfd

The New York Knicks-New Orleans Pelicans game at the nearby Thomas and Mack Center in Nevada was also canceled in the fourth quarter:

What it looked like the moment an earthquake hit during the game.

A live newscast on KCAL-TV was abruptly put on hold after the earthquake:

The Los Angeles Fire Department conducted an aerial and ground “systematic survey” of the city and reported that “no major infrastructure damage was noted” after the earthquake at around 8:19 p.m. local time.

“There has been no loss of life or serious injury that we can directly attribute to the widely felt … earthquake,” the LAFD said in a statement.

The earthquake occurred one day after the 6.4 magnitude earthquake on the Fourth of July. Both quakes originated around 11 miles northeast of Ridgecrest, California. The latest earthquake is the largest temblor in over 20 years. 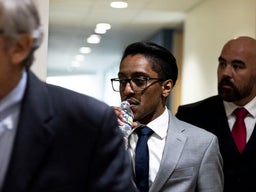