Leftover building materials were used to create a 2-story, 20-foot long tiny home on wheels for $84,746 — see inside 'Bitser' 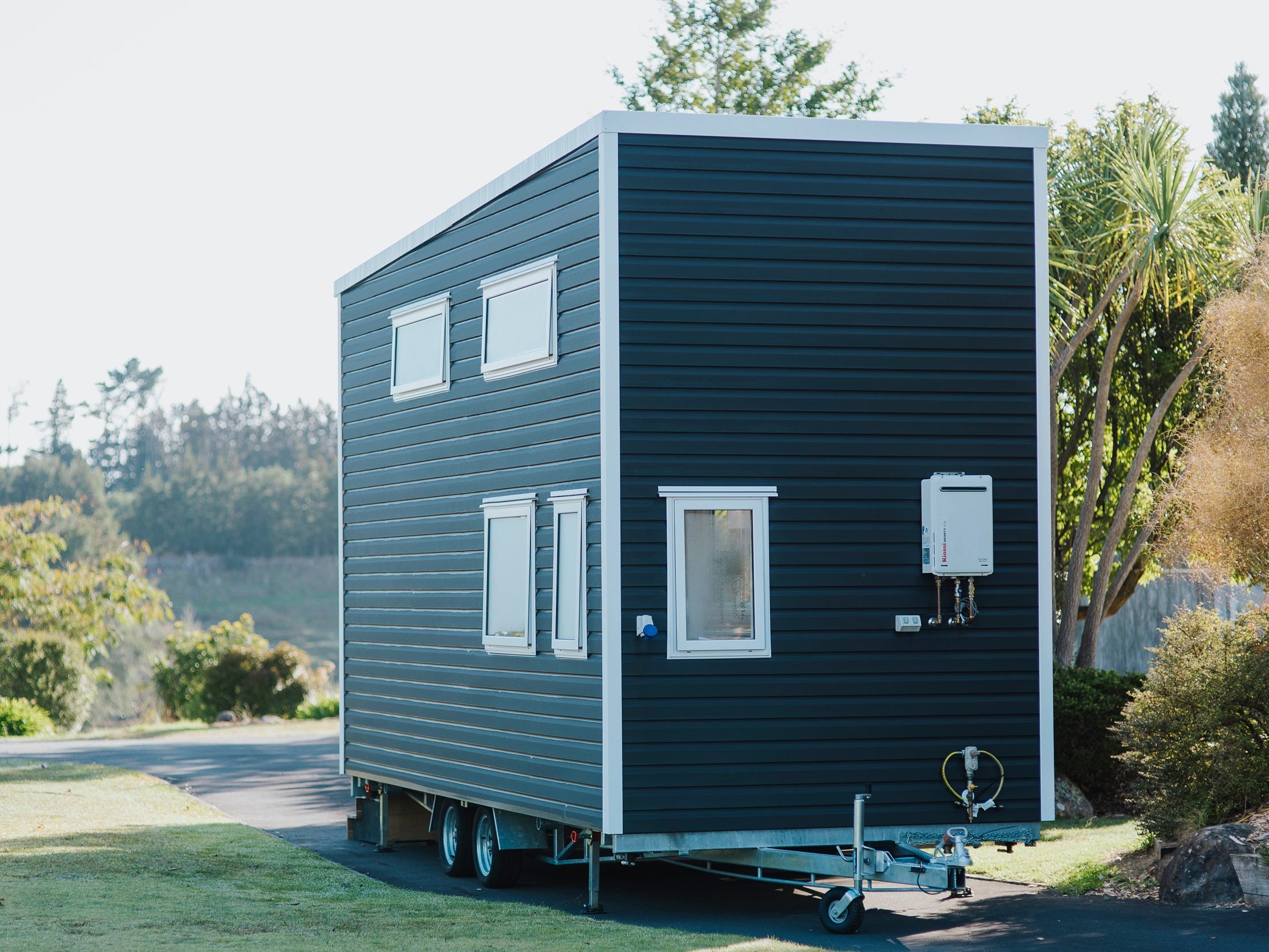 The home was created out of extra material that was unused by previous builds, such as leftover windows and kitchen cabinets. But besides producing the tiny home with recycled pieces in mind, Build Tiny also wanted the interior design to reflect an “airy look” filled with light.

Biter was purchased by Build Tiny’s designer who “fell in love” with the build during construction and decided to purchase the mobile home before the company could publicly list it, according to its maker. While this particular build has already been sold, Build Tiny can create custom replicas for customers interested in a similar tiny home on wheels.

The tiny Bitser is 7.9 feet by 19.7 feet, and sits at around 7,121 pounds, allowing it to be easily towed, according to Build Tiny’s YouTube video tour of the tiny home. But like any non-tiny, non-mobile home, the Bitser comes with a bedroom, living room, kitchen, dining area, and bathroom.

Keep scrolling to see inside Bitser, which was completed in March and cost around $US84,746 including appliances.

Bitser’s main entry doorway was placed at the back of the home to save wall space, according to Build Tiny. 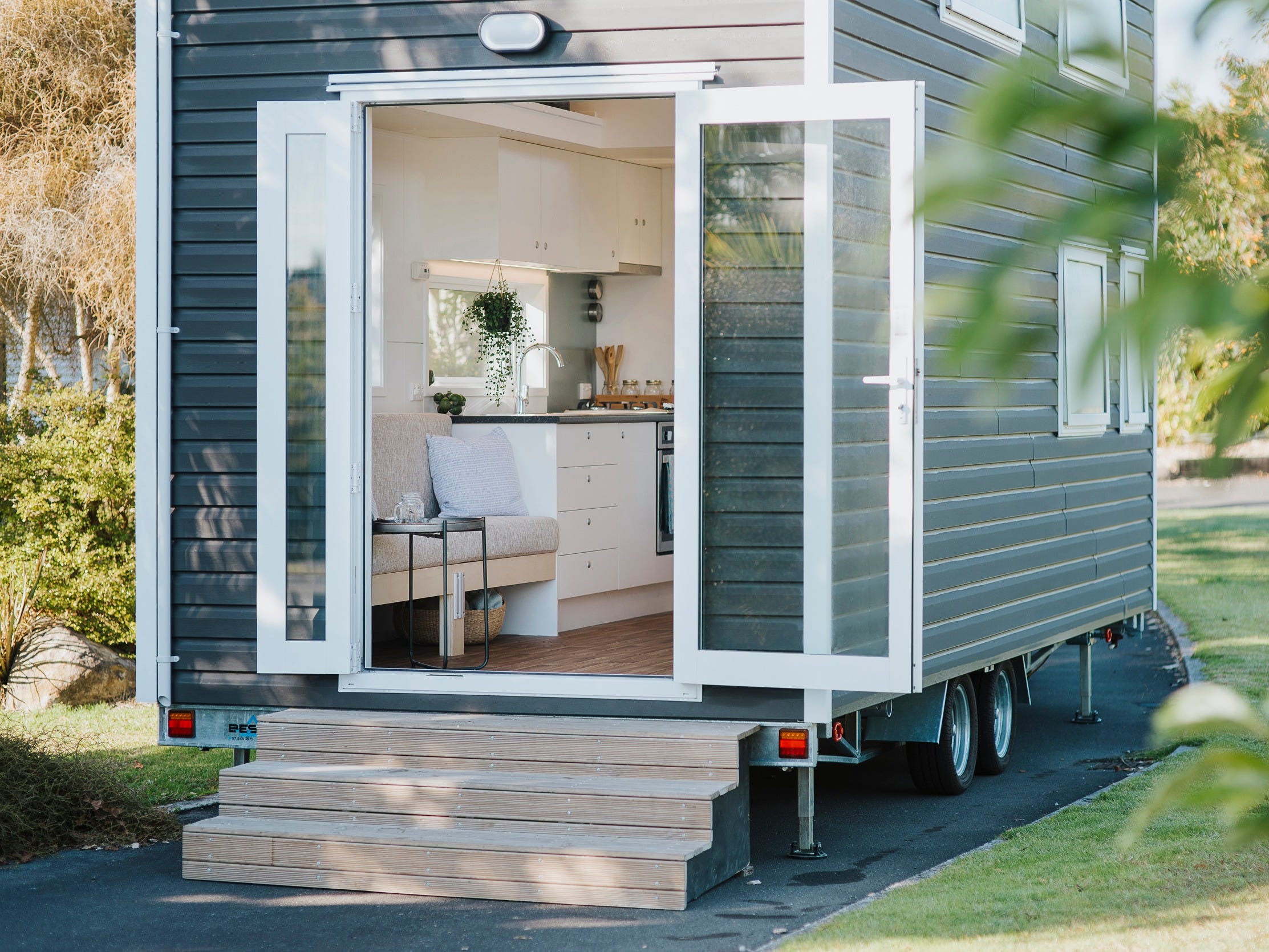 The kitchen comes with gas appliances, including the dual burner cooktop with a slide-out range hood. 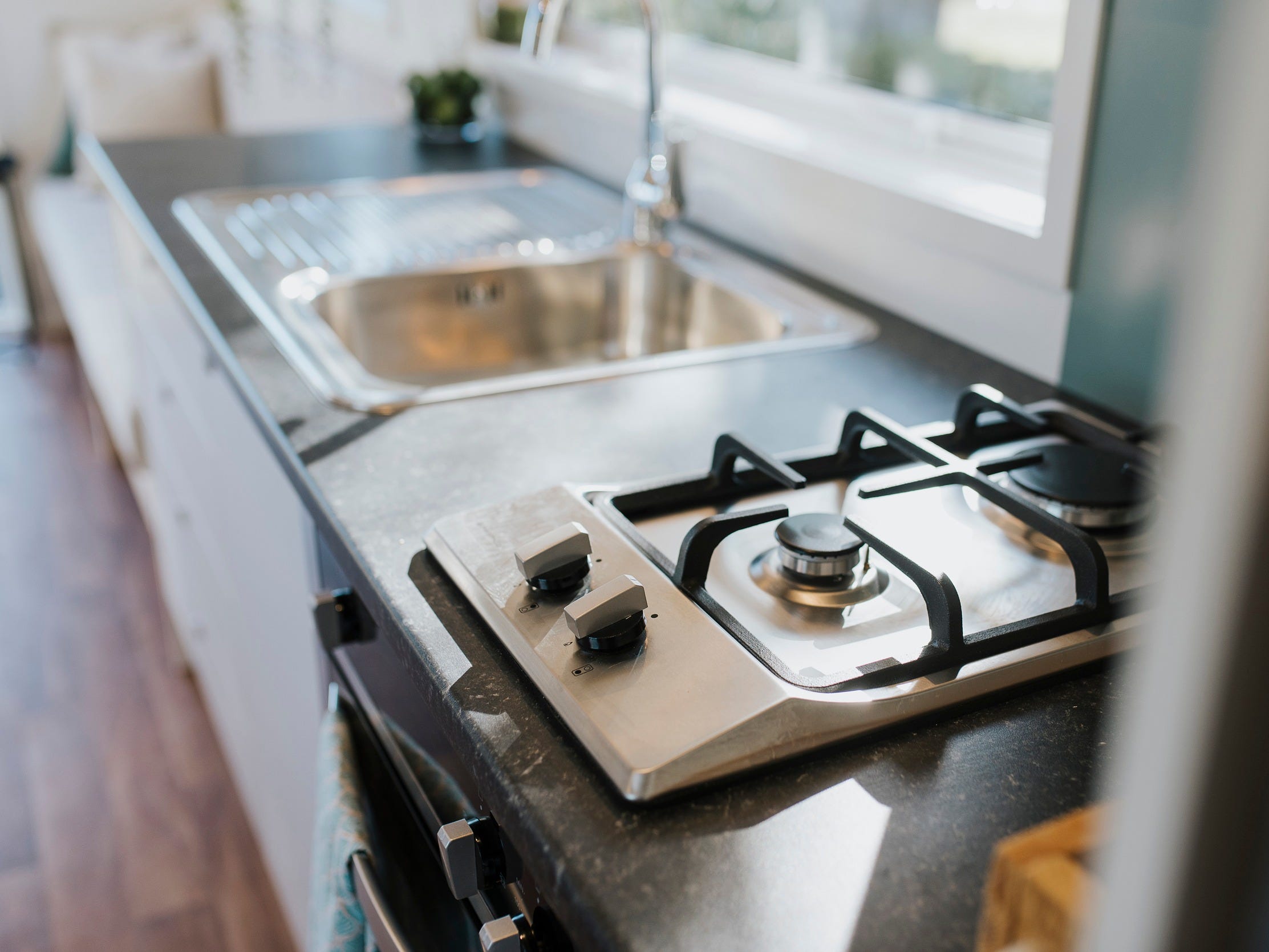 The kitchen is also equipped with a refrigerator, sink, oven … 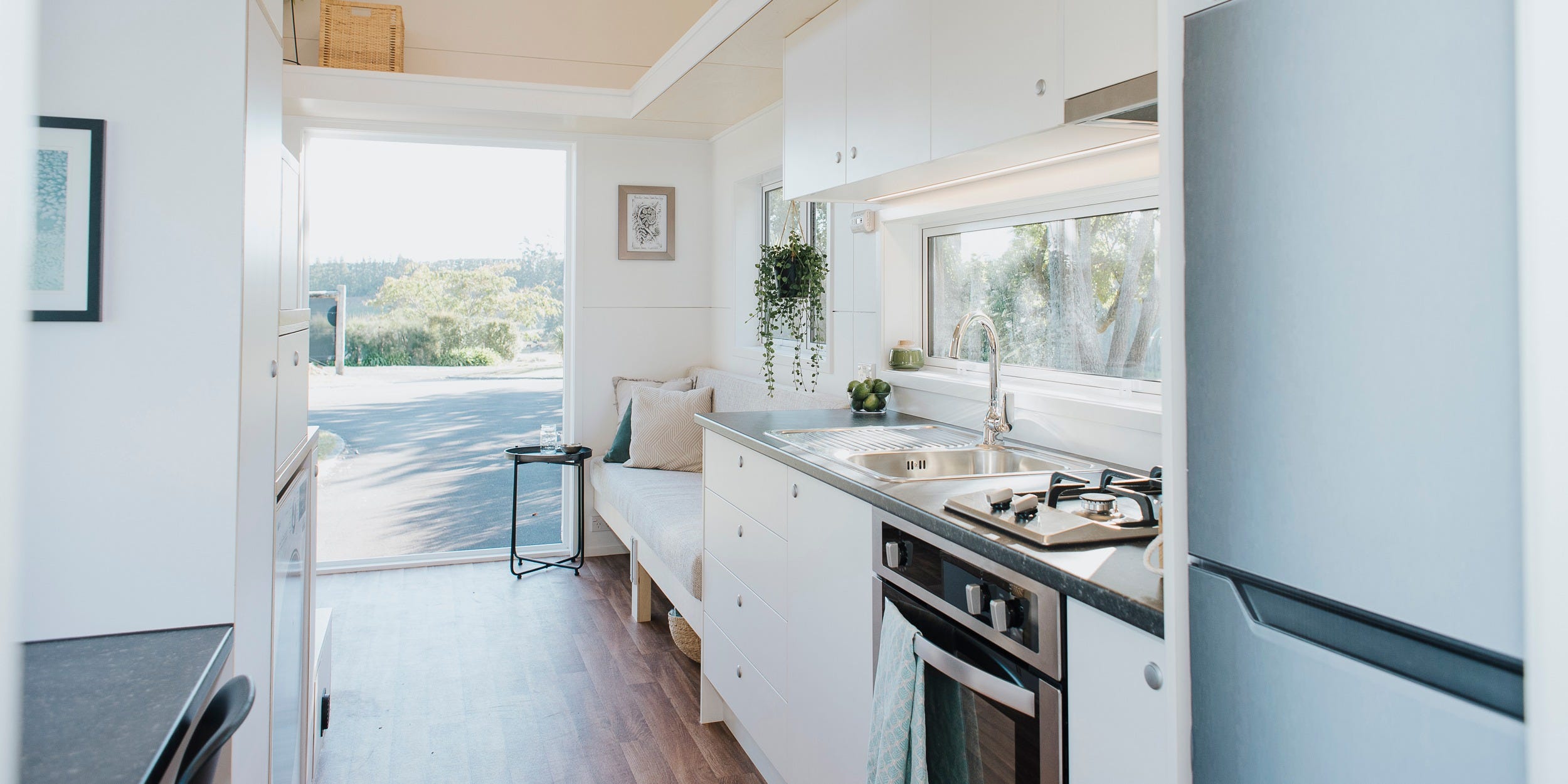 … long countertop, and plenty of push-lock storage units, just like any traditional kitchen. 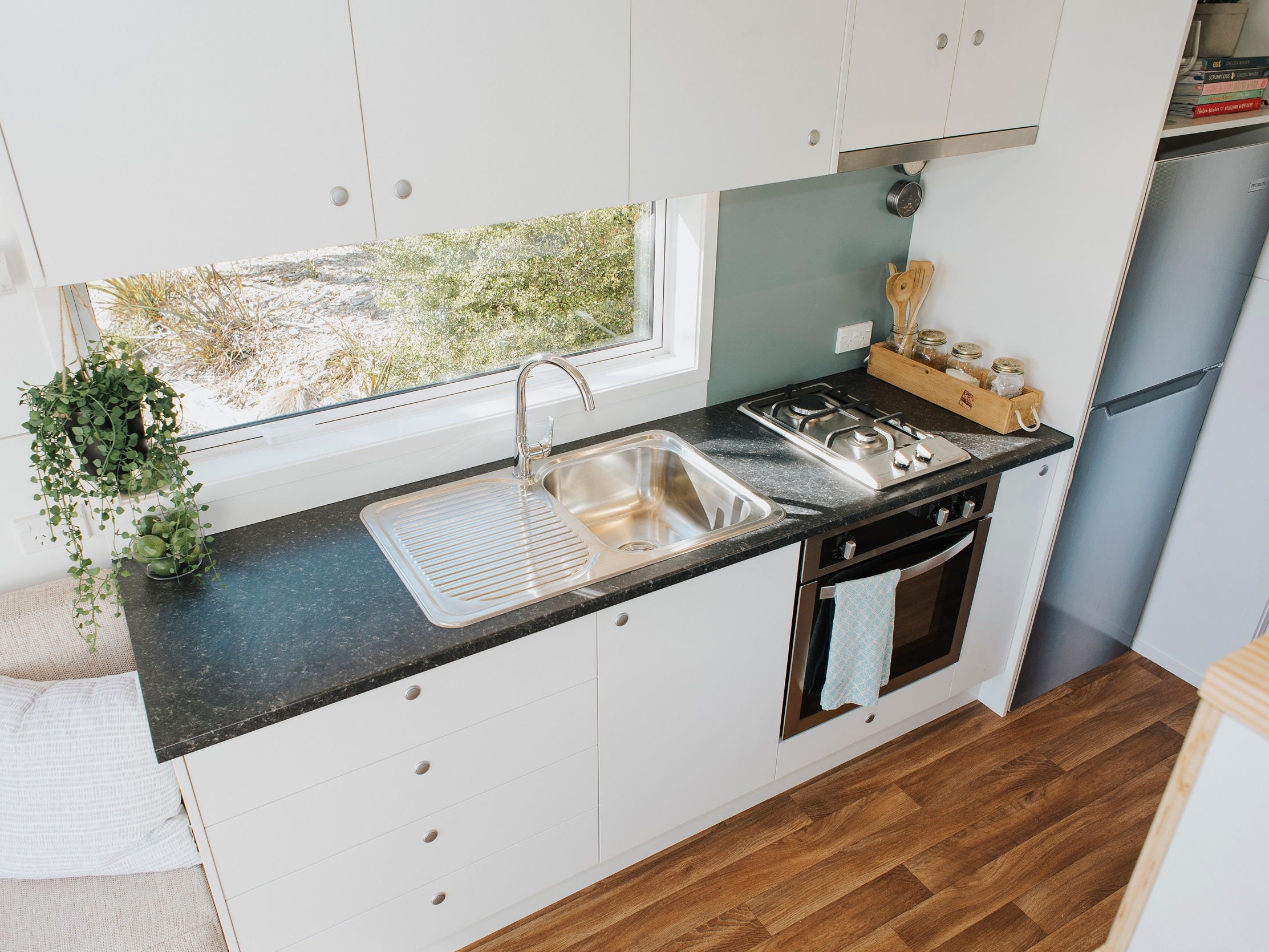 The bottom of the kitchen’s overhead cabinets have a built-in strip light that brightens the countertop and sink below. 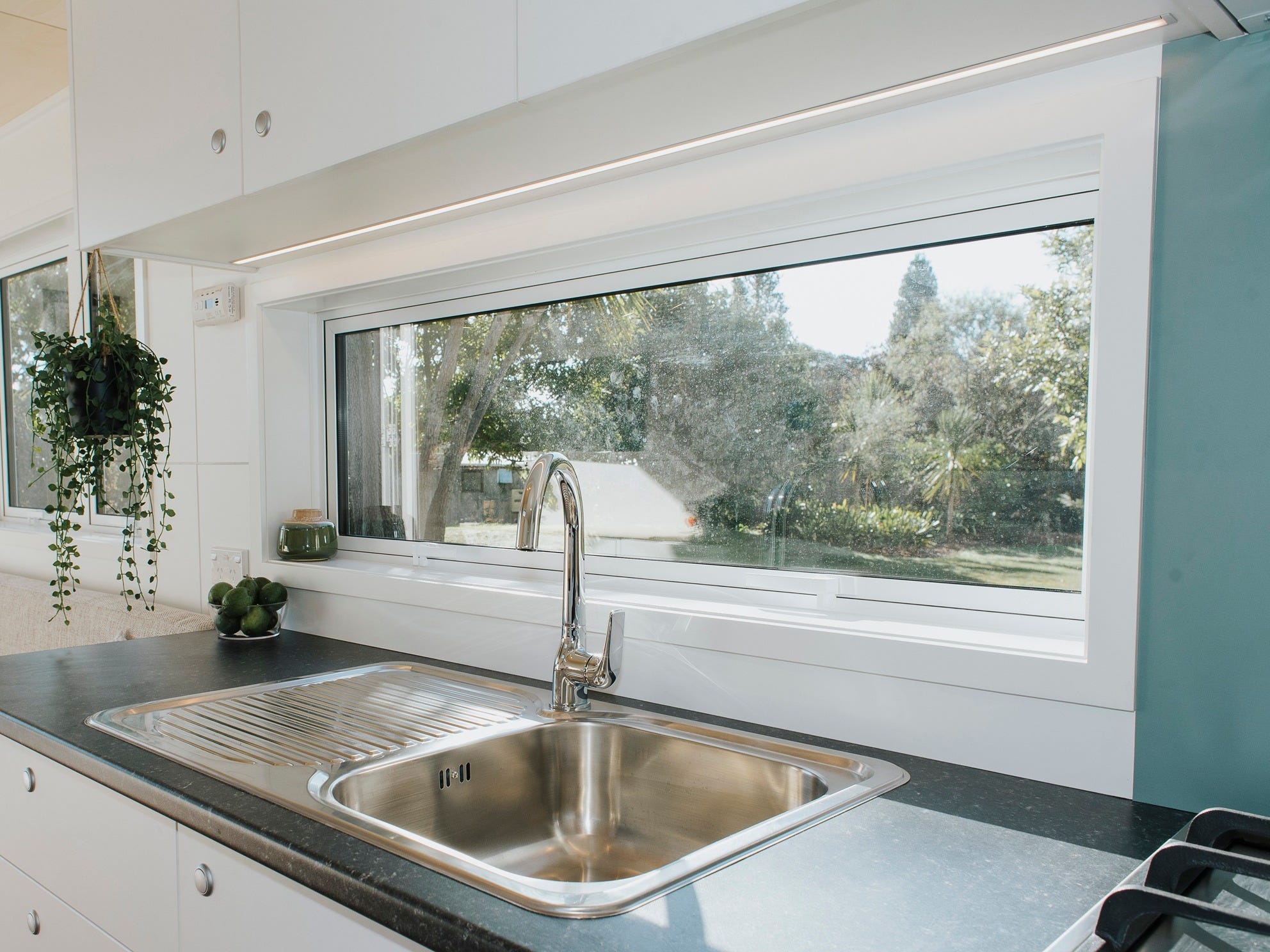 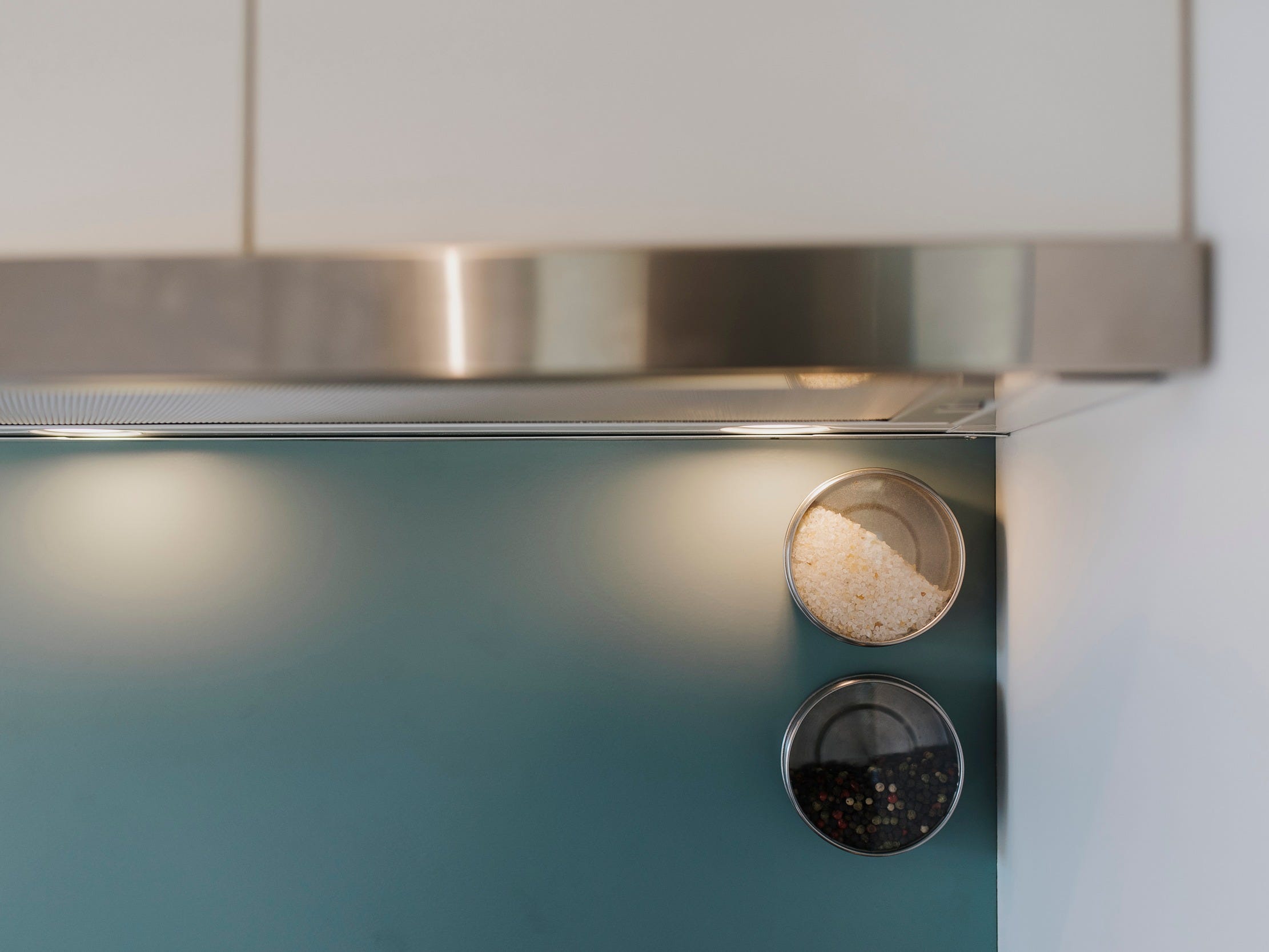 The door to the bathroom slides — instead of swings — out, saving space inside the tiny home. 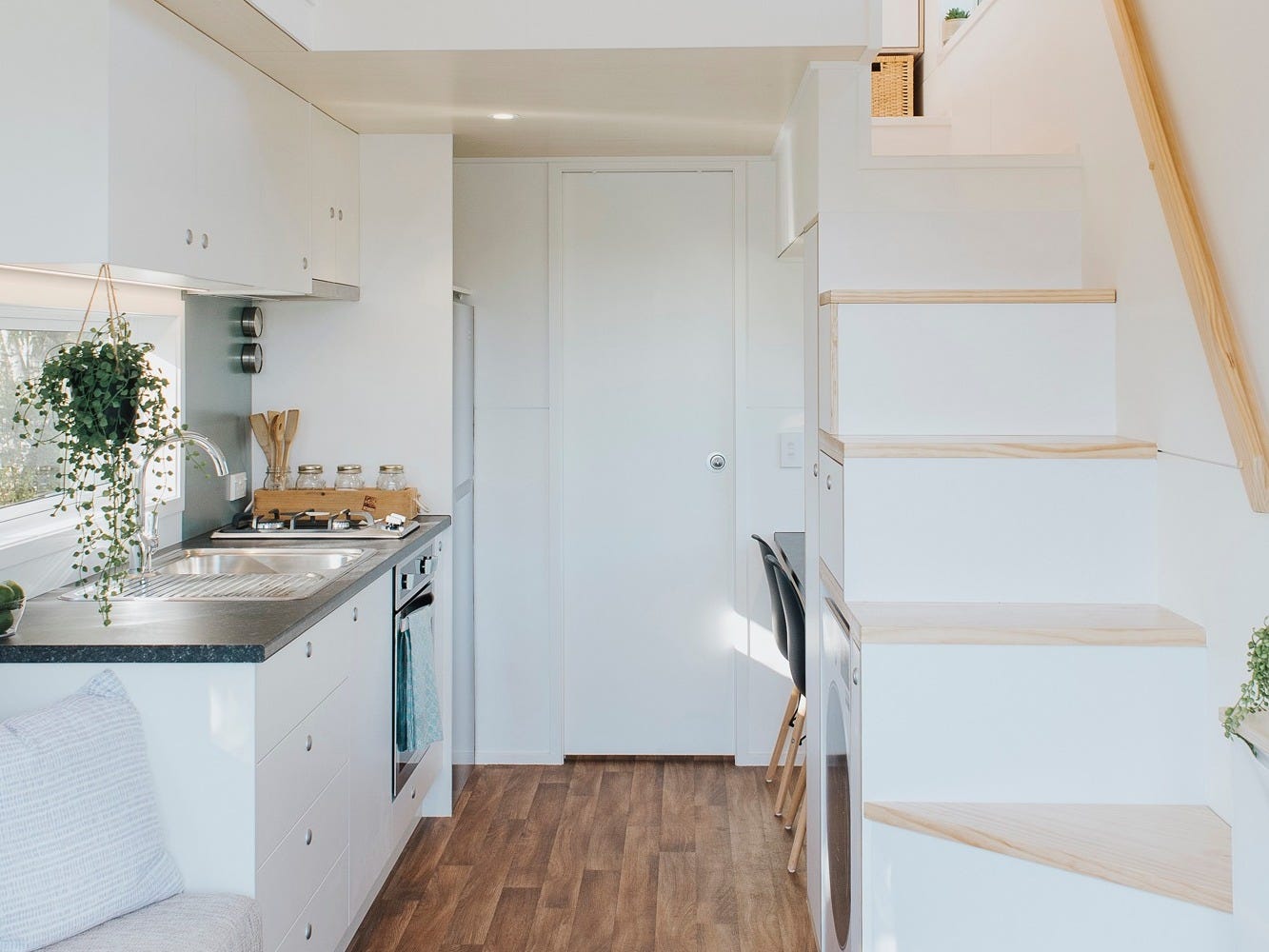 On the other side of the sliding door is a bamboo composting toilet, sink … 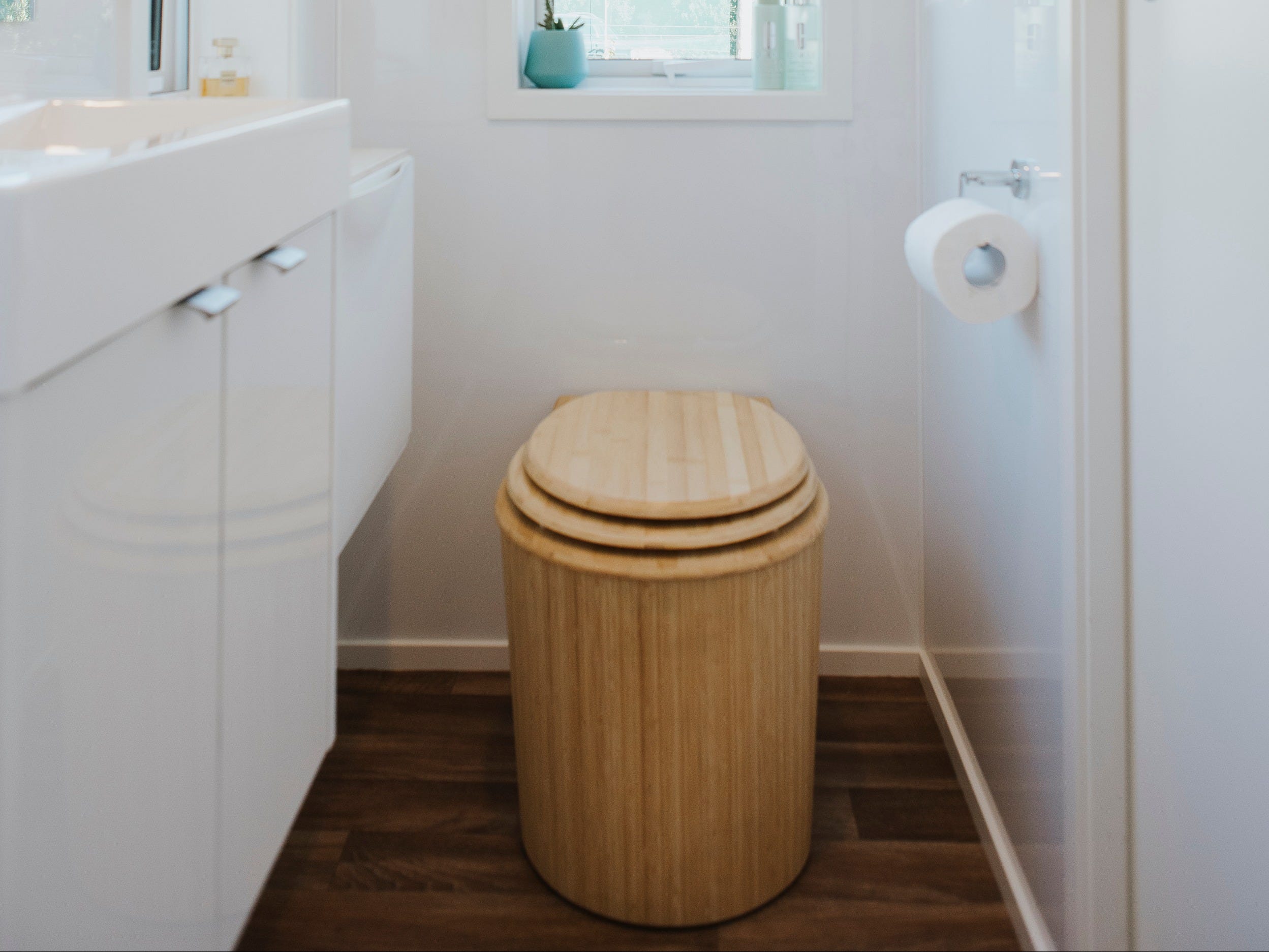 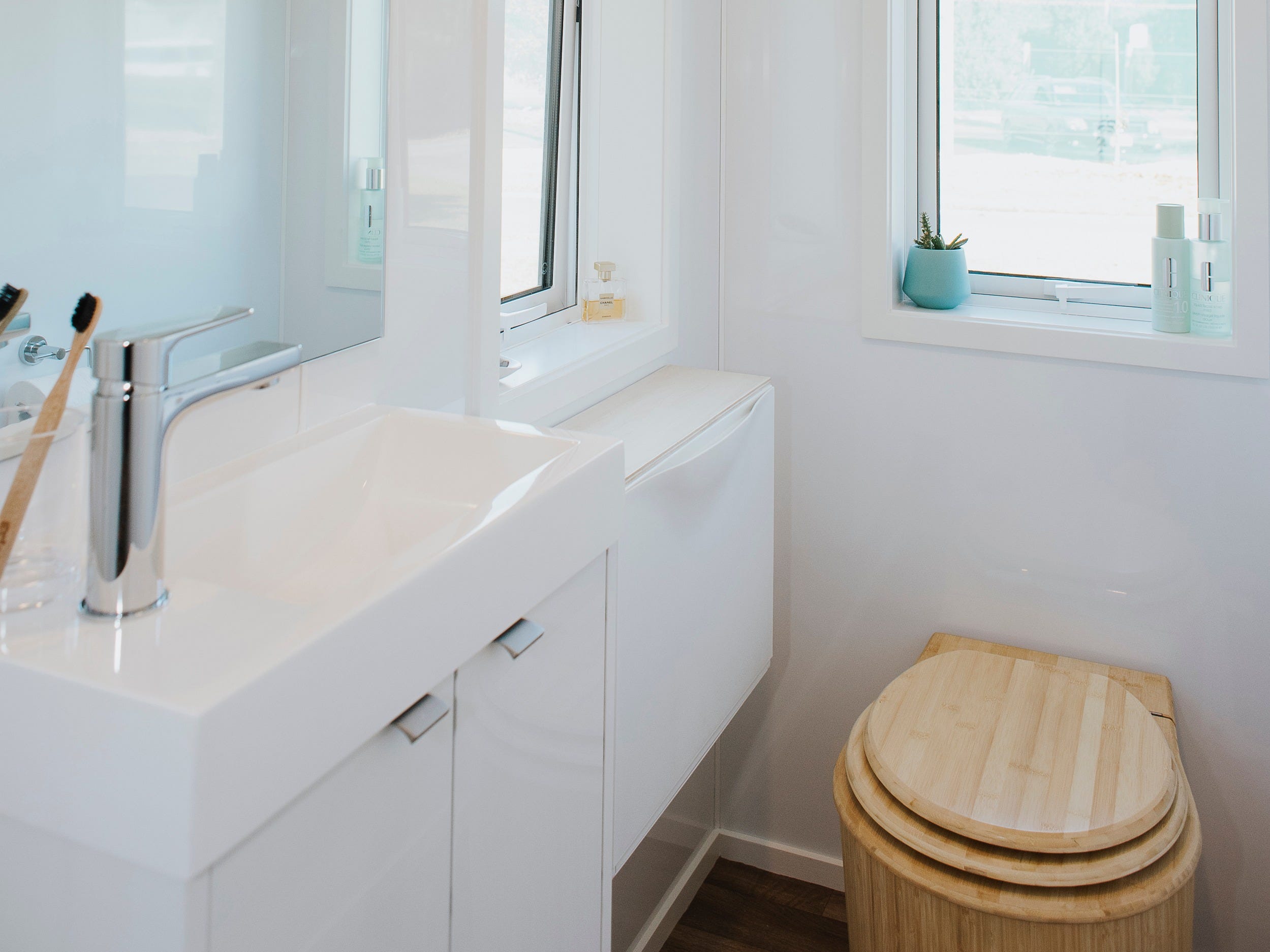 The shower comes with a shower dome that leaves the rest of the bathroom steam and mould-free, according to Showerdome. 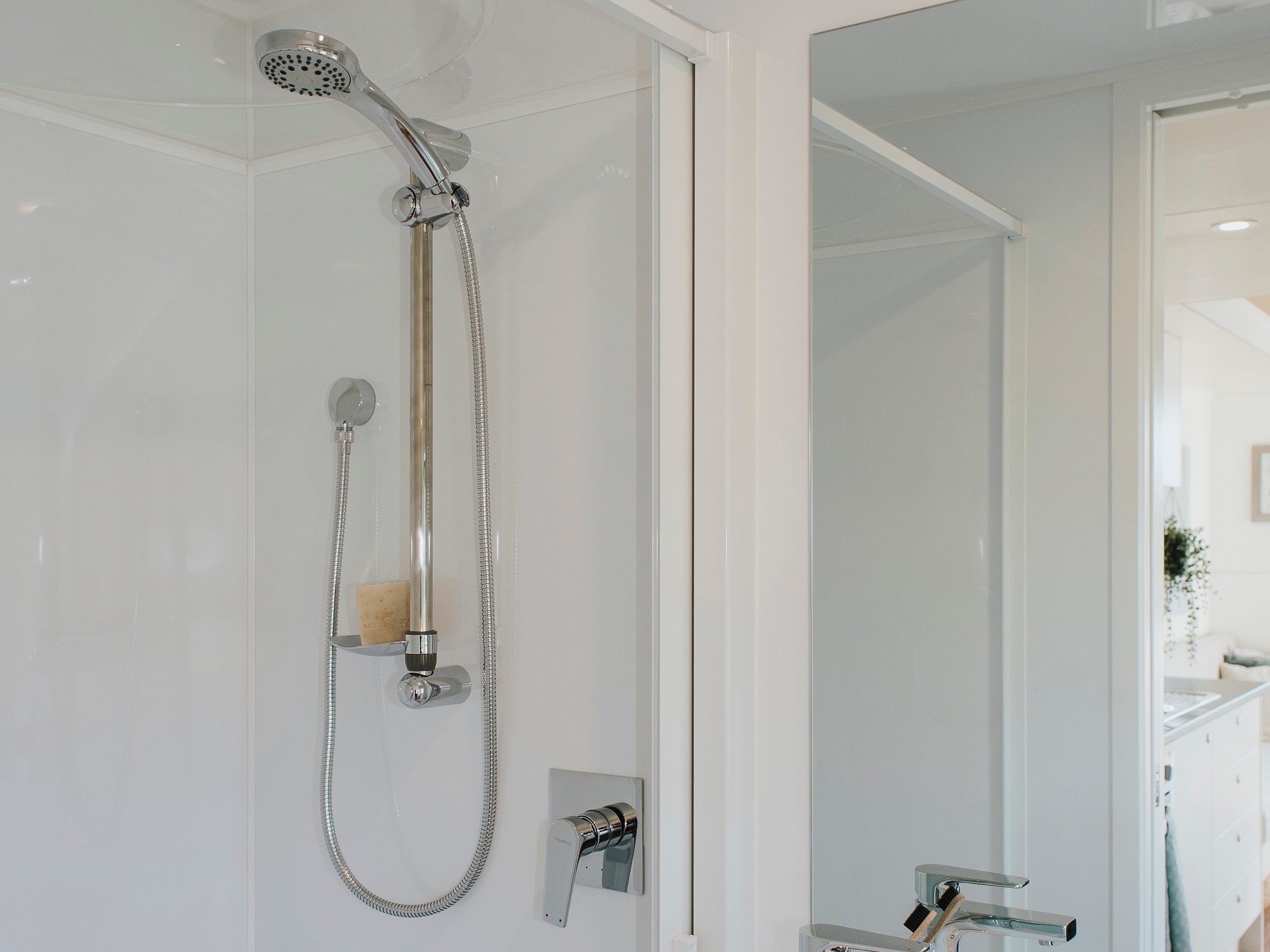 Bitser also comes with a built-in table near the kitchen and bathroom that can accommodate up to two people. 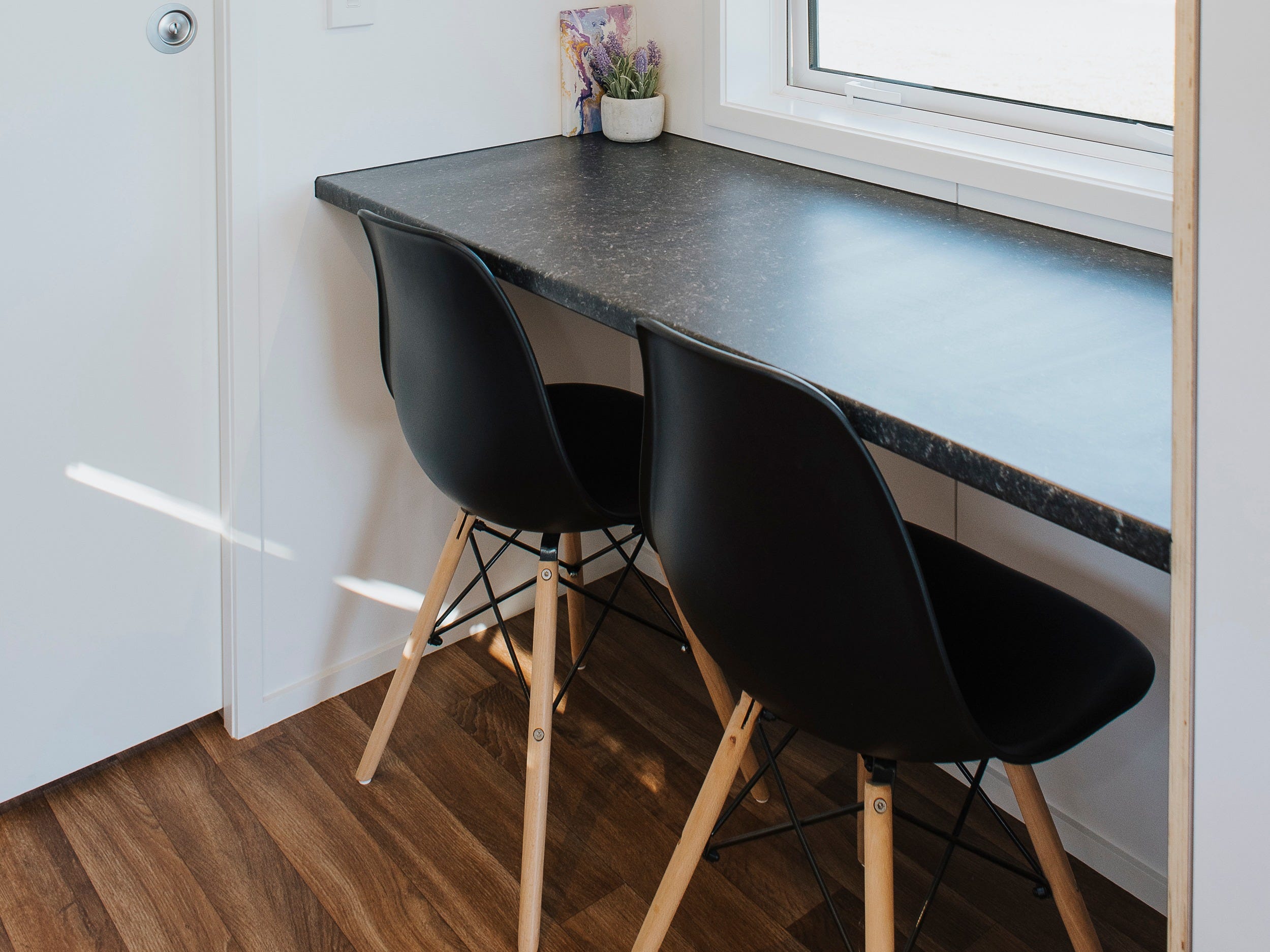 The living room — which sets next to the kitchen — includes a couch with a removable swivel dining table. 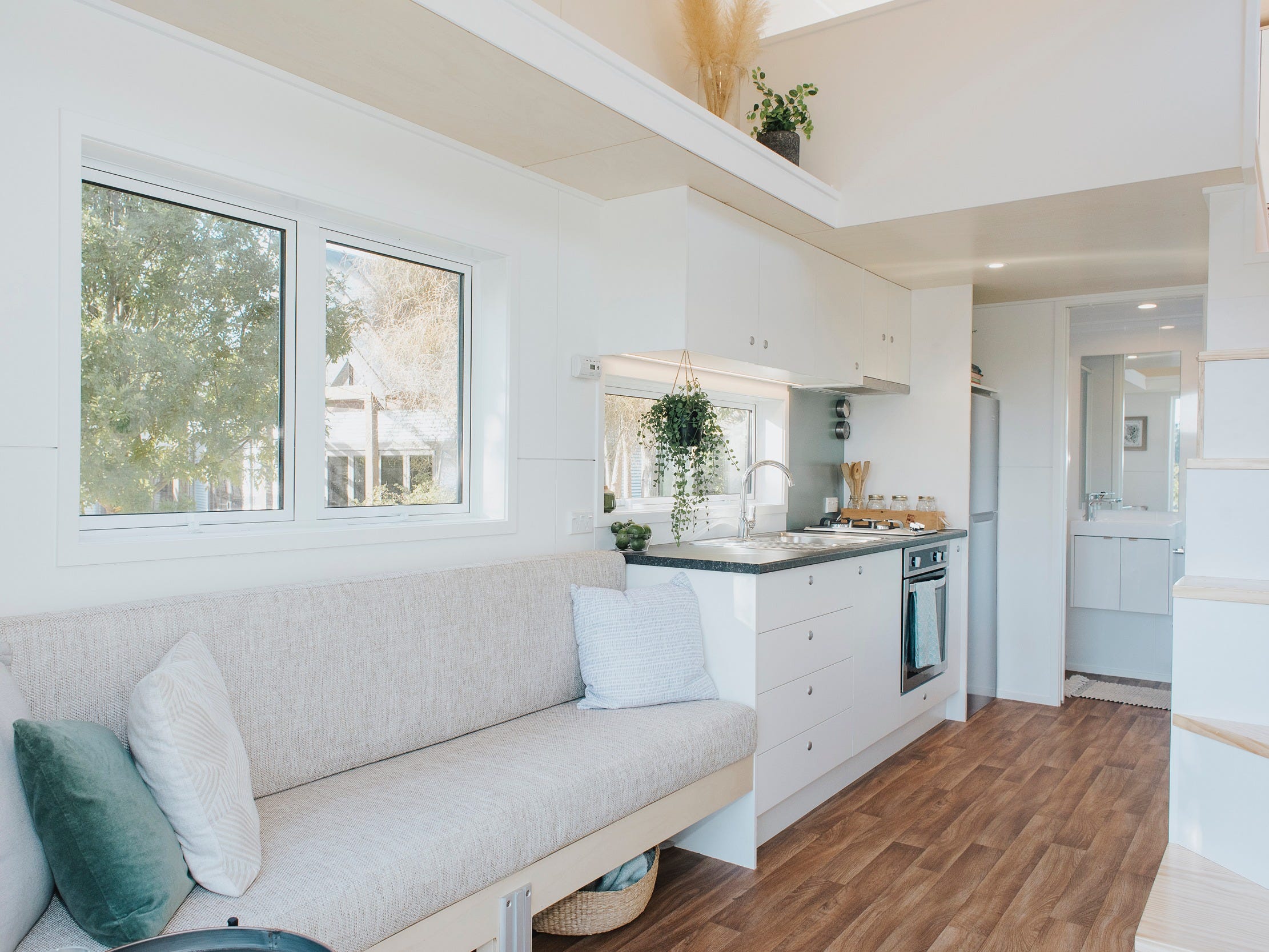 When the table isn’t in use, the tabletop and arm can be tucked away into one of the storage units integrated into the staircase. 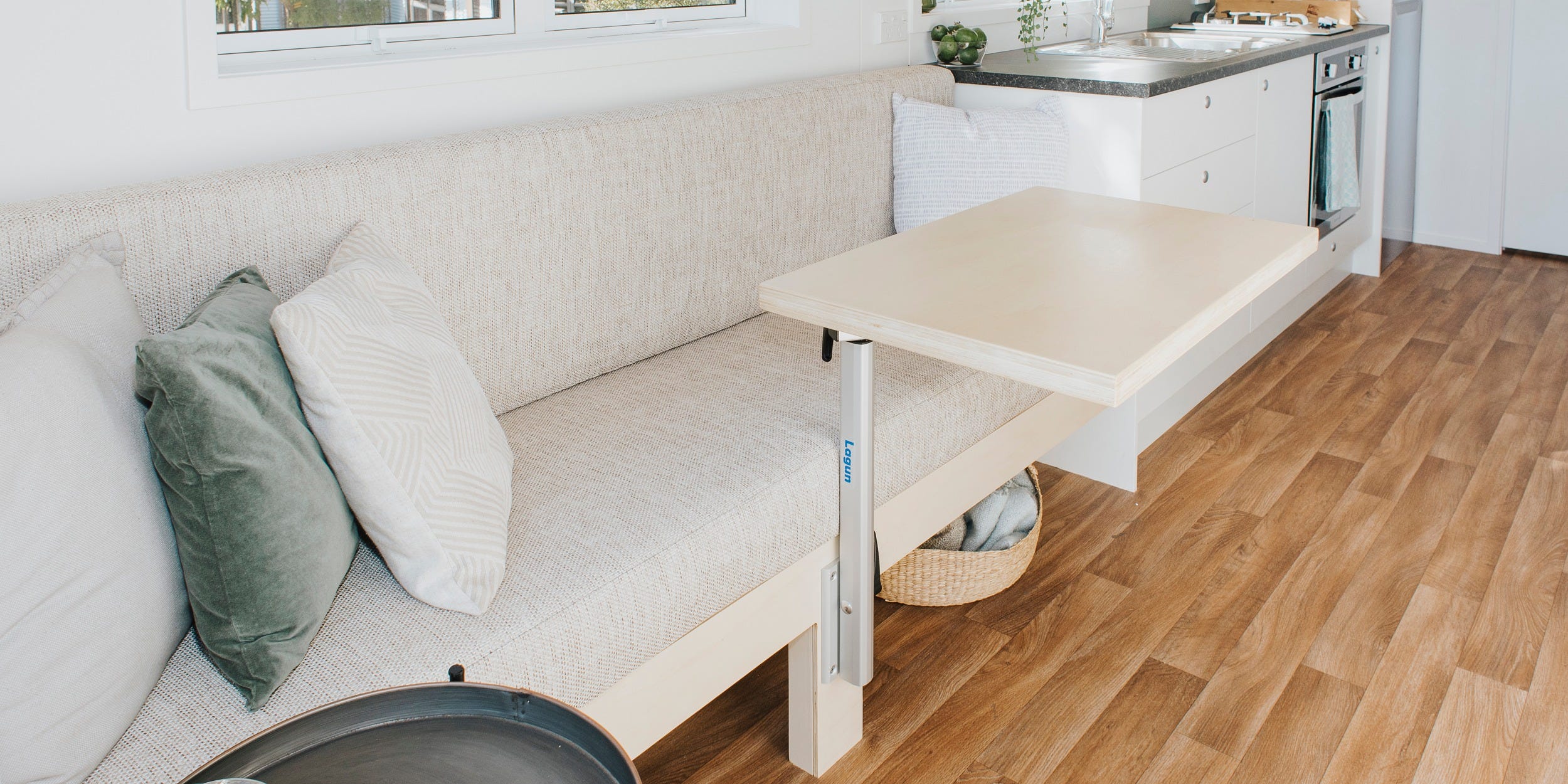 The couch is lifted to create under-couch storage space. 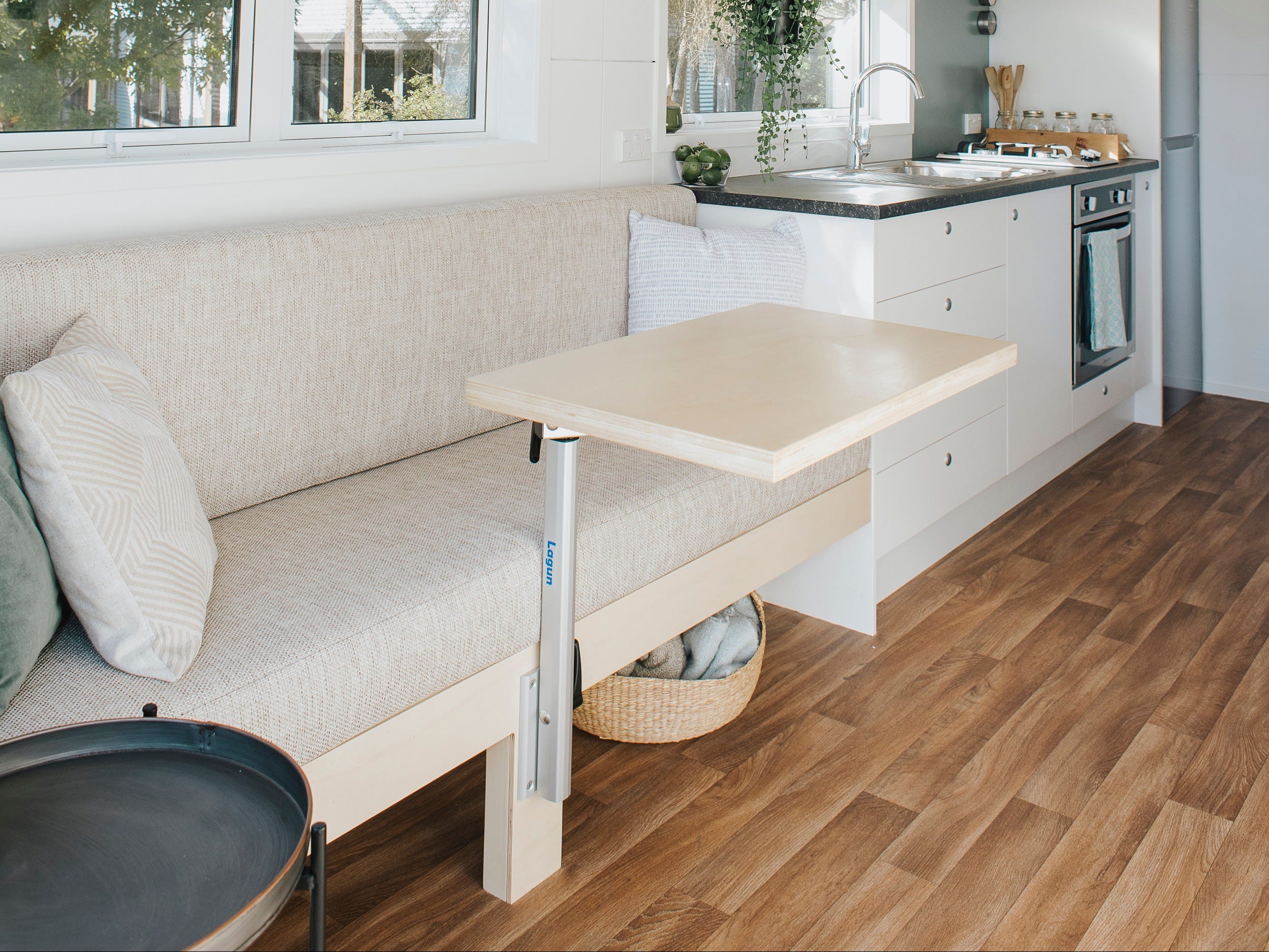 The television — which sits across from the lounge area — can swivel to face other parts of the tiny home. 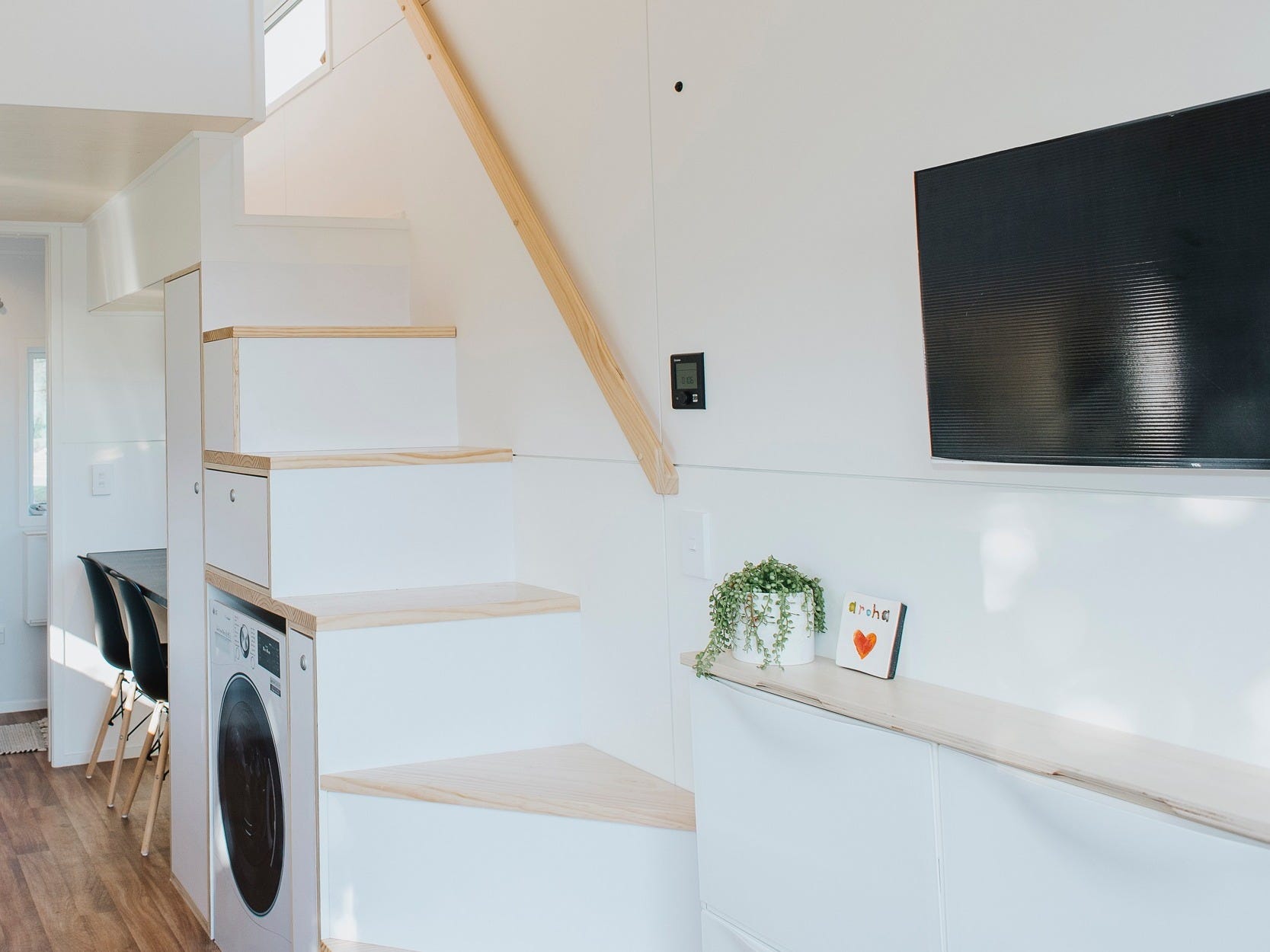 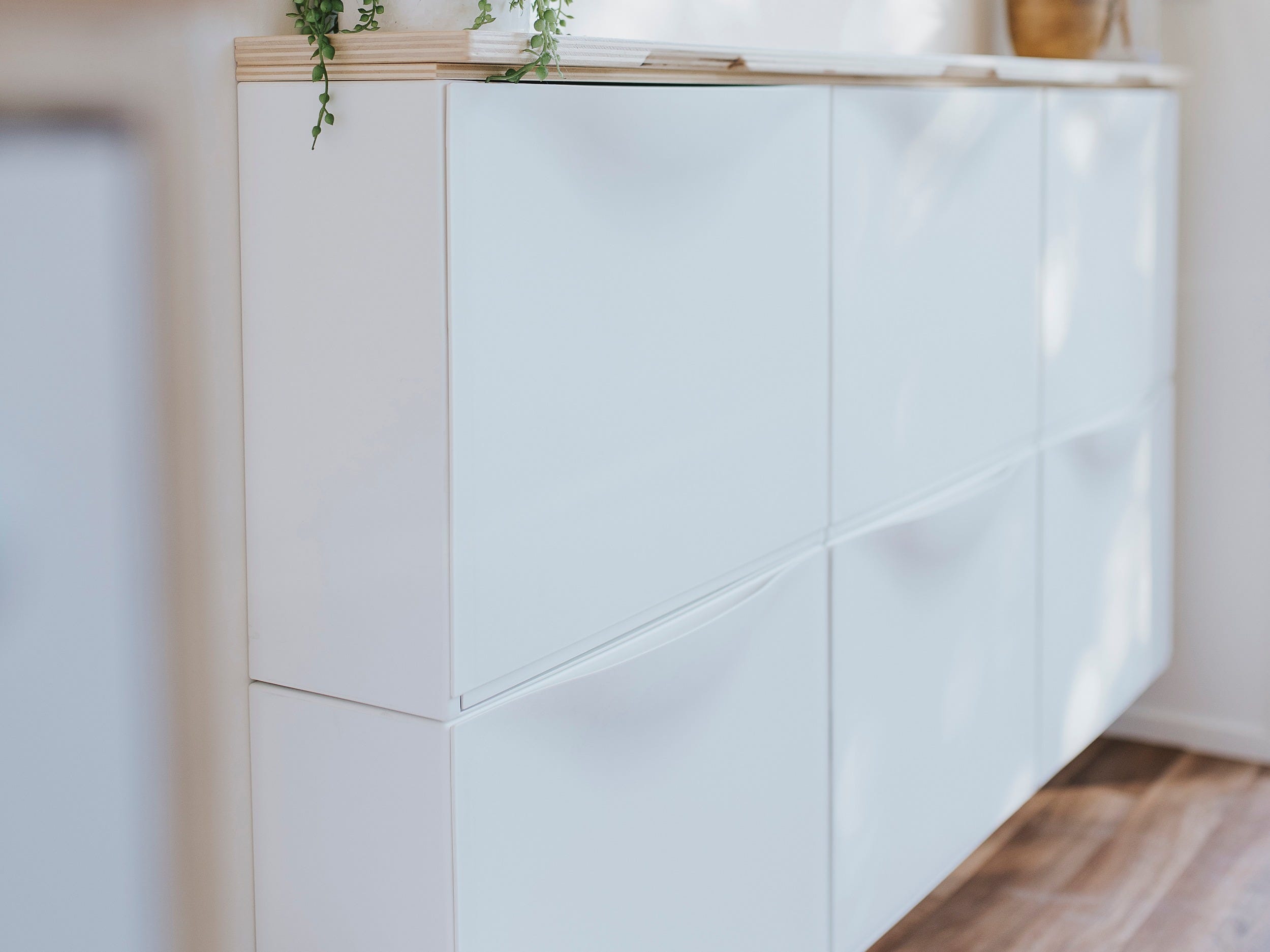 Further storage in the tiny home includes the pantry, which sits directly across from the kitchen … 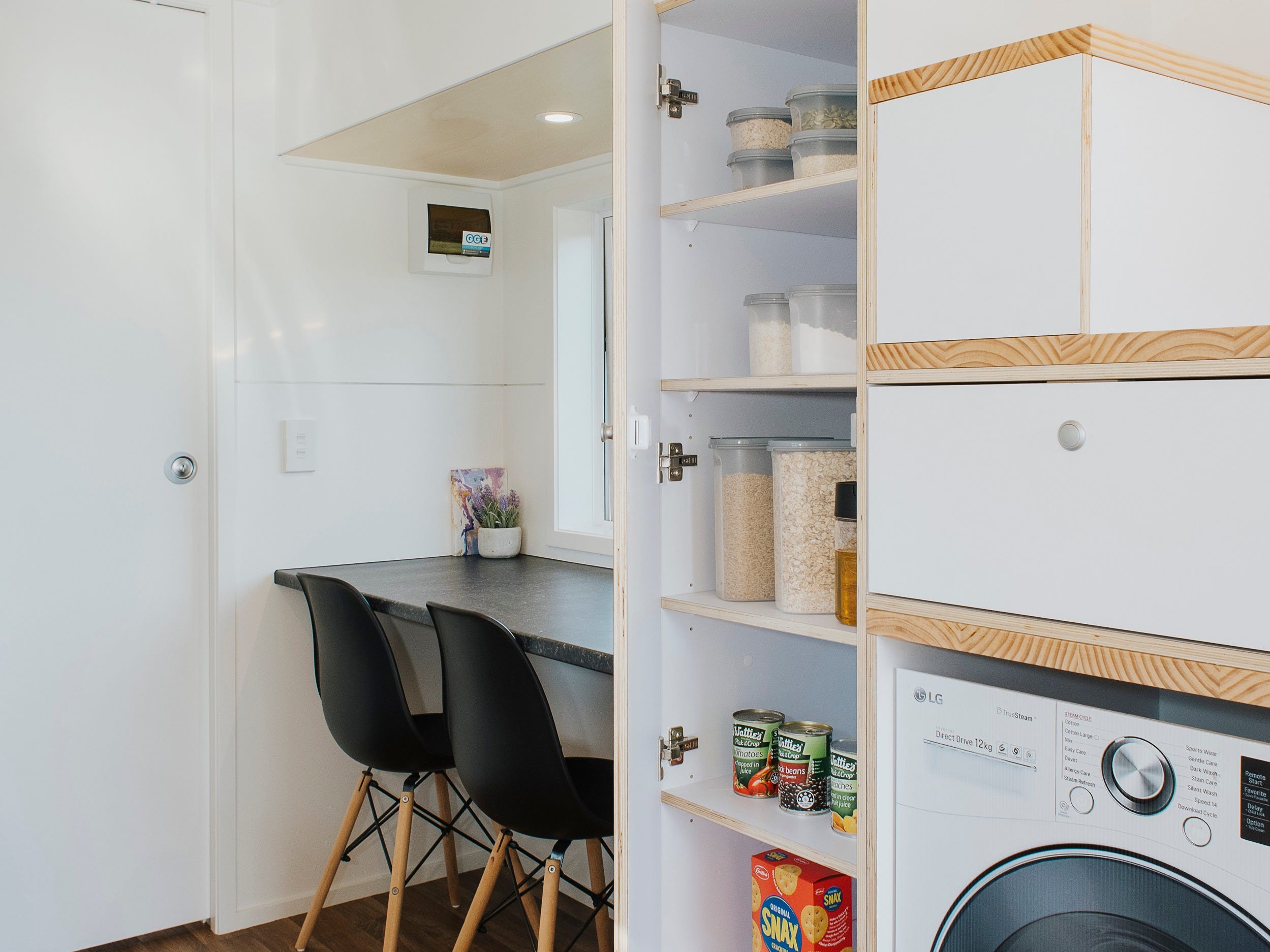 … and the aforementioned staircase-integrated storage units. 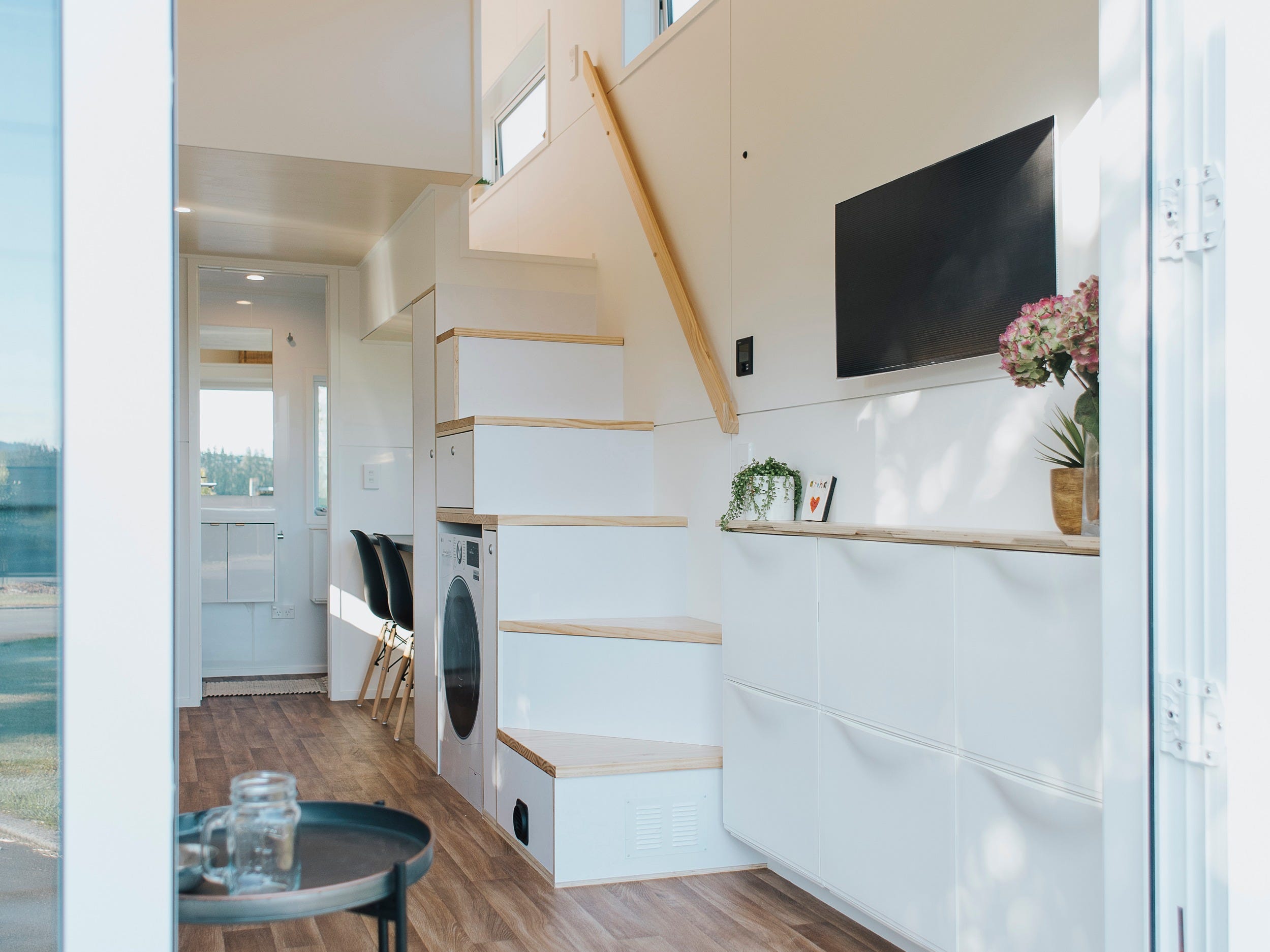 The washing machine is located next to the pantry. 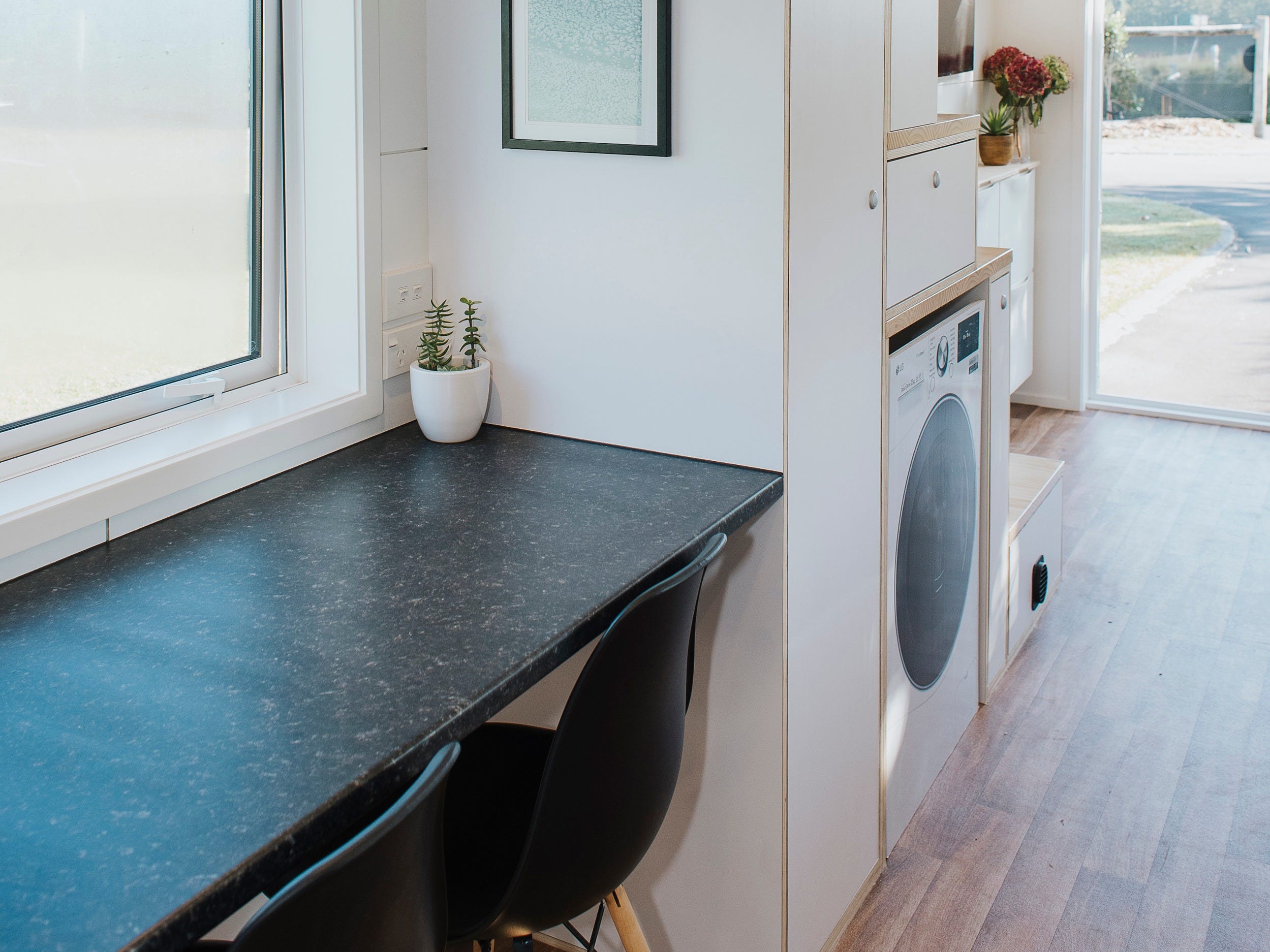 The bedroom — which can fit a king bed — is located upstairs. 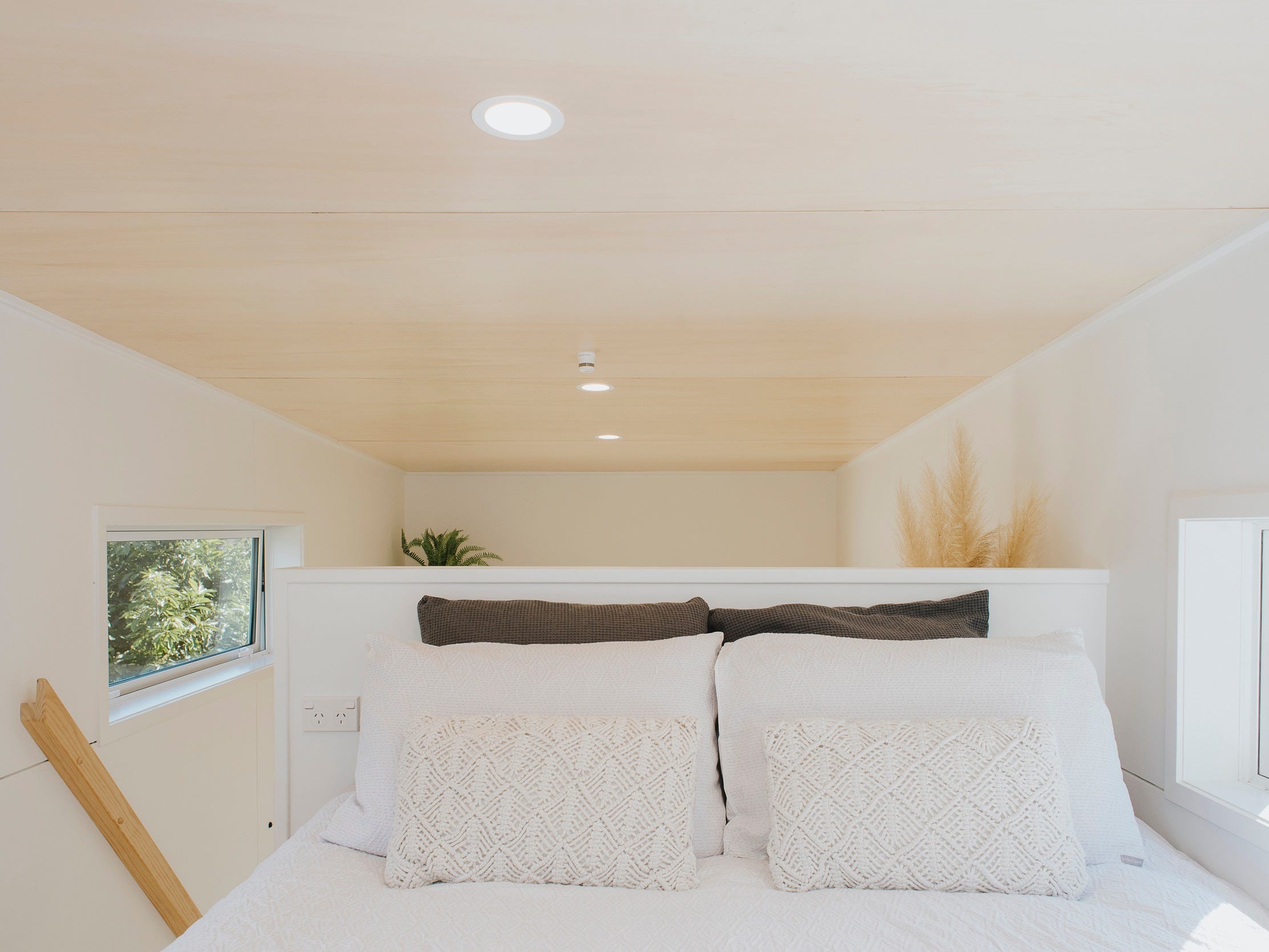 Across the bed is a series of cupboards and storage baskets that take the place of a traditional closet. 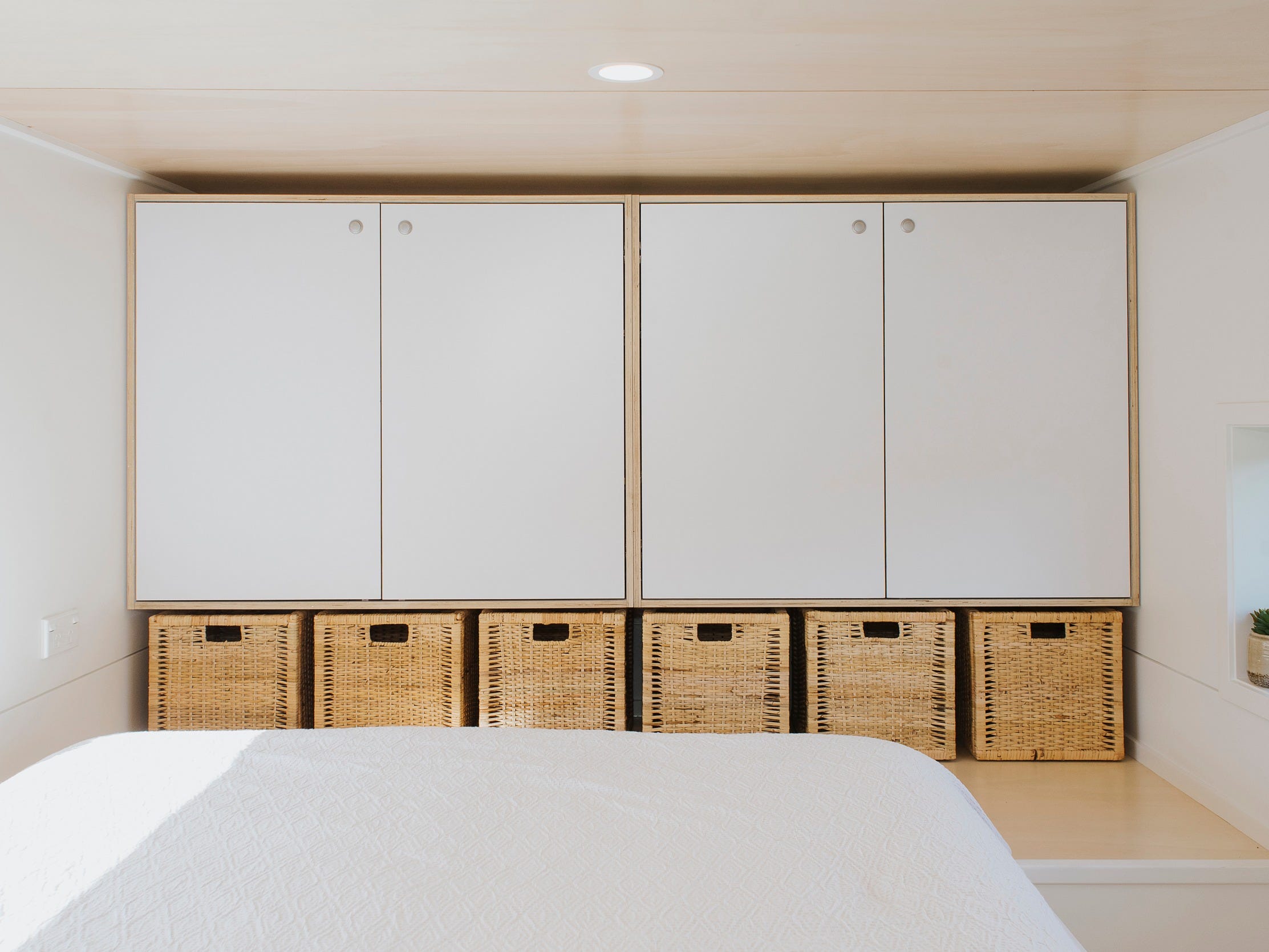 The upstairs also includes a ledge that hangs above the living room. 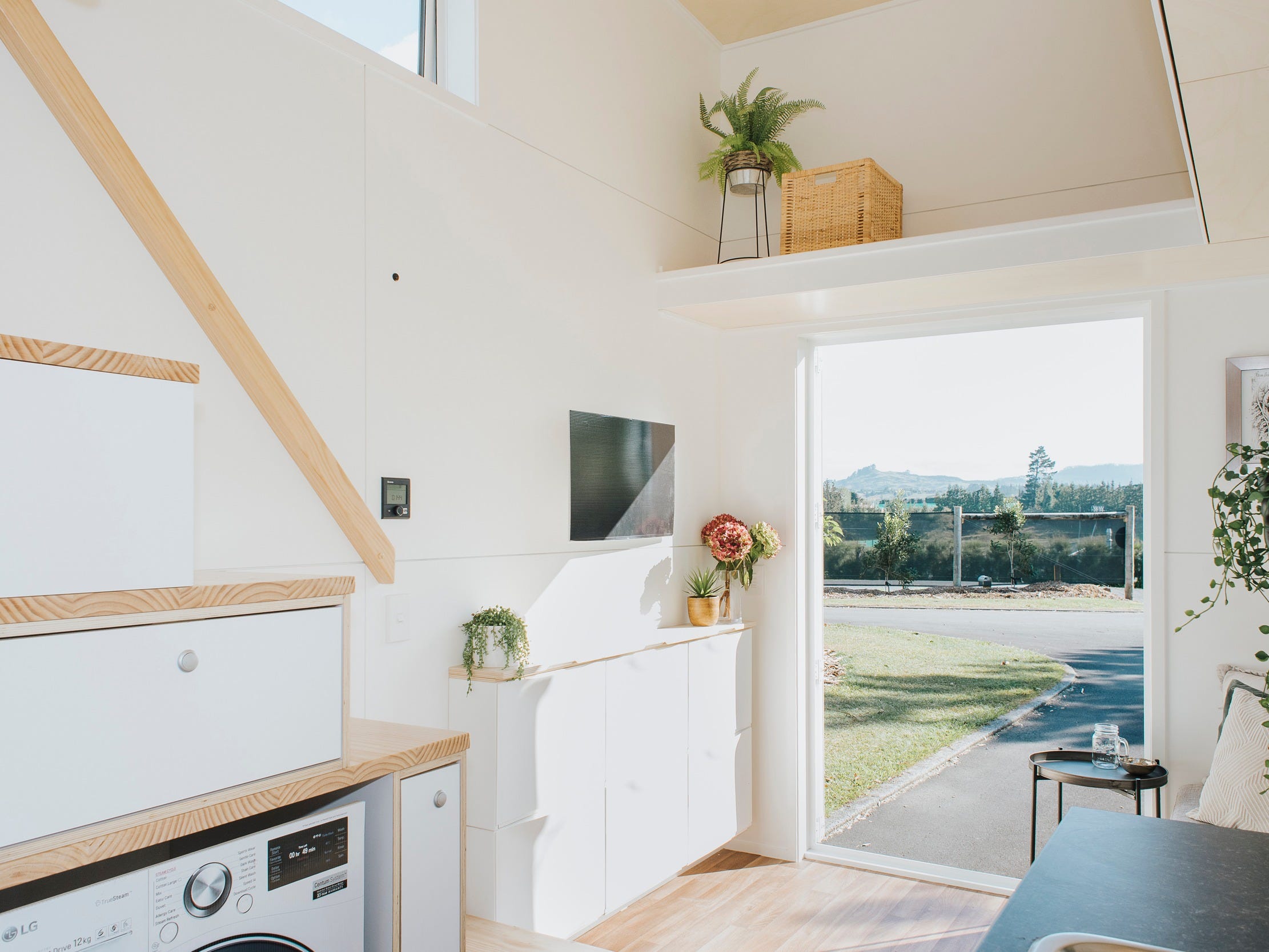 This ledge allows for the keeping of bulkier items that otherwise don’t fit in any of the storage units across Bitser. 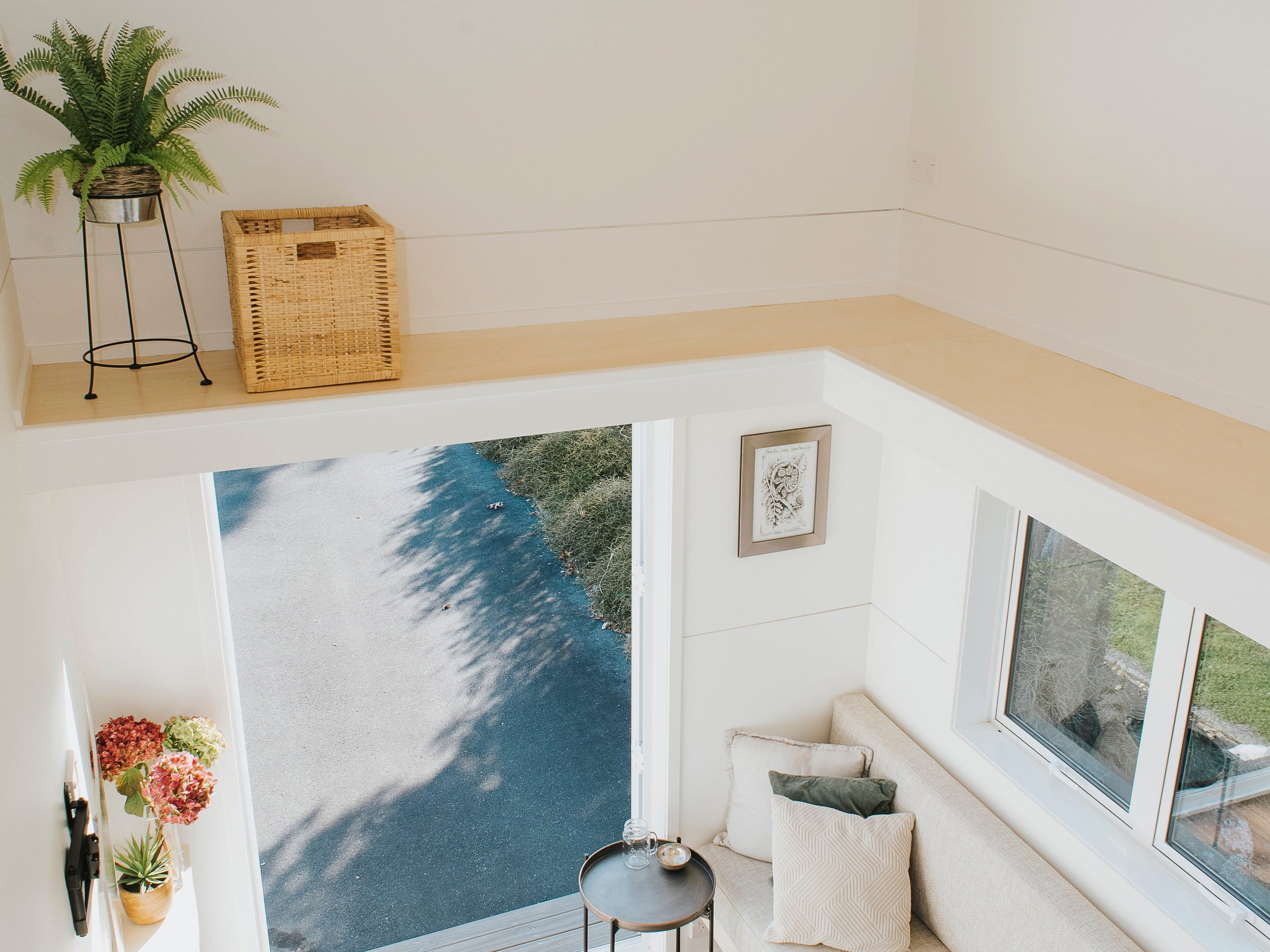 During a sunny day, the interior of the tiny home is lit with natural light through windows that are located in every room, including the bathroom and upstairs bedroom. 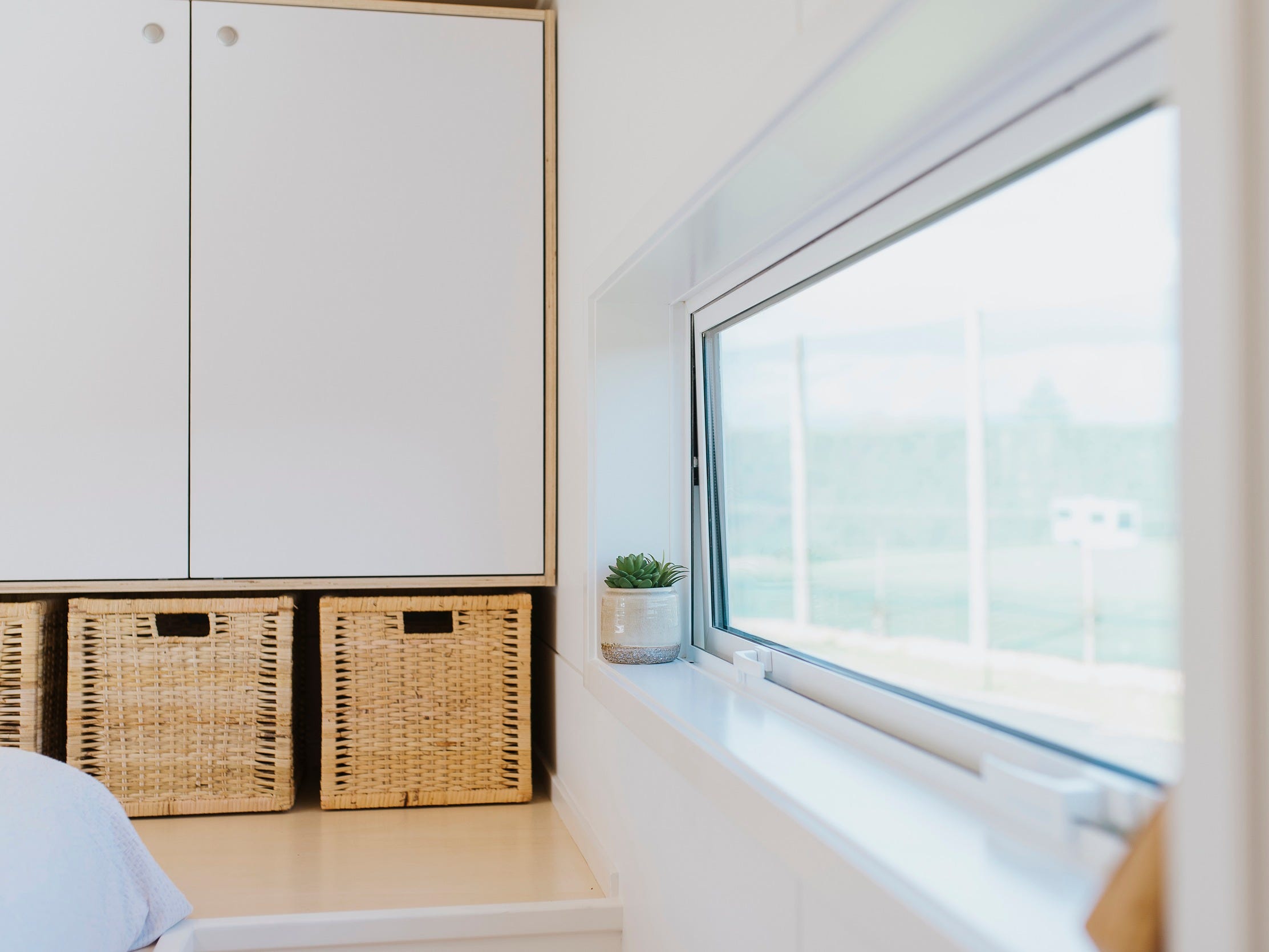 But for cloudy afternoons and nighttime, the home can be brightened up with its recessed lights. 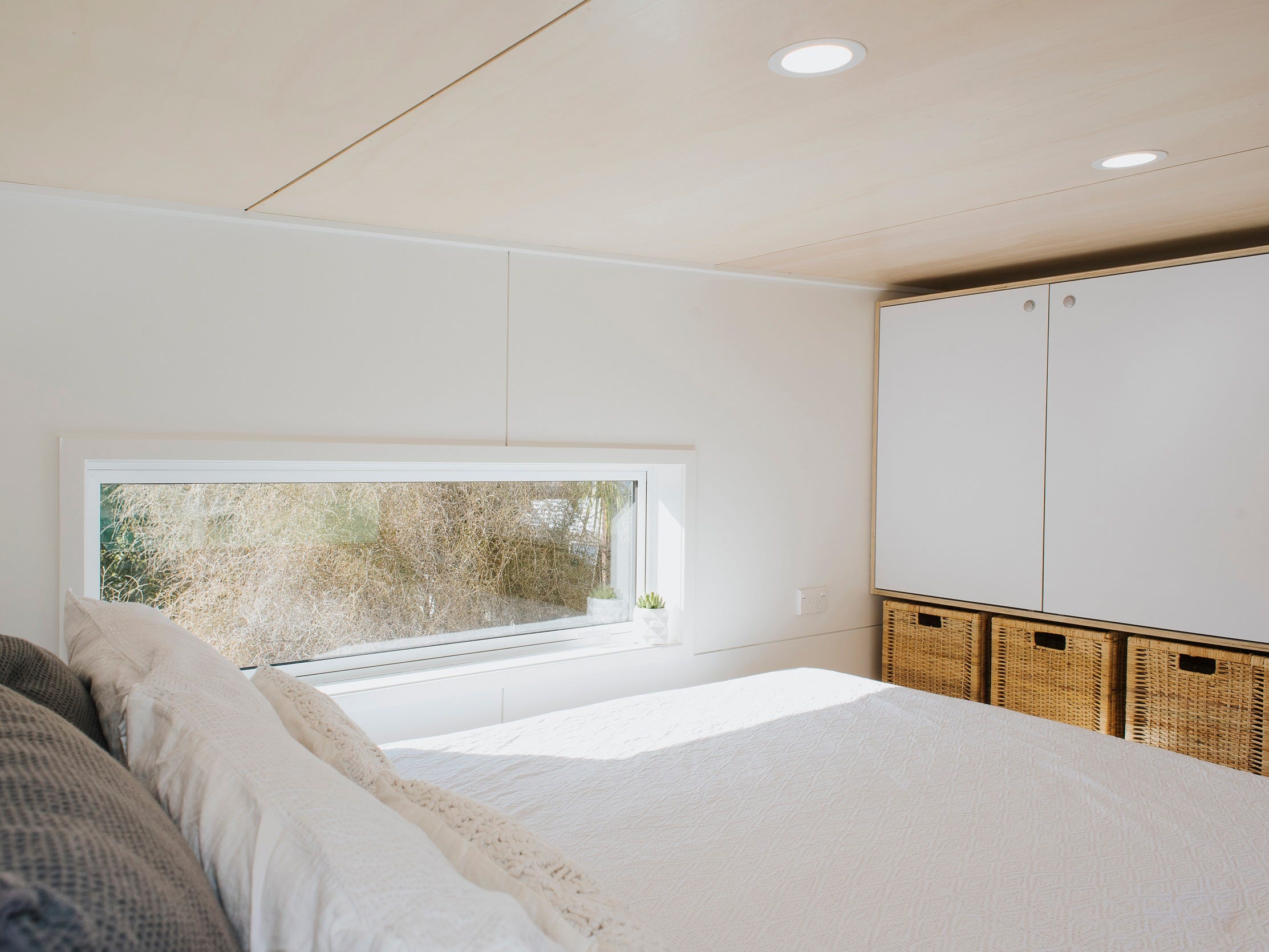 For colder nights, Blister comes with a gas heater. 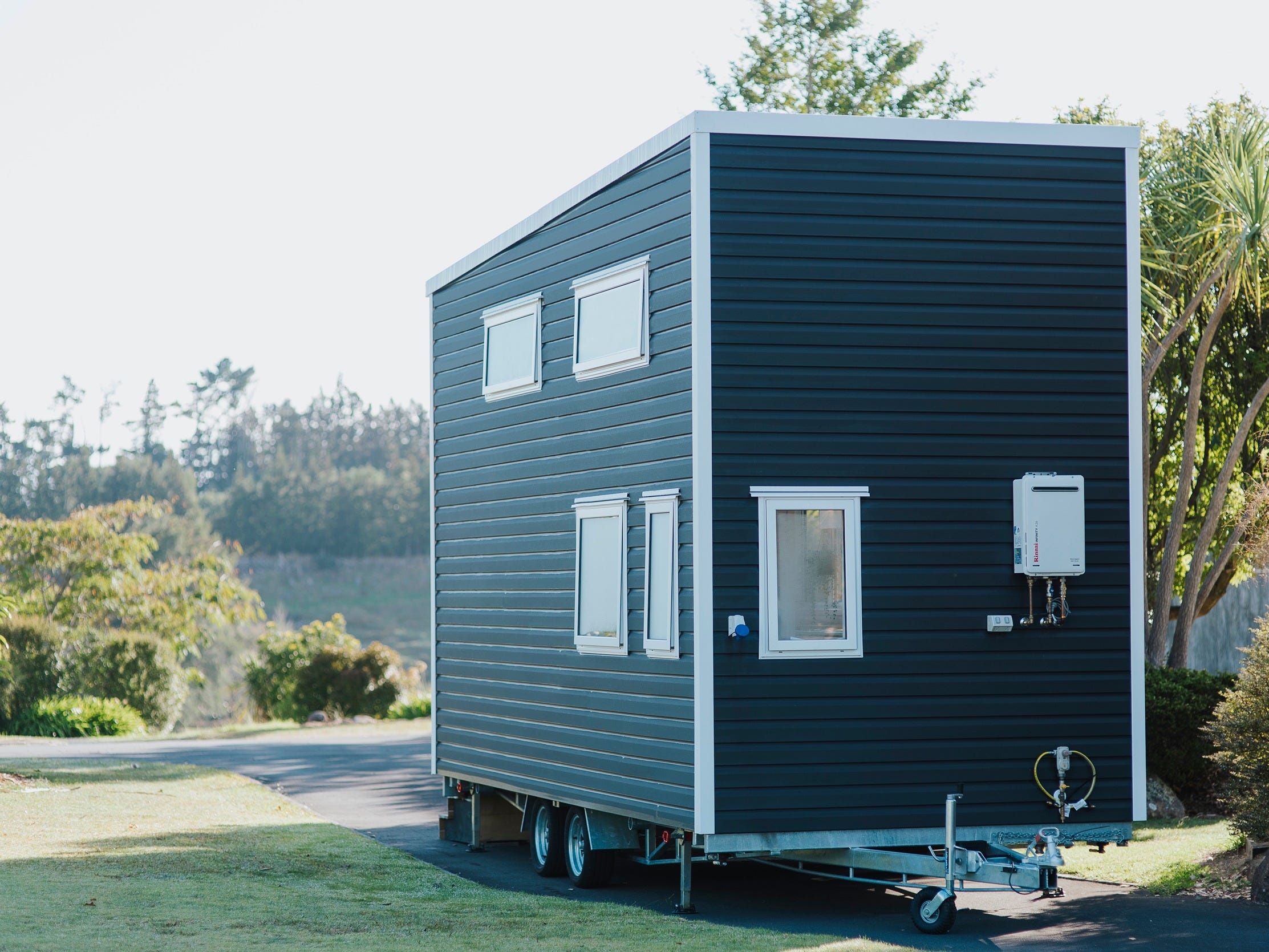