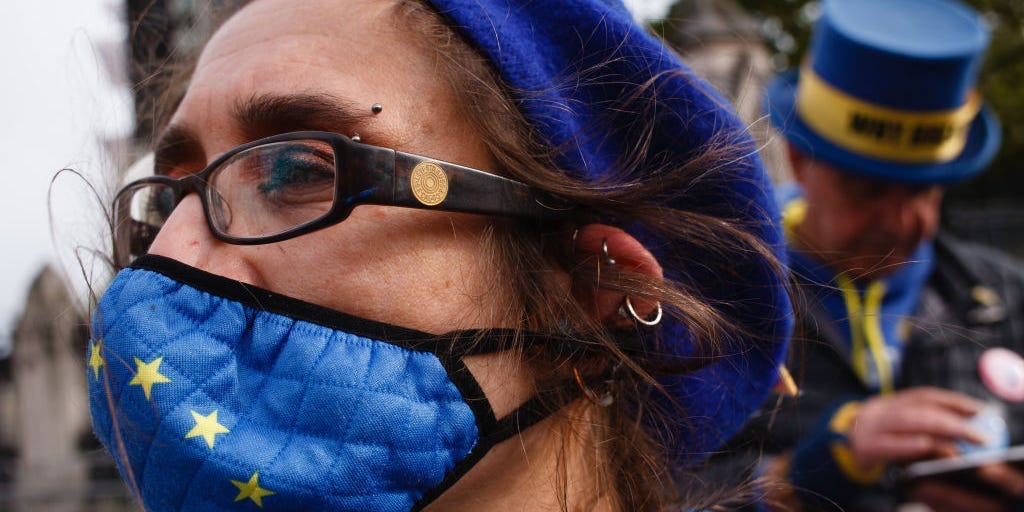 David Cliff/NurPhoto via Getty ImagesAn anti-Brexit activist wearing a face mask in the design of the EU flag demonstrates outside the Houses of Parliament in London, England.

Over 70 British business groups have made a last-ditch effort to urge Britain and the EU to reach a compromise trade deal, according to a statement from the Confederation of British Industry.

The groups involved come from a diverse range of industries including technology, financials, automotives, aviation, farming, pharmaceuticals, and chemicals. They said that securing a prompt trade agreement “matters greatly for jobs and livelihoods.”

The Confederation of British Industry, British Retail Consortium, TheCityUK, techUK, and the Society of Motor Manufacturers and Traders are some of the organisations that united to urge both sides to reach an agreement.

“With compromise and tenacity, a deal can be done. Businesses call on leaders on both sides to find a route through,” the groups said.

The group of trade organisations, which represents about 7 million people, or close to 200,000 companies, said that an ambitious trade deal would impact business efforts to prepare for the end of the Brexit transition period later in December.

“It will help investment by removing the threat of tariffs and quotas. And it will catalyse confidence through enhanced customs co-operation while making a precious data agreement possible, vital for services industries which make up 80 per cent of the UK economy.”

“With each day that passes, business resilience is chipped away,” the groups said.

“The UK’s aerospace, defence, space and security industries will face major disruption without a deal, through delays to cross-border trade, costly administrative requirements and a new regulatory system,” Paul Everitt, chief executive of ADS, said in a statement. “Businesses in our sectors are facing a daily struggle to survive as a result of the Covid-19 crisis, which has put 30,000 aerospace jobs at risk.”

Michael Gove, a senior British official, said on Monday the door is still “ajar” for the European Union to hold post-Brexit talks if Brussels officials change their minds on some key points. His statement contrasted to Prime Minister Boris Johnson saying last week that the UK must “get ready” to leave the transition period without an EU trade deal.