Brazil is on track to lead the world in coronavirus cases and deaths, and it still doesn't have a plan for tackling the outbreak 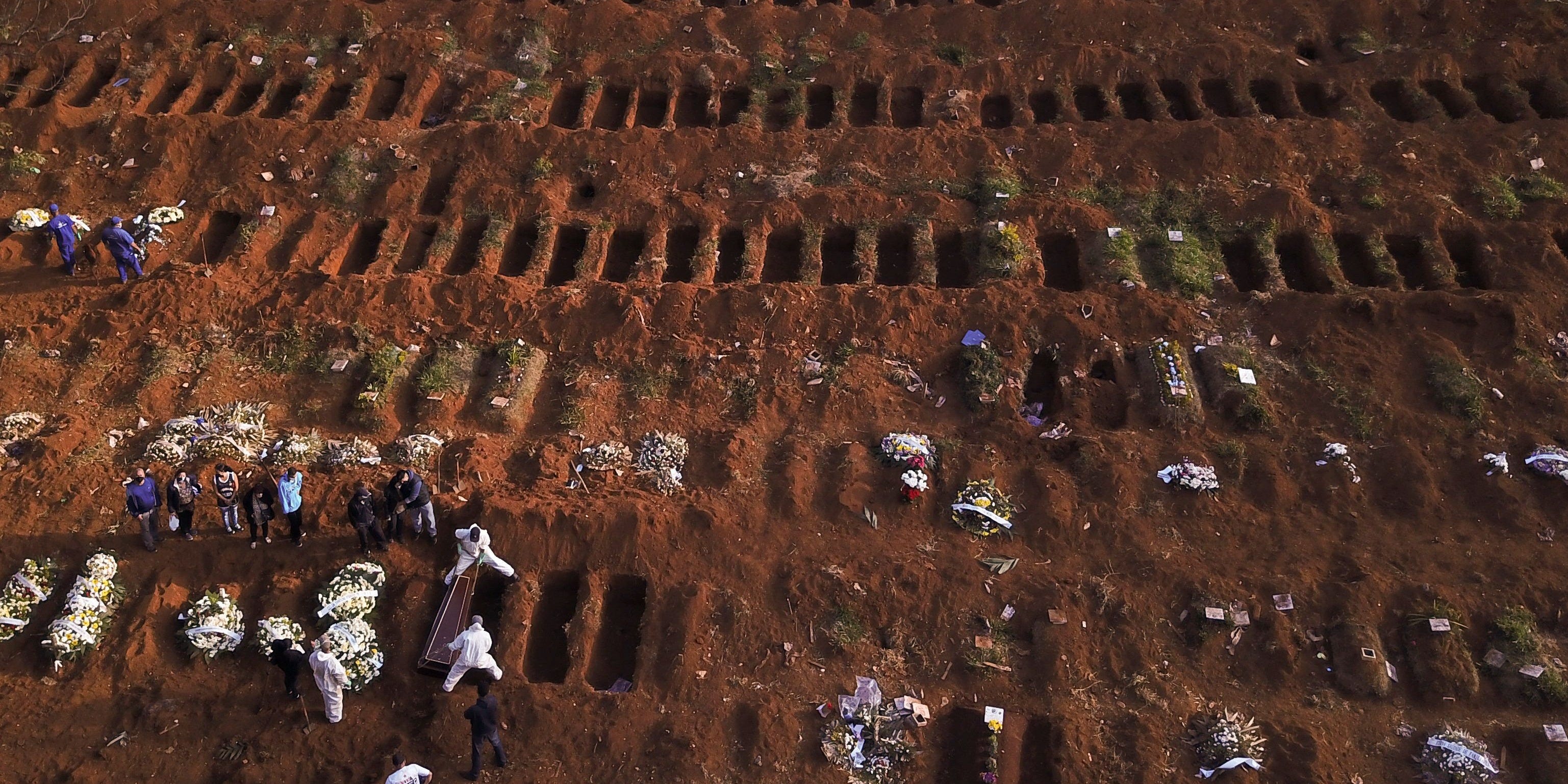 REUTERS/Amanda PerobelliGravediggers burying the coffin of a person who died from COVID-19 in Sao Paulo, Brazil, on May 22.

Brazil could surpass the US in both coronavirus infections and deaths by the end of July, according to the main coronavirus tracking model from the University of Washington.

The country, which has yet to impose a national coronavirus lockdown, is on its way to registering more than 4,000 daily deaths, The Washington Post reported, citing the university.

As of Tuesday, Brazil had more than 923,000 coronavirus infections and more than 45,000 deaths. Experts told Reuters the true number of cases was most likely higher.

As The Post noted, the country doesn’t have the same infrastructure to help it handle such a large outbreak as the US. But that hasn’t stopped President Jair Bolsonaro from largely dismissing the crisis the novel coronavirus is causing.

In fact, he’s even attacked governors who chose to impose restrictions and threatened to host large barbecues in spite of public-health advice, The Post reported.

Brazil has not initiated a national testing campaign, has not implemented a national lockdown, and is dealing with insufficient healthcare expansion. Reuters reported that that country counted 34,918 new daily coronavirus cases on Tuesday.

In a report in early May, Carlos Machado, a senior scientist with Brazil’s Oswaldo Cruz Foundation, and his team warned that without a lockdown in Rio de Janeiro, the outcome would be “in a human catastrophe of unimaginable proportions.”

He now says had his warnings been taken seriously, the outcome would not have been so bleak.

“From the point of view of public health, it’s incomprehensible that more-rigorous measures weren’t adopted,” Machado told The Post. “We could have avoided many of the deaths and cases and everything else that is happening in Rio de Janeiro. It was an opportunity lost.”

Scientists in the country told The Post that the country was veering into unknown territory.

“We are doing something that no one else has done,” Pedro Hallal, an epidemiologist at the Federal University of Pelotas, told The Post. “We’re getting near the curve’s peak, and it’s like we are almost challenging the virus. ‘Let’s see how many people you can infect. We want to see how strong you are.’ Like this is a game of poker, and we’re all in.” 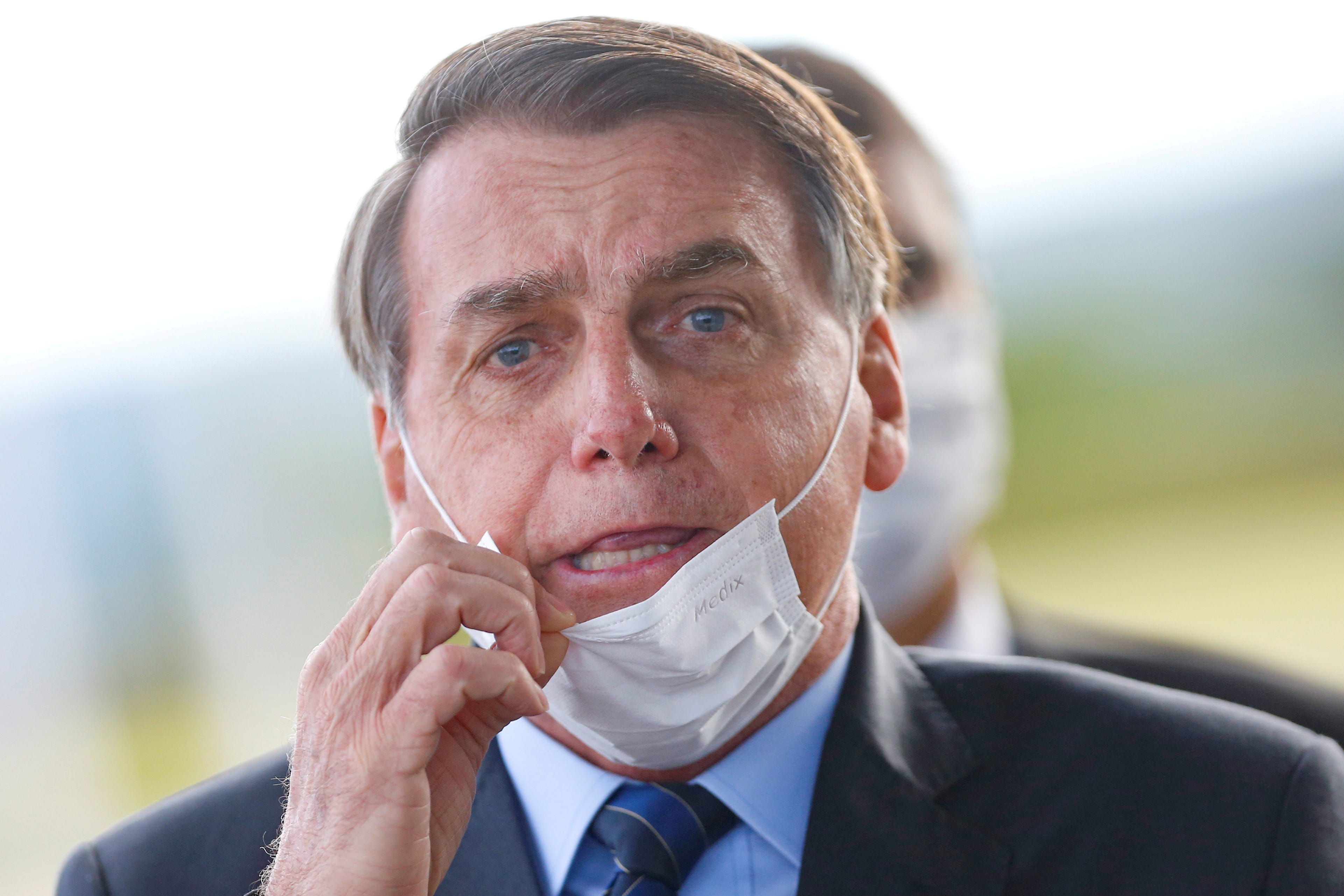 Reuters reported that senior officials leading Brazil’s coronavirus response had claimed the outbreak was under control.

“There is a crisis, we sympathise with bereaved families, but it is managed,” said Braga Netto, who spoke during a webinar held by the Commercial Association of Rio de Janeiro.

“We are not seeing transmission slowing down” in Brazil, Etienne said.

Etienne said the country accounted for about 4 million coronavirus cases in the Americas and about 25% of the deaths.

The Post described Bolsonaro’s approach as being to ignore and sideline health experts. The Brazilian president fired Luiz Henrique Mandetta, his first health minister, after disagreements on social distancing, and then he fired his replacement, Nelson Teich, because he disagreed with the use of chloroquine as a treatment for coronavirus.

Similar to US President Donald Trump, Bolsonaro has boosted the use of hydroxychloroquine in the past. On Monday, the US Food and Drug Administration revoked the emergency-use authorization issued for the antimalarial drug.

One expert said even the public in Brazil did not heed public-health advice to limit the spread of the virus and continued to congregate without any safety measures implemented.

“It was a failure,” Ligia Bahia, a professor of public health at the Federal University of Rio de Janeiro, told The Post. “We didn’t have enough political force to impose another way. The scientists alone, we couldn’t do it. There’s a sense of profound sadness that this wasn’t realised.”