Deep in the Brazilian wetlands, a jaguar named Amanaci was recently rescued from raging fires in the Pantanal â€” the world’s largest wetland.

She’s undergoing an experimental stem cell treatment after surviving the deadly wildfires blazing through the wetlands since July.

She was rescued by volunteers from the NEX Institute in Brazil â€” an NGO dedicated to protecting endangered wild cats. Few are as lucky as this jaguar.

“It makes me angry and sad seeing how these animals are suffering,” NEX founder Cristina Gianni said. “And also how we have got to this stage, because of a lack of prevention.”

The spotted cat was found with severe burns. NEX scientists took Amanaci’s cells, cultivated them in a lab, then injected them into her paws.

The Pantanal stretches across Brazil, Bolivia, and Paraguay, and is one of the planet’s most biodiverse ecosystems. This year’s fires have already destroyed nearly one-fifth of the Pantanal.

Tourists flock to the Pantanal for its dense population of jaguars, not to mention the scores of other species like tapirs, giant river otters, caimans, and capybaras. But thousands of these animals, including an estimated 600 jaguars, are now dead.

NEX works with veterinarians to help save jaguars it gets to on time, like Amanaci. The organisation treated its first feline with stem cells nine years ago for a fractured front paw. 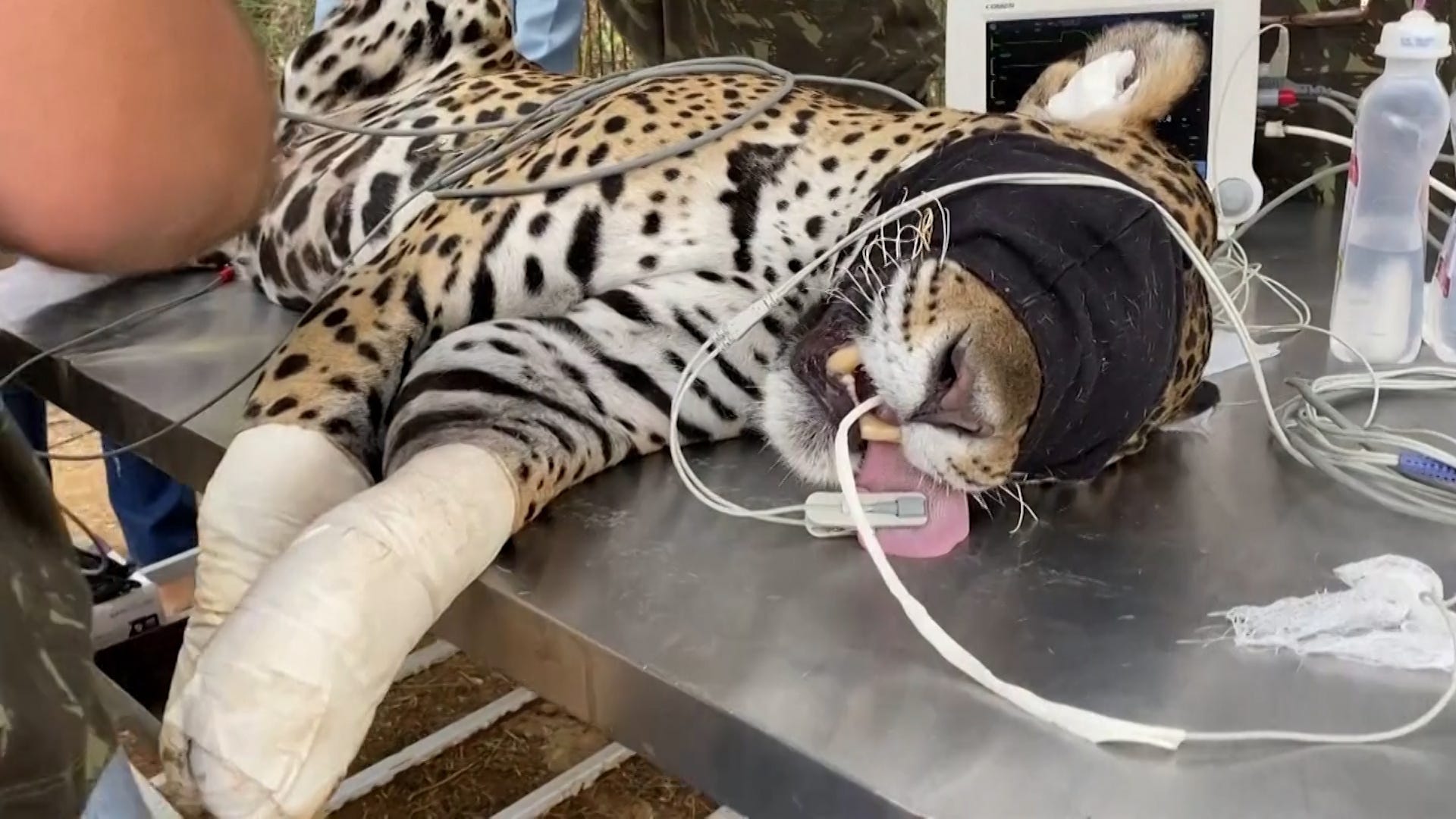 ReutersAmanaci, a jaguar, was found with severe burns, and was treated with stem cells.

Around the world, stem cells have generated excitement in the scientific community for their potential to help both people and animals heal quickly, but it remains unclear if the treatments actually work.

“The result (with stem cell treatment) is surprising,” veterinarian Patricia Malard said. “People are very happy with how the injury is evolving.”

The fires threatening these animals are often man-made. Every year, ranchers use fires to cheaply return nutrients to the soil and renew pasture for their beef cattle. But scientists say climate change is only making the problem worse.

Brazilian President Jair Bolsonaro’s government has been criticised by environmentalists and local media who say he is emboldening illegal ranchers and land speculators who set fire to land to increase its value for agricultural use. It’s a claim he denies.

This year’s fires are the worst since record-keeping began in 1998.

As for Amanaci, the dressings around her paws are changed periodically, and she’s left in her cage to continue recovering. It’s unclear if she’ll be able to go back to the wild, as that could mean sending her right back into danger.

Activists at NEX fear it’s only a matter of time before these fires destroy Amanaci’s homeland.

“In the end we have to deal with the cause (of the fires), because we are used to suffering but this is nothing like we have ever seen before,” Gianni said.