The life and rise of Brad Pitt, who went from a $6,000 breakout role in 'Thelma & Louise' to commanding millions per movie as Hollywood's leading man 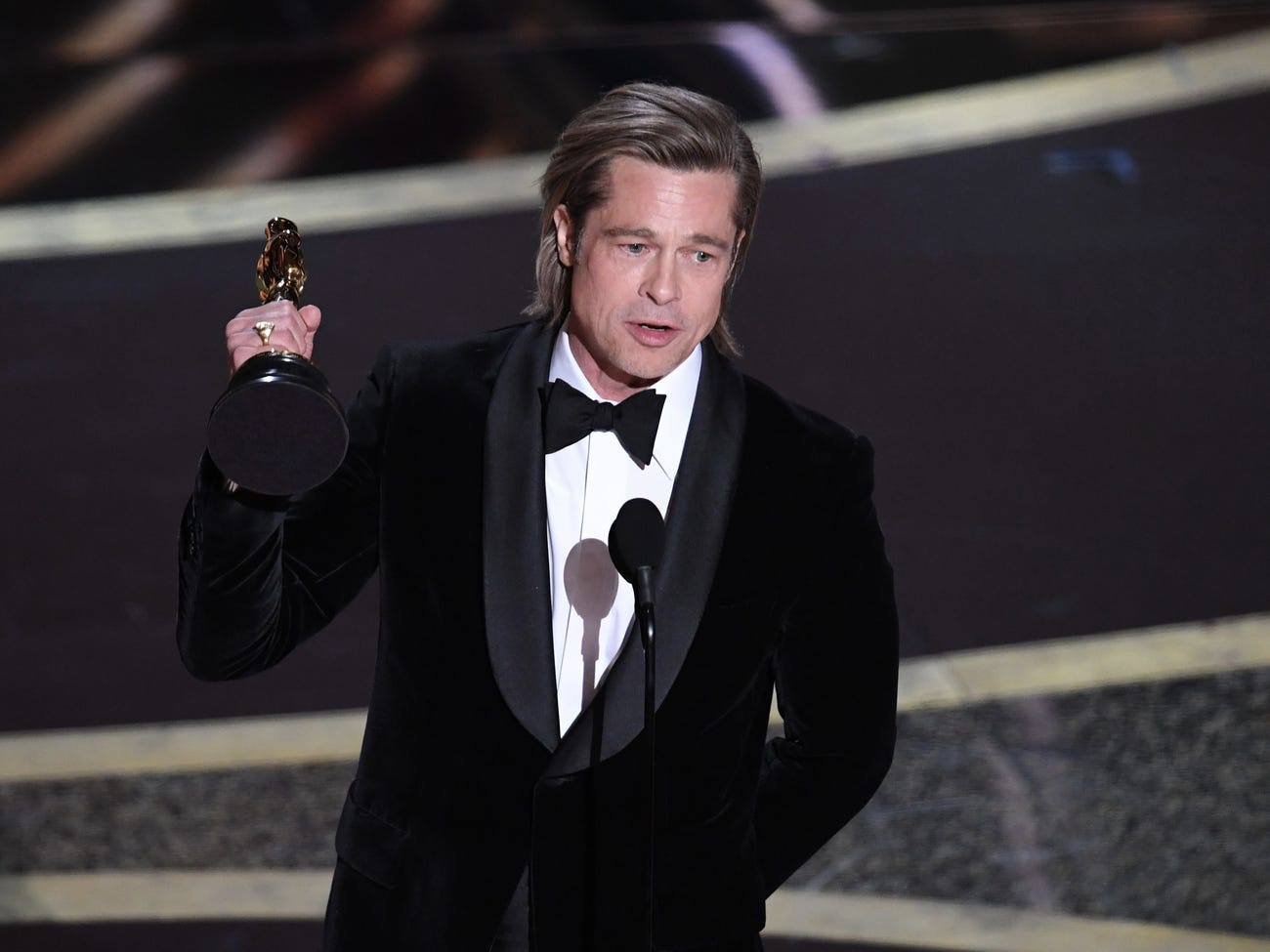 Kevin Winter/Getty ImagesBrad Pitt thanked his children, who ‘colour everything’ he does, while accepting his first Academy Award for acting on Sunday.

Brad Pitt won his first-ever Oscar for acting at the Academy Awards on Sunday. Since he first came on the scene in the late 1980s, he’s earned a total of 106 awards and 186 nominations.

While there’s no verifiable net worth estimate for Pitt, his typical yearly earnings are comfortably in the millions. Forbes estimated his total paycheck was around $US31.5 million in 2016 alone. And that’s not just from acting – Pitt is an accomplished producer with his own production company, as well.

He primarily spends his money on real estate and philanthropic efforts.

A spokesperson for Pitt didn’t immediately respond to a request for comment on Pitt’s net worth or personal life from Business Insider.

Keep reading for a look at how Pitt makes and spends his fortune. 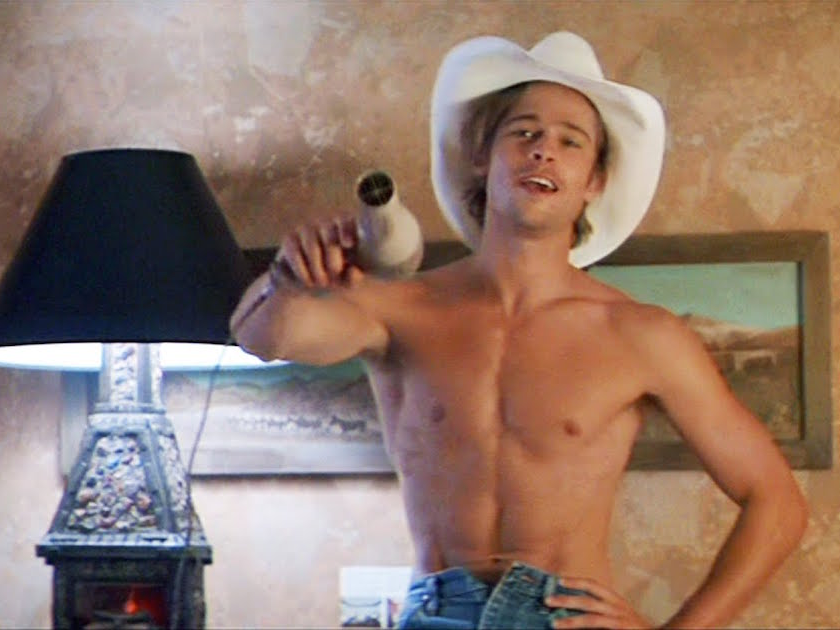 Pitt had just seven minutes of screen time in the Geena Davis and Susan Sarandon cult classic “Thelma and Louise.” The 1991 movie gave Pitt his first big break, albeit with a rather small payday of just $US6,000, according to The Telegraph.

Most recently, Pitt was paid $US10 million for his role in Quentin Tarantino’s “Once Upon a Time in Hollywood.” 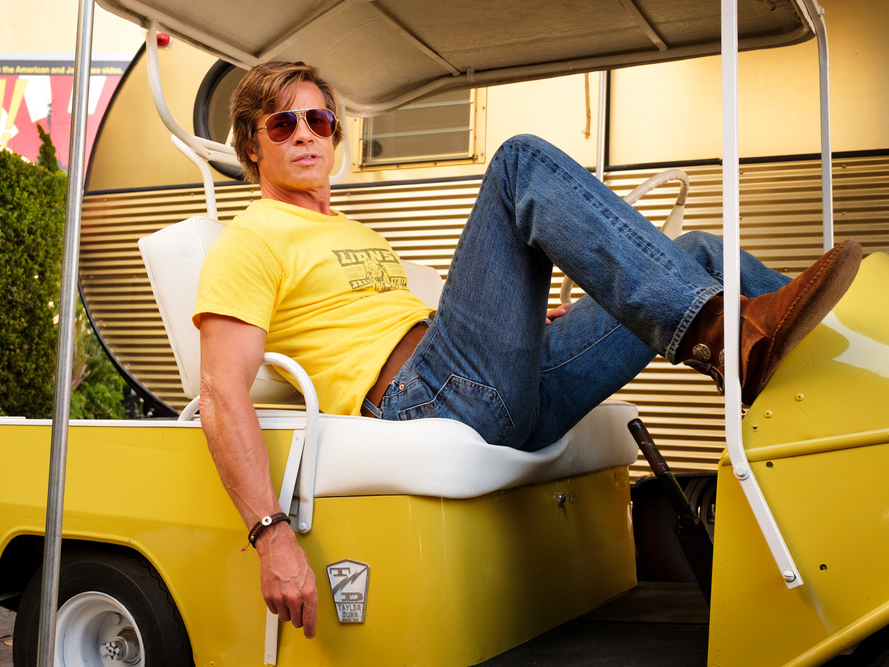 SonyPitt as 1960s stuntman Cliff Boothe in ‘Once Upon a Time in Hollywood.’

His role as a 1960s stuntman in Tarantino’s movie earned him his first Oscar win for acting, but his upfront payday for the film was significantly lower than the typical $US20 million Pitt pulls in from other blockbusters like “World War Z.” This can be attributed to differences in payment models.

For movies like “Ocean’s Eleven” and “Inglorious Bastards,” Pitt was paid a base salary, but he also received bonuses depending on the success of the film post-release. 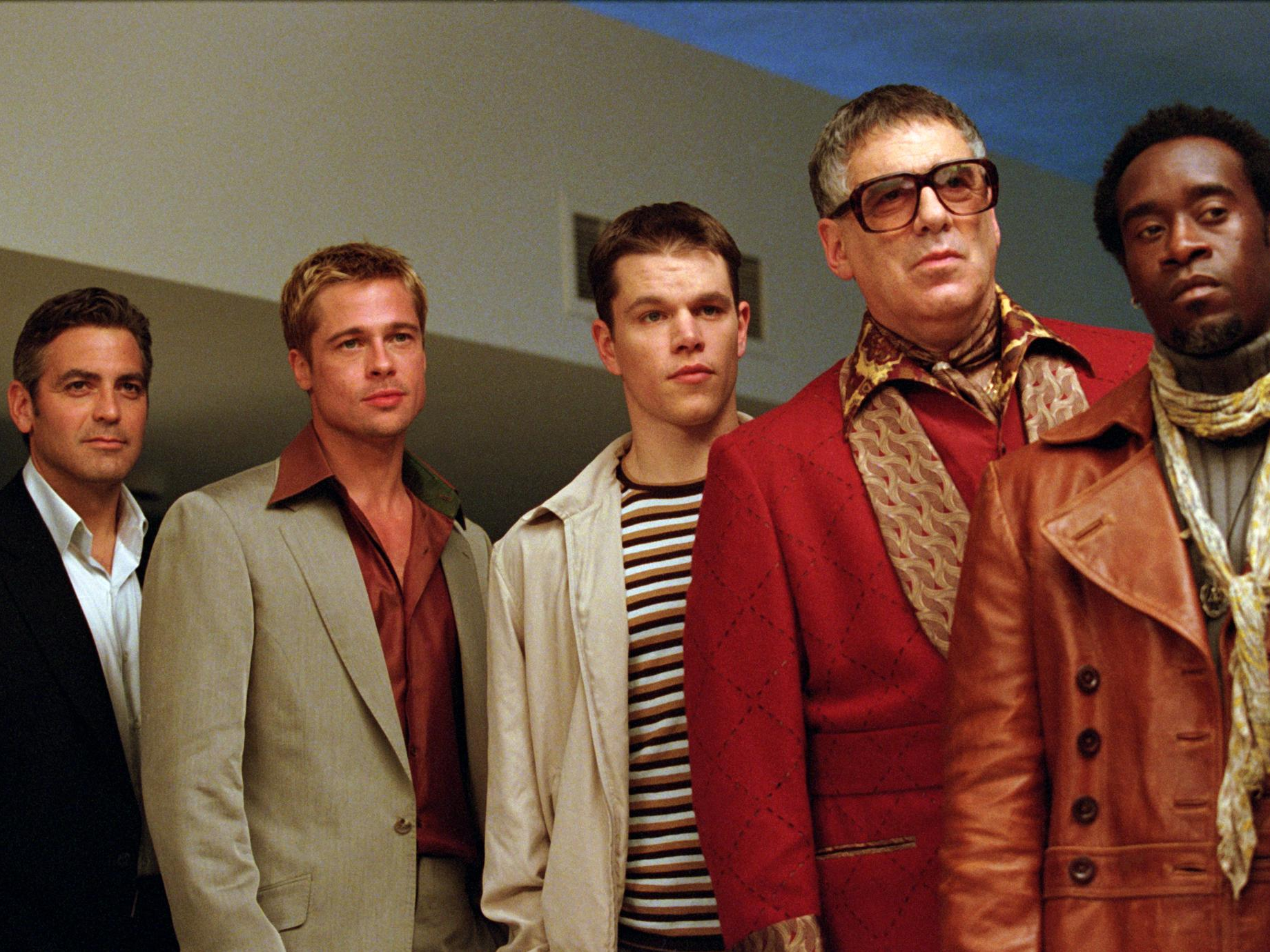 The payment model varies for actors from movie to movie, and Pitt certainly isn’t struggling because of it. 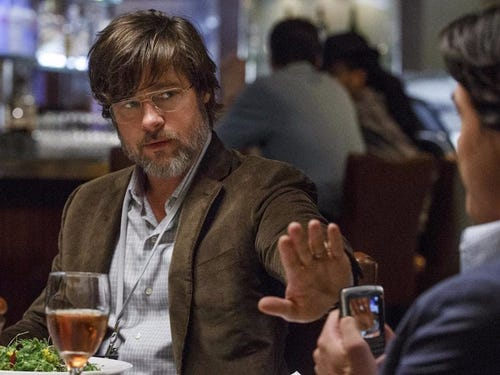 Paramount PicturesPitt as Ben Rickert in The Big Short.

But that number isn’t just from his paychecks as an actor – Pitt is also a producer.

He produced and acted in the 2015 Oscar-winning film “The Big Short,”which grossed over $US133.3 million worldwide.

That same year, he also produced and acted in “War Machine,” which Netflix reportedly paid $US60 million to acquire.

Pitt founded a production company, Plan B Entertainment, with ex-wife Jennifer Aniston in 2001. 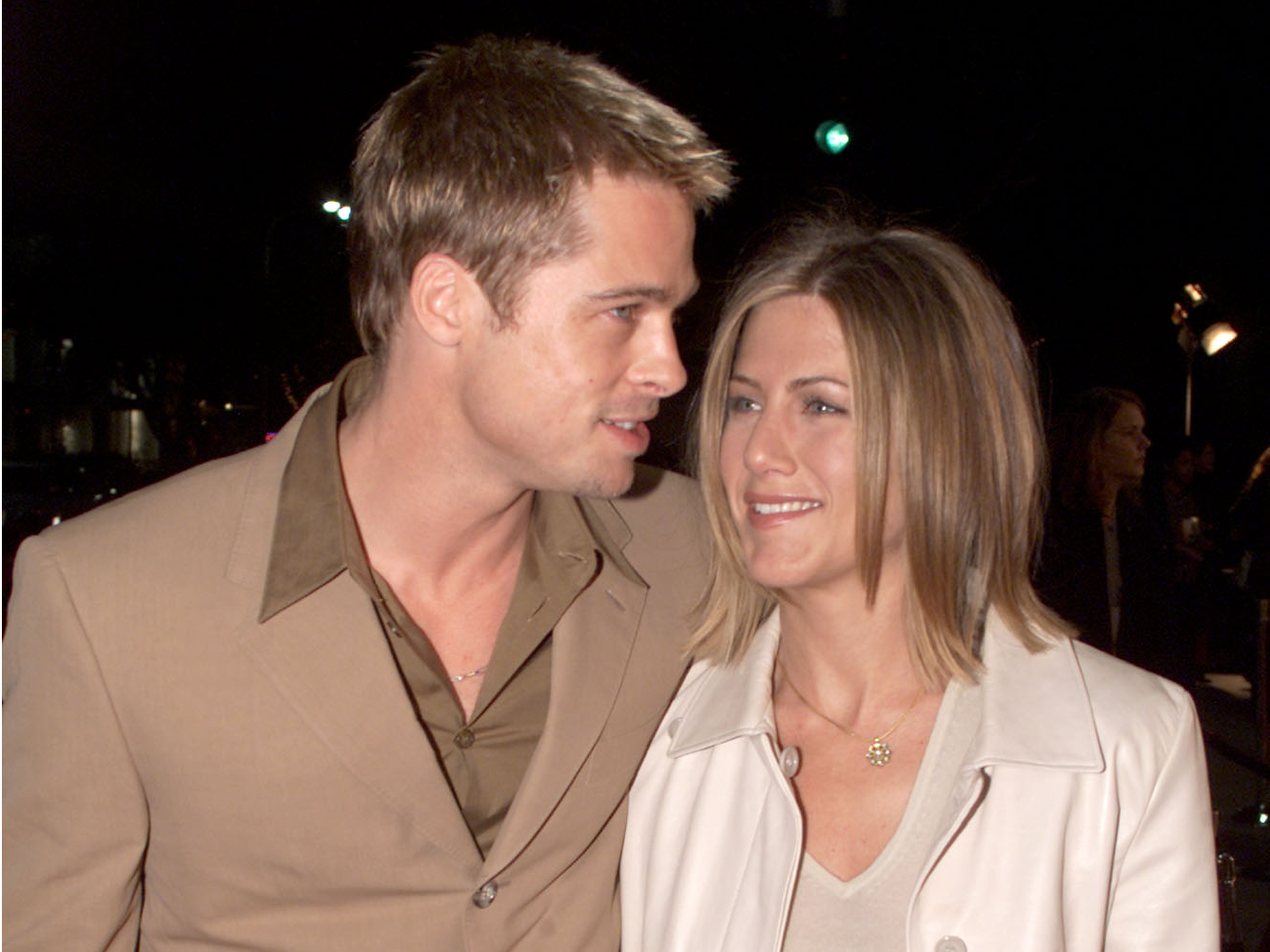 Pitt is currently the sole owner of Plan B, as he bought out Aniston’s stake upon their divorce in 2005.

The production company’s first movie was “Charlie and the Chocolate Factory,” which ultimately grossed half a billion dollars worldwide. The company was also behind 2006’s “The Departed,” 2010’s “Eat, Pray, Love,” and 2011’s “Moneyball.”

More recently, Pitt and Plan B would go on to produce a number of culturally significant films, including “12 Years a Slave,” “Selma,” “Moonlight, “If Beale Street Could Talk,” and “The Last Black Man in San Francisco.”

While it is unclear how much money Pitt takes home as a producer, The Hollywood Reporter estimates that actors who cross over into producing successfully take home a decent chunk of change – for example, Adam Sandler earned $US5 million to produce “Grown Ups 2,” a movie he also starred in. 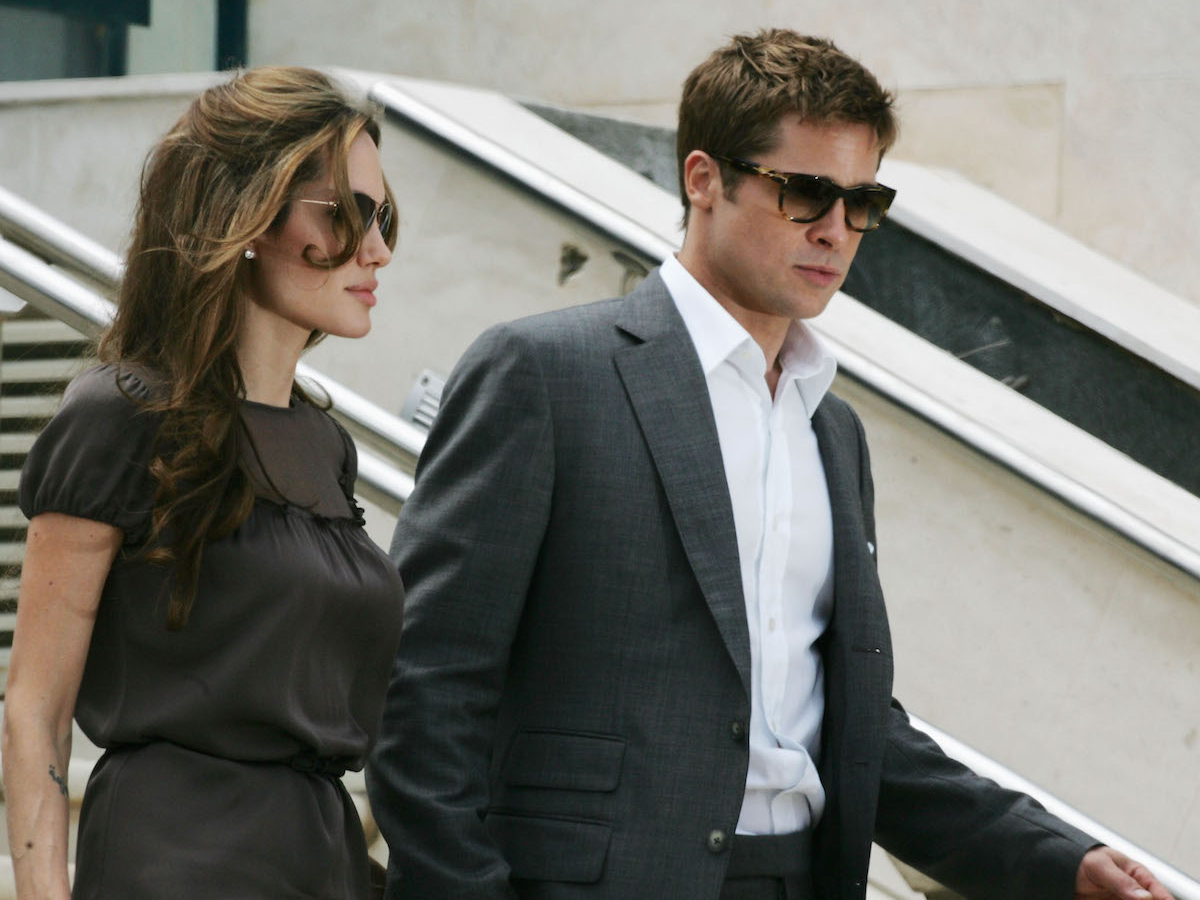 The power couple went on to monetise their relationship in a number of ways. They sold never-before-seen photos of their growing family to media outlets – including some of the most expensive exclusive photos to date. After the birth of their twins, Knox and Vivienne, in 2008, Pitt and Jolie sold photo rights of the children to People and Hello! magazine for $US14 million. They then reportedly donated those earnings to charity.

Both were involved in multiple philanthropic projects, even creating a joint foundation in 2006. Through the Jolie-Pitt Foundation, the pair made donations including $US1 million toward humanitarian efforts in Darfur in 2007 and $US2 million toward wildlife protection in Namibia in 2011.

In 2016, when the pair announced their split, Forbes estimated they had earned a combined $US555 million since 2004. The divorce proceedings for their two-year marriage have been tricky, with parts of their real-estate portfolio still yet to be divvied up.

One of the couple’s disputed assets is their sprawling French vineyard. The two were married on the estate in 2014. Jolie and Pitt have had a messy custody battle on top of difficulty separating assets: They are still arguing over who gets to keep the French estate, albeit privately with a judge.

Chateau Miraval, a 1,200-acre estate in Correns, France, has been part of the Jolie-Pitt real-estate portfolio since 2012, but they have reportedly rented the property since 2008. They bought the property for $US67 million, according to Us Weekly.

It features 35 rooms and other non-residential spots like the chapel the pair were married in and a recording studio that Pink Floyd and Sting have used. The property also includes a vineyard that specifically produces rosé.

Pitt and Jolie still co-own the rosé brand made on the estate’s property. Pitt and Jolie brought in the Perrins, a French winemaking family known for their experience in Châteauneuf-du-Pape, to produce the wine. It is a 50-50 partnership, according to The Telegraph.

This business venture also undoubtedly earns Pitt a decent chunk of change. In June 2019, a single magnum bottle of Miraval sold for nearly $US3,000 at a charity auction, according to Forbes. The rosé is now widely sold and was even featured at the “Once Upon a Time in Hollywood” premiere after party.

As far as other real estate goes, Pitt and Jolie shared several properties. 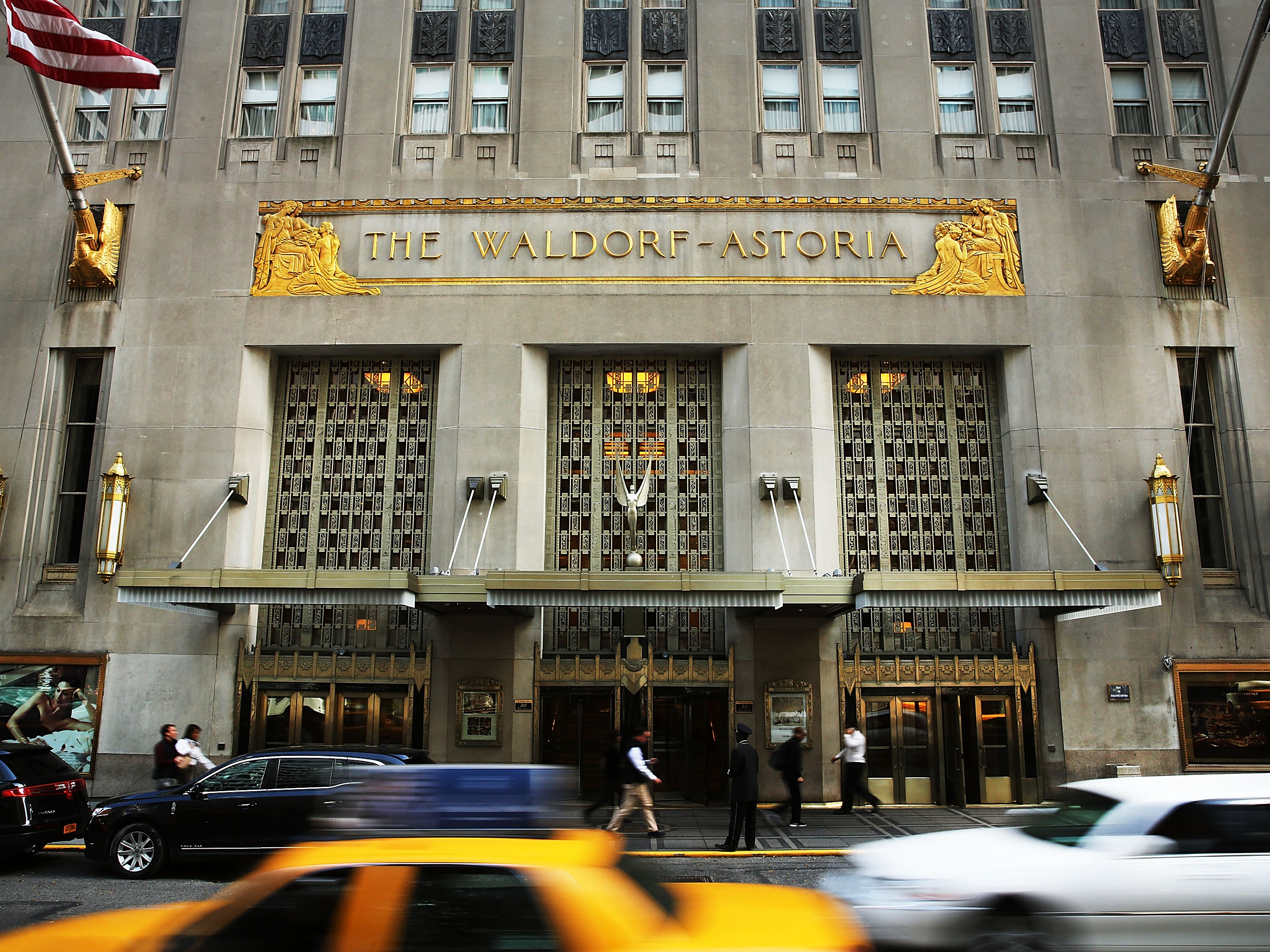 Spencer Platt/GettyThe Waldorf-Astoria in NYC, where Pitt and Jolie reportedly acquired an apartment in 2007.

In addition to the French chateau, the Pitt-Jolie family enjoyed several other homes around the world.

Their homebase was presumably the compound in Los Feliz, California, that Pitt bought for $US1.7 million in 1994. He reportedly spent years buying up adjacent property for added privacy in the Los Angeles neighbourhood.

The pair bought a mansion in New Orleans’ historic French Quarter for $US3.5 million. They were neighbours with Matthew McConaughey for a while, until they listed the home for $US6.5 million in 2015.

In 2007, they also purchased an apartment in Manhattan’s Waldorf-Astoria, known for its prime location and heavy security.

The couple also reportedly purchased a home in Mallorca, Spain, for $US2.65 million in June 2016. The eight-bedroom home has views of the Balearic Sea.

Pitt has also held other properties, including a Beverly Hills mansion he once shared with ex-wife Aniston that is currently on the market for $US44.5 million and a bachelor pad in Malibu. 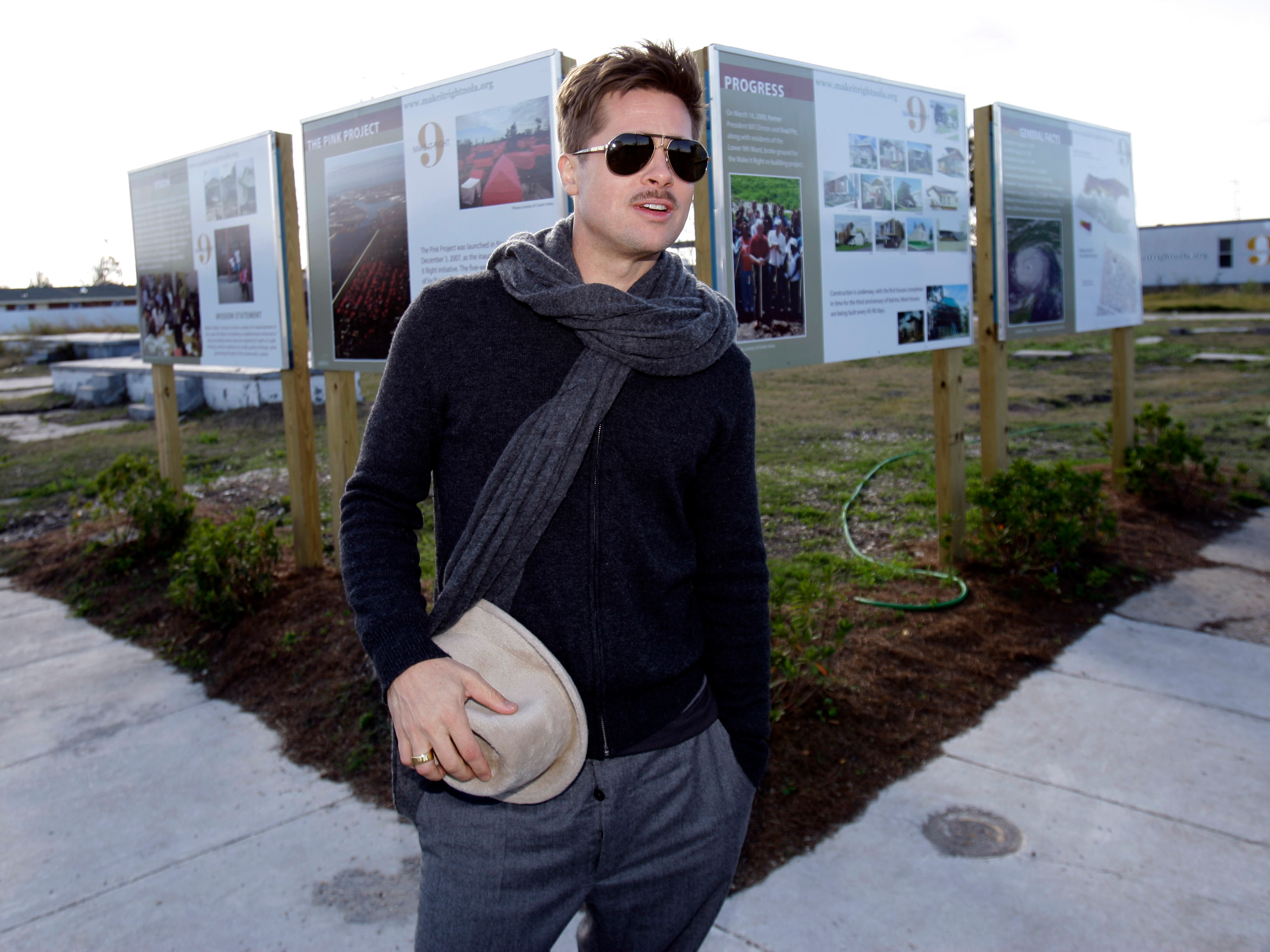 Alex Brandon/APBrad Pitt in New Orleans with the Make It Right foundation.

Through the Jolie-Pitt Foundation, Pitt has donated millions of dollars to various causes, personally donating part of his movie deal earnings to the foundation on a yearly basis. According to the Daily Mail, the foundation was worth $US41 million in March 2019.

In addition to the Jolie-Pitt Foundation, Pitt has also been involved in other philanthropic endeavours indvidually.

He founded the Make It Right foundation in 2007 to rebuild homes in New Orleans following Hurricane Katrina. Through the foundation, Pitt put $US26 million toward building 109 homes. The project was not without its pitfalls – rotting and collapsing new homes led to a lawsuit. Pitt made a statement through a spokesperson to NBC about the debacle in 2018: “I made a promise to the folks of the Lower Ninth to help them rebuild – it is a promise I intend to keep.” In the most recent development, Pitt and other foundation directors asked the court to remove them from the lawsuit, but the request was denied by a judge in New Orleans in October 2019.

Occasionally, Pitt will indulge in other millionaire activities. 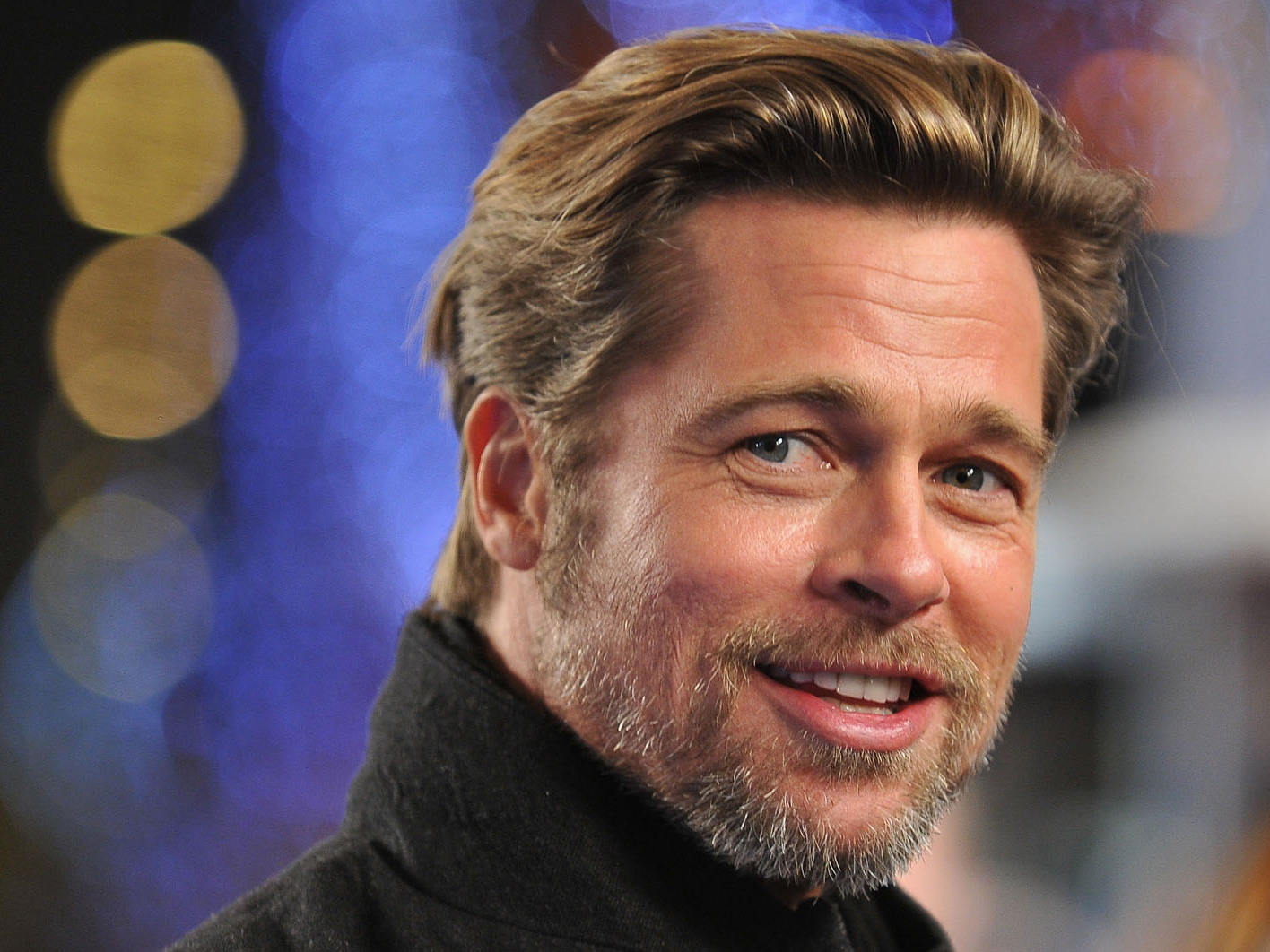 Those include spending family time aboard a superyacht that costs $US100,000 per week to rent and riding limited edition Ducati motorcycles.

He has also teamed up with upscale brands like Breitling and Brioni, which outfit him in €7,000 ($US9,000) wristwatches and tailored Italian suits that cost upwards of $US6,000 in exchange for his services as a brand spokesperson.