Brad Pitt and Leonardo DiCaprio have known each other for decades. Here's a timeline of their friendship. 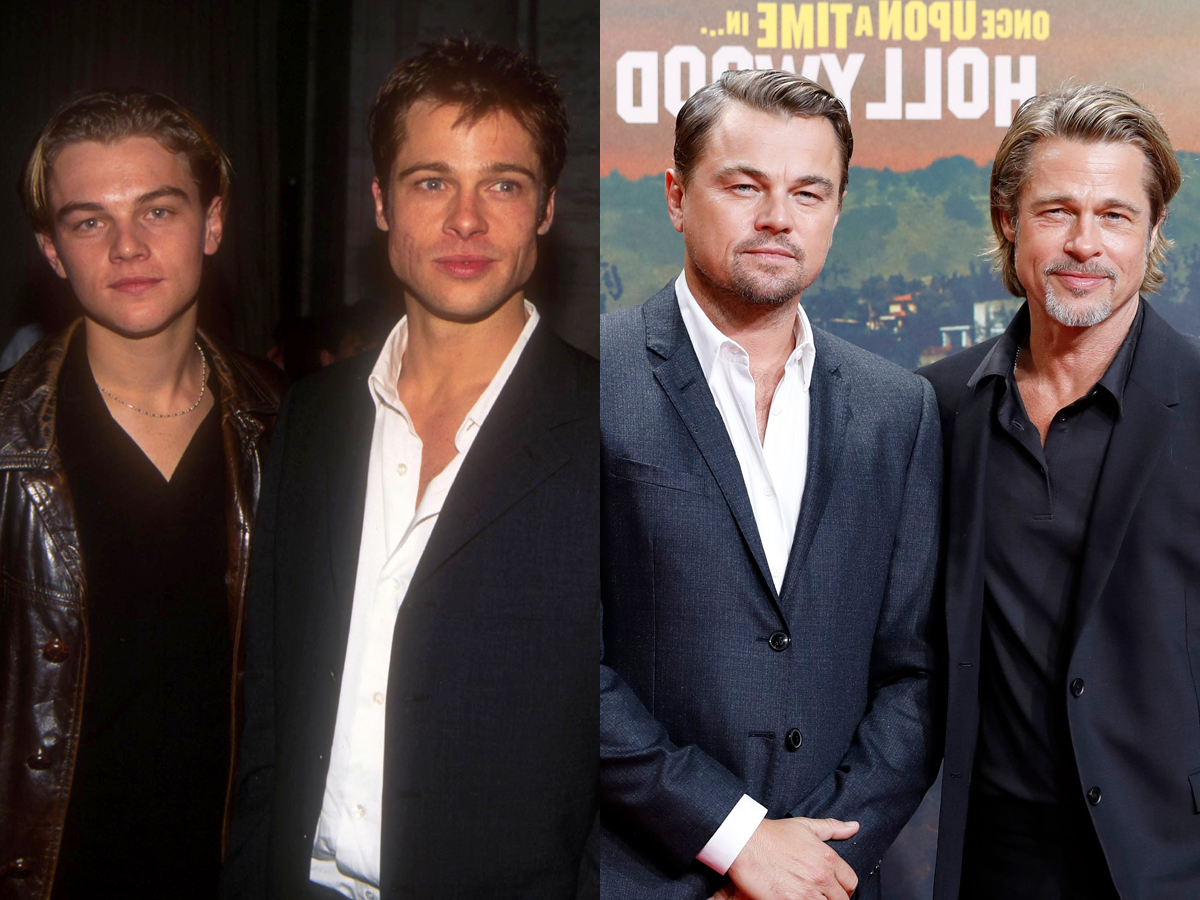 Patrick McMullan/Getty Images, John Rasimus / Barcroft Media via Getty Images)Leonardo DiCaprio and Brad Pitt are A-list actors who have been friends for decades.

Since the release of 2019’s “Once Upon a Time in Hollywood,”Brad Pitt and Leonardo DiCaprio’s friendship has become one of the most famous ones in the entertainment industry.

The Quentin Tarantino film marked a Hollywood milestone as the first time these two A-list actors starred in a major project together, and their bromance even became the highlight of the 2020 award-show season.

But this movie isn’t the first time Pitt and DiCaprio have crossed paths. Here’s a look at their friendship through the years: 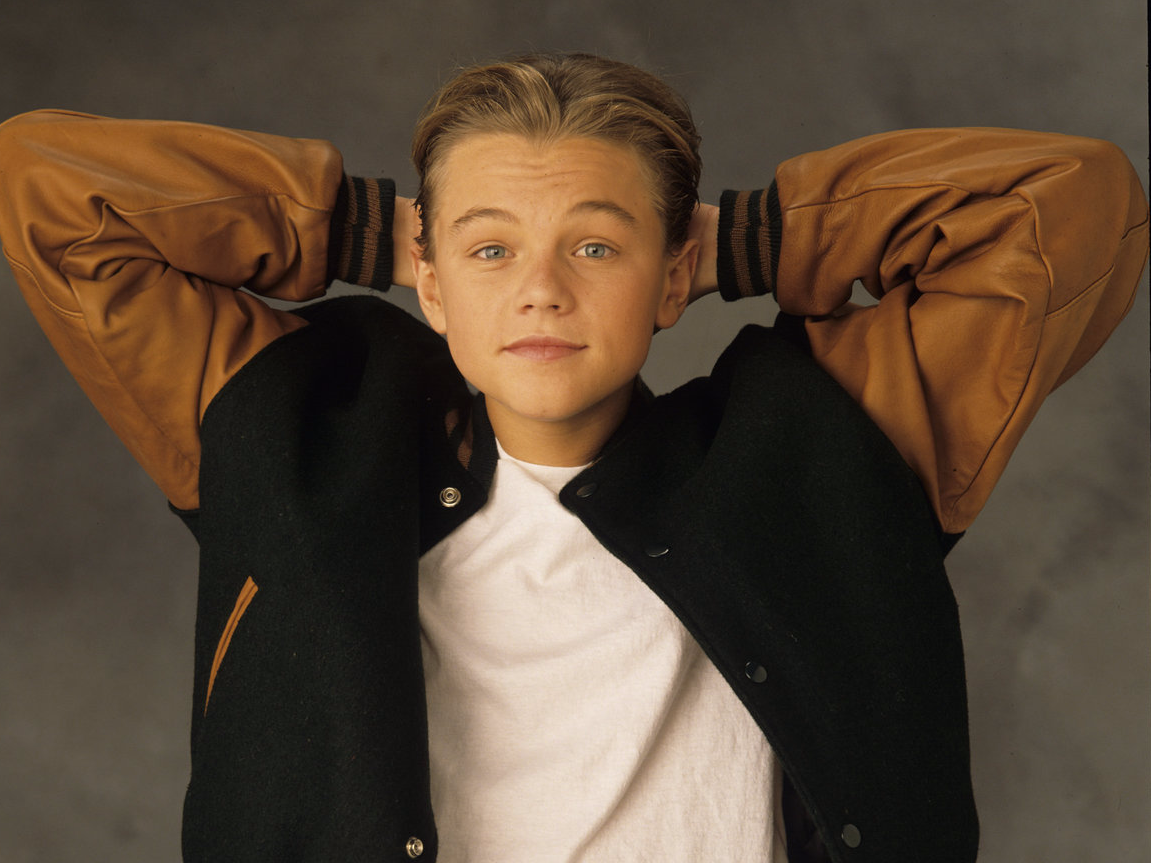 ABCLeonardo DiCaprio was on more episodes of ‘Growing Pains’ than Brad Pitt was.

It may have taken until 2019 for Pitt and DiCaprio to officially star in the same movie together, but they both started their Hollywood careers on the ABC sitcom “Growing Pains.”

During an interview with “Today,” Pitt and DiCaprio even spoke about their shared experience getting their start on the same show, though they weren’t on it at the same time.

1990s: The actors were photographed together at a few different events. 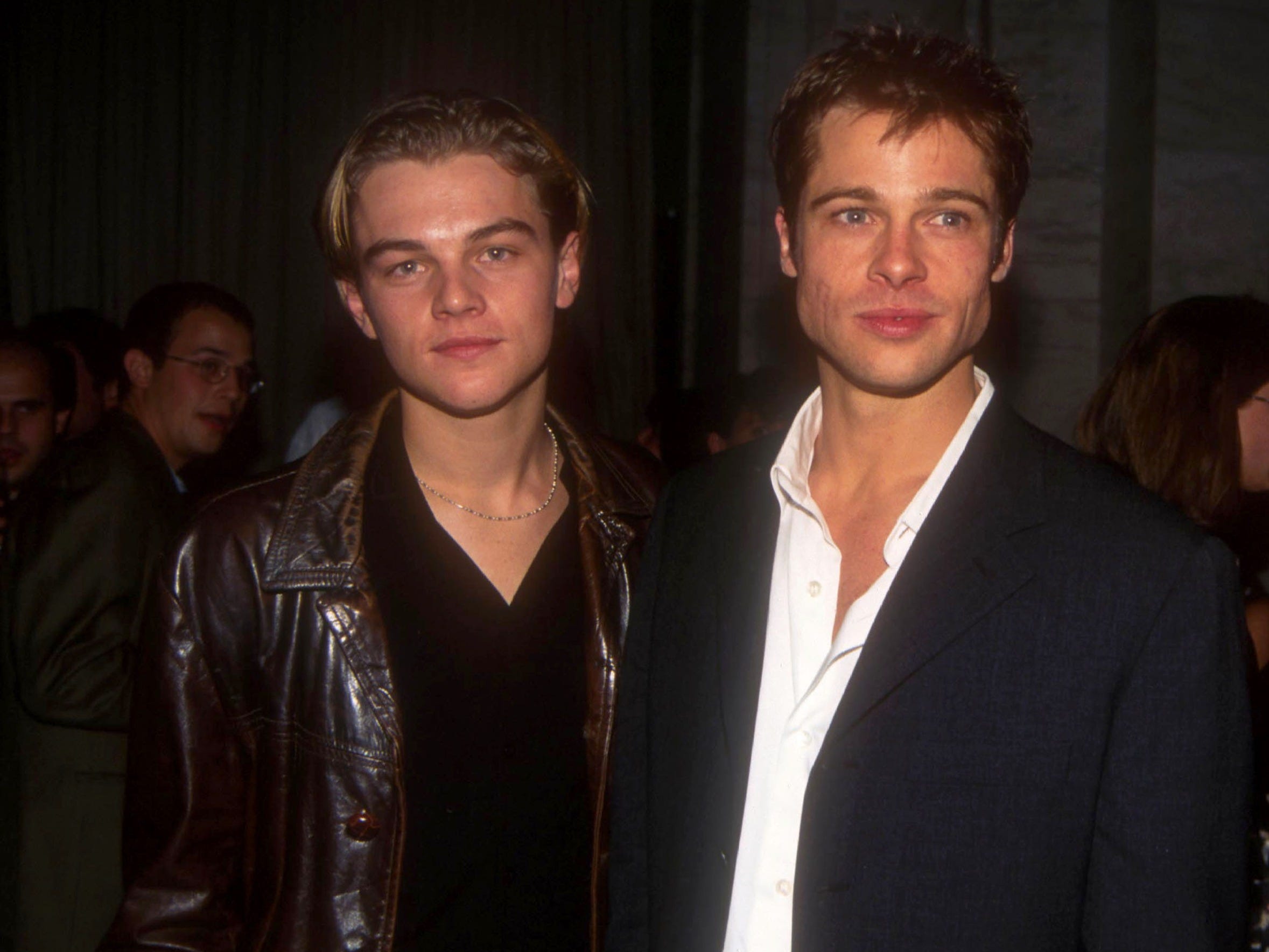 Patrick McMullan/Getty ImagesLeonardo DiCaprio and Brad Pitt at an event on September 15, 1995.

Although it’s unclear exactly when the two actors met, it seems that they have been in the same social circles for years.

In September 1995, the two posed for a photo together at an event in Los Angeles. There are also a few other photos of the pair at events from this decade.

2015: They appeared in a commercial short film together. 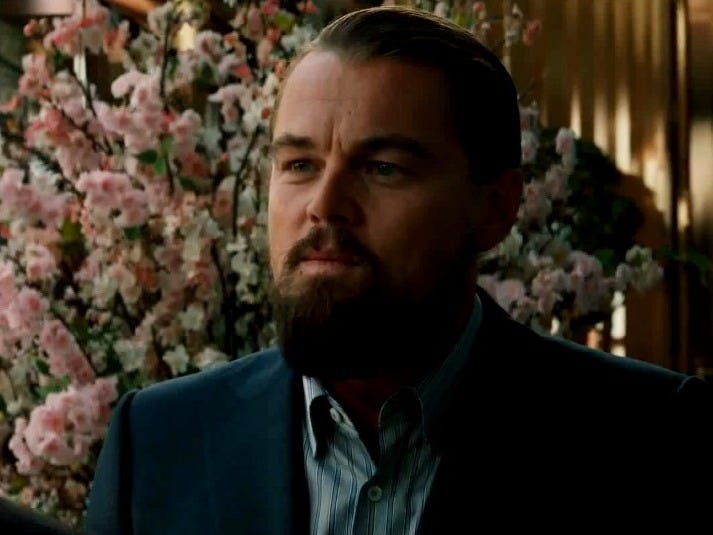 In 2015, both actors appeared in “The Audition,” a commercial short film directed by Martin Scorsese.

The short film was meant to promote the Studio City Macau resort and casino.

In the film, DiCaprio and Robert DeNiro play themselves competing for a role in a Scorsese film. At one point, they see Scorsese meeting with Pitt, so they stop fighting and go to the resort’s spa.

DiCaprio and Pitt didn’t exchange any dialogue during the short film, and they haven’t mentioned that they hung out during the experience.

May 2019: The two raved about each other while speaking to reporters at the Cannes Film Festival. 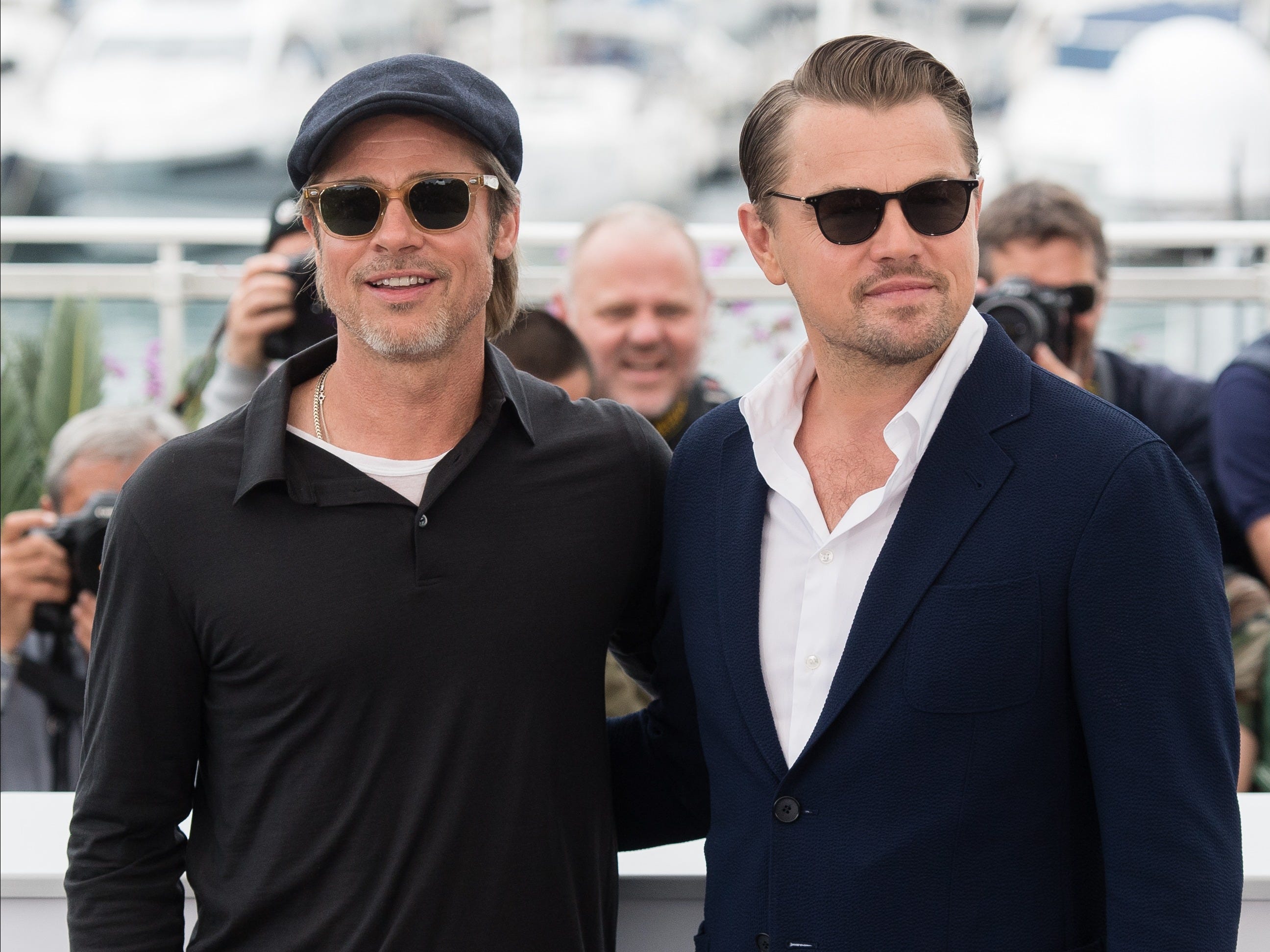 Samir Hussein/WireImage/Getty ImagesBrad Pitt and Leonardo DiCaprio at the 72nd annual Cannes Film Festival on May 22, 2019.

At a press conference in May 2019, Pitt and DiCaprio spoke about what it was like to work together on “Once Upon a Time in Hollywood.”

“I have to say it was incredibly easy – incredibly easy working with Brad,” DiCaprio said. “And I think we together forged, hopefully, a great cinematic bond in a film about our industry together.”

Pitt echoed the sentiment, adding, “It was really great ease and really great fun. It’s that thing of knowing you’ve got the best of the best on the opposite side of the table holding up the scene with you and there’s great relief in that.”

Later that month, in an interview, the two bonded over their shared experiences in Hollywood. 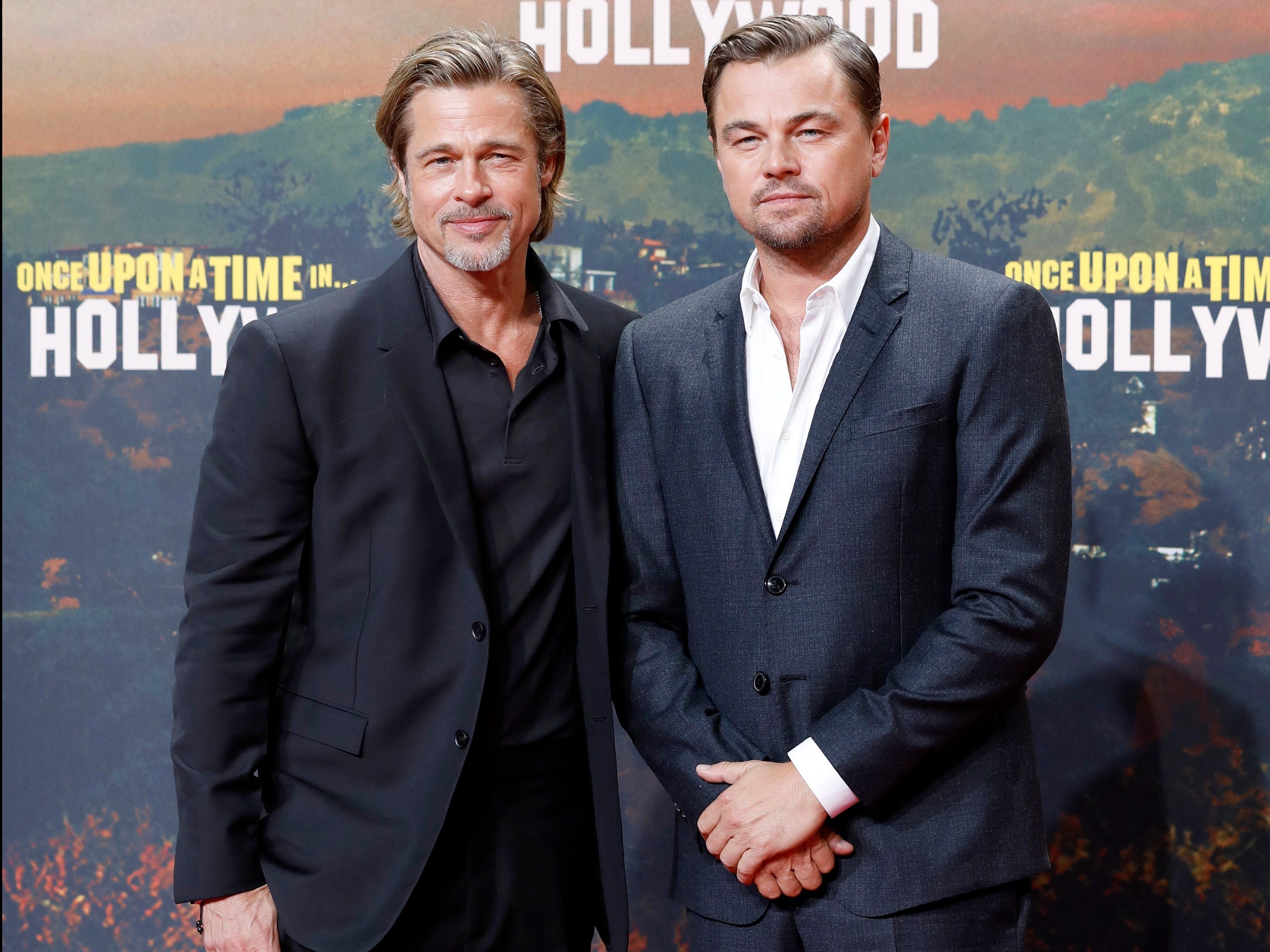 In a 2019 interview with The New York Times, Pitt explained that he and DiCaprio became friends so easily because they have been through so many of the same things.

He also described their friendship as “pretty automatic.”

“We both came on the scene around the same time, we have crossed paths many times, we have the same reference points,” Pitt told the publication. “I’ve always felt that you don’t understand the deal you’re making when suddenly you’re that lone gazelle on the plain and the herd’s gone, so to speak. And, you know, my friend here [he gestures toward DiCaprio] has been the same.”

He explained that it was comforting to have those shared experiences together, and added, “We have mutual respect and I know when an actor elevates a scene, so we carry that respect.”

In the same interview, DiCaprio said the two instantly became friends on the set of “Once Upon a Time in Hollywood.” Andrew Cooper/Columbia PicturesBrad Pitt and Leonardo DiCaprio’s characters have a unique bond in ‘Once Upon a Time in Hollywood.’

In the same New York Times interview, DiCaprio and Pitt were asked if they hung out together when filming began in order to develop a strong real-life friendship like their characters Rick and Cliff have in the film.

“You come to Hollywood and you’re basically isolated and left to your own devices,” DiCaprio said. “[Rick and Cliff] rely on this friendship for everything. We immediately fell into those shoes. We understood that relationship so quickly that on the first day, we were those guys.” In an interview with GQ, Pitt talked a little about their friendship, saying, “We kind of popped at the same time.”

“This is a guy who’s really giving and really goes for it, so you know it’s great fun being able to spar with that calibre of actor,” Pitt added, speaking of DiCaprio. “And he’s just great fun.”

That same month, DiCaprio spoke about how “naturally” his friendship with Pitt came to be. 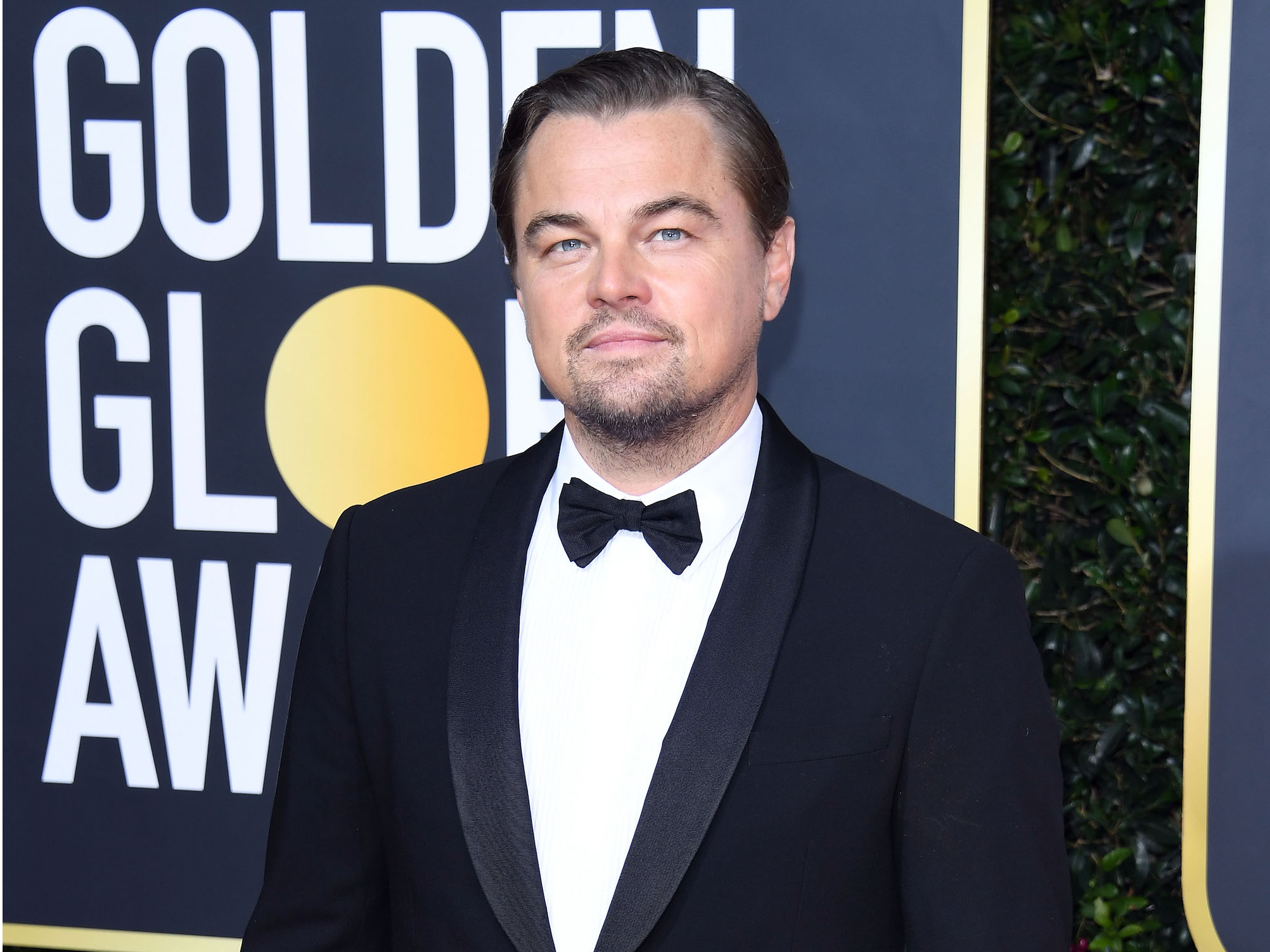 In an interview with Entertainment Tonight, DiCaprio said again that his and Pitt’s friendship “really came naturally.”

He explained, “We understand these dynamics of these professional relationships that also turn into families.”

During an interview, Pitt also teased DiCaprio about a famous “Titanic” movie scene. 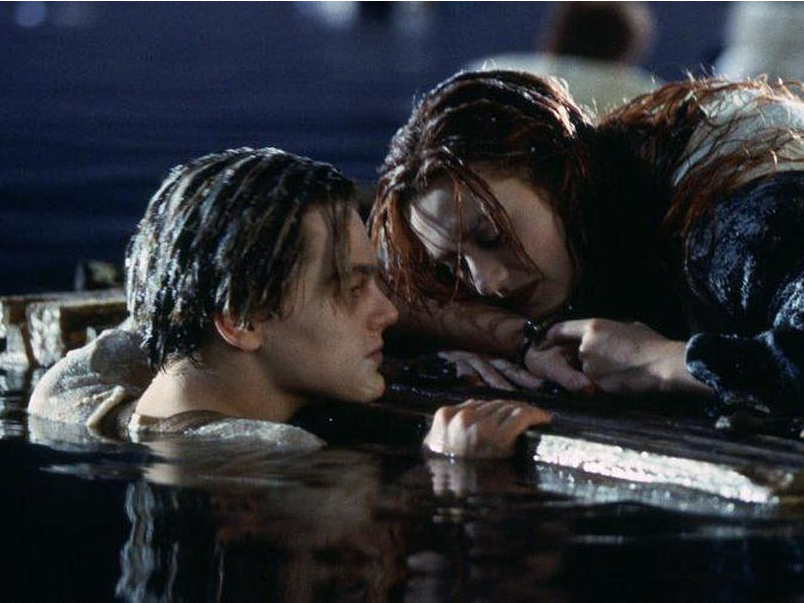 Ever since “Titanic” was released in 1997, viewers have wondered why Jack (DiCaprio) and Rose (Kate Winslet) didn’t just share the floating piece of debris during one of the film’s most famous scenes. Doing so could’ve potentially saved Jack from dying.

Pitt joked about it with DiCaprio during an MTV News interview that showed exactly how friendly the two are with each other.

When DiCaprio was asked about the debate of whether or not Jack and Rose could’ve both fit on the piece of wood, he said “no comment.”

Laughing, Pitt said to DiCaprio, “Could you, could have squeezed in there? You could’ve, couldn’t you?” DiCaprio laughed, and maintained his “no comment” stance.

A source told The Sun that DiCaprio and Pitt make pottery and eat sandwiches together. 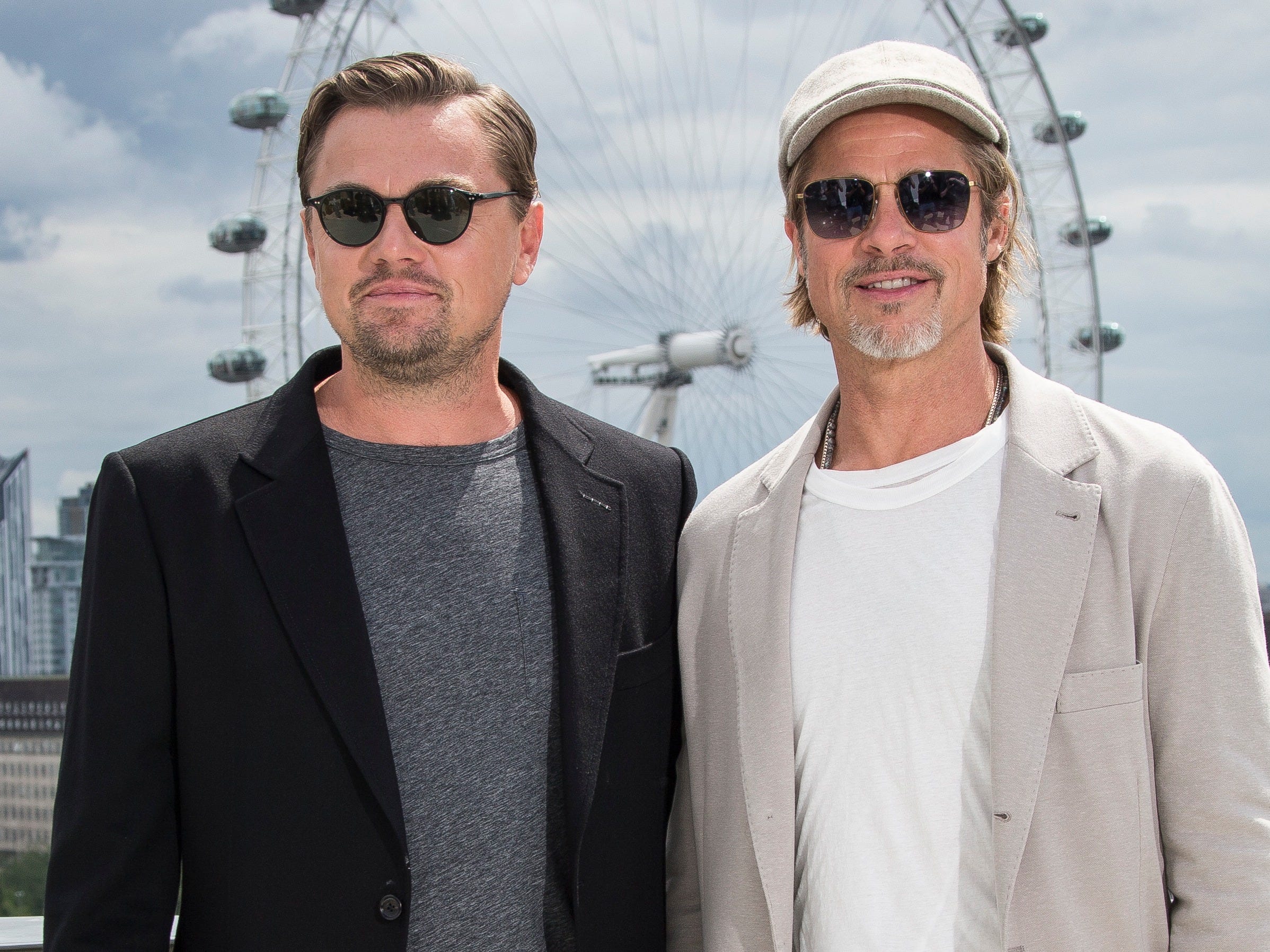 A source close to the pair told The Sun that when Pitt and DiCaprio hang out, they enjoy making pottery together. Pitt has been open about his love of pottery, and he may have gotten DiCaprio into it, too.

“Brad’s got his own sculpting studio at his house, and Leo loves coming over to use it,” the source said. “They sometimes hang out with Brad’s artist pals, but other times it’s just the two of them. Leo brings sandwiches over from their place, Fat Sal’s, and they spend their boys’ nights creating art until the early hours.”

In an interview with Entertainment Tonight that same month, Pitt also made it clear that he admires DiCaprio. He joked, “I’m really happy the restraining order was lifted off of me so we were able to work together.”

“No, he’s a great egg,” the actor continued. “We come from the same circles and I really admire his taste and his choices. I’m really happy this one lined up for us.”

January 5, 2020: In his Golden Globes acceptance speech, Pitt talked about how much he liked working with DiCaprio. 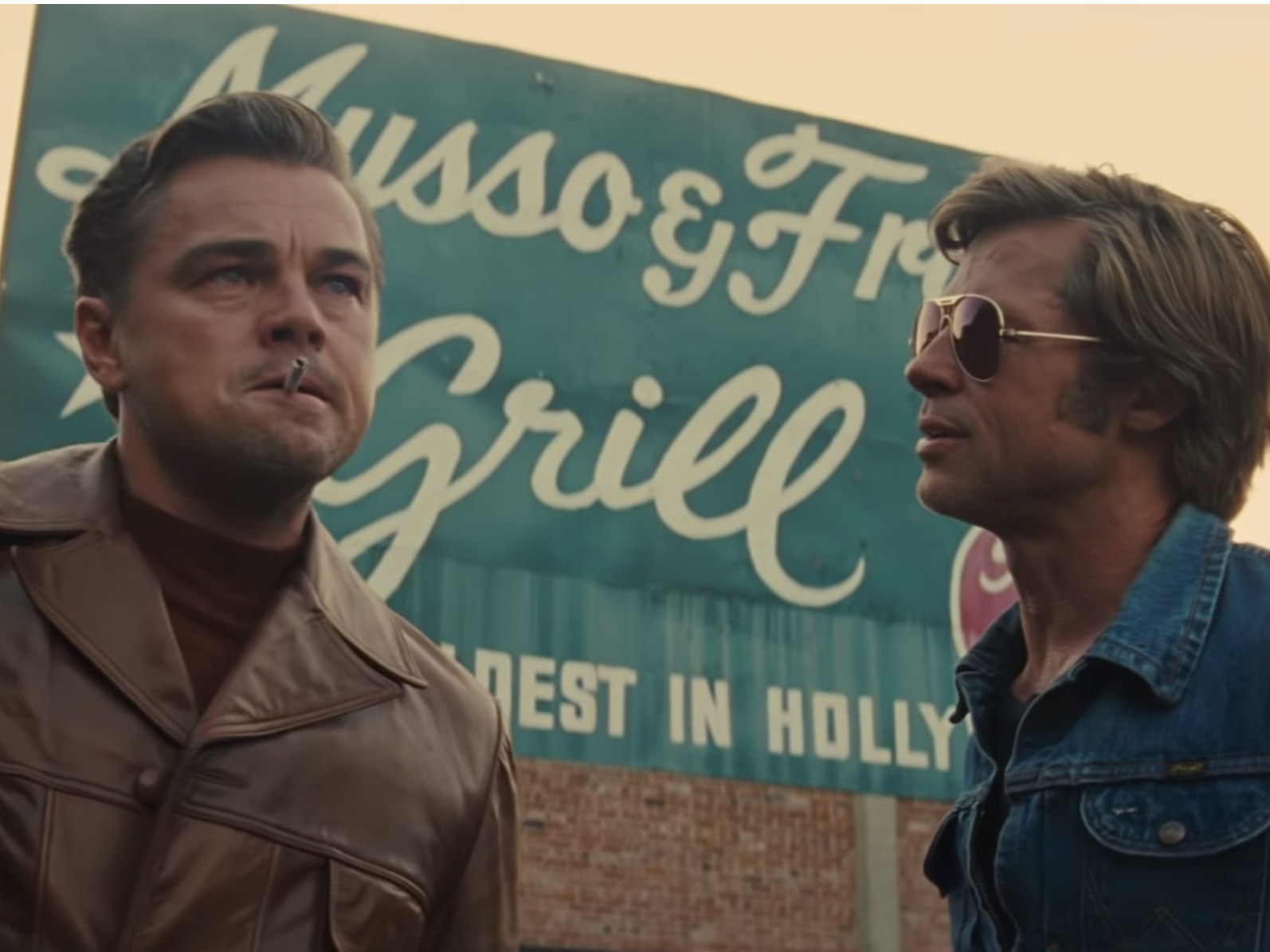 Sony Pictures EntertainmentLeonardo DiCaprio and Brad Pitt in ‘Once Upon a Time in Hollywood.’

After winning the award for best supporting actor in a motion picture, Pitt gave DiCaprio a shout-out during his acceptance speech.

“I have to thank my partner in crime, LDC,” he said. “Before ‘The Revenant,’ I used to watch year after year his costars accept awards and get up and thank him profusely. I know why: He’s an all-star, he’s a gent, and I wouldn’t be here without you, man. I thank you.”

He added another joke about DiCaprio’s role in “Titanic,” saying, “Still… I would have shared the raft.”

Later that month, Pitt shared DiCaprio’s nickname for him. 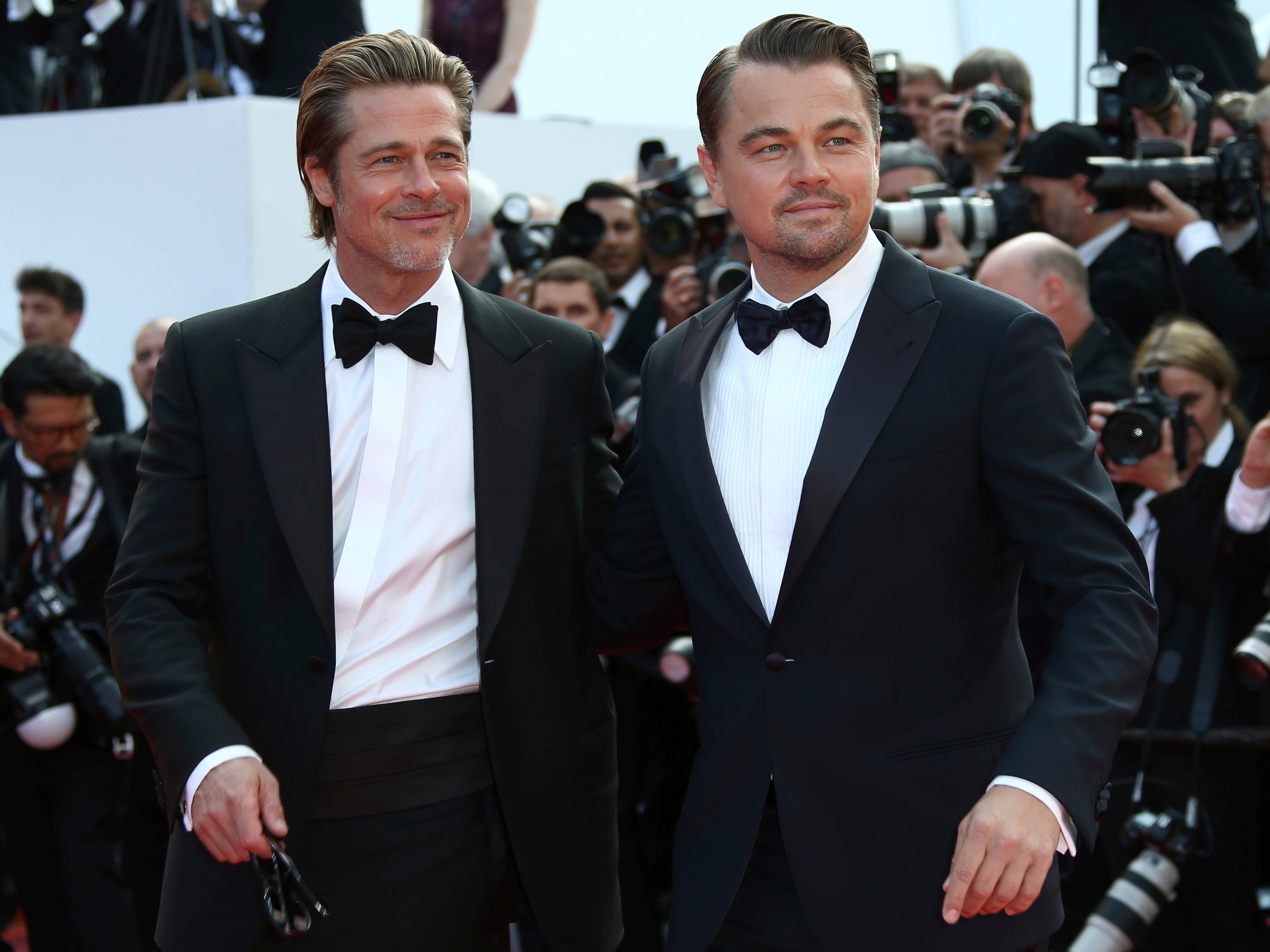 Pitt told People that DiCaprio ” … calls me Lover. It’s a bit confusing, but I roll with it.”

That same month, DiCaprio said that he and Pitt were strangely comfortable together from day one. 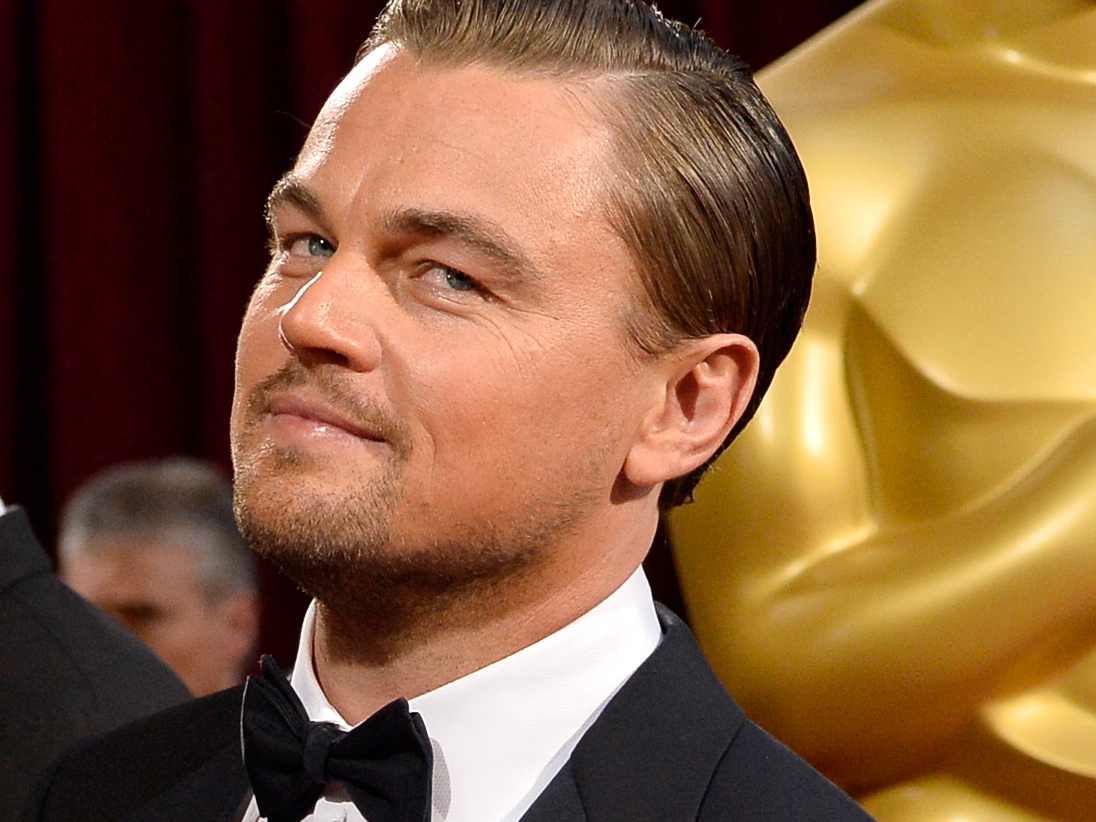 The actors have often spoken about becoming friends immediately, and DiCaprio mentioned it again in an interview with Deadline.

“What was very interesting about working with Brad was this strange inherent comfort and ease that we really both clicked into day one,” he said.

“It didn’t need a lot of prep work,” DiCaprio continued, speaking of his friendship with Pitt. “We talked about the script, and we instinctively knew that dynamic and relationship, and who these guys were to one another.”

February 9, 2020: Pitt also mentioned DiCaprio in his acceptance speech at the Academy Awards. Kevin Winter/Getty ImagesBrad Pitt won the Oscar for best performance by an actor in a leading role.

DiCaprio was nominated for best actor for his performance in “Once Upon a Time in Hollywood” and didn’t win. But that same night, Pitt nabbed the Oscar for best supporting actor for his role in the film.

During his acceptance speech, Pitt said, “Leo, I’ll ride on your coattails any day, man. The view’s fantastic.”

21 times celebrities opened up about their divorces