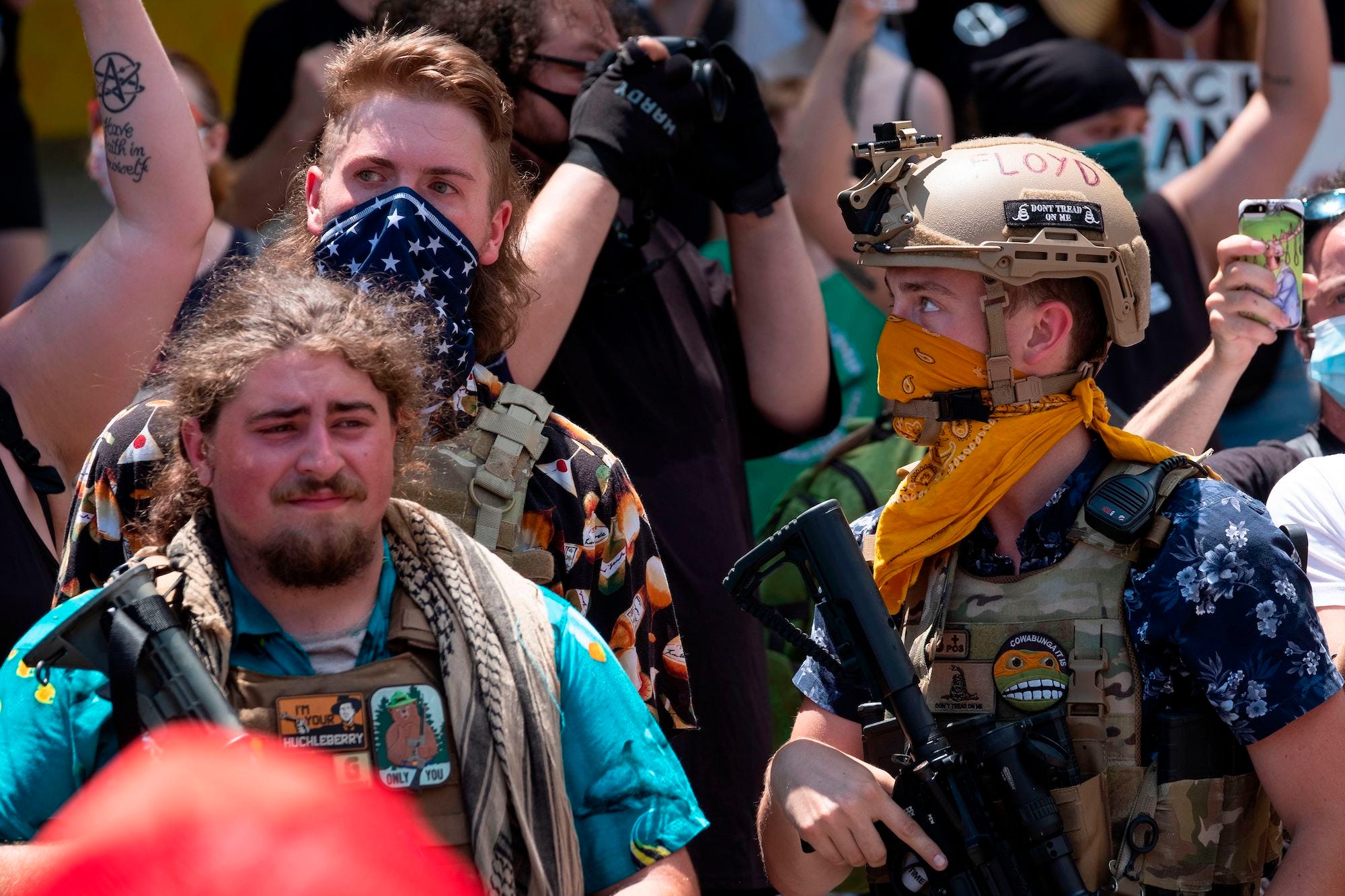 JEFF DEAN/AFP via Getty ImagesMembers of the Boogaloo Movement stand in front of the Ohio Statehouse during a right-wing protest ‘Stand For America Against Terrorists and Tyrants’ at State Capitol on July 18, 2020 in Columbus, Ohio.

The FBI last month arrested Timothy Watson, of West Virginia, on charges that he operated a website which illegally sold 3D- printed machine gun parts under the guise of mundane household items.

Watson’s website,”portablewallhanger.com,” has been a go-to shop for the Boogaloo Bois movement, a far-right extremist organisation who’s members have been responsible for the killings of several law enforcement officials, according to the FBI.

Its members have also been charged on crimes to incite violence during the George Floyd protests this year, according to the FBI affidavit, which was signed on October 30.

Boogaloo followers believe that they are preparing for a second American Civil War, which they call “the Boogaloo.” The loosely organised movement formed online and consists of pro-gun, anti-government groups.

The FBI says that Watson, who was arrested on November 3, sold about 600 of the plastic devices in 46 states.

The devices look like wall hooks to be used to hang coats or towels, but when you remove a small piece, they function as “drop-in auto sears” that can transform an AR-15 to an illegal fully automatic machine gun, according to the complaint viewed by Insider.

Several of Watson’s customers were high-profile members of the Boogaloo movement who have been charged with murder and terrorism.

Steven Carrillo, a US airman who was charged with killing a federal service officer at an Oakland, California, courthouse in May, purchased devices from the site in January, according to the affidavit.

The FBI also said that a cooperating defendant in Minnesota â€” a self-professed Boogaloo member who was arrested for attempting provide materials to a terrorist organisation â€” told investigators that he had learned about portablewallhanger.com from advertising on Facebook Boogaloo groups, the FBI said.

The FBI had also learned that the site had donated 10% of all “Portable Wall Hanger” proceeds for March 2020 to a GoFundMe campaign in honour of Duncan Lemp, a Maryland man who was killed by police during a no-knock raid in March. Police said that Lemp was storing illegally owned weapons. Lemp has since been hailed as a martyr of the Boogaloo movement. 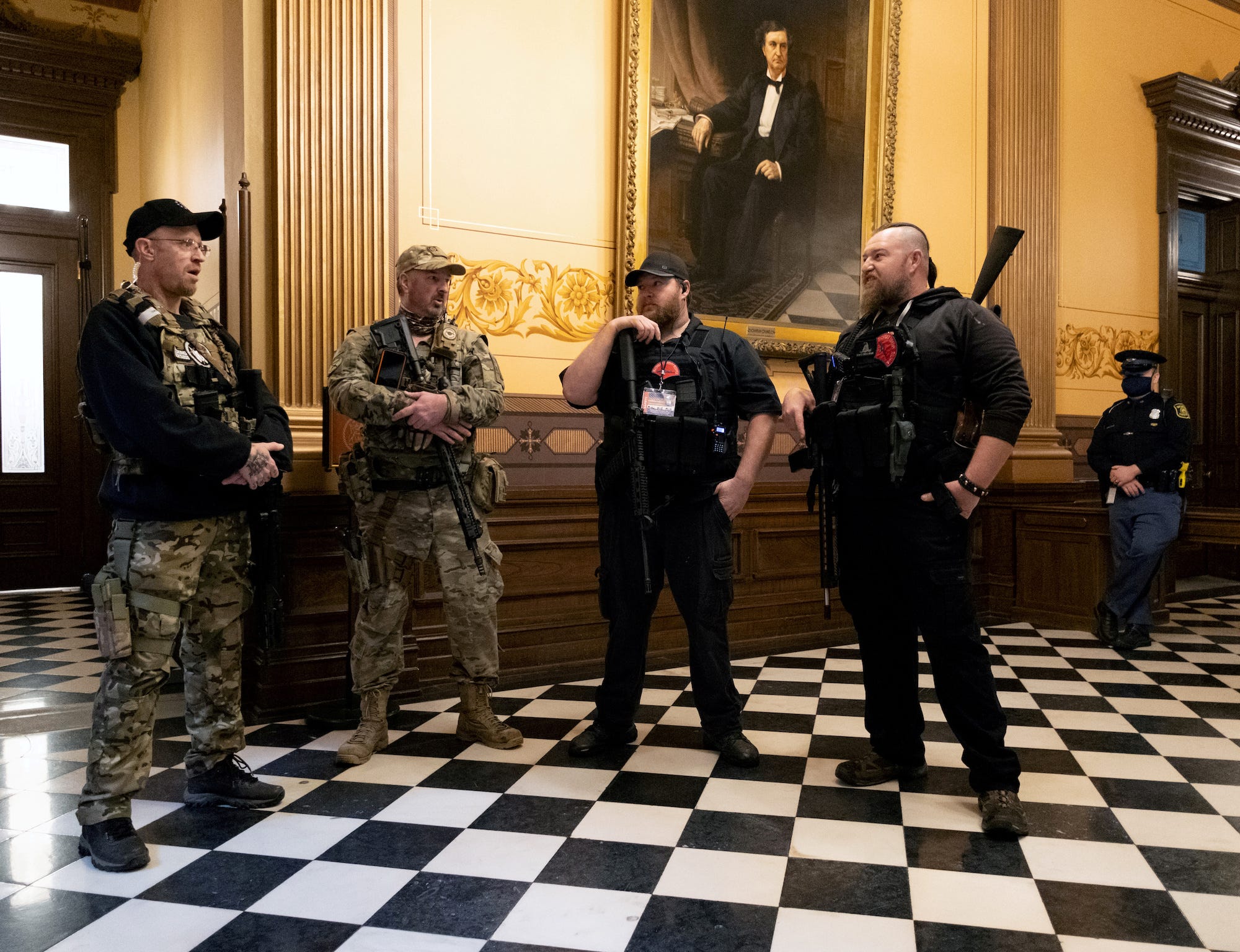 Seth Herald/ReutersMembers of a militia group, including Michael John Null and Willam Grant Null (R) who were charged October 8, 2020 for their involvement in a plot to kidnap the Michigan governor, attack the state capitol building and incite violence, stand near the doors to the chamber in the capitol building before the vote on the extension of Governor Gretchen Whitmer’s emergency declaration/stay-at-home order due to the coronavirus disease (COVID-19) outbreak, in Lansing, Michigan, U.S. April 30, 2020

Watson tried to be subtle in his communication with buyers

The FBI obtained social media and email exchanges by Watson with his customers. In them, he attempted to talk in code when referring to his wall hangers, but not all of his customers succeeded at subtlety.

One Instagram poster with the username “Duncan Socrates Lemp” wrote online that the wall hooks “only work in armalite Walls,” according to the court documents. Armalite is an AR-15 manufacturer.

Another person who went by “booglordinc” commented that he hoped the Red Coat Hangers were “sturdy.”

“I don’t mind seeing redcoats lying on the floor, but prefer to leave em properly hanging #twitchygurglythings,” the user wrote.

The term “redcoat” is used to describe enemies of the Boogaloo movement in their fantasy revolution.

Watson is charged with conspiracy to commit offence against United States, illegal possession and transfer of a machine gun, and unlawfully engaging in the business of manufacturing firearms.

A message left by Insider for Watson’s attorney Shawn McDermott was not immediately returned.