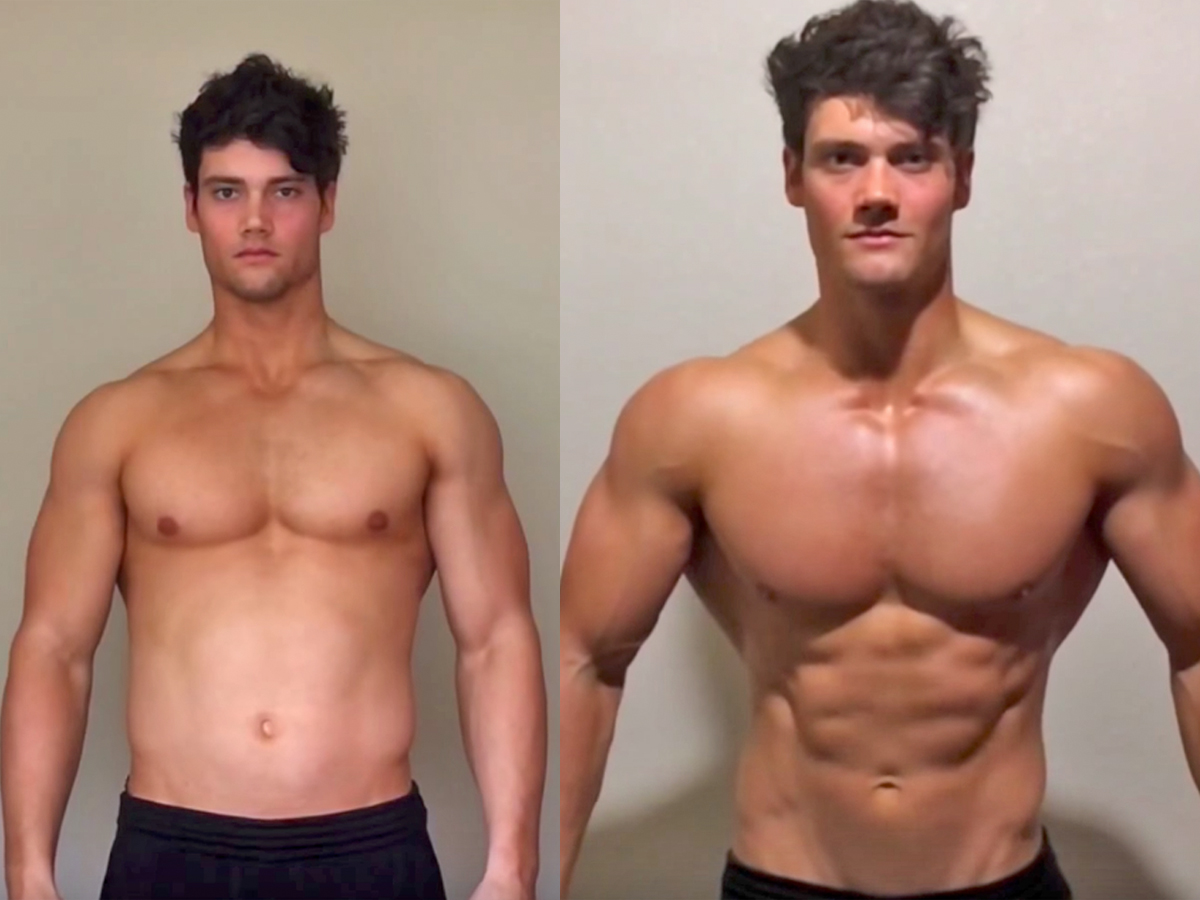 Connor Murphy is a bodybuilder and fitness influencer who has over two million YouTube subscribers. Almost all of his Instagram posts emphasise his muscles. 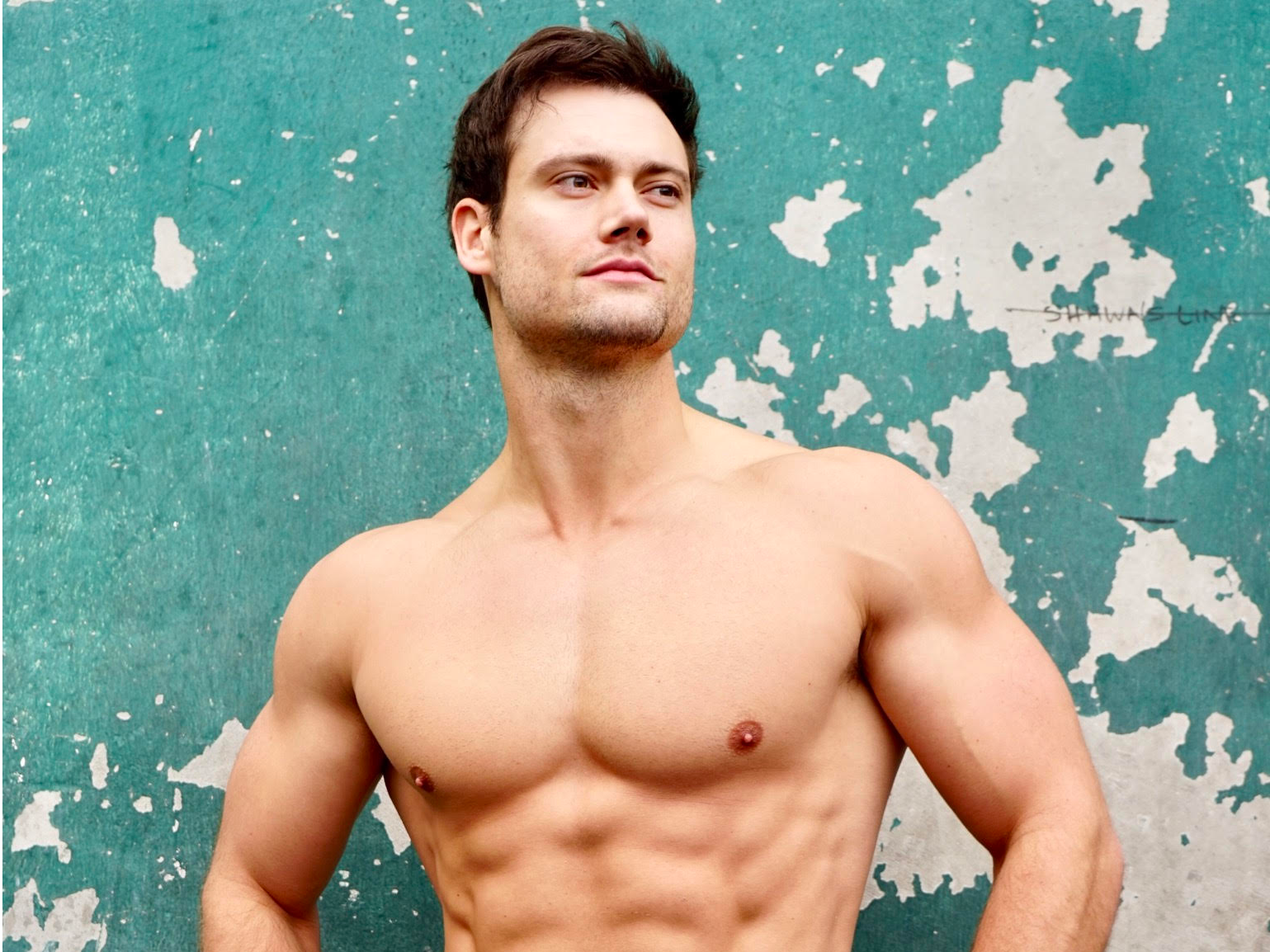 A quick look at Murphy’s Instagram page will make you think he can’t take a bad photo thanks to his toned physique. But Murphy told Insider there’s a lot that goes into making sure he looks muscular in his pictures.

When he started developing his social-media presence in late 2015, he learned a myriad of tricks that could make him look much more muscular.

“I realised there are a lot of things that make my body look drastically different” in Instagram photos, he said. 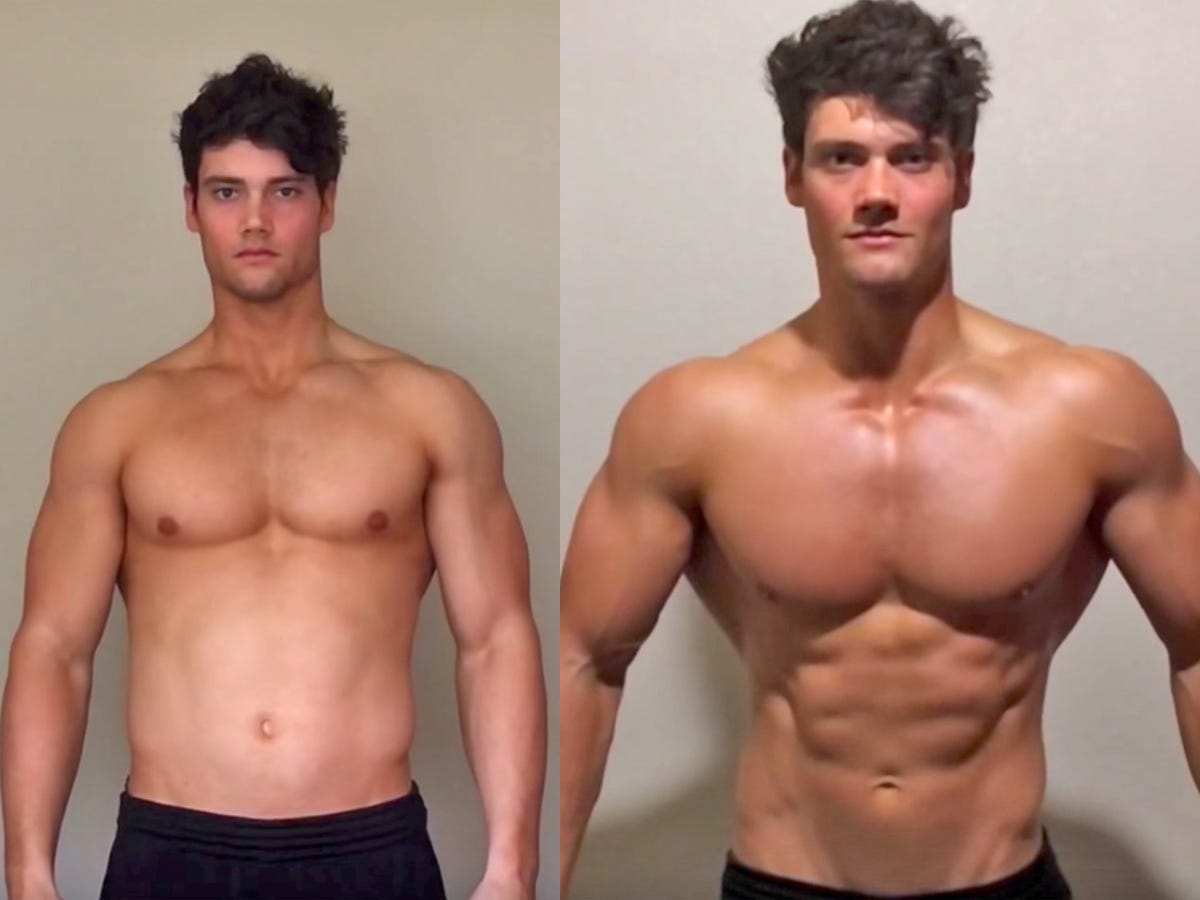 Connor Murphy/YouTubeMurphy wanted to be more transparent about how he made his muscles look their best.

He posted the video in part because he thought it was a fun idea video people would enjoy watching, but also because he wanted to be more transparent with his followers.

“The fitness industry is known to be super, super fake,” he told Insider. “Everyone’s, like, Photoshopping their pictures, everyone’s lying about being on performance-enhancing drugs and stuff like that.”

“Most influencers aren’t gonna wanna show you the before photos because they don’t look good,” he added.

In the video, he demonstrated how things like lighting and camera angles can impact how your photos look. “Lighting is the most important from a bodybuilding standpoint,” Murphy said. 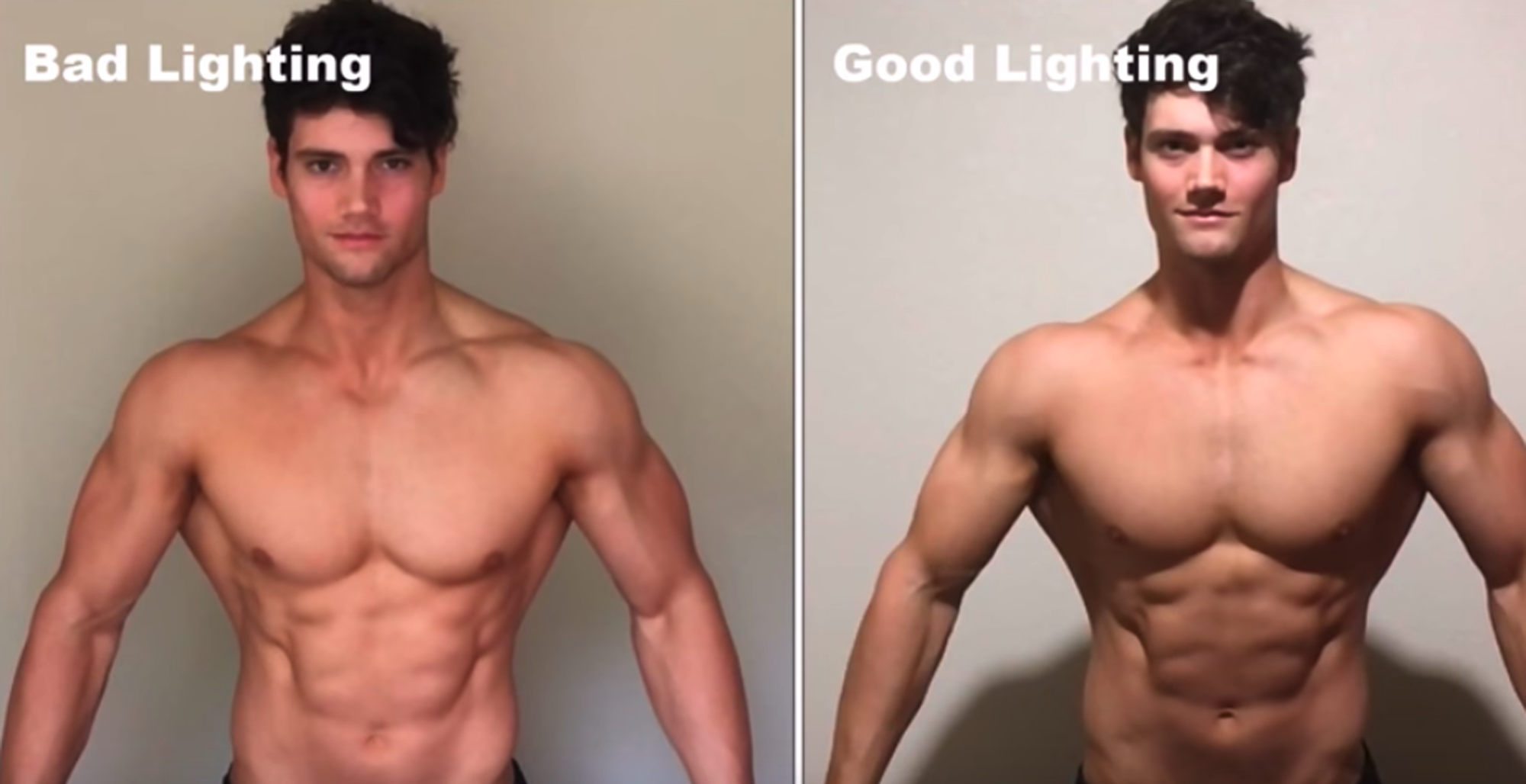 “Lighting is everything,” he said. “It can be the difference between you looking like you hardly lift and like you’re a professional physique competitor,” as a darker setting can make it difficult to see muscle lines.

Murphy’s biggest piece of advice to people trying to optimise their muscles in photos is to always face towards the sun in your photos.

“Never, ever face away from the sun in a photo,” he said. “You’re going to see no cuts in your body” if the sun is behind you.

Titling your body towards the camera can also impact your appearance, according to Murphy. “Whatever body you’re trying to make look bigger, lean it closer to the camera,” he said. 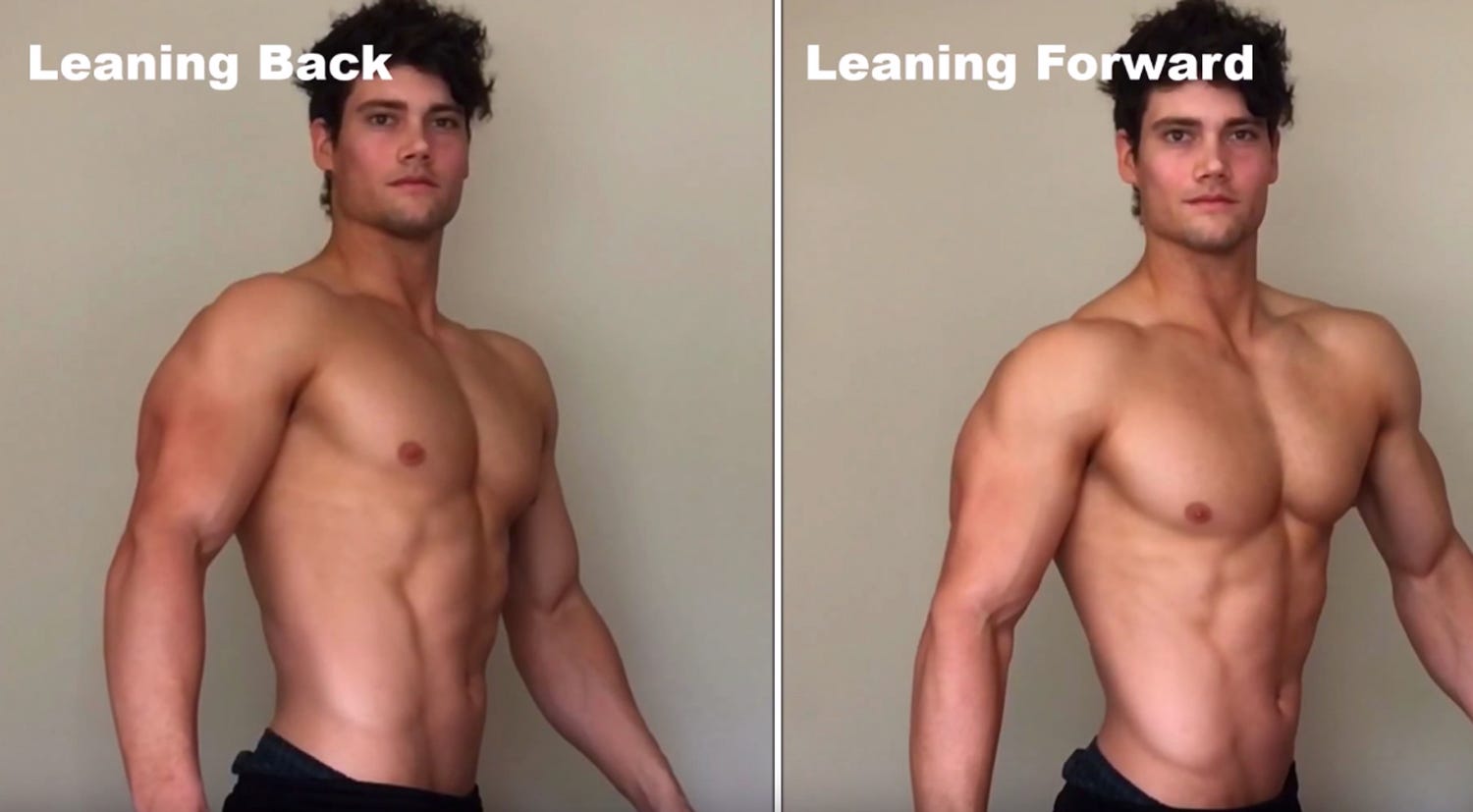 Connor Murphy/YouTubeLeaning towards the camera can make parts of your body look smaller.

“You’re making the top half of your body closer to the camera than your lower half,” Murphy said, explaining why leaning forward is an effective pose.

Murphy has also found that positioning the camera at a higher angle can make his muscles look bigger, especially if he’s trying to emphasise his upper body. 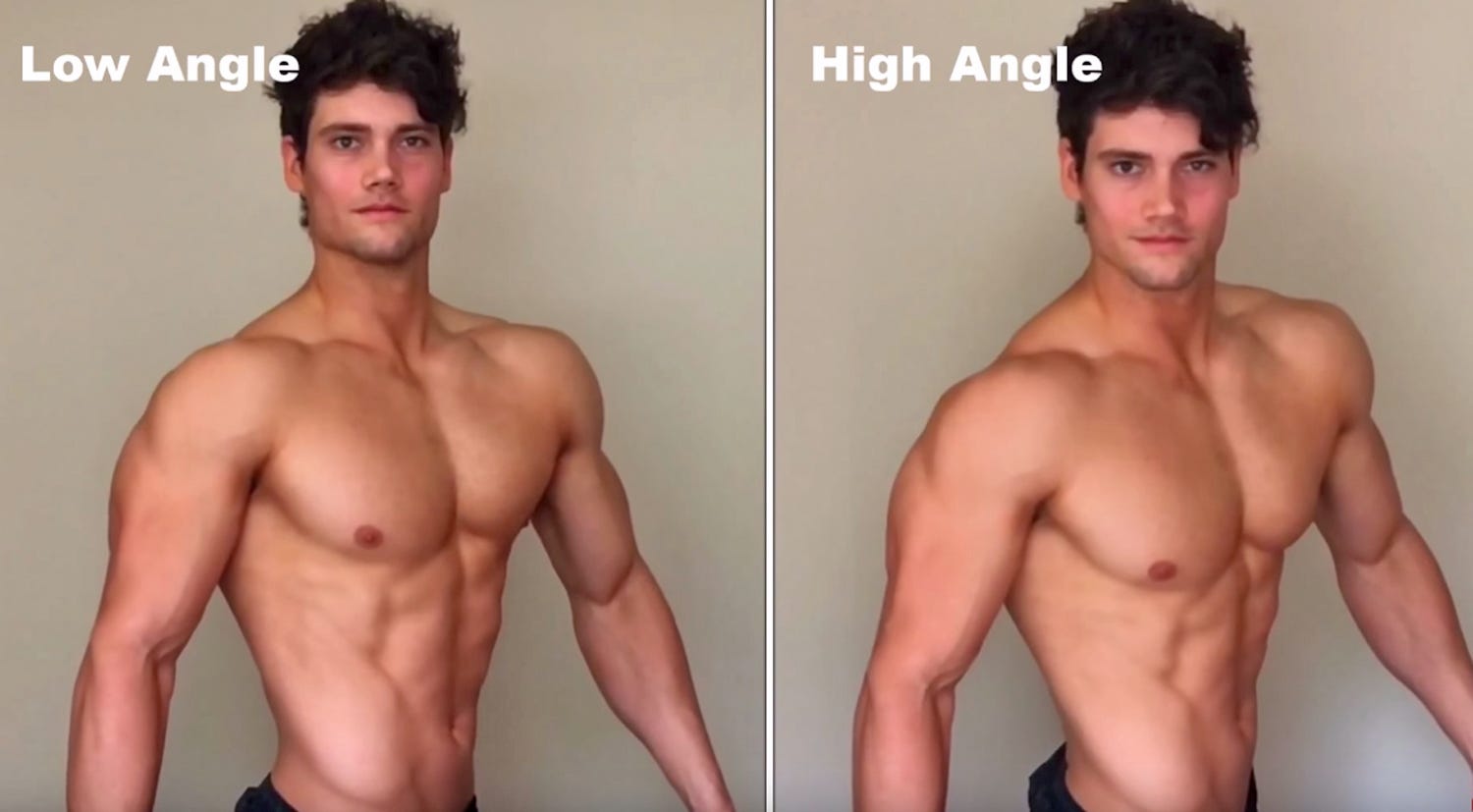 Connor Murphy/YouTubeThe angle of the camera itself can also impact how you look in photos.

But Murphy also noted that if you’re trying to emphasise your gluteus muscles, you might actually tilt the lower half of your body forward and turn slightly towards the side.

It depends on the body part you want to emphasise.

Flexing for a photo makes muscles more defined. “Your abs are not going to be visible unless you flex,” he says in the video. 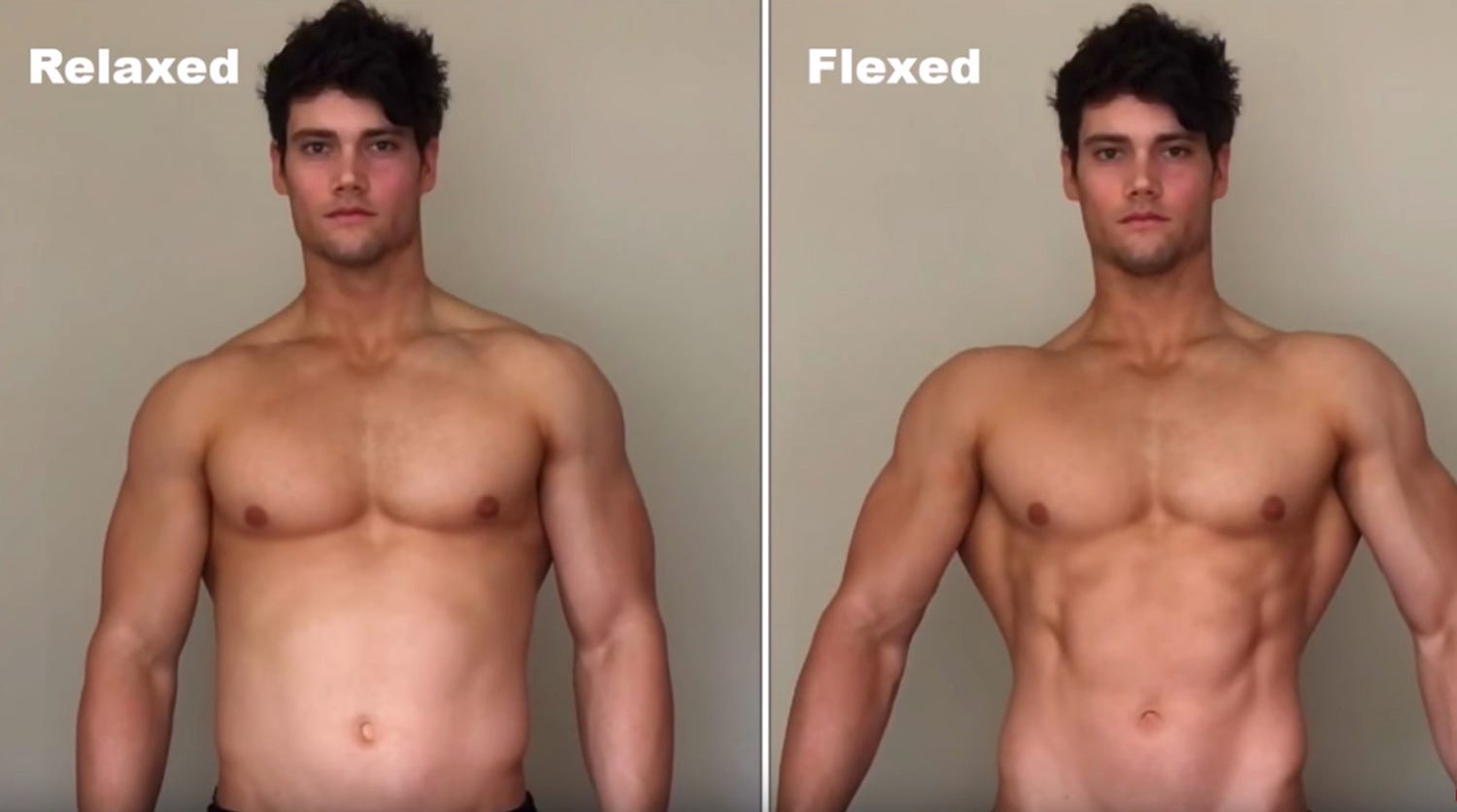 Murphy told Insider that shaving your body hair can make your muscles look more visible too.

“It makes you not look as defined because the hair is kind of covering it up,” he said of body hair.

Murphy said most bodybuilders tan themselves to make their muscles look more defined. 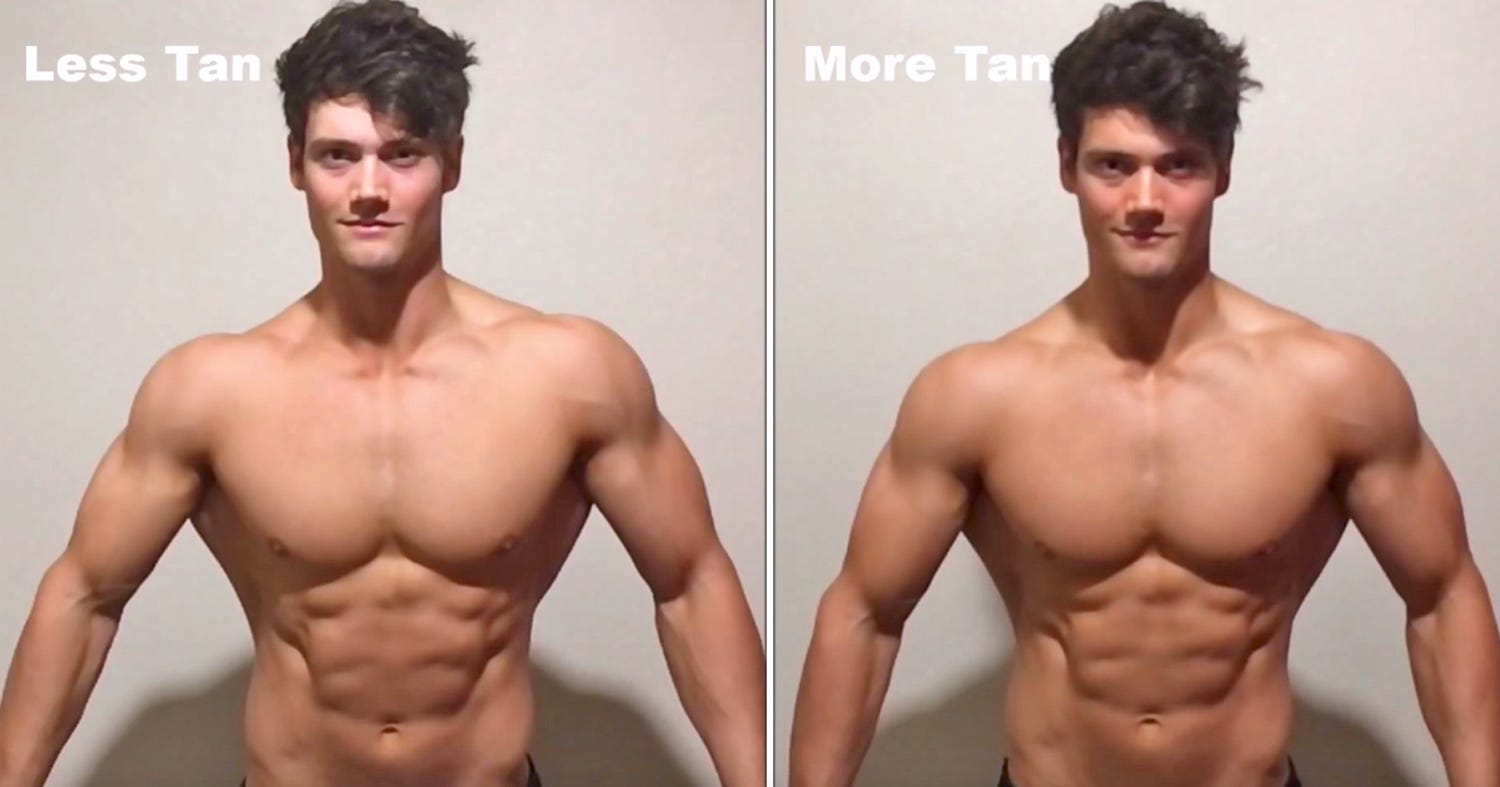 “When it comes to bodybuilding, it actually makes the shadows a little darker,” Murphy said of tanning.

“Especially if you’re under harsh lighting,” he added. “So that’s why on stage bodybuilders really have to tan, because when those lights are shining at you, if you’re not darker, you’re going to appear very washed out.”

“The harsher lighting that you’re under, the tanner you’re going to need to be to have any definition at all.”

Murphy makes sure to get his blood pumping before posing for a photo. 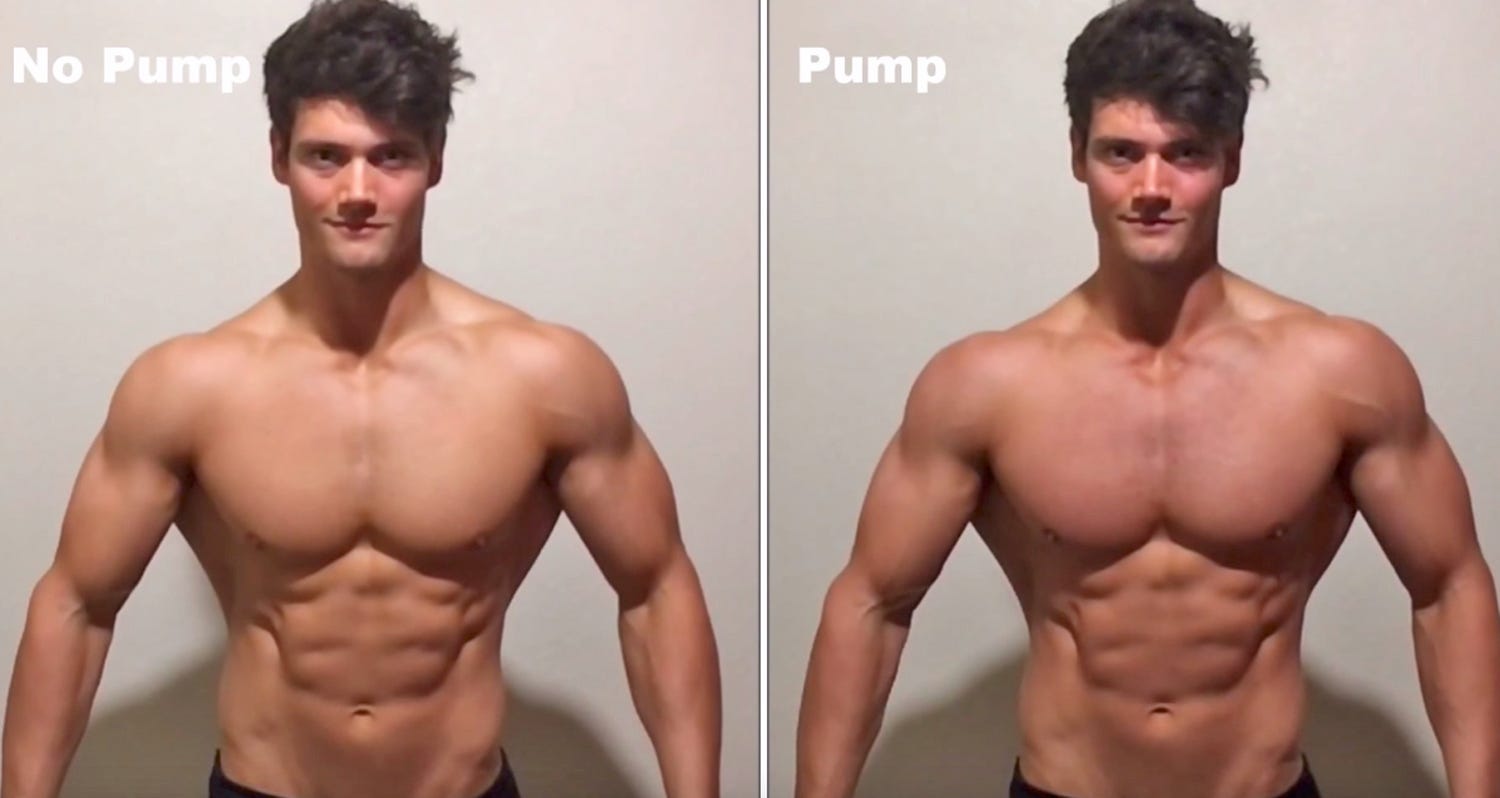 In addition to swelling the muscles, getting your blood moving can make your skin flush, which in turn makes them look larger as well. Murphy recommended doing push-ups to get your blood pumping in his video.

Murphy says he applies oil to his body as the shine it creates makes his muscles seem larger. 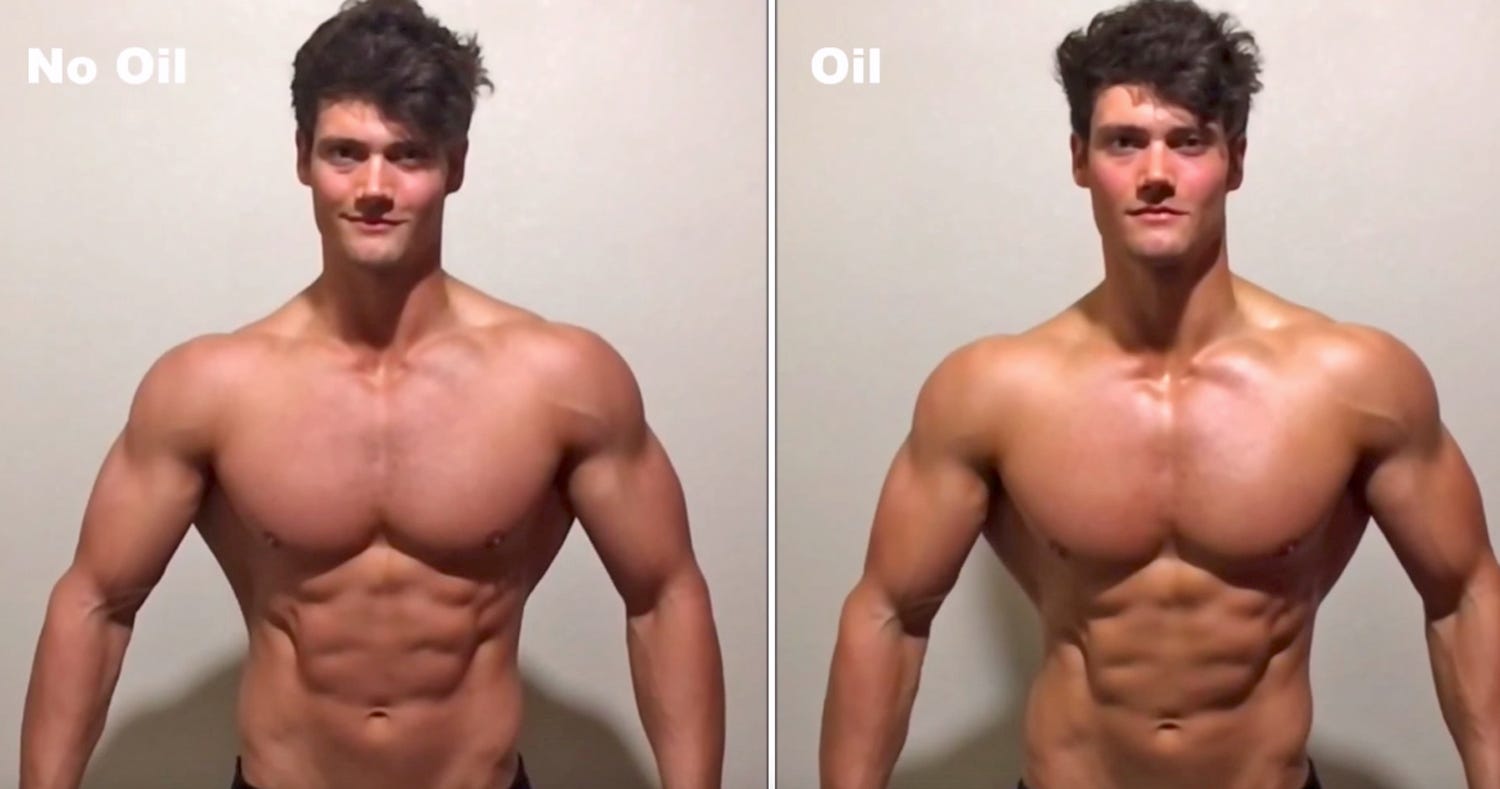 He recommends spray-on cooking oil in the video, as it allows you to disperse the oil evenly.

Murphy thinks fitness influencers can give people unrealistic expectations of what they should look like. 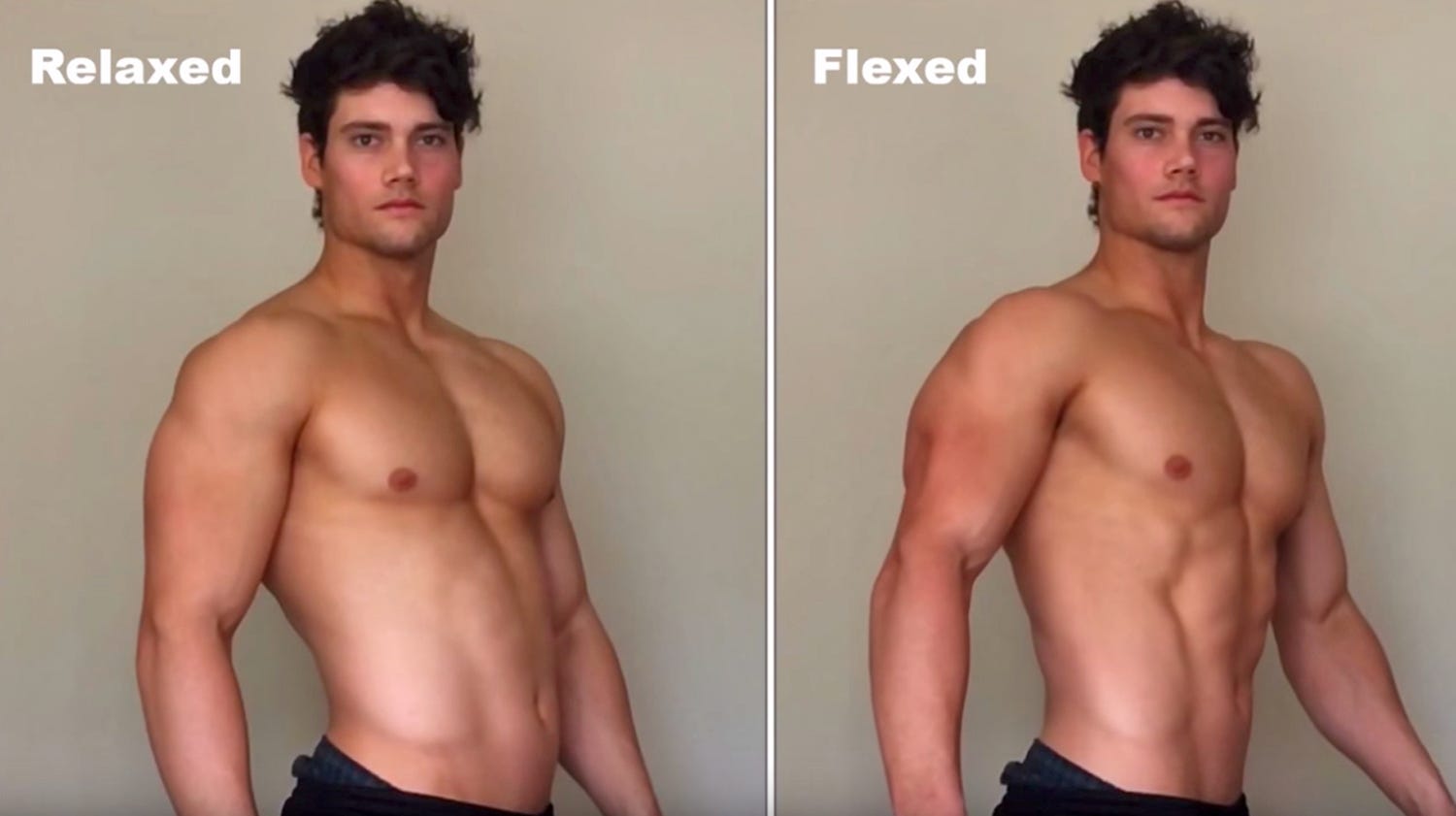 Murphy isn’t the only influencer to call out the industry for setting unattainable standards for followers. Fitness star Sia Cooper criticised highly-edited photos in 2018.

“It’s bad for the followers if they have these unrealistic expectations that can’t be met because they don’t understand that what they’re trying to achieve isn’t even real,” he said. 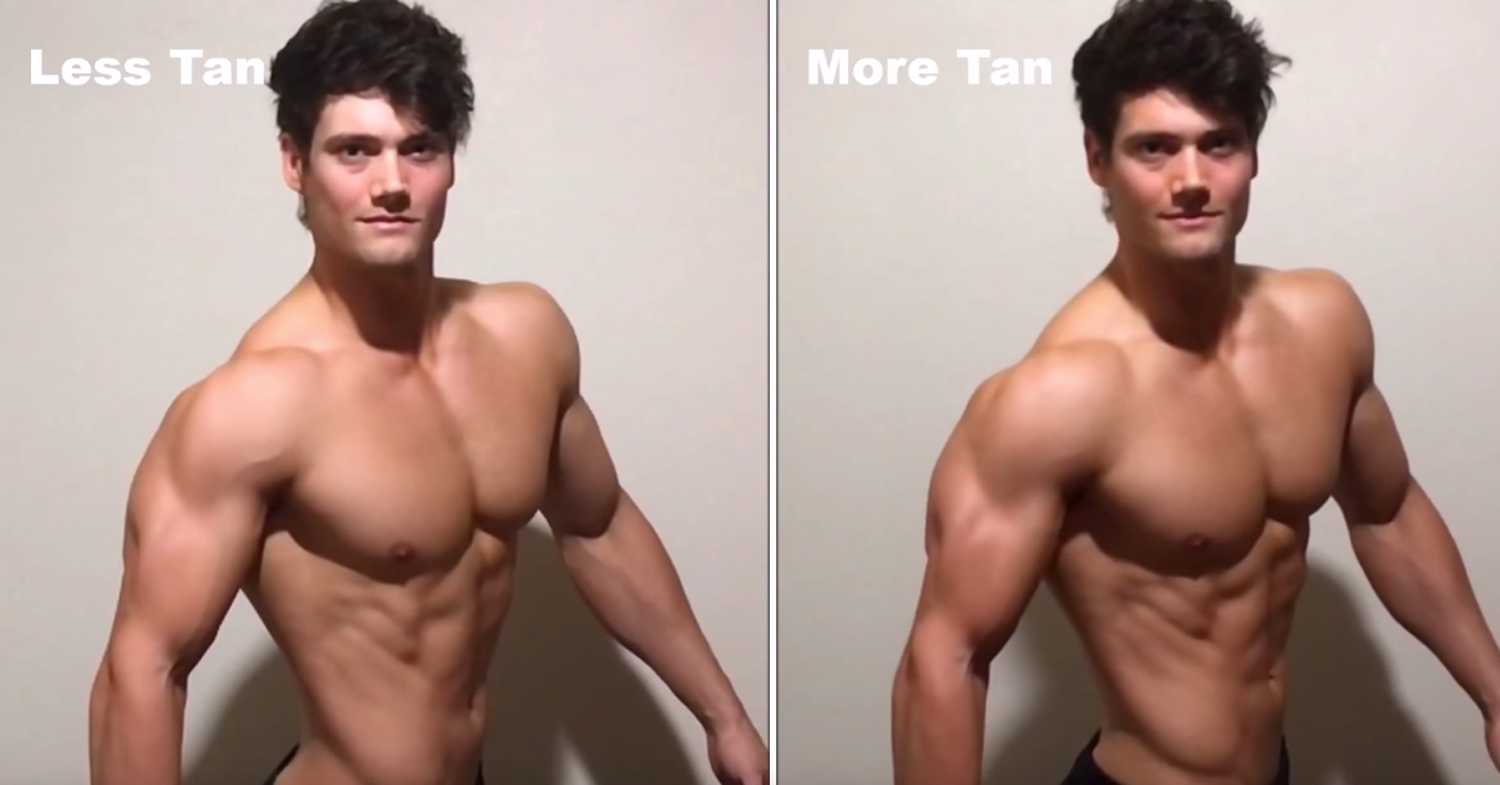 “A lot of these people are selling products, and the followers are gonna be buying products thinking they can look like this person,” he pointed out.

“It’s very detrimental to the consumer, and the more transparent people can be, the better.”

You can see more of Connor’s video’s on his YouTube page.