One of boxing's most powerful executives says he is open to selling Top Rank, and 3 heavyweight companies have talked to him about buying 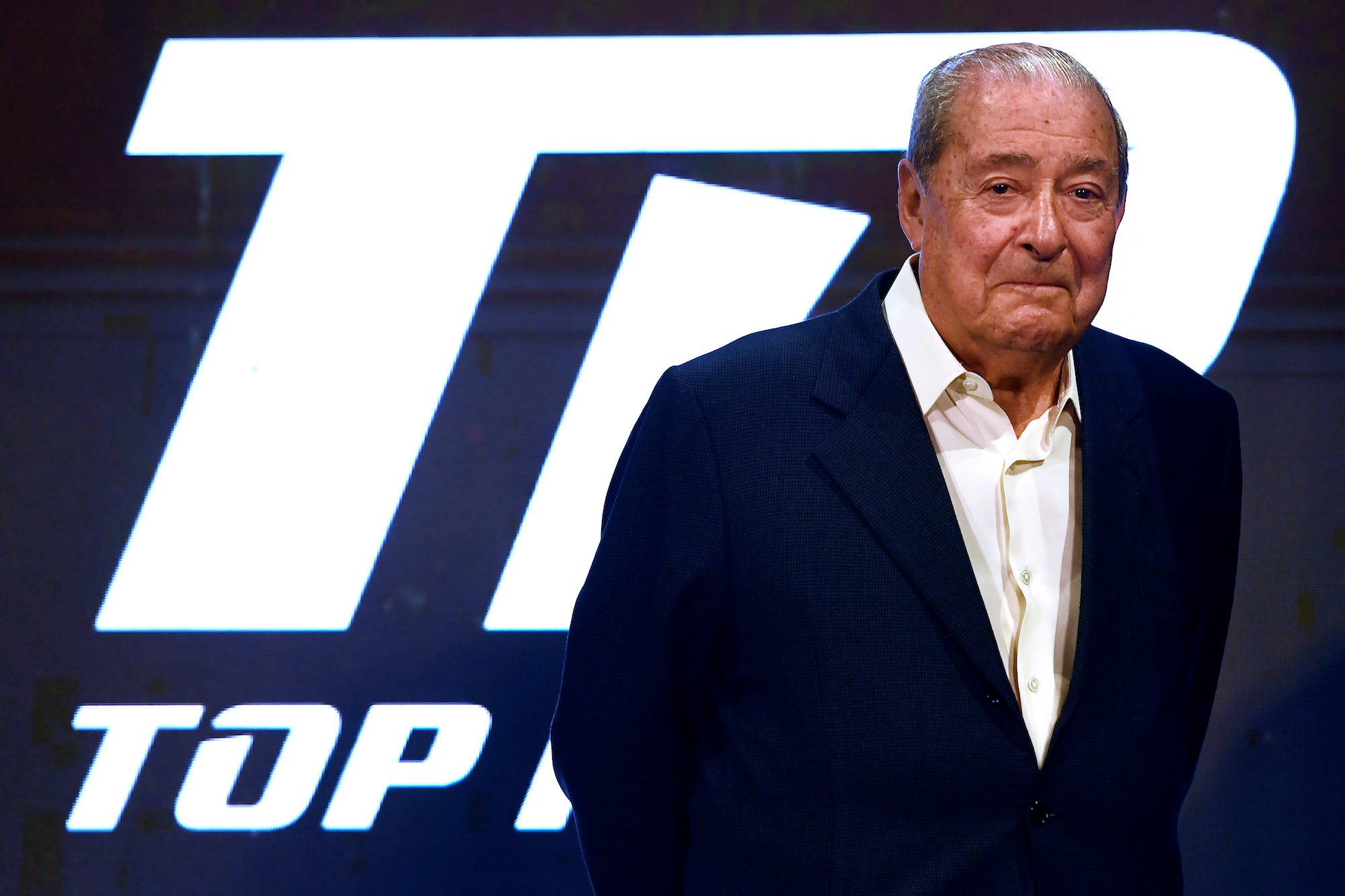 LAS VEGAS – One of boxing’s most powerful men, the 88-year-old promoter Bob Arum, has told Business Insider that he has had discussions about selling his historic fight firm Top Rank.

Should a sale materialise, it would be the most high-profile acquisition in combat sports, if not all sports, since the mixed martial arts (MMA) firm UFC was sold for $US4.025 billion deal in 2016.

“Anything is for sale,” Arum told Business Insider at his office on the second floor of Top Rank HQ, which is a few miles south of the Las Vegas strip.

Top Rank HQ is inside a large building. The company name is embedded in marble as you walk through the entrance. At the reception desk, you can see the company’s fight library archived in chronological order through the glass. It is inside a fireproof room to protect the 10,000 fights which Top Rank owns and digitised for prosperity.

Arum’s office is upstairs. He has a Louis Vuitton heavy bag weighted to the floor, and Louis Vuitton gloves are inside an open cabinet. He told us that Karl Lagerfield designed the punching bag – it is one of five in existence. 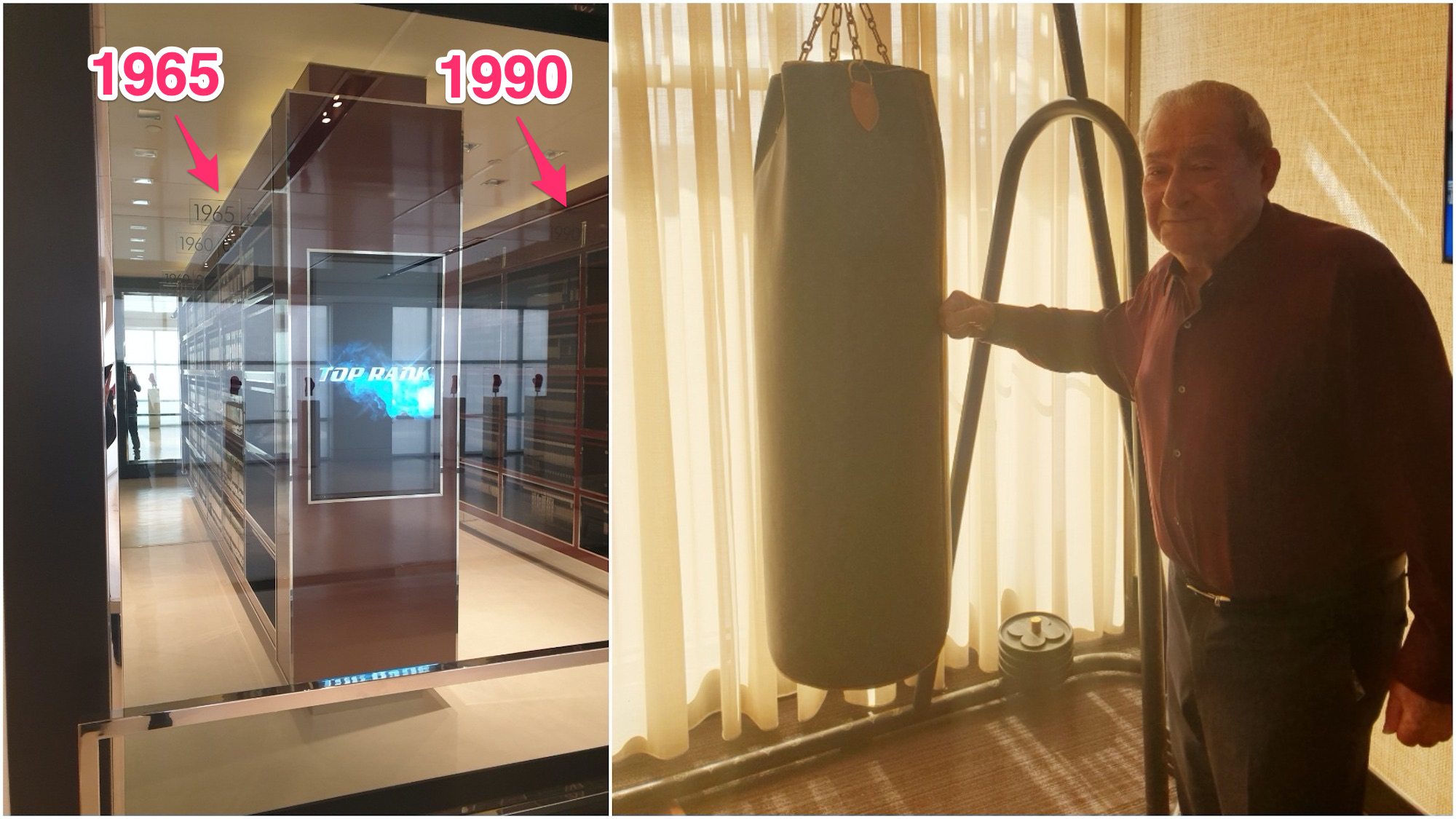 This is what is available to buy, for the right price:

This is who has been discussing a deal, according to Arum:

Arum is seemingly courting a similar deal to the one which saw UFC sold to WME-IMG, now known as Endeavour, four years ago. Dana White remains at the forefront of the UFC, while many people with key positions before the sale, continue to fulfil prominent roles for the company today.

Top Rank, meanwhile, is a family business. Arum may be its face, but president Todd Duboef, his stepson, has been a key driver for the company’s broadcast deal with ESPN+, as well as its global-facing strategies.

“Anything is for sale if I can stay alive in the business,” Arum, 88, told us, adding it would “absolutely” be the biggest combat sports asset on the market since the UFC sold four years ago.

“They [the UFC] did very well,” Arum said. “Dana White still has a big role in that company. He’s the spokesperson, Lawrence Epstein is the president [he’s the senior executive vice president and the COO], and [vice president of regulatory affairs] Marc Ratner is still there.

“So, yeah … of course, if you’re going to invest that much money in an enterprise, you’re going to keep the people. You don’t want to go in and start it from the get-go.” 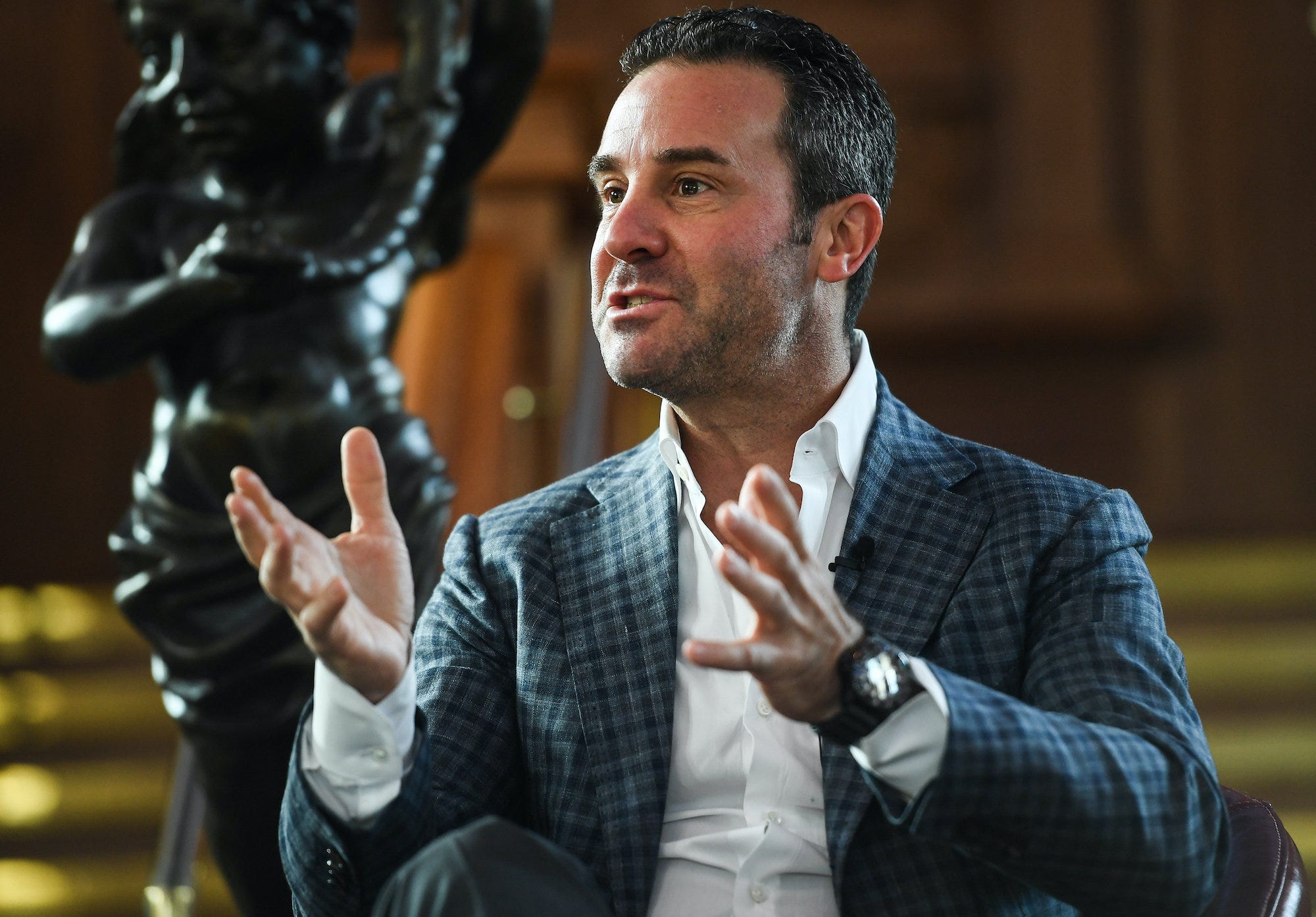 One of Duboef’s recent successes with Top Rank was his seven-year deal with ESPN+ in 2018. The broadcaster’s reach in the US, which includes fans of more popular sports like football, basketball, and baseball, means boxing can piggyback off of that support when it shares the same broadcaster.

“We wanted partners with the biggest reach which aligns with our brand,” Duboef recently told Business Insider.

“We just felt boxing should have a sports platform as people aren’t channel-surfing anymore. Let’s get our product, boxing, where the sports narrative is, and where the sports talk shows are. NFL, MLB, NBA, hockey, college sports … they’re showing everything, and this is how we elevate the sport and generate awareness to sports fans.”

Duboef told Business Insider that broadcasting deals these days have to be direct-to-consumer (DTC) with the Top Rank and ESPN model being a three-part strategy.

There are ESPN and ESPN2, which provide “general awareness” because of the big, talkshow megaphones. The second part, Duboef said, is about using the general awareness platform to guide customers toward the subscriber-based platform on ESPN+. Finally, the third part is the conventional pay-per-view model which boxing has long had, and where Arum and Duboef’s grand fights – like Deontay Wilder vs. Tyson Fury 2 in Las Vegas on Saturday – are held.

Business Insider recently ran a ranking of the top 15 boxers regardless of weight class, who are active in the sport today. Top Rank has four of them in its roster of athletes, together with many other high-level contenders and prospects.

Duboef said it was a clear strategy on Top Rank’s part to sign fighters from different regions around the world, like the British heavyweight Fury, the Japanese bantamweight Naoya Inoue, and the baby-faced Puerto Rican phenom Xander Zayas, who is only 17 years old but already creating headlines because of his skills, talent, and potential.

“It’s absolutely a big strategy of ours, and has been for a number of years,” Duboef said. “But give Bob credit, he said to me, ‘We’re going to sign Manny Pacquiao from the Philippines, and he’ll be a superstar.’ And I said, ‘Wait, you’re telling me a 122-pound is coming to America to take over?’

“I don’t think anyone could understand it because Bob says some outrageous stuff, as you know, but when we saw what happened, it doesn’t matter what country or race you’re from, people just love the sport of boxing, and want to watch a fight and support their fighters.

“Inoue, those guys, we chased it. Not wait for other people to do it. We used the skillset of the knowledge we’ve learned over the years, applied it today … and let’s do this with other talent that comes from different geographic areas and grow in those markets with that talent.”

Here’s some of the talent Top Rank has under contract: 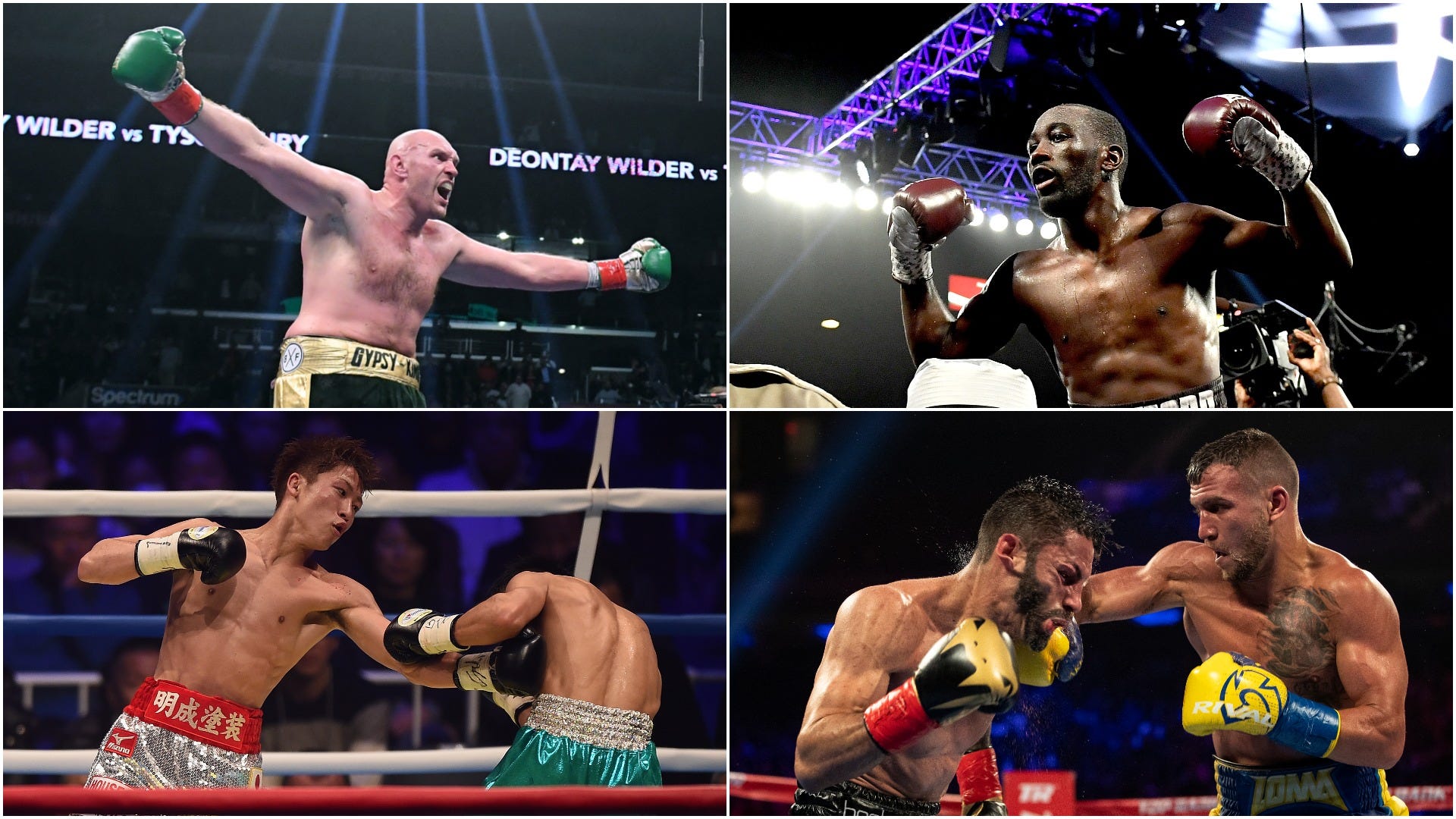 Photos by Getty ImagesTyson Fury, Terence Crawford, Naoya Inoue, and Vasyl Lomachenko are four Top Rank athletes, all of whom are featured in Business Insider’s list of the 15 best boxers in the world.

Though Fury is challenging Wilder for the heavy-hitting American’s WBC heavyweight championship this weekend, the way Arum tells it, he is just one of many marquee names Top Rank has in its stable.

“He’s a major element in our stable but … I’m a boxing person, and I look also at our other fighters, at the five top fighters in pound-for-pound ratings, three of them – Lomachenko, Crawford, and Inoue – are Top Rank fighters.

“But we have all of these great fighters knocking on the door of the top 10 in the world, pound-for-pound, and our job is to put them in the best fights, for them to make the most money, and for us to make money.”

With the talent at Top Rank’s disposal, the greatest challenge for Arum and Duboef is to ensure they are seen and to maximise the number of eyeballs on their athletes. Hence the ESPN deal, as Duboef hopes to cast a net over the Superbowl audience and attract those fans to Top Rank.

“Mainstream sports fans are tuning in to the Superbowl at something like 110 million people,” Duboef previously told us. “If I can get a good enough share of that, that moves over to my product, that likes sports, likes boxing, I don’t have to reeducate them, that’s a huge pool.

“There are 350 million in the US. And if I, or a sport, can grab a third of that, like the Superbowl does, that is success … real success.”

A source with knowledge of the situation told Business Insider that Duboef is a significant shareholder in the company, but does not want to sell.

Regardless, Arum told us he has had talks with other companies.

When Business Insider asked Arum if all assets that Top Rank owns would be a part of any deal to sell, he said, “sure.”

This includes the fight library and the real estate which Top Rank owns, outright, mortgage-free.

“When someone’s making a movie, we lease [our fight content to them],” Arum told us. “We have maybe 10,000 great, great fights. Well, some greater than others, but great fights.

“As for the building [Top Rank HQ], we own it. We own the Top Rank gym, the building, and there is no debt on it. We bought it during the recession when the Lehmann Brothers went bankrupt [2008].

“They owned all these buildings on this line, and we bought it, [luxury casino magnate] Steve Wynn bought the two buildings next to us for design and so forth. Then we bought this and brought a great architect in, who is a friend, and he designed this place. We still have 5,000 square feet that we are not using!”

Arum said he has discussed the company with Endeavour, Liberty Global, and DAZN, though the latter could be problematic due to Top Rank’s existing deal with broadcasting rival ESPN.

“Again, our dream is to really get boxing on a global level with fights all over the world. That takes resources … money … so we know even though we’ve done really well and we are a solid company, we will need more resources to reach what can be accomplished in this business.”