45 photos that show how Lupita Nyong'o's style has evolved

Lupita Nyong’o became a breakout star in Hollywood after her performance in the 2013 film “12 Years a Slave.” And since then, she’s gone on to land roles in major films like “Star Wars: The Last Jedi,”“Black Panther,” and Jordan Peele’s “Us.”

Her red carpet style has changed over the years, but one thing that’s clear is that Nyong’o is never afraid to take fashion risks.

Here’s a look at the stunning outfits Nyong’o has worn.

At the 2013 Toronto premiere of “12 Years a Slave,” Nyong’o wore a white and gold gown, and accessorized with a bedazzled gold clutch. 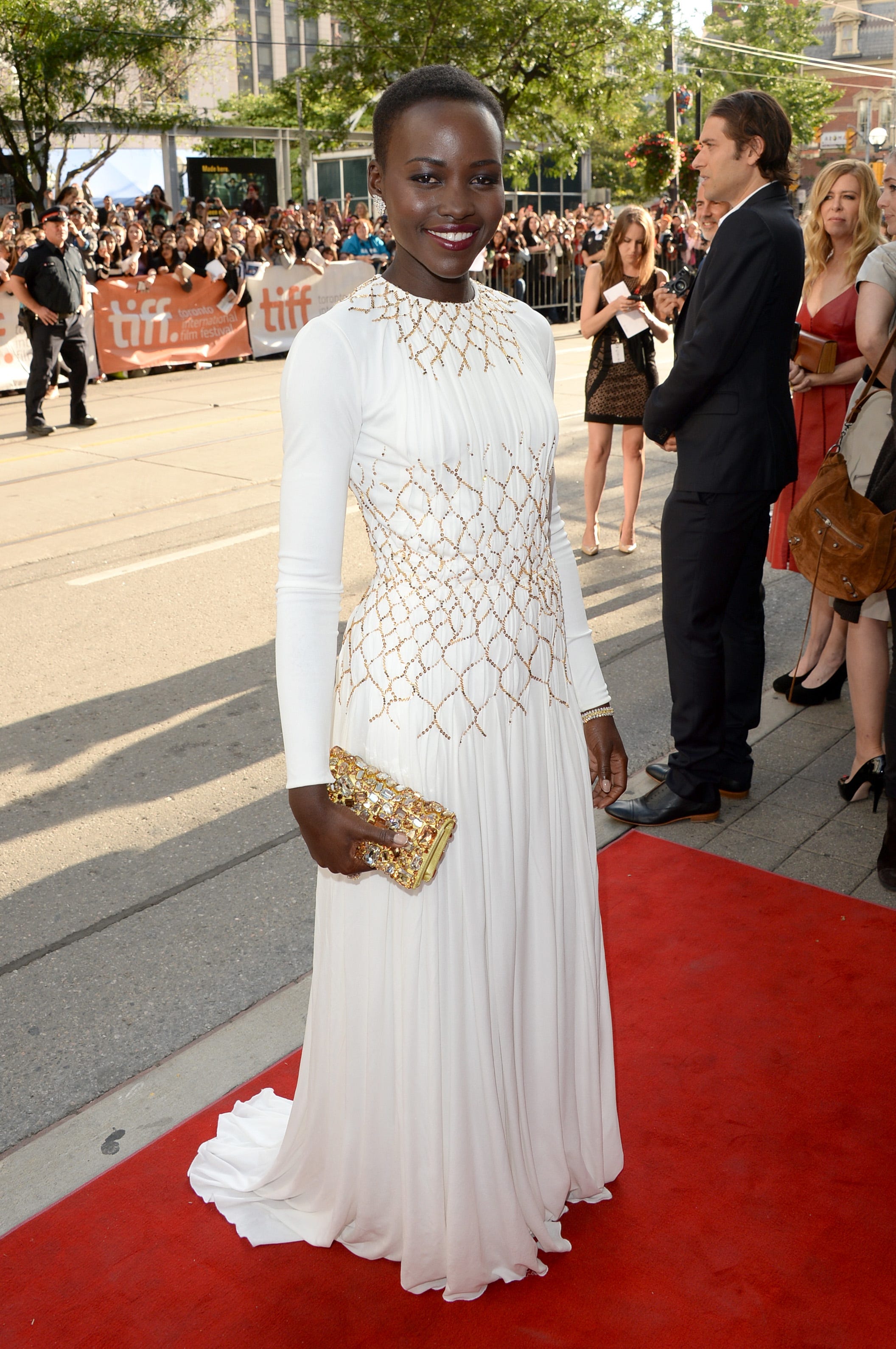 Jason Merritt/Getty ImagesLupita Nyong’o at the ’12 Years a Slave’ premiere in 2013.

Nyong’o starred as Patsey in “12 Years A Slave.”

Nyong’o opted for a black, strapless jumpsuit at a Hollywood Foreign Press Association and InStyle party held on September 9, 2013. 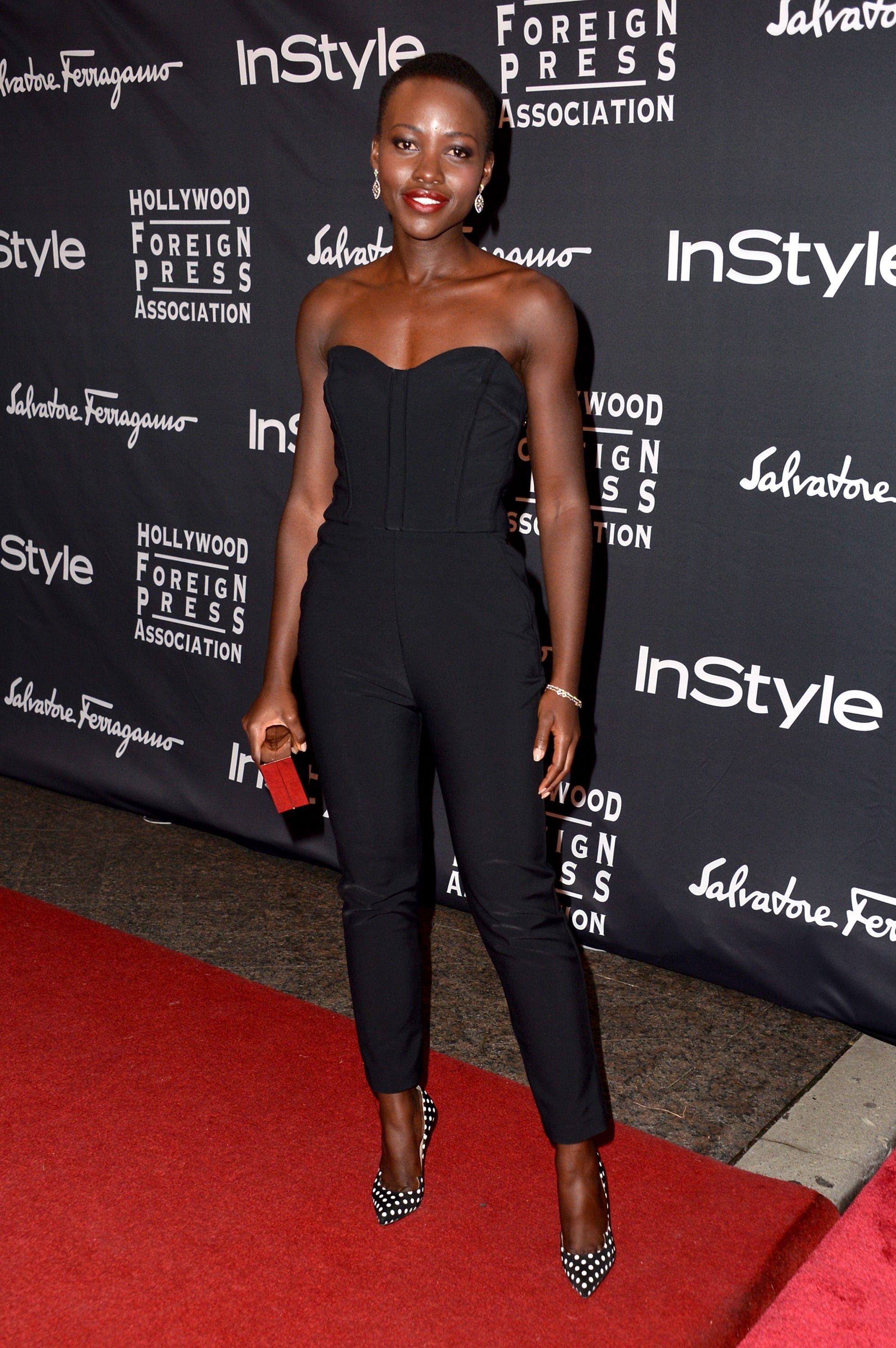 Nyong’o was joined at the event by Jessica Chastain, Mark Wahlberg, and Emilia Clarke. 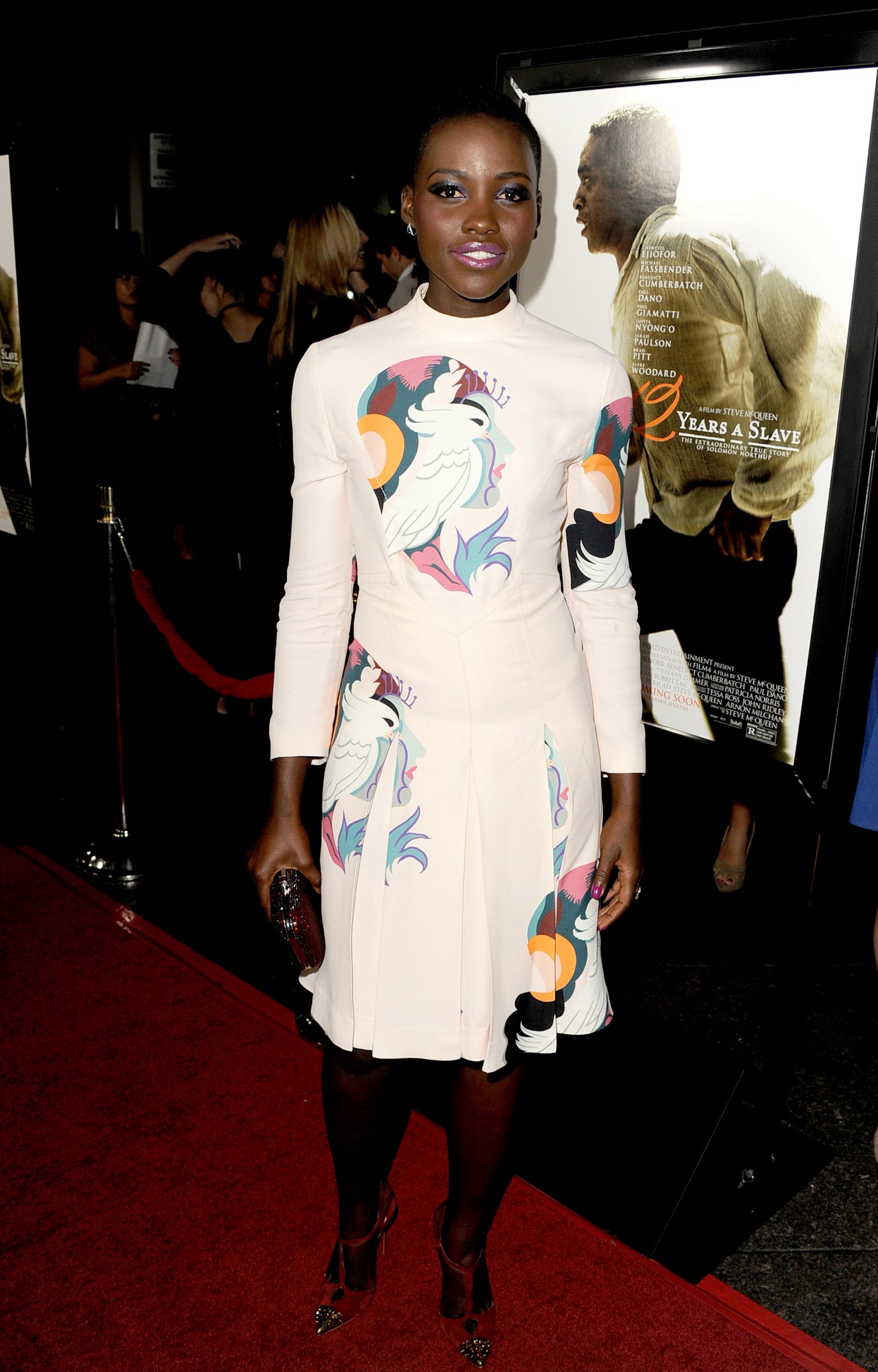 Kevin Winter/Getty ImagesLupita Nyong’o at the ’12 Years a Slave’ premiere.

Nyong’o never shies away from wearing a bright and bold colour.

She wore this J. Mendel gown at the 2013 Hollywood Film Awards.

Rob Kim/Getty ImagesLupita Nyong’o at the Museum of Modern Art.

The event was a tribute to actress Tilda Swinton.

At GQ’s Men of the Year party, Nyong’o wore a pastel pink dress with fun cutouts, pointed heels, and a clutch that completed her outfit. The event took place at The Ebell Club of Los Angeles on November 12, 2013.

Nyong’o had fun in a Lanvin colour-block gown at the BAFTA LA Jaguar Britannia Awards. 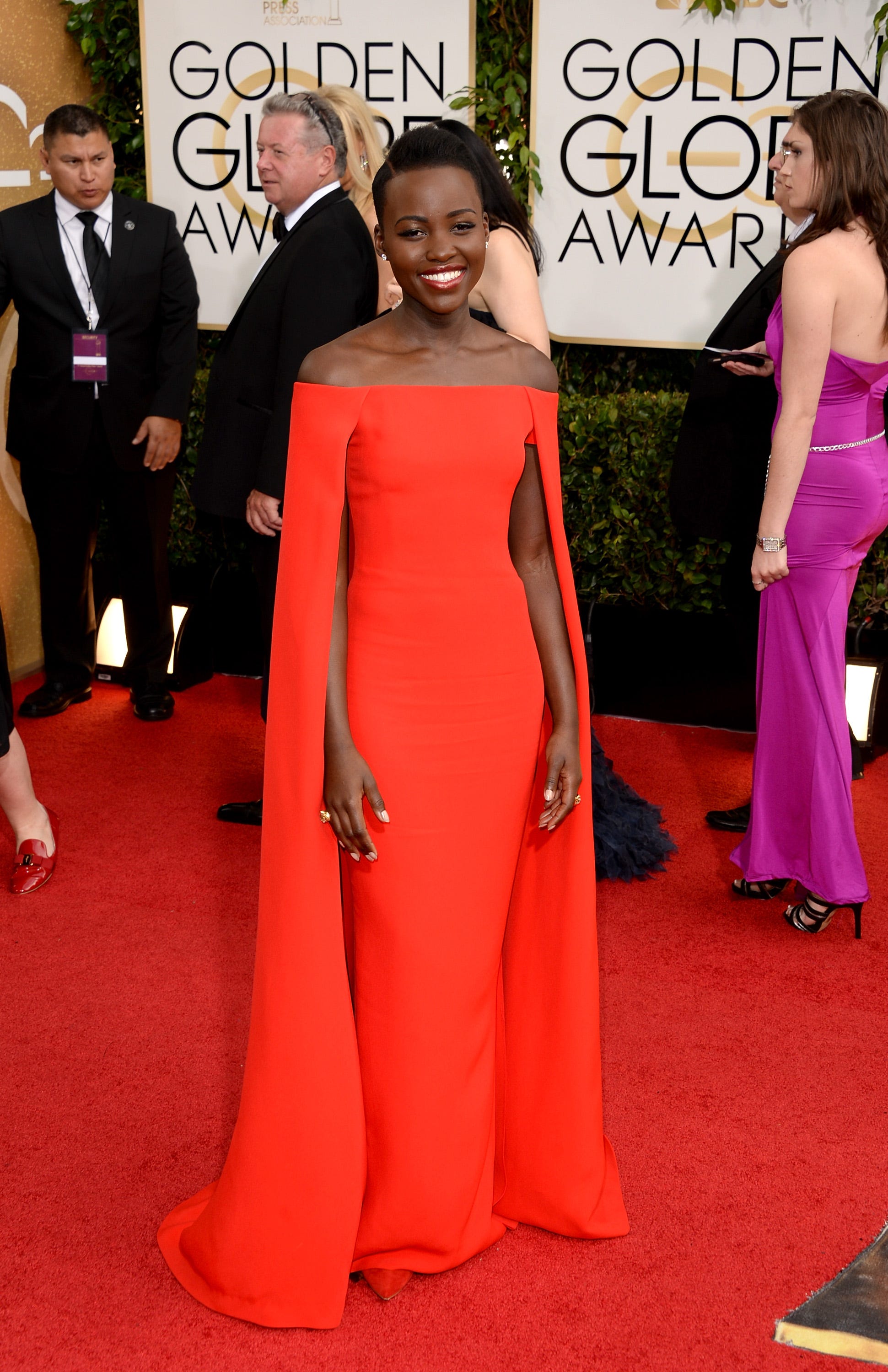 That year, she was nominated for a Golden Globe for best performance by an actress in a supporting role in a motion picture. 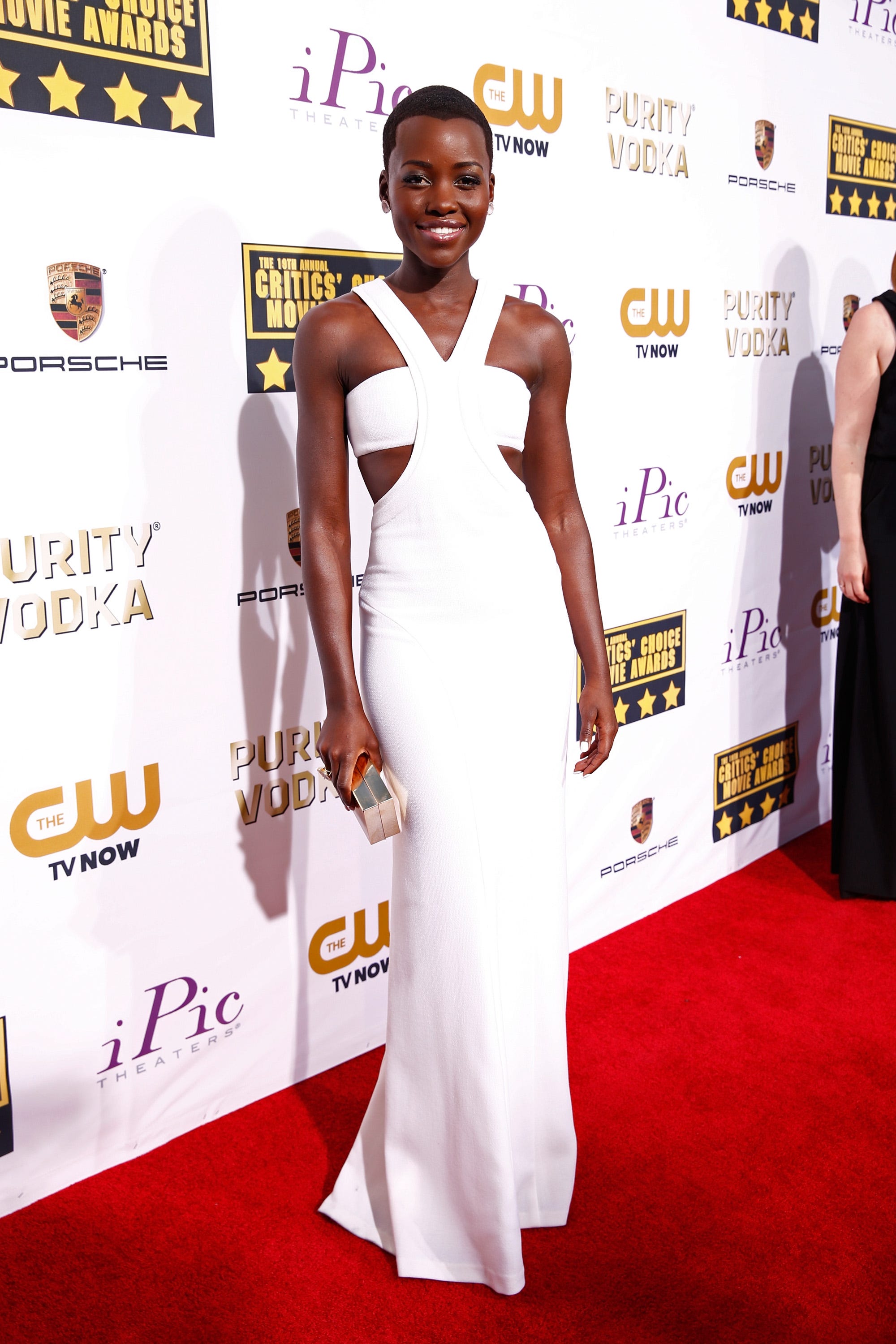 The look was completed with sparkly eyeshadow and a silver clutch.

Nyong’o unintentionally matched with her statuette at the 2014 SAG Awards. 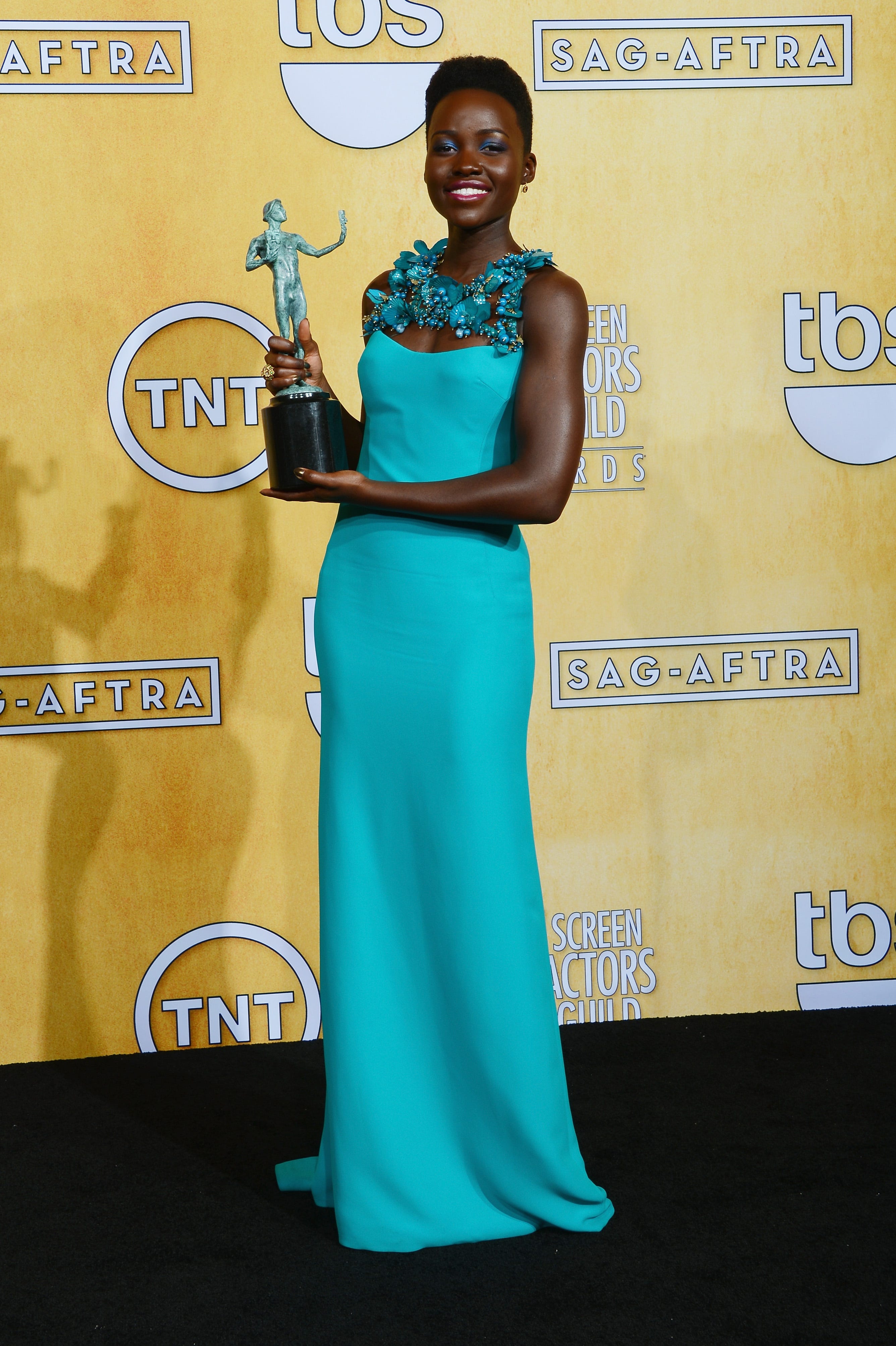 Ethan Miller/Getty ImagesThe SAG figure holds a comedy mask in one hand and a tragedy mask in the other.

She won the award for outstanding performance by a female actor in a supporting role for “12 Years a Slave.”

At The Hollywood Reporter’s Nominees Night in February 2014, Nyong’o opted for a nude-coloured dress with a bright red lip shade and strappy heels. 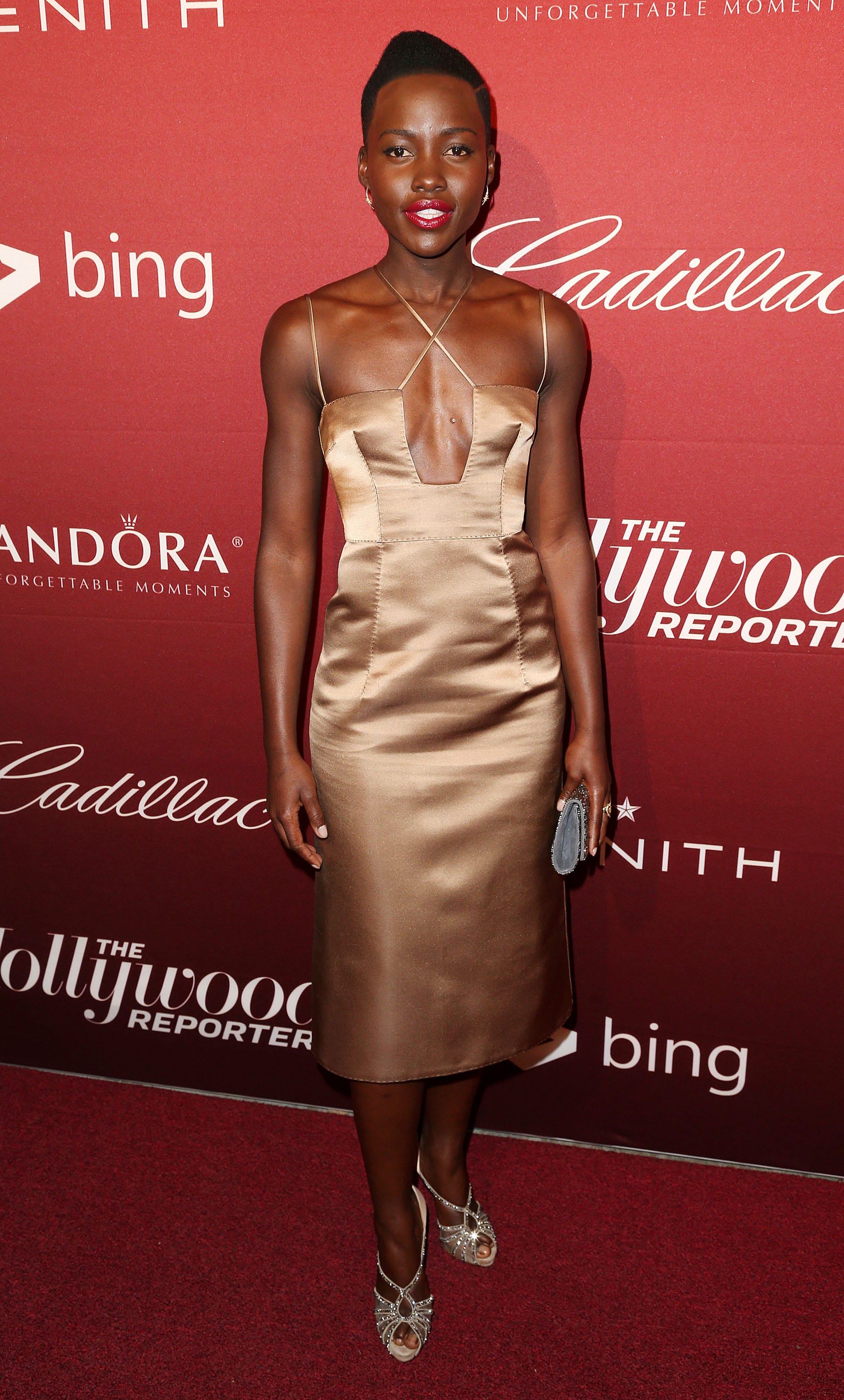 The event was held in Beverly Hills, California. 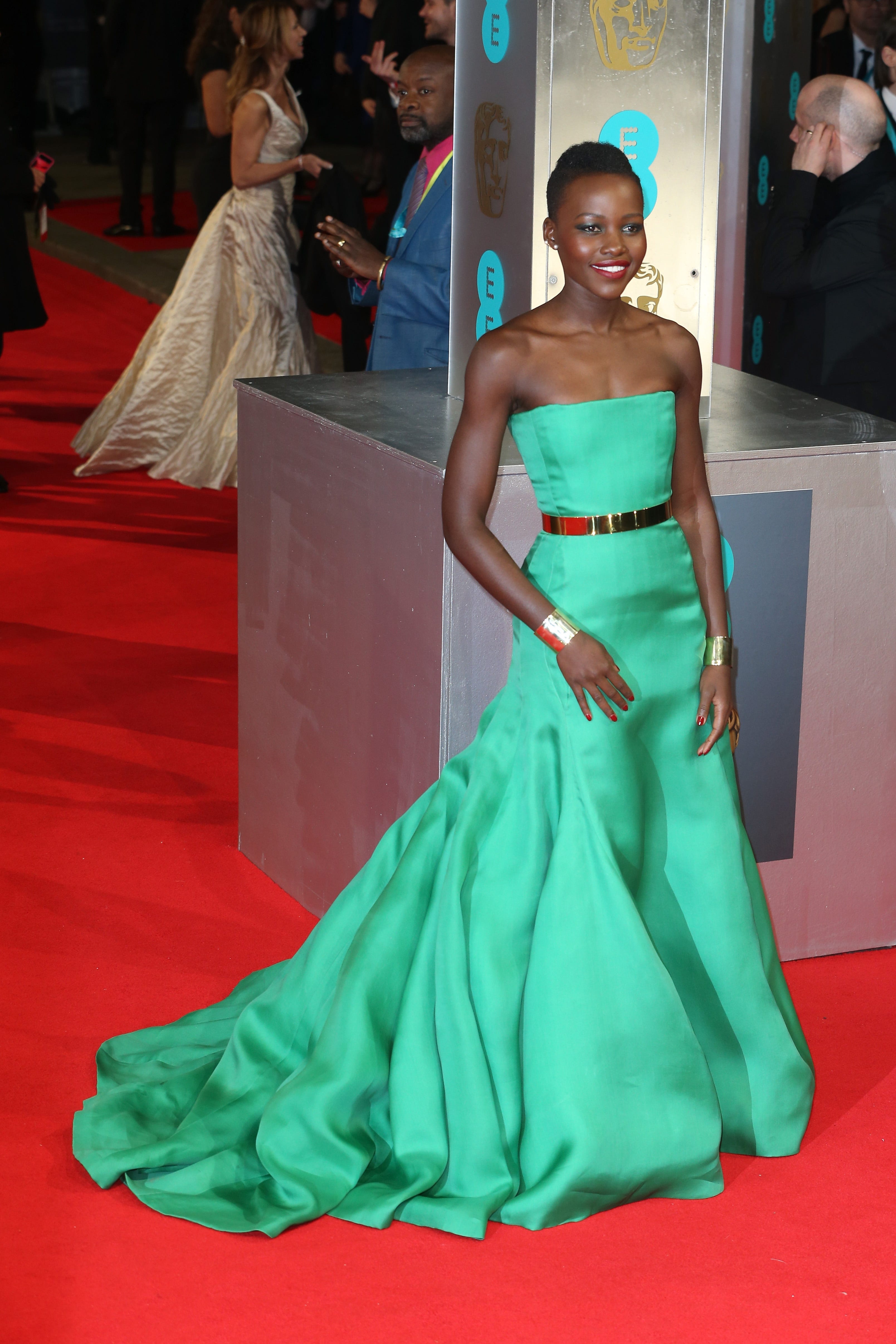 Chris Jackson/Getty ImagesThe ceremony was held at The Royal Opera House in London on February 16, 2014.

Her gold accessories completed the look.

Nyong’o was a standout at the 2014 NAACP Image Awards, wearing an orange Givenchy dress, metallic eyeshadow, and gold jewellery. 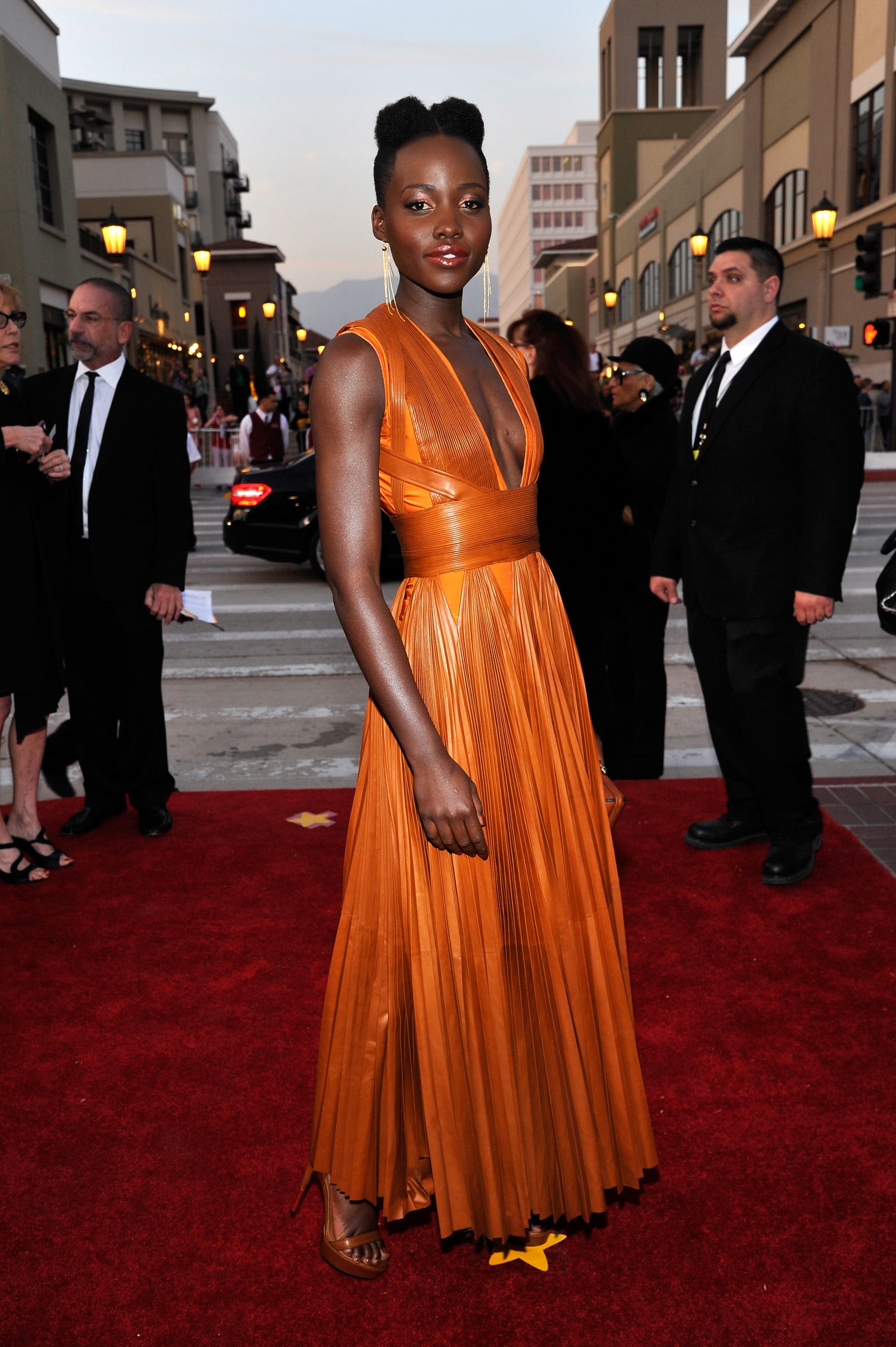 That day, Nyong’o took home the award for outstanding supporting actress in a motion picture.

Nyong’o’s custom pale blue Prada dress was one of the most talked-about looks from the 2014 Oscars. 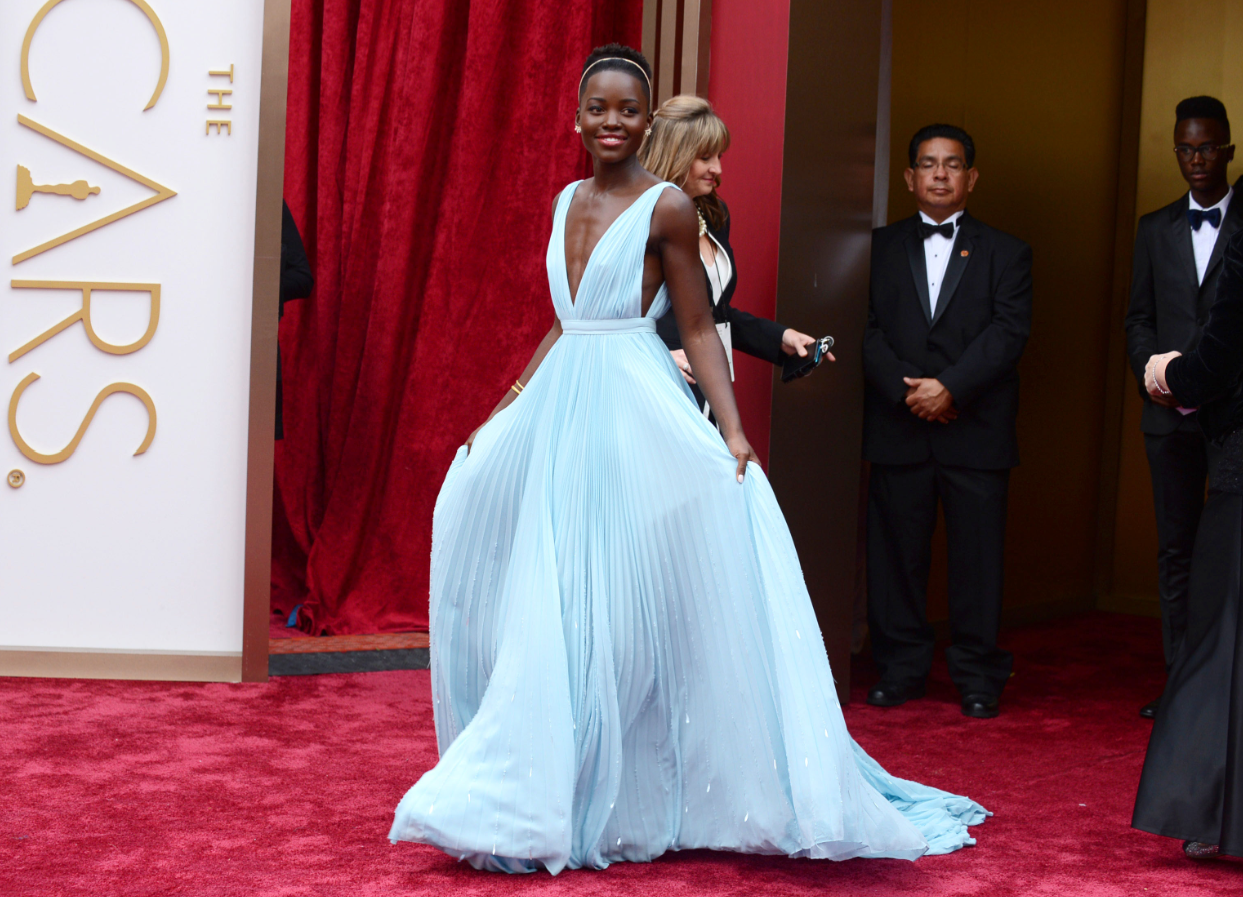 Jordan Strauss/Invision/APShe was also a winner that night, taking home the award for best performance by an actress in a supporting role.

“It’s a blue that reminds me of Nairobi, so I wanted to have a little bit of home,” Nyong’o explained at the red carpet.

Nyong’o switched things up for the post-Oscars celebrations, wearing a white dress with green accents and matching peep toe heels. 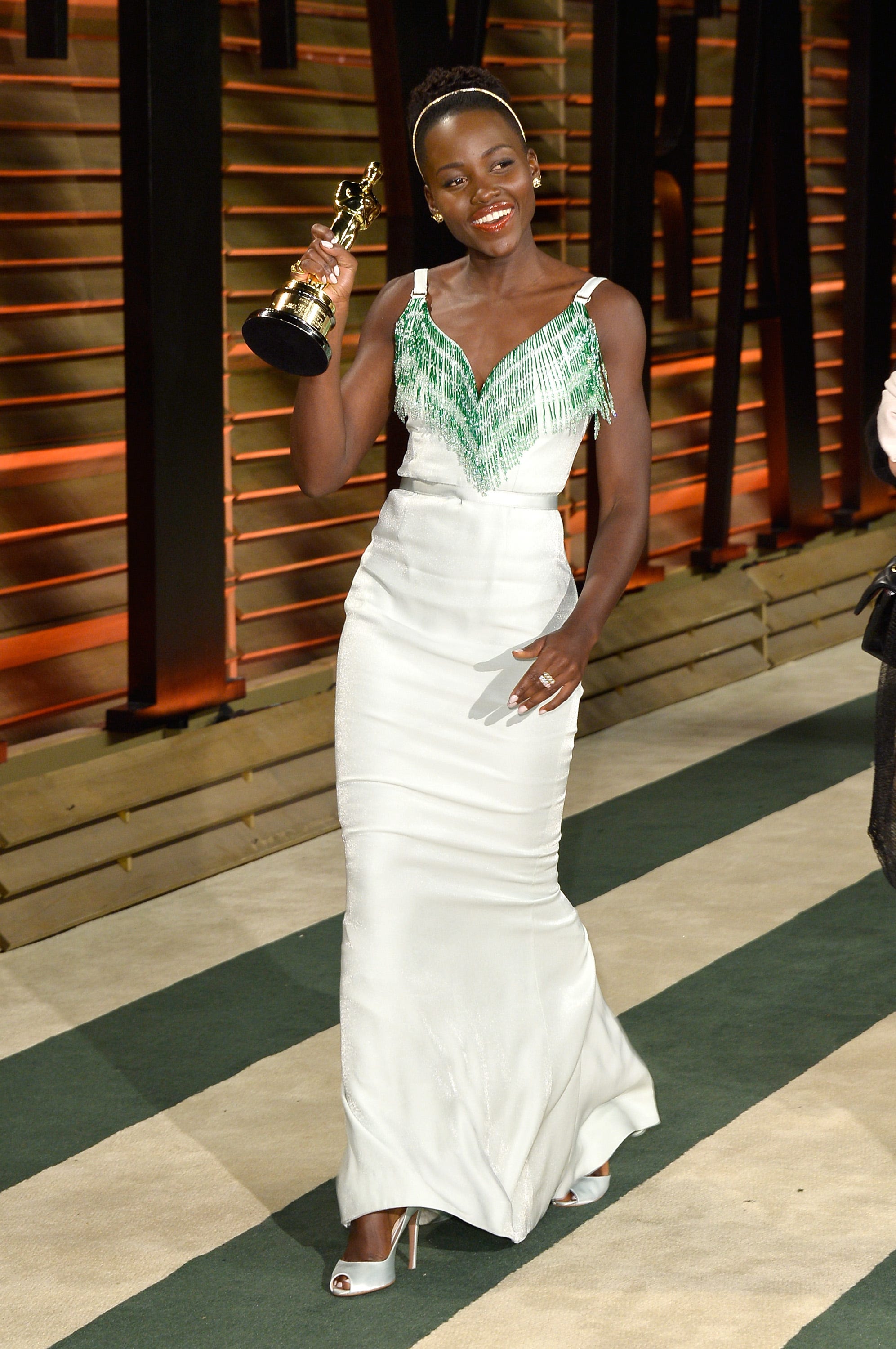 Pascal Le Segretain/Getty ImagesLupita Nyong’o was all-smiles after the Oscars.

Her hot pink lip shade was a surprising, yet fun addition to the outfit.

Nyong’o attended her first Met Gala on May 5, 2014 and wore a daring head-to-toe green Prada outfit.

The addition of purple eye makeup paired well with her green theme. 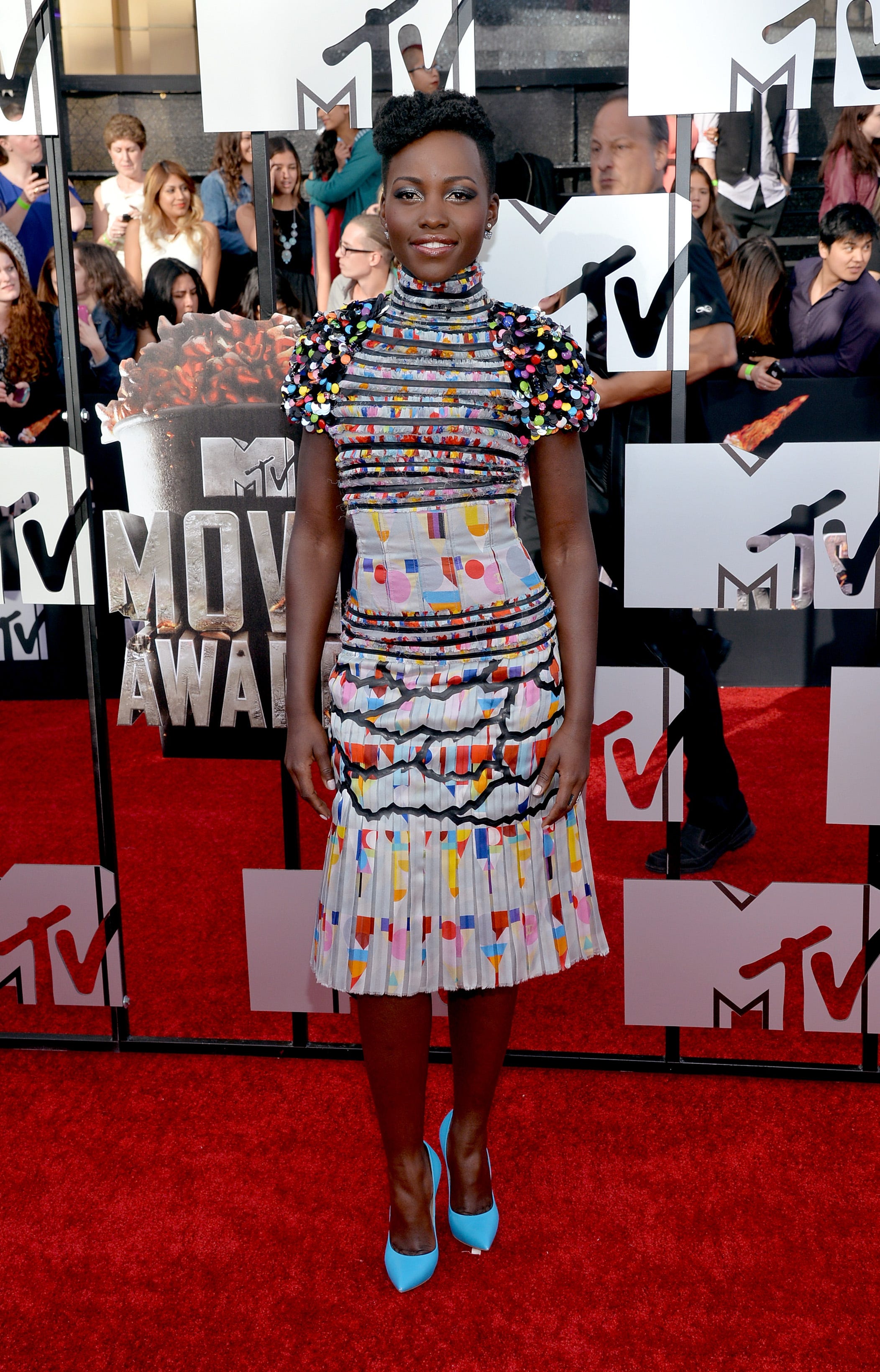 You never know what Nyong’o will wear to a red carpet, and somehow she pulled off this risky look.

Nyong’o’s 2014 CFDA Fashion Awards look proves that she is willing to have fun with her outfits. 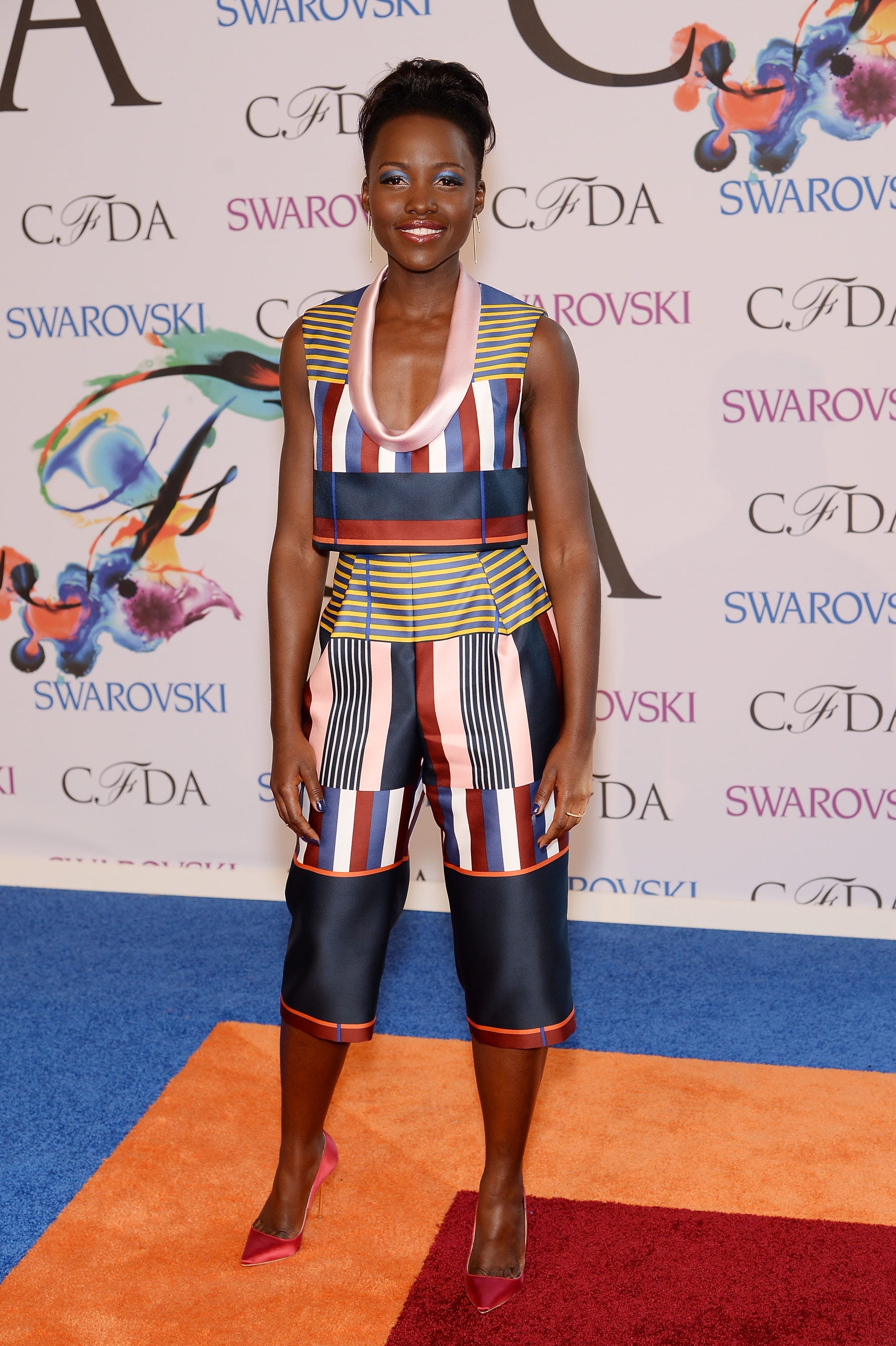 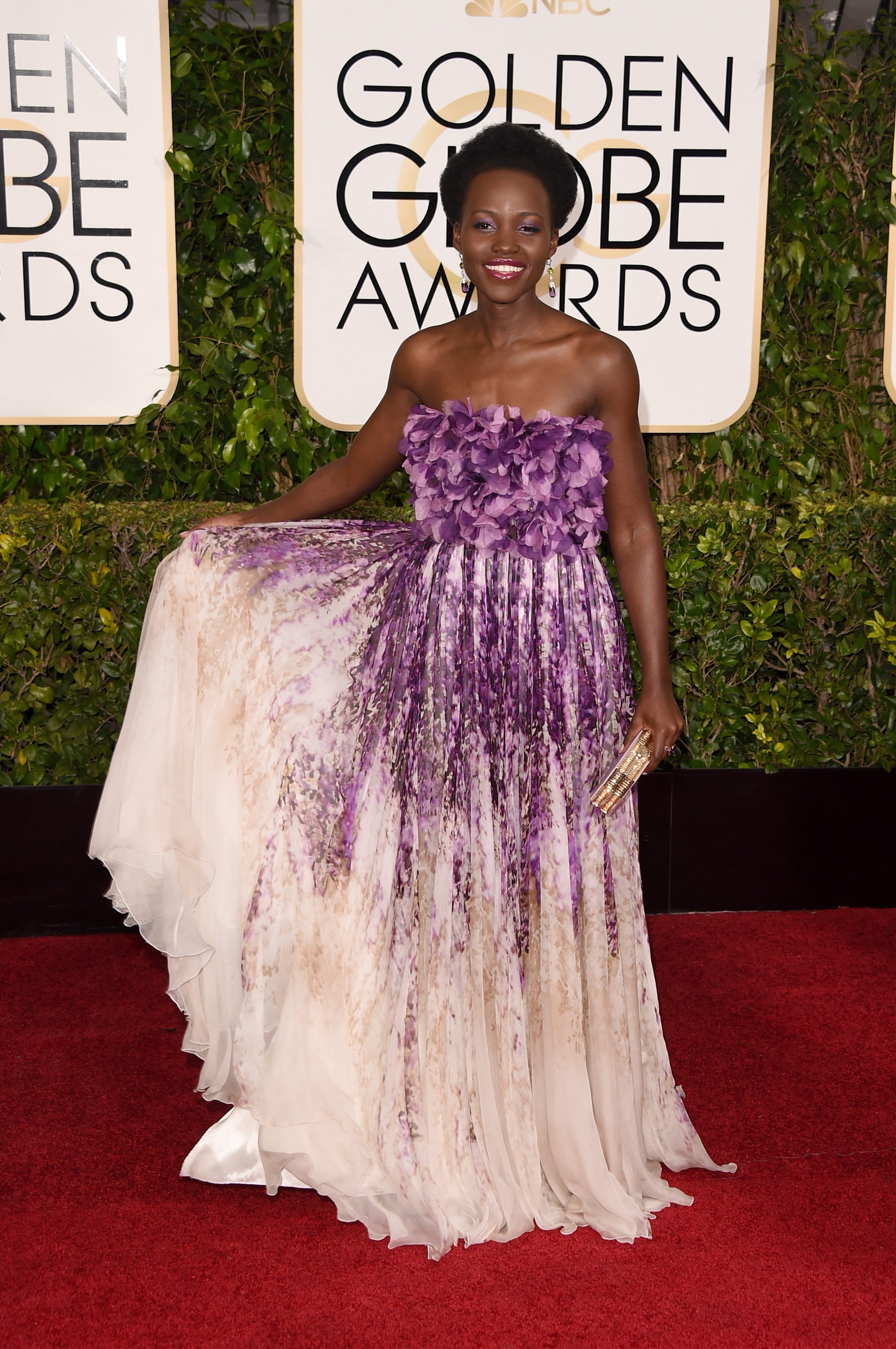 She elevated the look with bright pink Lancome lipstick and purple eyeshadow.

Nyong’o was glowing in this long-sleeved Elie Saab dress at the 2015 SAG Awards.

Theo Wargo/WireImage via Getty ImagesThat evening, Nyong’o took the stage with Jared Leto to present the award for outstanding male actor in a TV movie or miniseries.

Her makeup artist, Nick Barose, said the beauty look was inspired by “Gone With the Wind.”

At the 2015 Academy Awards, Nyong’o stunned in this custom Calvin Klein dress, which was reportedly made using more than 6,000 pearls. 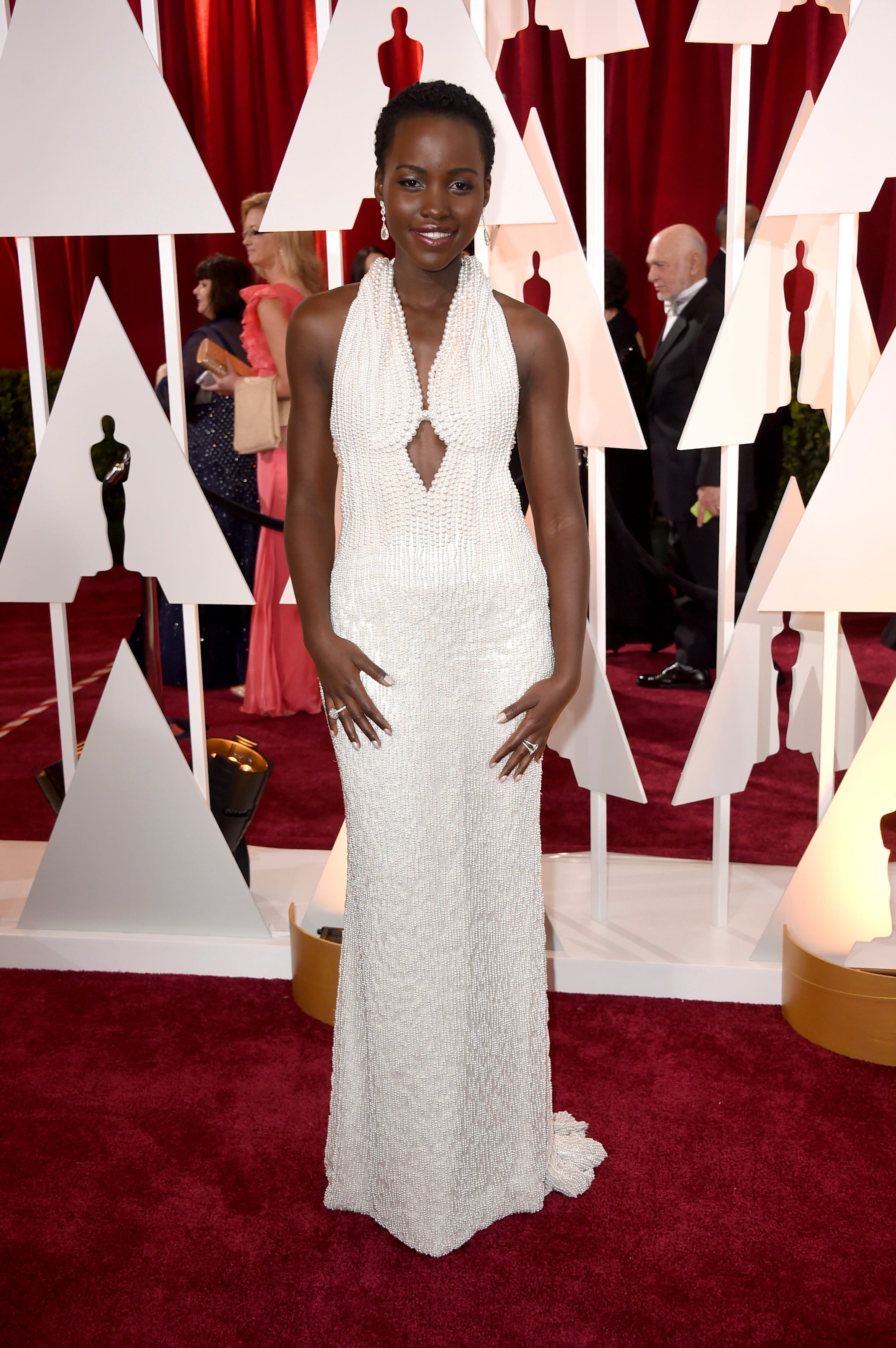 Her Nicholas Kirkwood shoes also had pearls on them.

At the Cannes Film Festival in May 2015, Nyong’o wore a custom green Gucci gown with floral accents.

Taking to Instagram, Nyong’o called the dress shade “grasshopper green,” and it paid homage to Uganda.

For the “Star Wars: The Force Awakens” premiere in December 2015, Nyong’o sparkled in a metallic Alexandre Vauthier Haute Couture gown.

“I thought I’d bring the galaxy with me,” Nyong’o said on the red carpet.

The actress dazzled in this neon green shirt and sequined skirt at the 2016 premiere of “The Jungle Book.”

Nyong’o voiced the character Raksha in “The Jungle Book.”

At the 2016 Met Gala, Nyong’o embraced the “Manus x Machina: Fashion in an Age of Technology” theme with this shiny, jade gown. 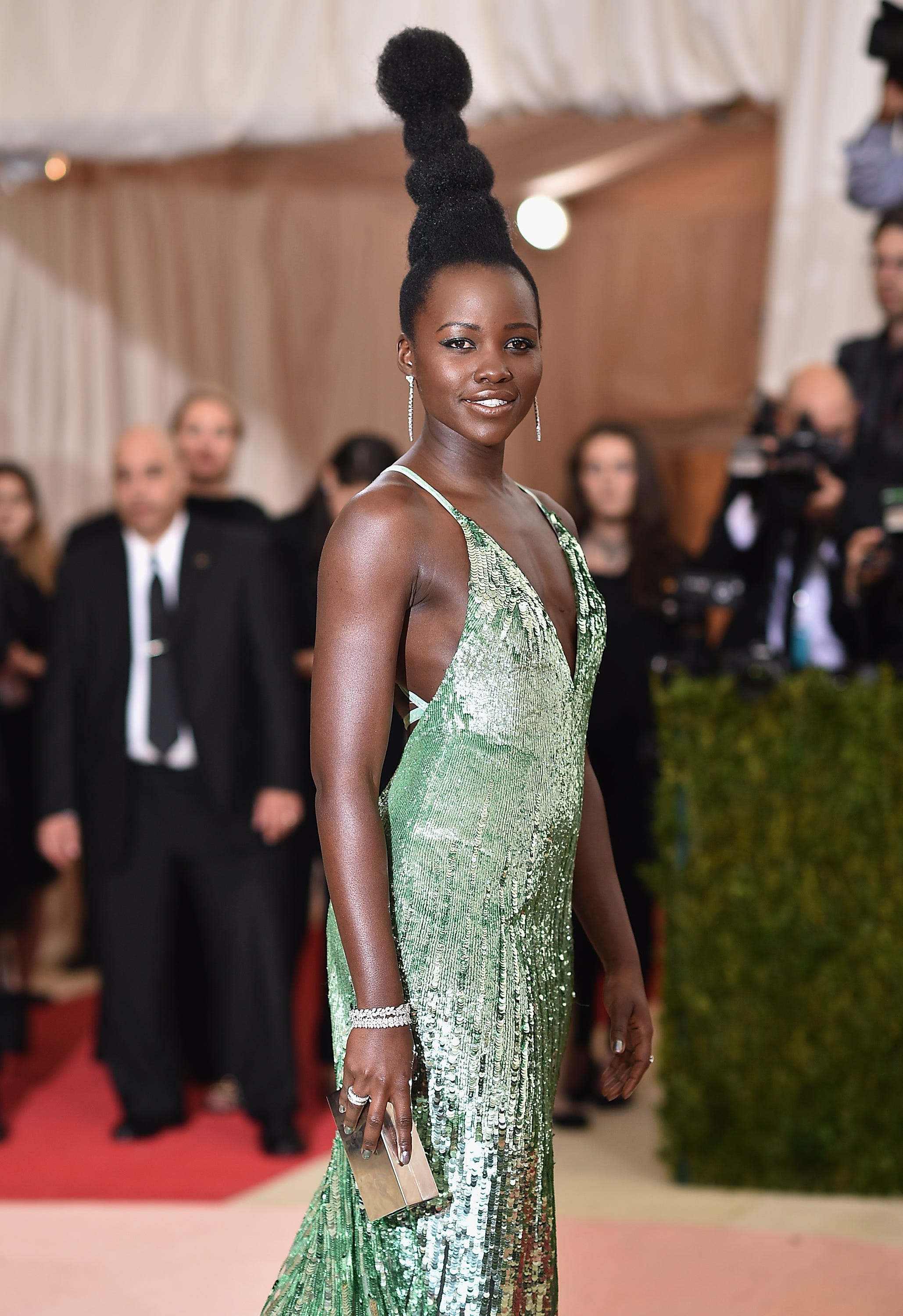 Nyong’o said that her hairstyle was inspired by Nina Simone and “sculptural hairdos from all around the continent.” 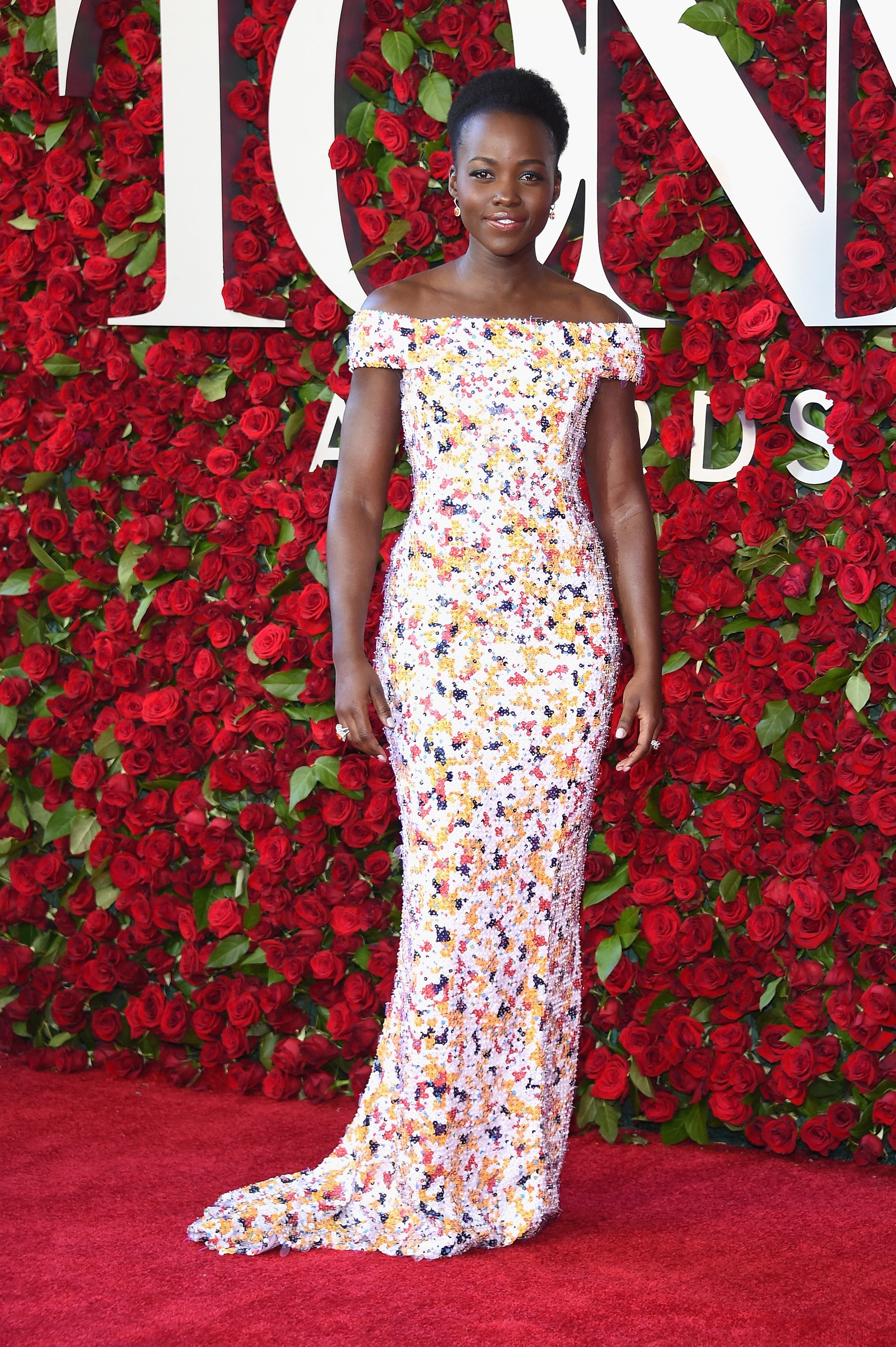 Dimitrios Kambouris/Getty Images for Tony Awards ProductionsIn 2016, she was nominated for a Tony for best lead actress in a play.

“I was looking at these Tetris colours and [wanted to] create something bright and exciting and textural,” designer Jason Wu told Vogue.

Nyong’o looked elegant and beautiful in this lilac Elie Saab outfit at the premiere for Disney’s “Queen of Katwe” in September 2016. 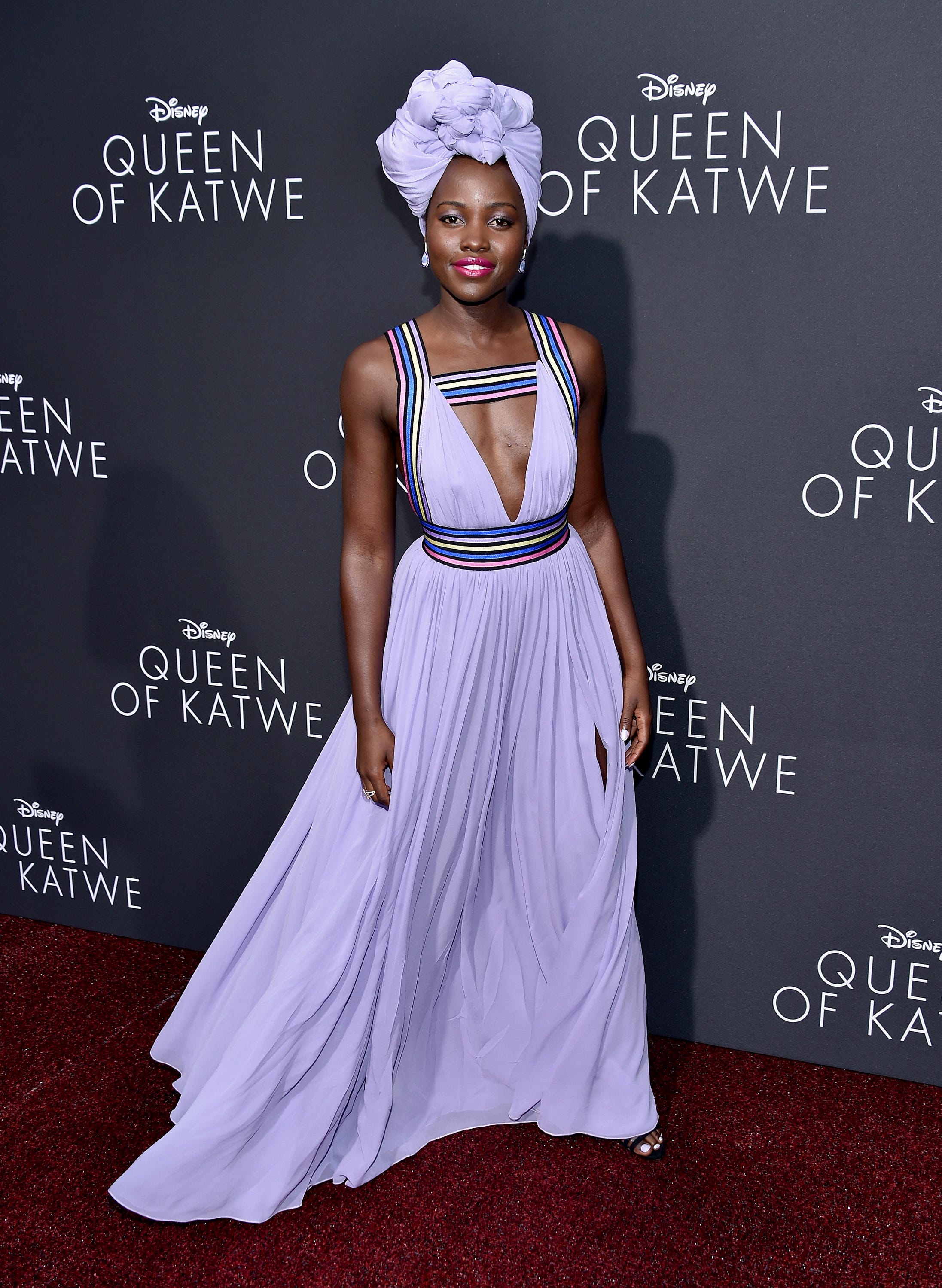 Mike Windle/Getty ImagesLupita Nyong’o at the ‘Queen of Katwe’ premiere.

Nyong’o starred as Nakku Harriet in the film.

Nyong’o was one of the women honoured at Elle’s Women in Hollywood Awards in October 2016. She wore a shimmering dress designed by Duro Olowu.

“I grew up with a very limited mirror of myself,” Nyong’o said. “I watched a lot of TV, but the people on it were always light skinned. And now I have a platform that takes me into people’s houses and onto the pages of their magazines.”

People couldn’t get enough of Nyong’o in an orange, feathered Prada dress at the 2017 Met Gala. 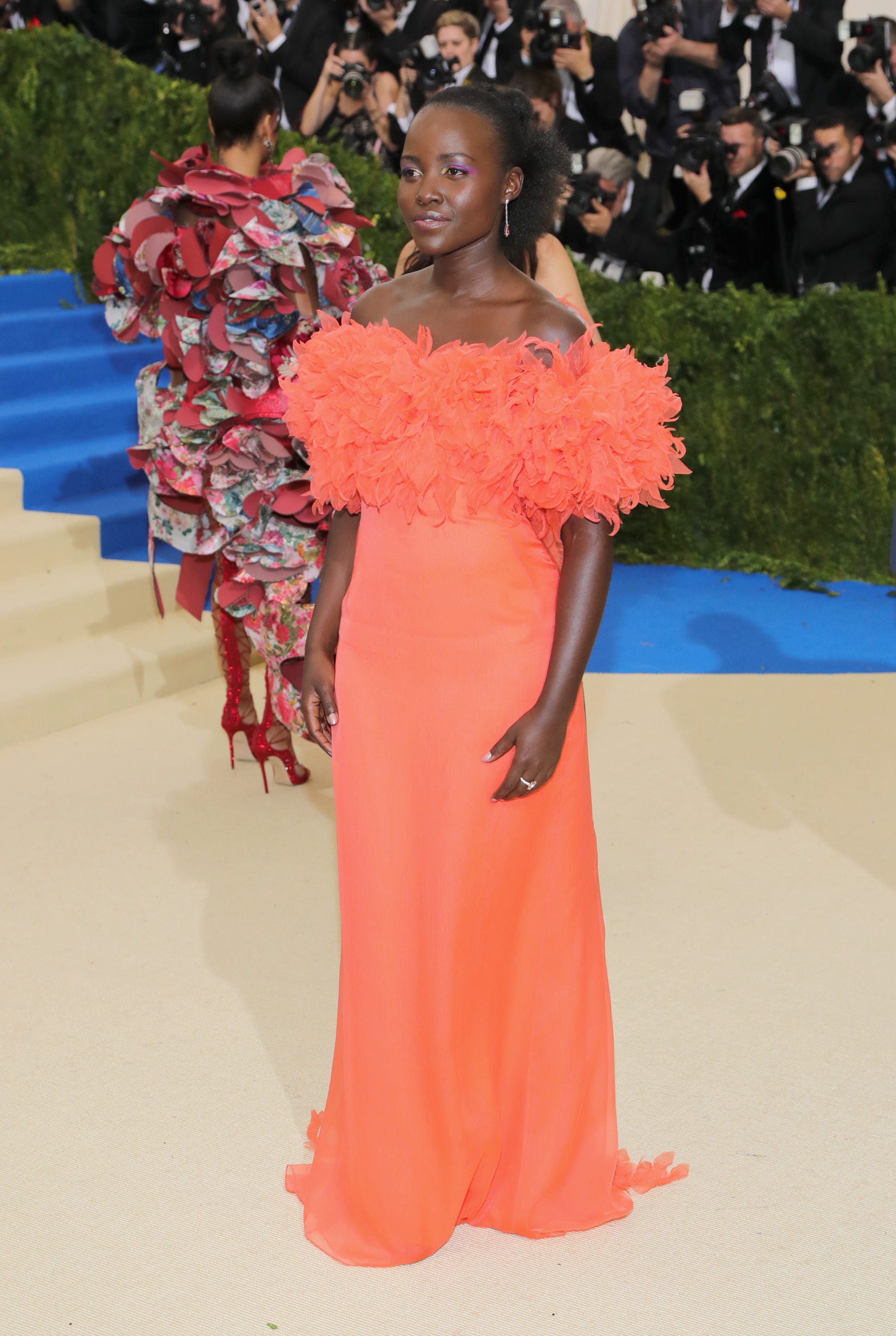 If you look closely, you’ll notice that several different eyeshadow colours were applied to her lids. 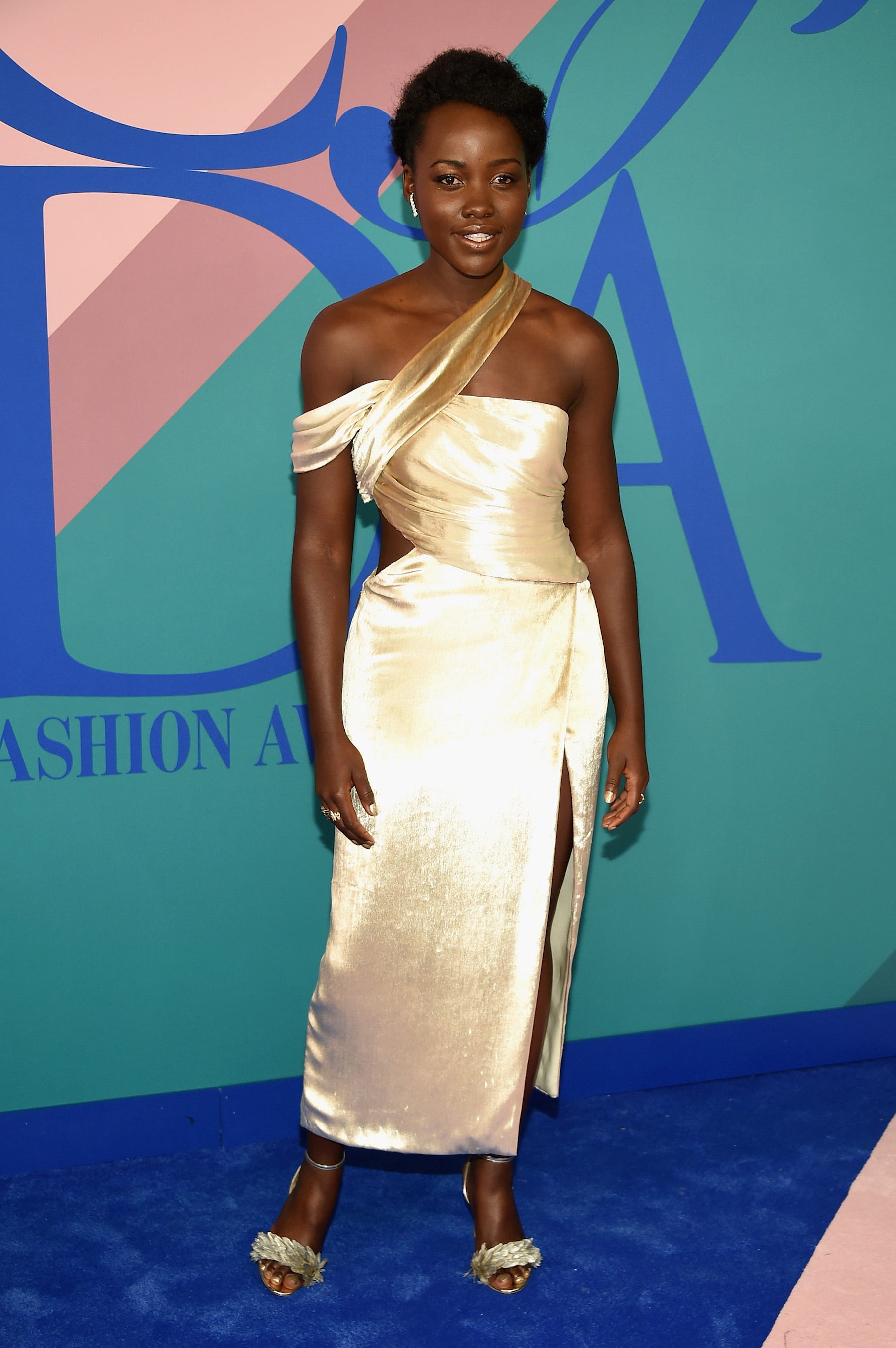 She added feathered shoes and minimal accessories to complete the look.

At San Diego Comic Con in July 2017, Nyong’o wore a green outfit and participated in a Marvel panel that included a “Black Panther” teaser.

She also showed up to the convention disguised as a pink “Power Ranger.”

For the red carpet premiere of “Star Wars: The Last Jedi,” the actress wore a dark green, sparkling Halpern dress and jewellery from Tiffany & Co.

This is not the first time she’s stunned in a green outfit.

Nyong’o stepped out at the 2018 SAG Awards wearing a silver and black gown with a feathered train. 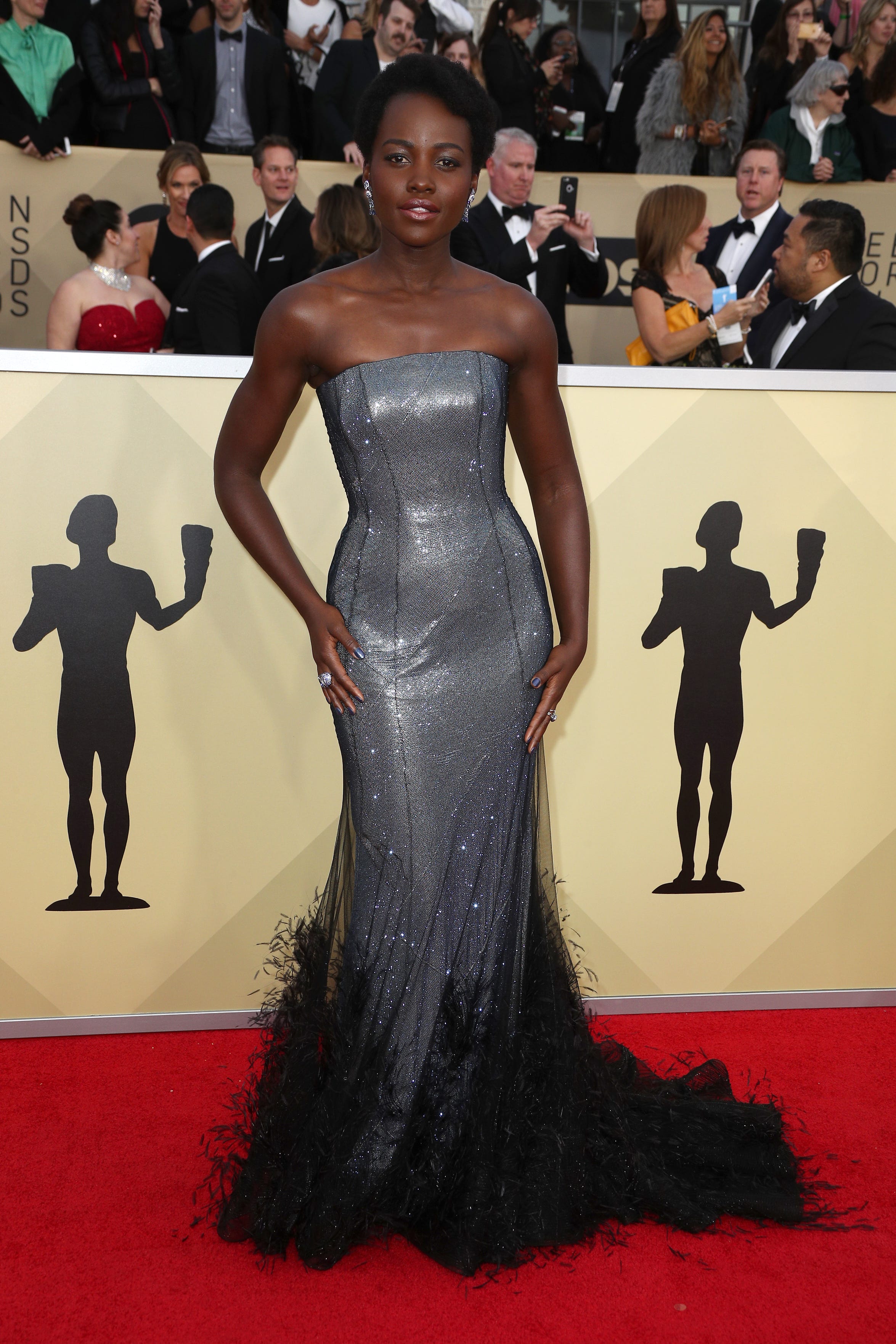 She presented at the show with Brie Larson.

At the “Black Panther” premiere, Nyong’o wore a custom purple and gold Atelier Versace gown, perfect for the Marvel movie.

Nyong’o stars as Nakia in the Marvel Cinematic Universe.

Nyong’o opted for a black and gold Versace gown for the 2018 Oscars.

Kevork Djansezian/Getty ImagesLupita Nyong’o at the Oscars in 2018.

The dress included a thigh-high slit.

At the 2018 Vanity Fair Oscars celebration, Nyong’o changed into a sleek black dress with a plunging neckline.

The outfit was designed by Armani Prive.

In May 2018, she wore a voluminous pale pink dress.

The actress was in France for the 71st annual Cannes Film Festival.

The actress wore a blue beaded Calvin Klein dress to the 2019 Golden Globes.

Axelle/Bauer-Griffin/FilmMagic via Getty ImagesLupita Nyong’o at the 76th Golden Globes in January 2019.

Axelle/Bauer-Griffin/FilmMagic via Getty ImagesLupita Nyong’o at the 2019 Vanity Fair Oscar Party in February 2019.

Nyong’o wore red contacts to match her crimson dress at the UK premiere of “Us” in March 2019. 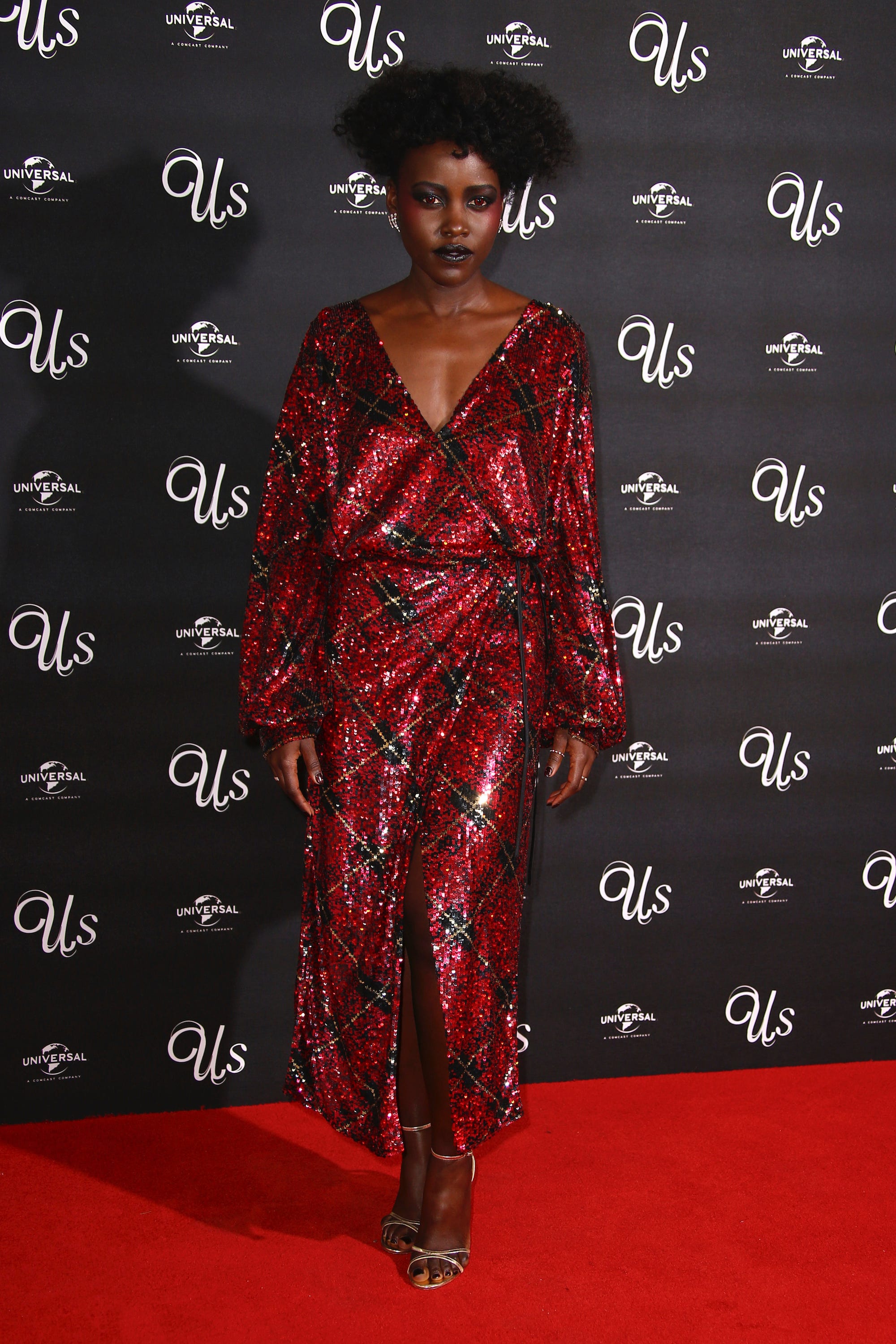 Joel C Ryan/Invision/APLupita Nyong’o at the premiere of the film ‘Us’ in March 2019.

Makeup artist Nick Barose told Insider that the look was inspired by “fierce women in ’80s music videos” and he hoped the look “inspires women to embrace their darker and wicked sides.”

Later that month at the NAACP Image Awards, she wore a dark purple gown with billowing sleeves and a thigh-high slit. 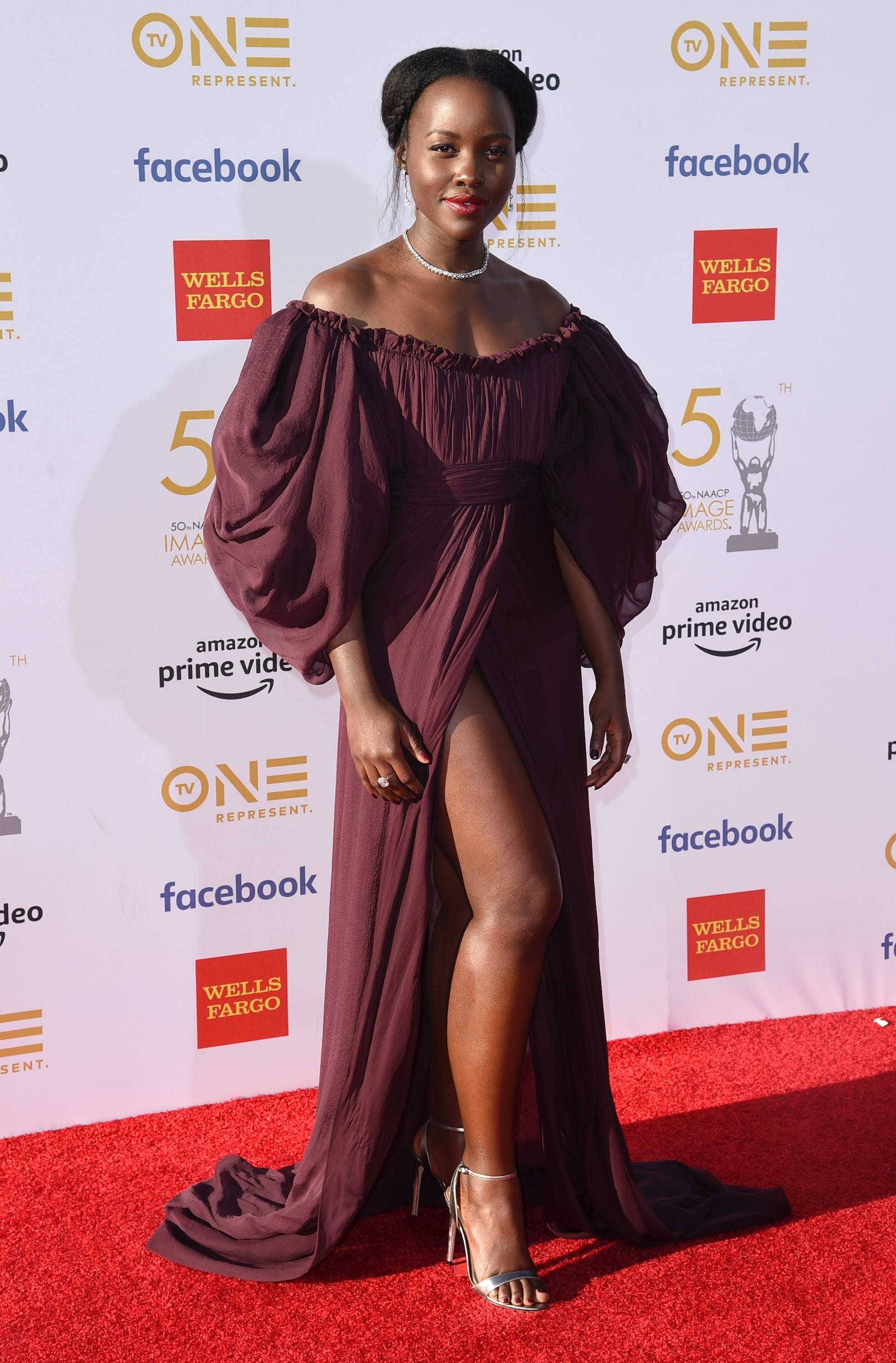 Nyong’o was nominated for best supporting actress in a motion picture for her role in “Black Panther.” 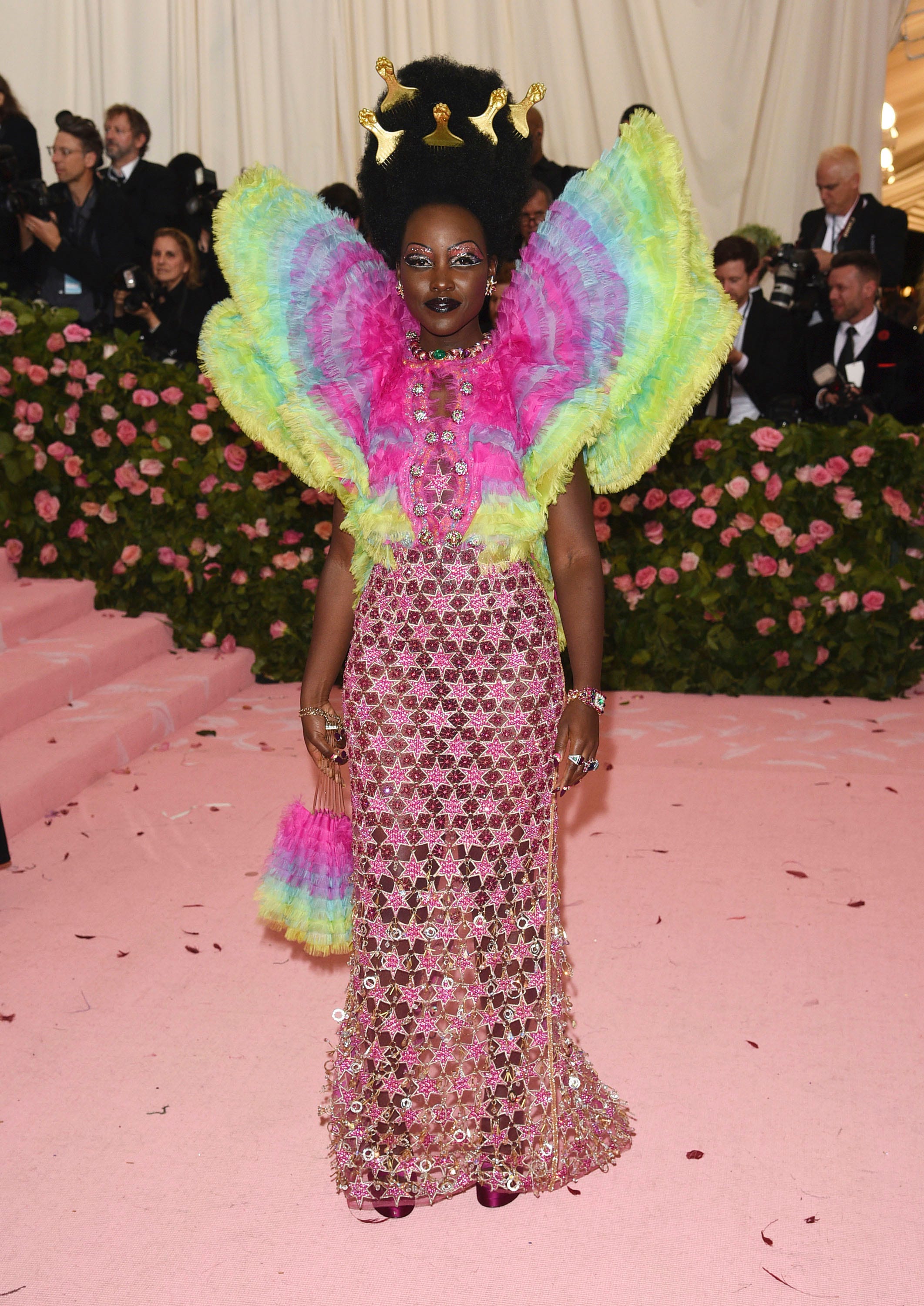 The theme was “Camp: Notes on Fashion.”

At the Governor’s Awards in October 2019, the actress wore a colourful, floral halter dress from Givenchy. 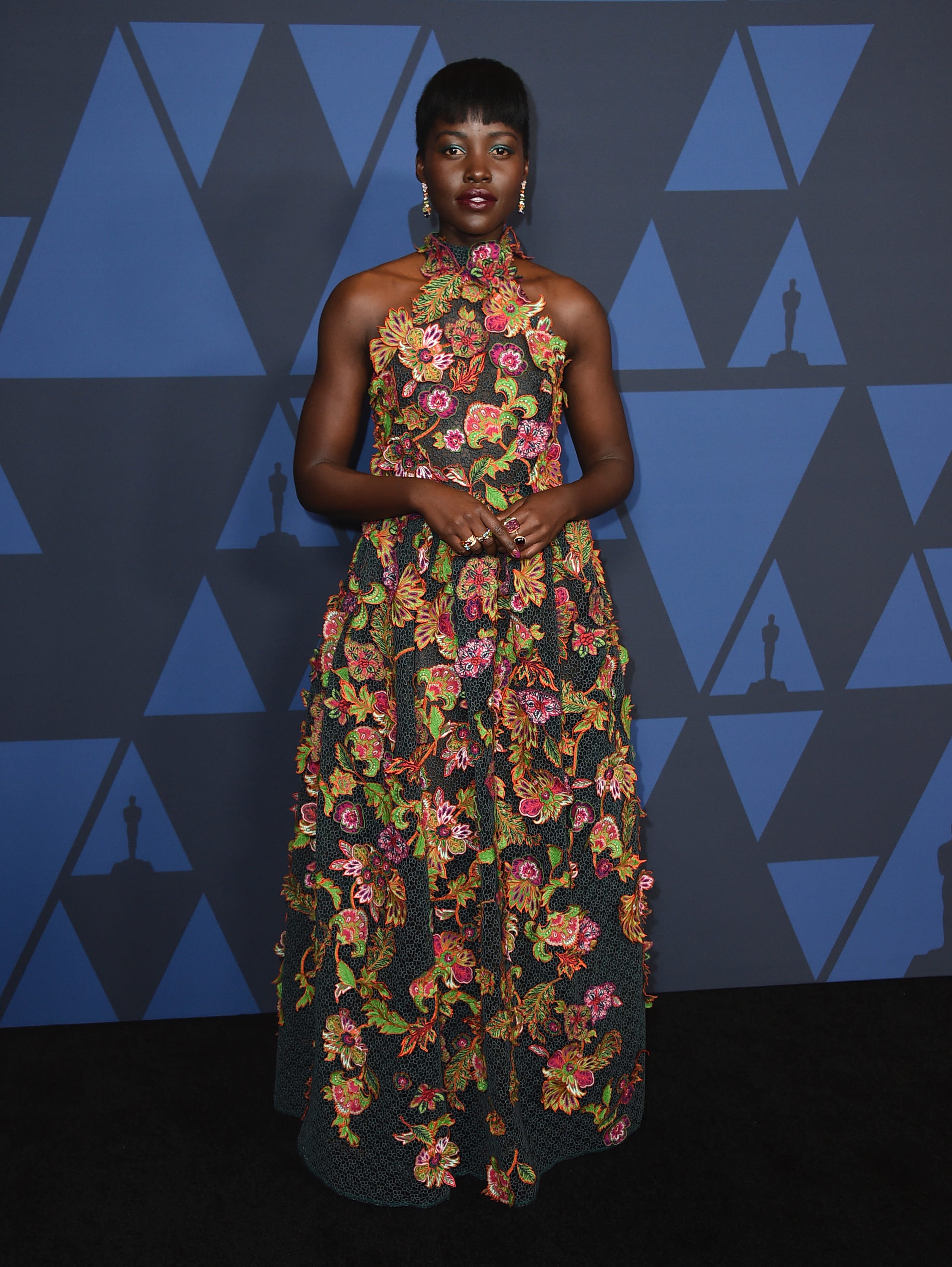 Jordan Strauss/Invision/APLupita Nyong’o at the Governors Awards in October 2019.

She also wore green eye makeup to match her dress. 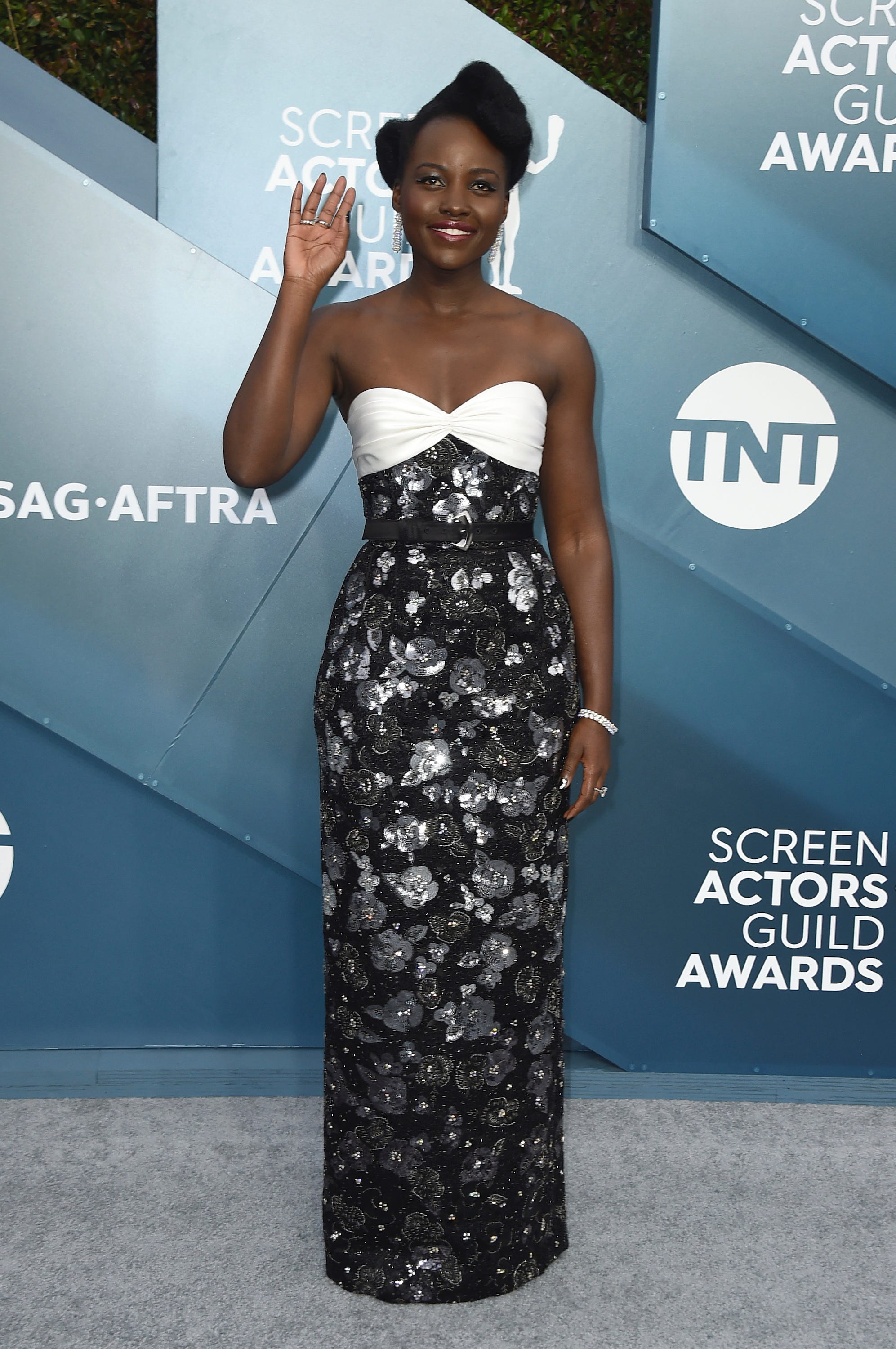