An alarmingly disproportionate number of black Americans are dying from the coronavirus, more and more research shows 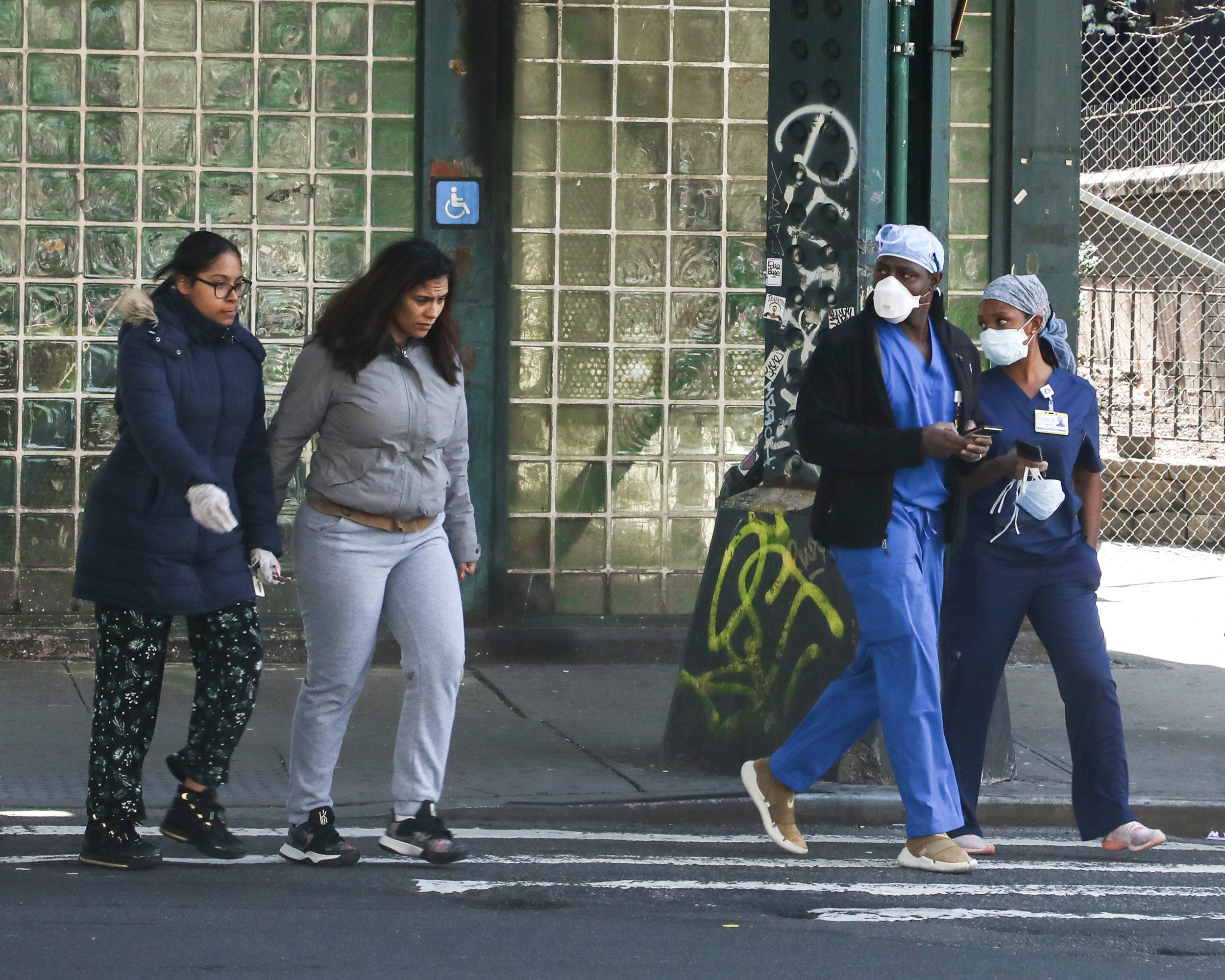 More and more evidence is revealing the disproportionate toll COVID-19 is taking on black Americans.

A new report published Tuesday by researchers at amfAR, a non-profit focused on AIDS research, found that US counties in which at least a 13% of the population is black account for 58% of COVID-19 deaths and 52% of cases nationwide.

“Crisis can exacerbate existing inequalities, which is demonstrated in higher rates of hospitalisation and death among certain populations in many countries,” Tedros Adhanom Ghebreyesus, director-general of the World Health Organisation, said in a press briefing on Wednesday.

Racial disparities in some state-level data are even more stark. In Georgia, 83% of coronavirus cases requiring hospitalisation were black patients, though only 32% of the state’s population is black. In Richmond, Virginia, all but one of the people who died of COVID-19 were black as of last Wednesday.

“We must address this now and in the long term by prioritising diagnosis and care for those who are most at risk, Tedros said, adding, “we cannot end the pandemic until we address the inequalities that are fuelling it.”

Black Americans are getting sick and dying at higher rates

The amfAR report examined 3,100 US counties, and found that 677 of them – 22% – were “disproportionately black” (meaning at least 13% of residents are black). Based on publicly collected data from January through mid-April, the researchers found that more than half of the US’s coronavirus deaths and cases were reported in those counties.

Other data from around the US supports the report’s conclusions. Though not all states and cities are tracking the races of coronavirus patients, those that do are finding that black Americans die from COVID-19 in alarmingly disproportionate numbers. 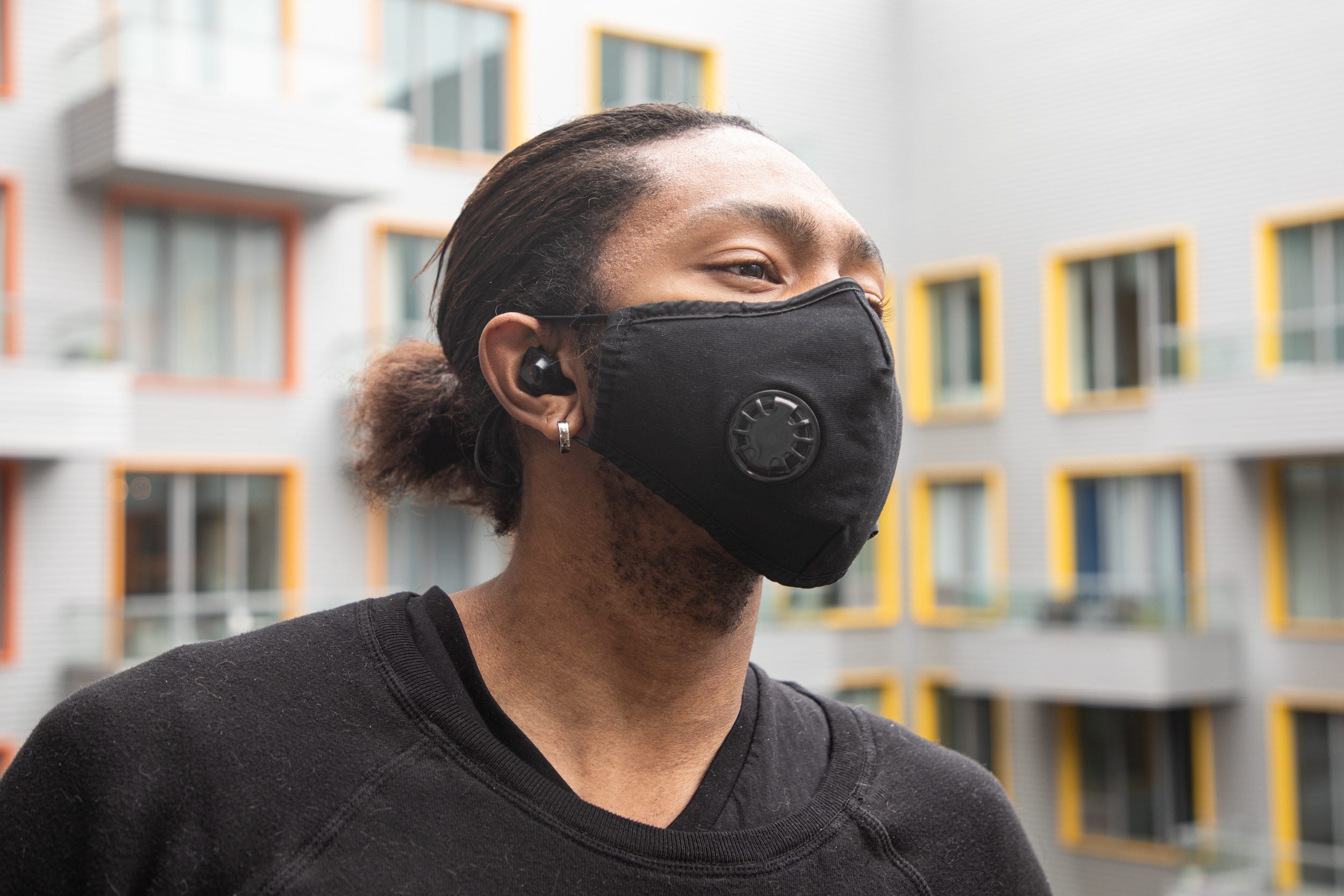 In Michigan, black people make up 14% of the state population but represent 41% of the coronavirus deaths, according to state health officials.

Illinois’s numbers are similar: of the state’s 2,974 deaths, 998 of them were black patients, about 34% of the total fatalities. The state has about 1.8 million black residents, or about 14% of the population.

In North Carolina, where the population is 21% black, 35% of the state’s COVID-19 deaths were black patients.

About 28% of coronavirus fatalities in New York City, meanwhile, were black patients, and 34% were Hispanic, according to the New York State Department of Health. 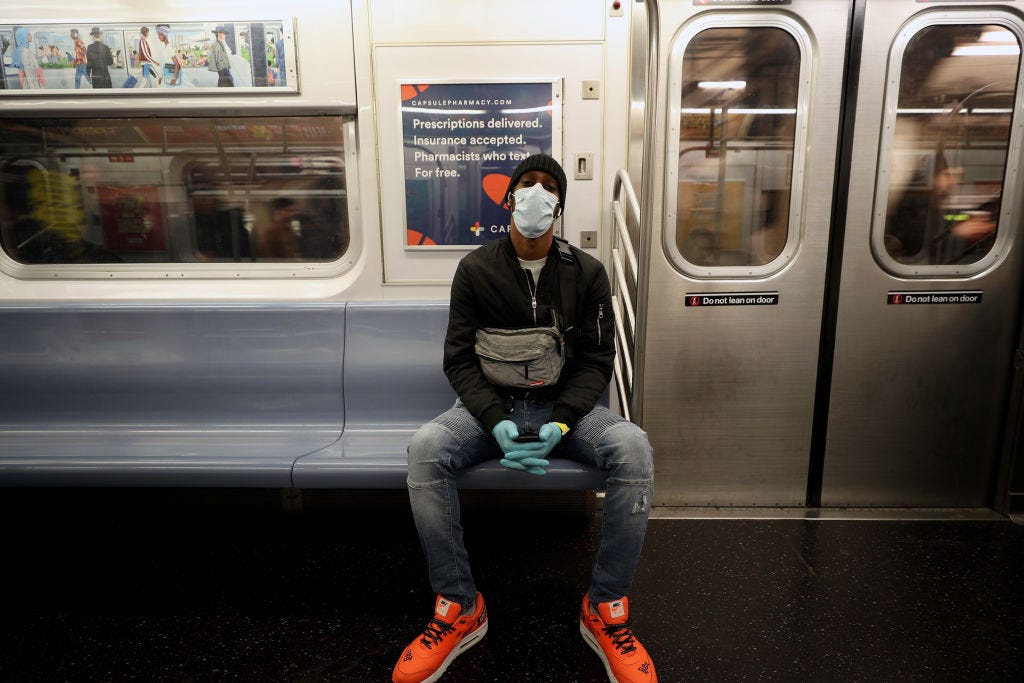 In Richmond, Virginia, 48% of the population is black, but these residents account for nearly 60% of Richmond’s coronaviruses cases.

“The fact that more African Americans in the city are dying of this, that’s not something new that’s specific to COVID-19,” Danny Avula, the director of Richmond and Henrico Health Districts, previously told Insider. “That’s a revelation of the underlying inequities that we have always dealt with, and this is just one more thing that’s bringing that to the forefront.”

Two reports published in April from the Centres for Disease Control and Prevention show the extent to which black Americans account for more hospitalizations than they should based on their share of the US population.

The first report, from April 17, found that 33% of the US’s hospitalized COVID-19 patients are black, though black people make up 18% of the overall US population. 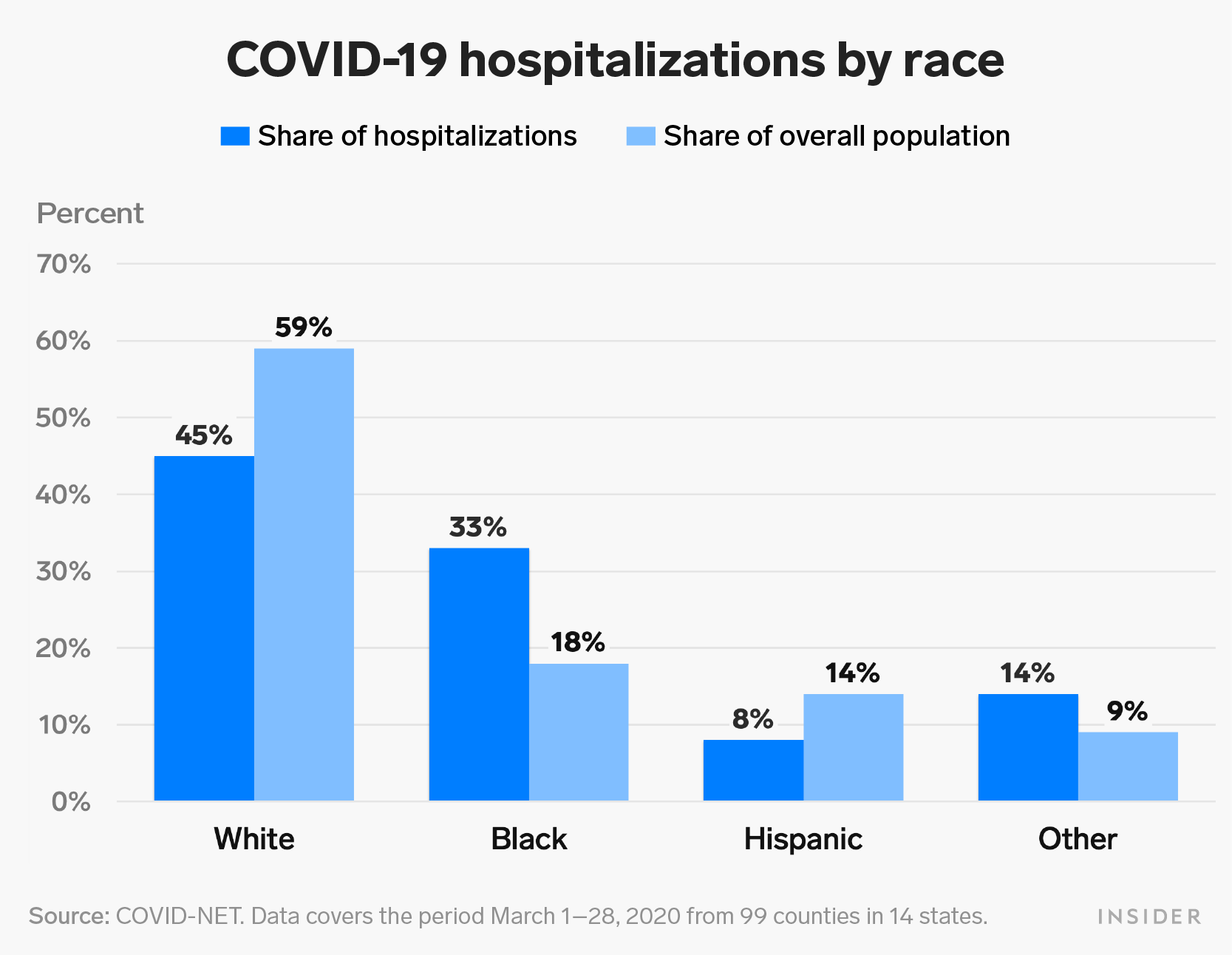 A second report from the agency, published April 29, showed an even higher gap in Georgia.

The CDC found that 83% of people hospitalized with COVID-19 in the state during March were black, even though only 32% of the state’s population is black. 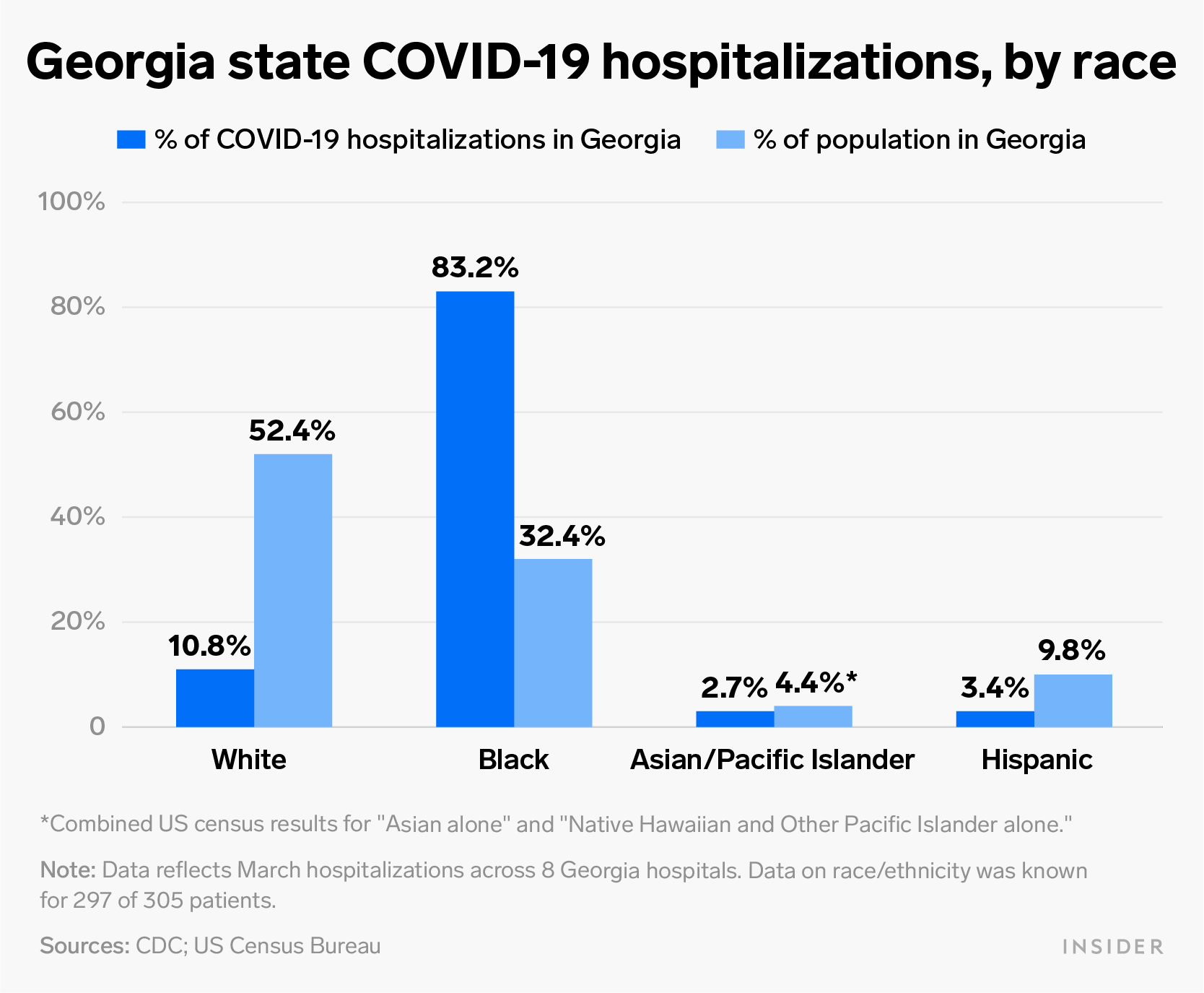 Dr. Anthony Fauci, director of the National Institute of Allergy and Infectious Diseases, has said the reason the coronavirus has hit black communities hardest has to do with the prevalence of “underlying medical conditions – the diabetes, the hypertension, the obesity, the asthma.”

According to the CDC, more than 89% of Americans hospitalized with COVID-19 have had underlying health problems. 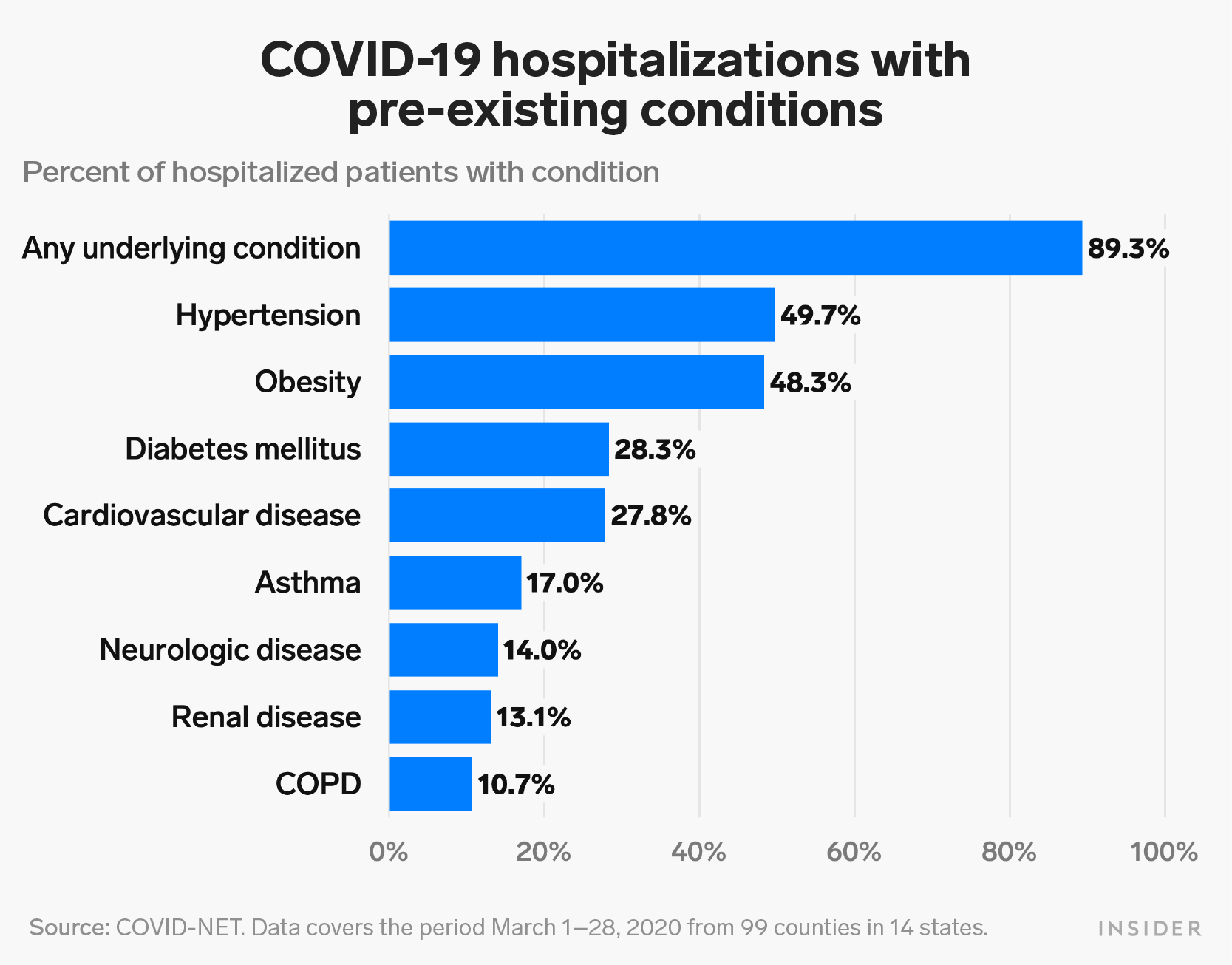 The most commonly reported conditions were hypertension and obesity, followed by chronic lung disease (including asthma and chronic obstructive pulmonary disease), diabetes, and heart disease.

The amfAR report noted that disproportionately black counties in the US have higher rates of underlying health conditions like diabetes and heart disease. Those counties also experience more air pollution, which is linked to asthma.

Hilary Brueck and Tyler Sonnemaker contributed reporting to this story.