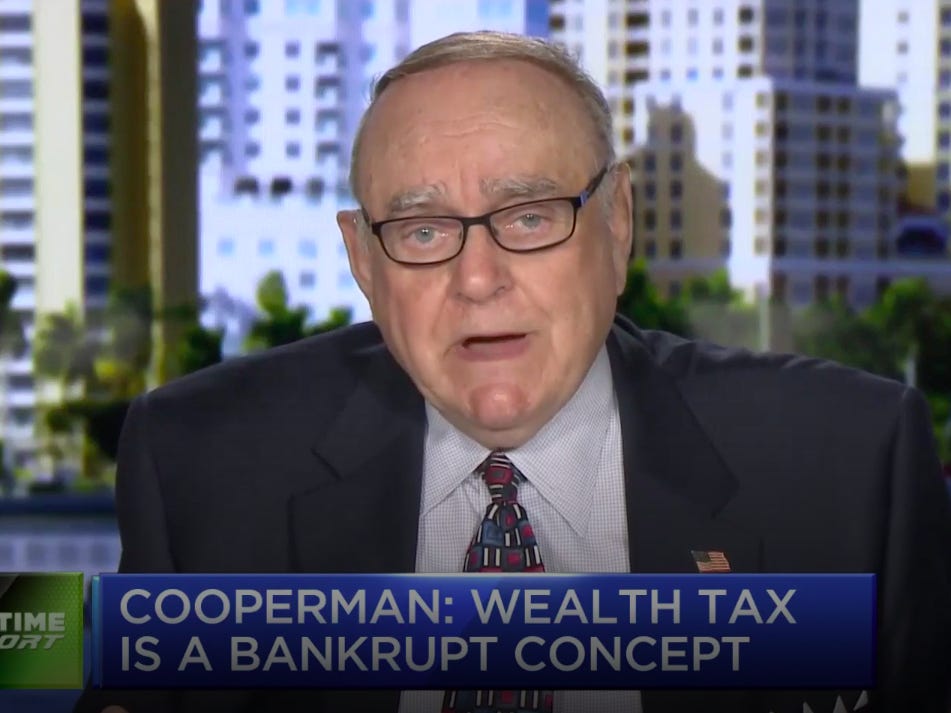 Billionaire Leon Cooperman has lodged yet another entry in his ongoing back-and-forth with Sen. Elizabeth Warren over a wealth tax. He added a new wrinkle to it today: Eliminating the Department of Education instead, saying the country doesn’t need to progress in that area anymore.

In a CNBC interview on Friday, Cooperman again criticized Warren and her chief policy item. The war of words between the two stretches back years. Most recently, Warren invited Cooperman to testify in a Senate Finance hearing on taxes, and after Cooperman declined, the Massachusetts senator accused him of being “too frightened” to appear. (Pro-wealth tax millionaire Abigail Disney testified instead.)

“I do believe in the progressive income tax structure; I do believe rich people should pay more,” Cooperman told CNBC’s Squawk Box, before adding, “the wealth tax makes no sense to me, for lots of reasons.” He noted that wealth taxes have been eliminated in almost all countries where they’ve been introduced.

“We should eliminate the Department of Education,” Cooperman said. “We don’t need a $100 billion cabinet to tell the states how to educate their children. Segregation is over, okay.”

Cooperman’s remarks on segregation are belied by data and recent research, however. A February 2020 report from the left-leaning Economic Policy Institute found American schools continue to be “heavily segregated by race and ethnicity,” with Black children five times more likely to attend segregated schools than their white peers, and more than twice as likely to attend high-poverty schools. Studies in states like Massachusetts have shown that, even as school districts grow more diverse, segregated schools have grown.

Even ultra-liberal and ultrawealthy New York City is still struggling to desegregate its schools, which are, as The New York Times reports, some of the most segregated in the country. Current Mayor Bill de Blasio enacted some reforms meant to address this in the final year of his second term, but, as the Times reports, it left the details of future reforms to his predecessor.

Cooperman also addressed Warren’s critiques of him owning stock in student-loan servicer Navient, which Warren has repeatedly spoken out against and wants the government to fire as a major servicer of federal debt. “Thank god” he owned the stock, he said, since it’s doubled.

Ultimately, Cooperman said he thinks that Warren’s wealth tax is “probably” unconstitutional. “I don’t know her. I don’t vote in Massachusetts, but I think she’s very wrong-minded,” he said.

Neither Warren nor Cooperman immediately responded to Insider’s requests for comment.

In her Tuesday hearing, Warren said her invitation to Cooperman “is how democracy is supposed to work – citizens and stakeholders discuss ideas, and then our elected representatives vote.” She added: “I’m disappointed that Mr. Cooperman decided he was more comfortable taking softball questions on cable news than subjecting his views to debate in the US Senate.”