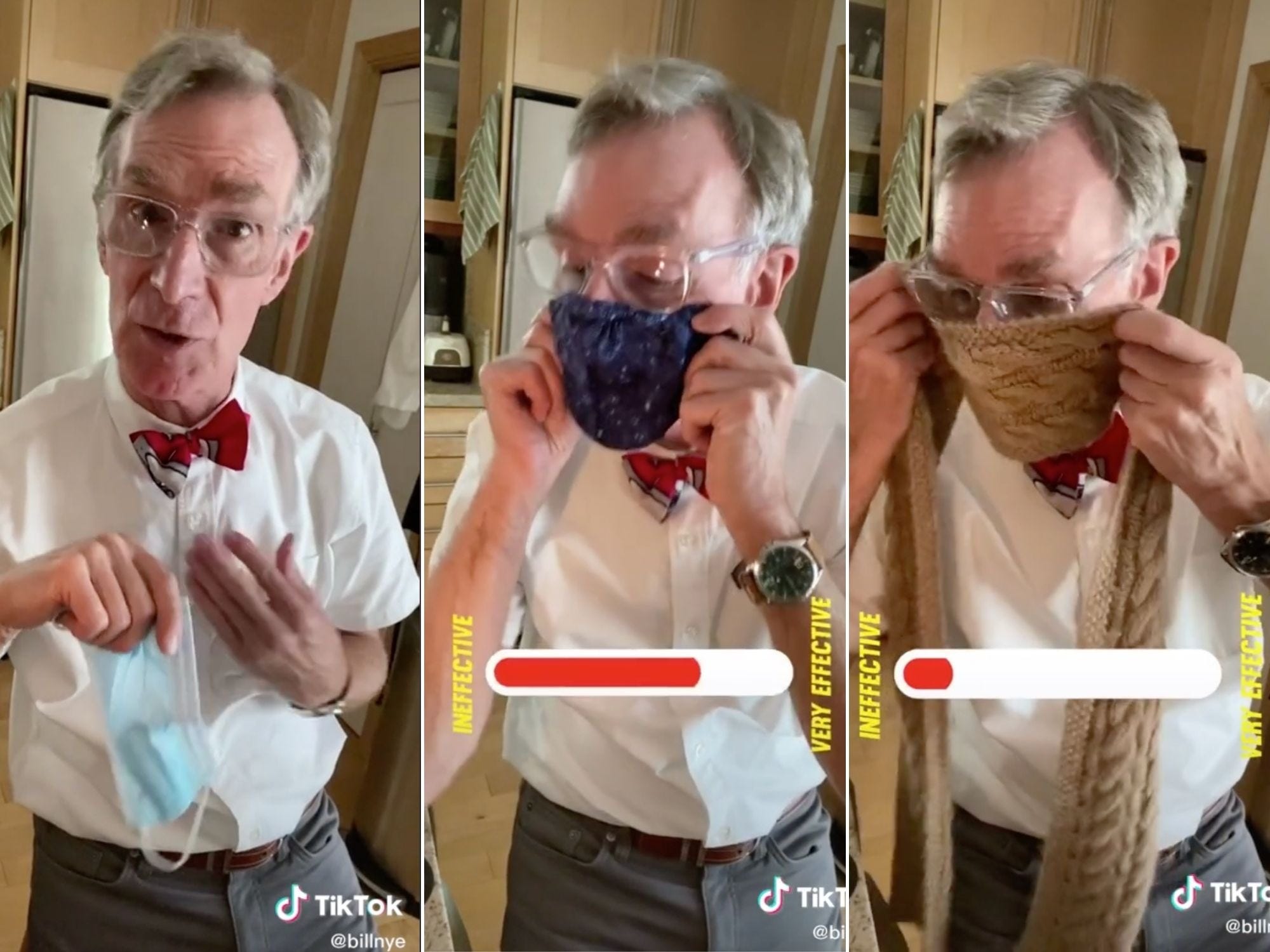 Bill Nye/TikTokBill Nye showed how a homemade face mask is a more protective face covering than a knit scarf.

Bill Nye the Science Guy turned to TikTok to visually demonstrate the power of wearing a face mask in public.

“Why do people in the scientific community want you to wear a face mask when you’re out in public? Please, consider the following,” Nye said.

Face masks, Nye explained, “prevent particles from getting into the air and then into your respiratory system.”

“Blocking the movement of air is an old trick,” Nye continued.

The beloved science TV personality first held a knitted scarf over his mouth and attempted to blow out a lit candle in front of him.

Next, Nye covered his mouth with what he described as a homemade face mask, constructed with two layers of cloth and a pipe cleaner to fit the bridge of one’s nose. He then audibly exhaled and attempted to blow out the candle in front of him, to no avail – demonstrating the ability of the homemade face covering to act as a barrier.

“It blocks the movement of air very effectively,” Nye said. “If you’re wearing one of these, you’re protecting yourself and those around you.”

Nye followed up by posting an additional TikTok, where he demonstrated how an N95 respirator mask also effectively blocks particles of air.

“These are made to block particles in the medical environment and when you’re out mowing the lawn,” Nye said.

Nye concluded the video by urging viewers to wear face coverings not only to protect themselves, but also to protect people around them.

“Everybody, this is literally a matter of life or death,” Nye continued. “So when you’re out in public, please, wear a mask.”

Nye’s videos have since circulated beyond TikTok, and his message was shared by New York Gov. Andrew Cuomo on Twitter, who wrote: “Listen to Bill Nye.”

TikTok has become an increasingly popular platform for scientists, doctors, and other health experts to debunk and share information about COVID-19

Health and science experts have taken to the video-sharing app to spread vital information and debunk myths about wearing personal protective equipment (PPE) and tips for making face coverings more comfortable to wear.

For example, in April, Dr. Karan Raj, a UK National Health Service doctor, made a trending TikTok that showed how latex gloves can facilitate (not prevent) the spread of germs if they’re not worn correctly.