Here's what Bill Gates once said we needed do to prevent a crisis like the coronavirus, and what we need to do to stop the next pandemic 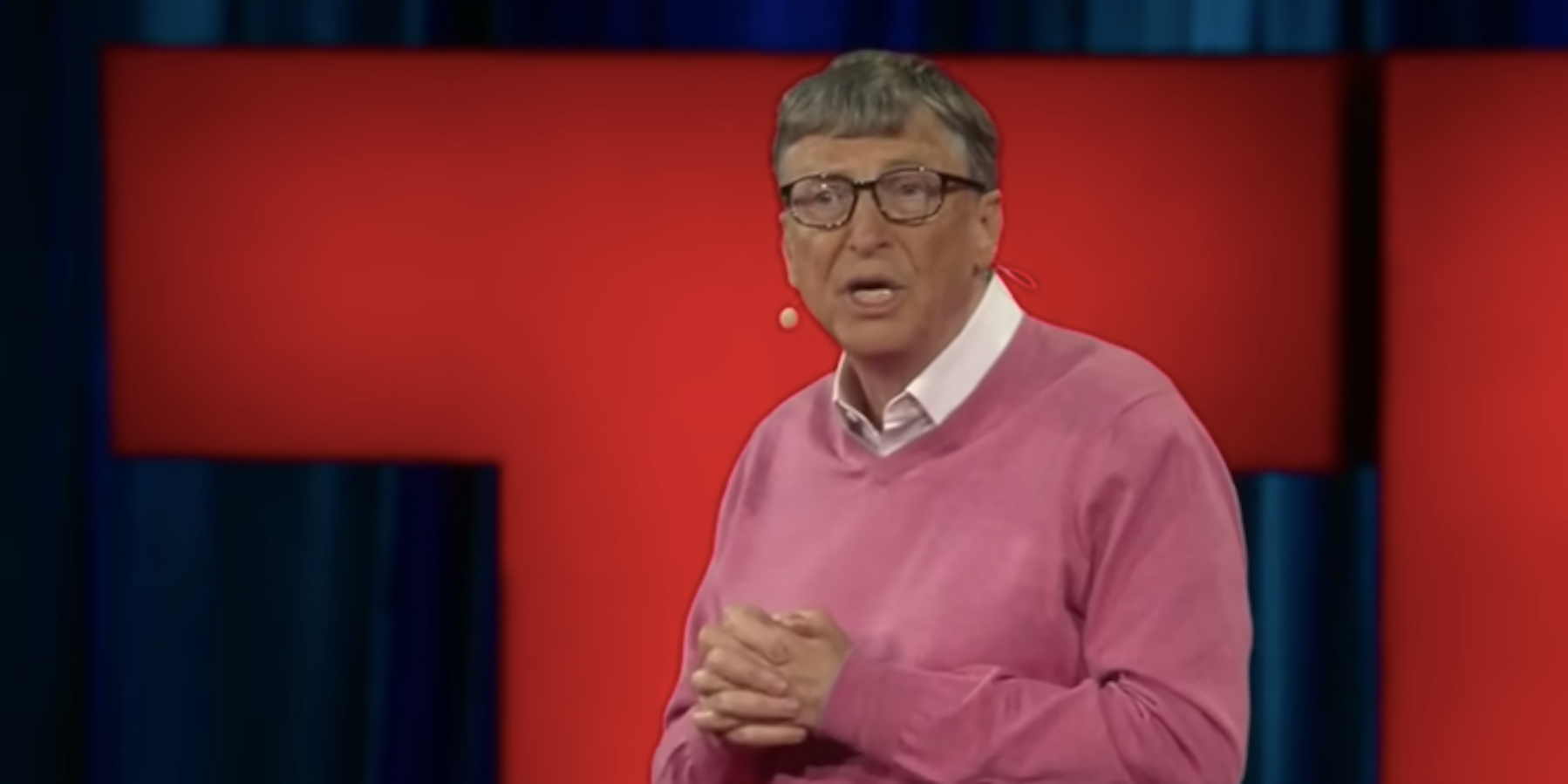 YouTube/TEDBill Gates during his 2015 TED Talk ‘The next outbreak? We’re not ready.’

This week, as the coronavirus pandemic worsened, Bill Gates pointed to a 2015 TED talk he gave when people asked him what the world should do now to stop anything similar happening again.

In the talk, he said that the world was “not ready for the next epidemic” – an observation that appears to have been proved correct in the past weeks.

He said that the world needed to invest much more to increase testing and the production of vaccines and medicines.

Gates pointed to the talk in a Reddit Ask Me Anything (AMA) session on March 18, in response to the question of how to prepare for the next pandemic. In 2015, he urged investment in healthcare and medicine. Instead the US did the opposite and cut funding to virus-fighting agencies.

Reddit user KawiNinja asked: “In your opinion, after this pandemic comes to a close, however long that may be, what should be the first step we as a global community take so that we are better prepared for the next pandemic?”

Gates has been active in the fight against global disease in the years since that 2015 talk, but he still that speech out on Wednesday as giving the best answer.

You can watch the talk here:

To the question on Reddit, he responded: “The TED talk I did in 2015 talked about this. We need to have the ability to scale up diagnostics, drugs and vaccines very rapidly. The technologies exist to do this well if the right investments are made.”

“Countries can work together on this. We did create CEPI = Coalition for Epidemic Preparedness Innovation which did some work on vaccines but that needs to be funded at higher level to have the standby manufacturing capacity for the world.”

In the 2015 talk, Gates said viruses pose the “greatest risk of global catastrophe” when compared to other threats to humanity.

“If anything kills over 10 million people over the next few decades, it’s most likely to be a highly infectious virus rather than a war. Not missiles, but microbes.”

“We’ve invested a huge amount in nuclear deterrents, but we’ve invested very little in a system to stop epidemics. We are not ready for the next epidemic,” he said. 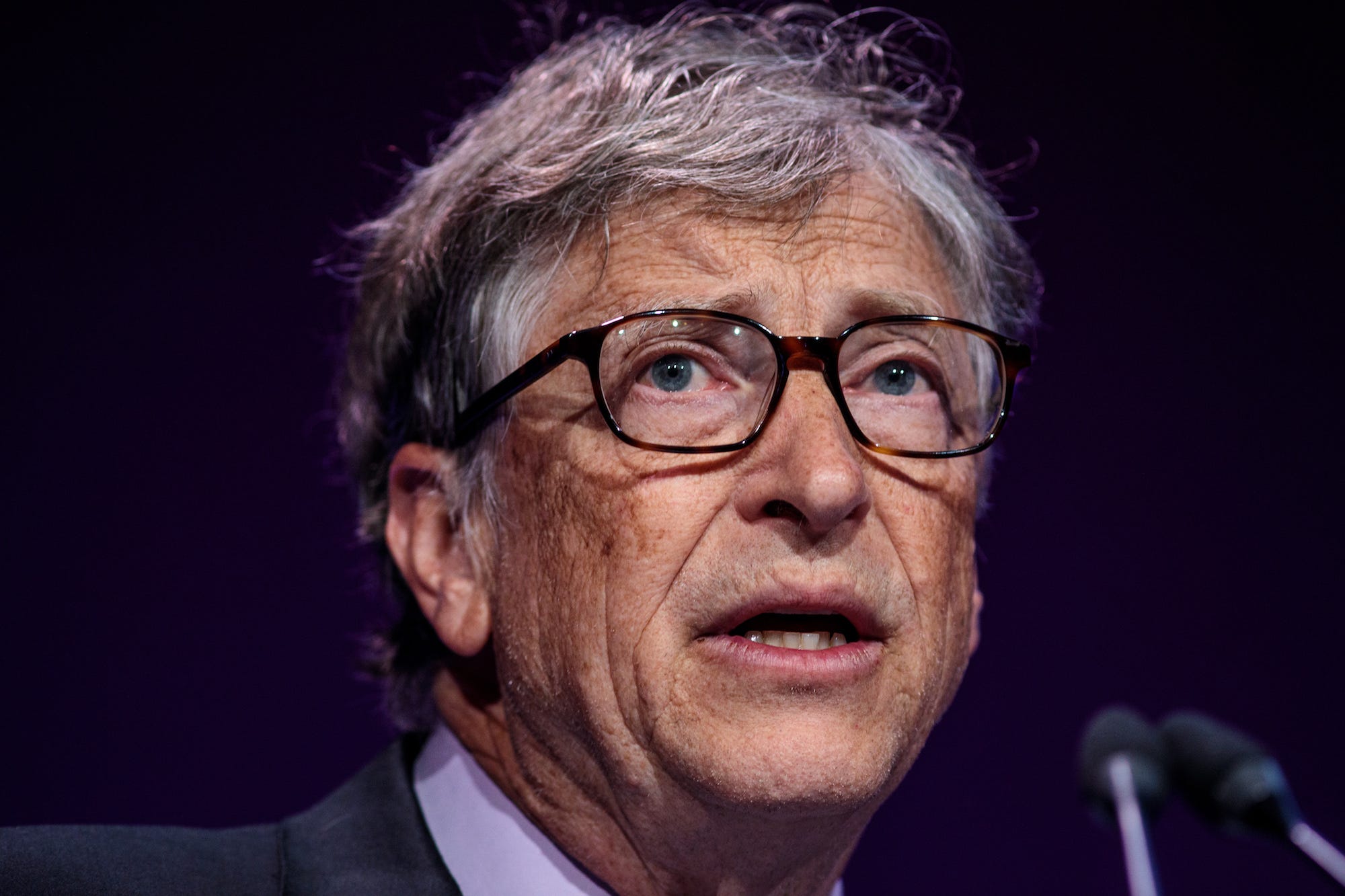 Jack Taylor/Getty Images)Bill Gates gives a talk at the Malaria Summit in London, UK, in April 2018.

He said that modern technology like mobile phones, which have enabled mass communication like never before, should in theory help build better response systems to deal with outbreaks.

But he said that the world needs strong health systems in poor countries to identify outbreaks early, and a medical reserve corps for when they happen.

“We then need to pair those medical people with the military, taking advantage of the military’s ability to move fast, do logistics, and secure areas.”

Gates said that the best lessons to prepare for an epidemic can be learned from war. He noted that soldiers work full-time, ready and waiting to respond to a crisis, and that countries maintain soldiers in reserve which they don’t need right at that moment. He also noted that NATO has mobile units and hold regular training.

He also said the world needs to run simulations of outbreaks, and perform a lot more advanced research and development for vaccines and diagnostics.

“I don’t have an exact budget for what this would cost, but I am quite sure it’s very modest compared to the potential harm.”

He pointed to a World Bank study that estimated a worldwide flu epidemic would reduce global wealth by over $US3 trillion dollars and cause millions of deaths.

The coronavirus is now hammering the global economy, and has already prompted in excess of $US1 trillion of emergency stimulus measures.

He said such investments offer benefits beyond just preparedness for an epidemic, noting that it would give many more millions of people access to better healthcare.

“There’s no need to panic. We don’t need to afford cans of spaghetti or go down to the basement. But we need to get going. Because time is not on our side,” he said. 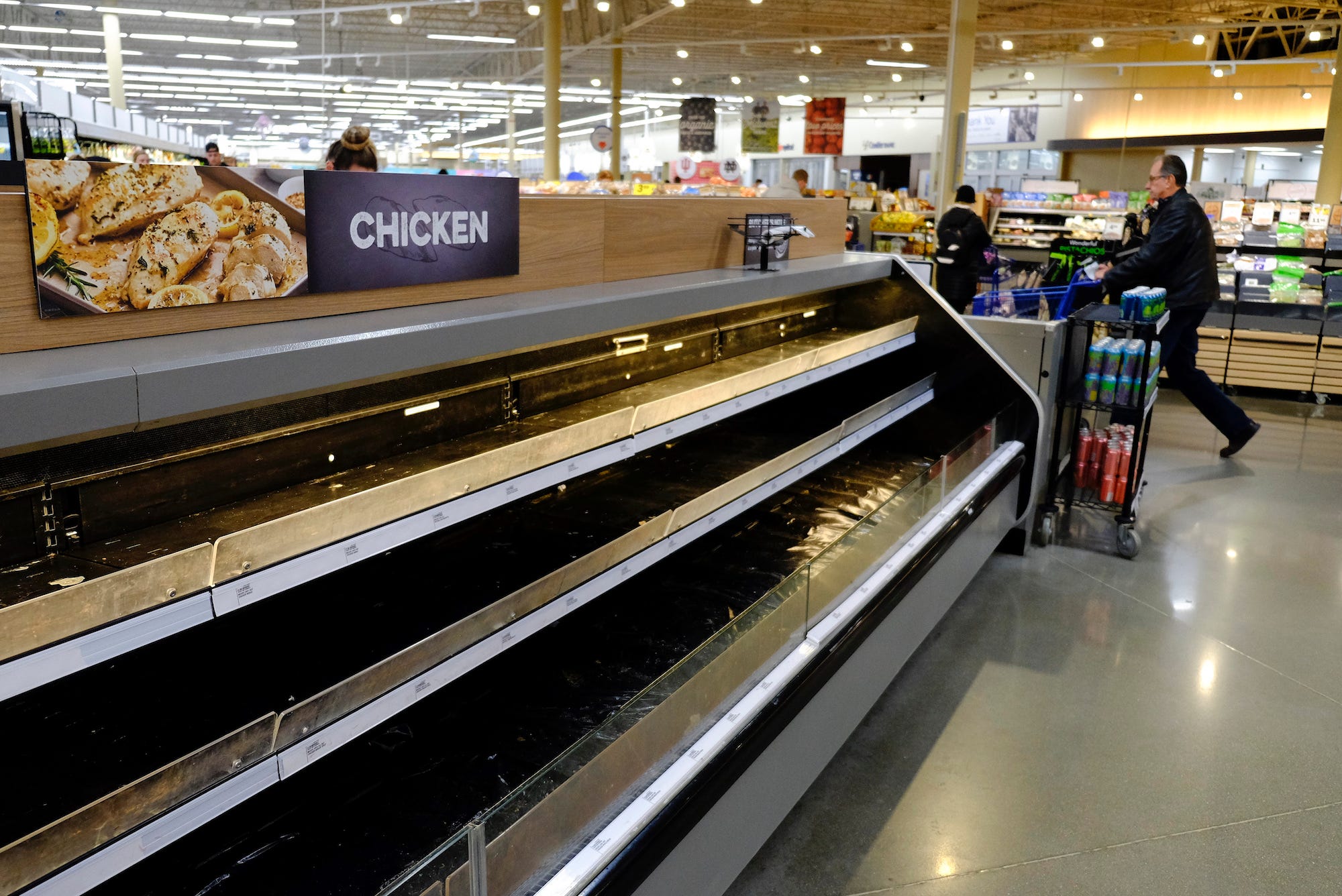 Darron Cummings/APEmpty shelves are seen at the Meijer store on Monday, March 16, 2020, in Whitestown, Indiana, amid the coronavirus outbreak.

“In fact, if there’s one positive thing that can come out of the Ebola epidemic, is that it can serve as a early warning, a wake up call, to get ready. If we start now, we can be ready for the next epidemic.”

Gates was speaking after the 2014 Ebola outbreak, which killed more than 11,000 people in Guinea, Liberia, and Sierra Leone, and said there was lessons to be learned. He called the handling of Ebola “a global failure.” 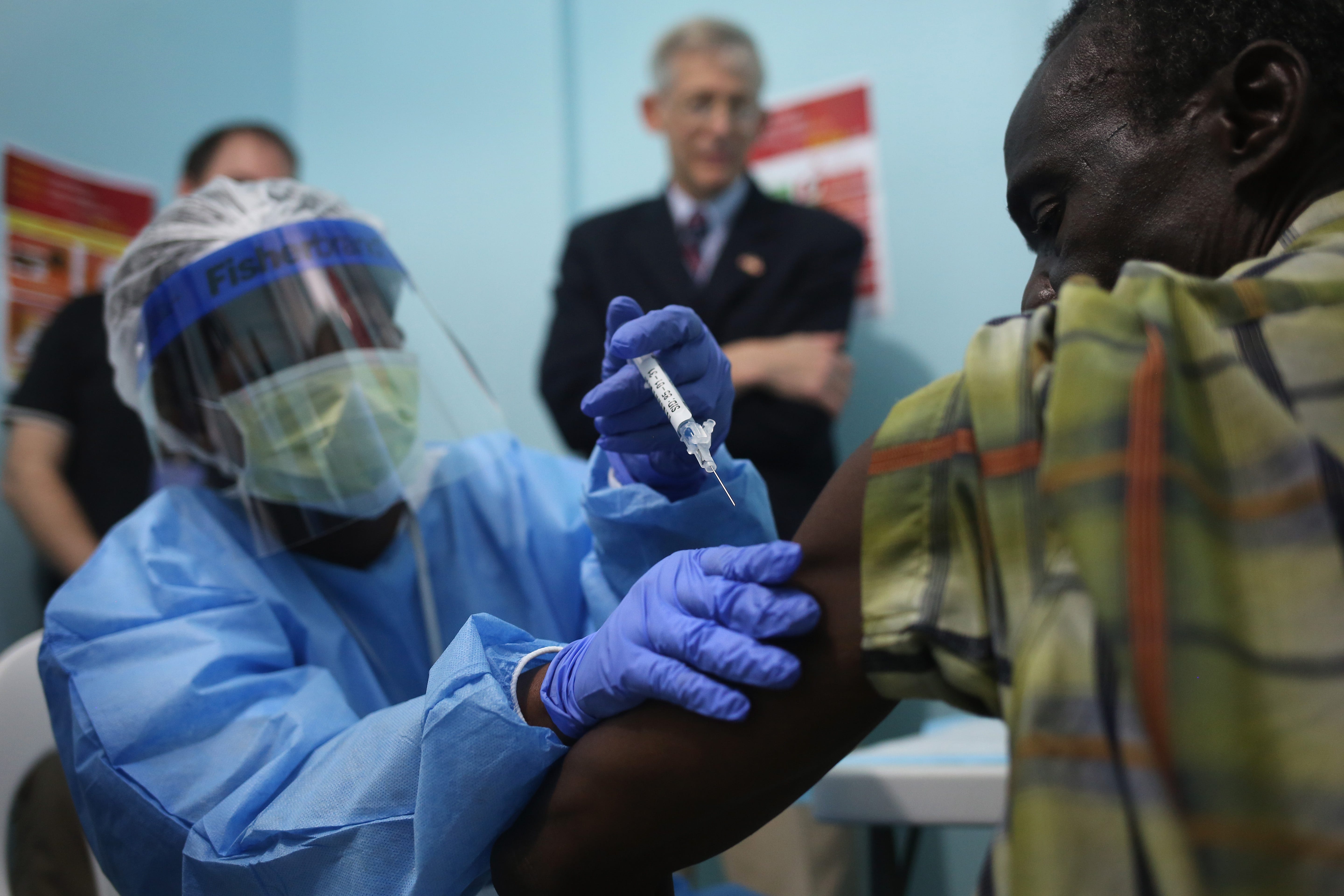 John Moore/GettyA nurse administers an injection on the first day of the Ebola vaccine study being conducted at Redemption Hospital, formerly an Ebola holding centre, on February 2, 2015 in Monrovia, Liberia.

Among the “pretty obvious missing pieces” were the logistics of getting medical workers, volunteers, and epidemiologists to those countries quickly to research the disease, its spread, and possible treatments.

He praised local healthcare workers for stopping the spread and said it was “just luck” that the outbreak was not focused in urban areas. He warned the world might not be as lucky next time.

“The failure to prepare could allow the next epidemic to be dramatically more devastating than Ebola.”

Gates’ warnings about the next epidemic were prescient, given what we now know about the coronavirus

Gates warned that other viruses could spread more easily than Ebola, which severely affected the health of those infected, typically leaving them bedridden.

“You can have a virus where people fell well enough that they get on a plane, or they go to a market,” he said.

This has been the case with the coronavirus, where people can have it but be asymptomatic. It has now spread to at least 160 countries and territories. 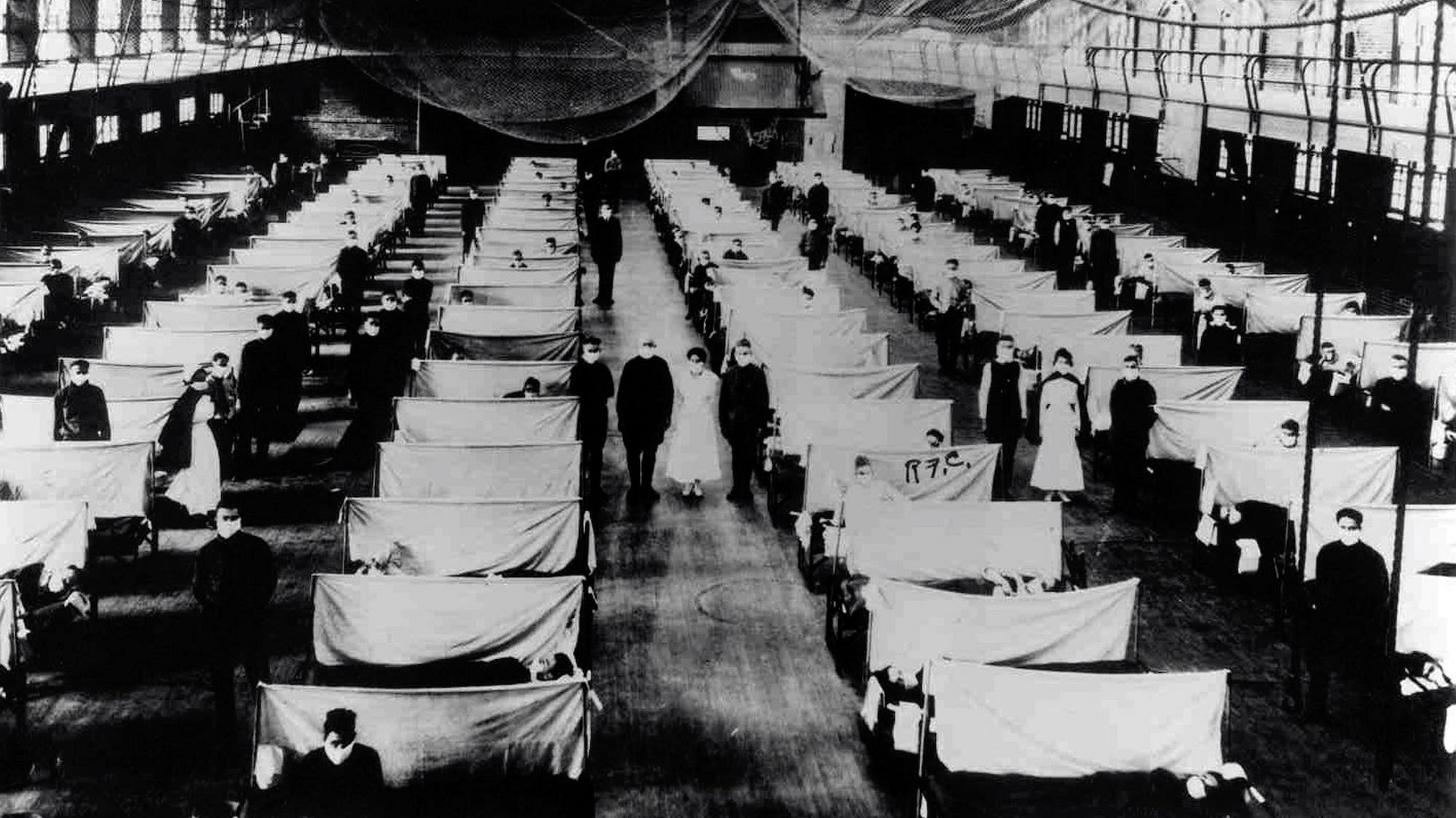 Universal History Archive/Universal Images Group via Getty ImagesImage shows warehouses that were converted to keep the infected people quarantined during the 1918 flu in the US.

That outbreak infected a third of the world’s population and is thought to have killed between 50 million and 100 million people – but Gates said that current science and technology gave the world the chance to build a “really good response system.”

Gates has issued other warnings about a pandemic

Gates, who started the disease-fighting Bill and Melinda Gates Foundation and advocates for global health reform, has given other warnings about a serious pandemic.

Gates wrote for Business Insider in 2017 that the world is not prepared for a serious outbreak.

In 2018, he warned that the next pandemic was imminent said it would arise and spread within the next decade. 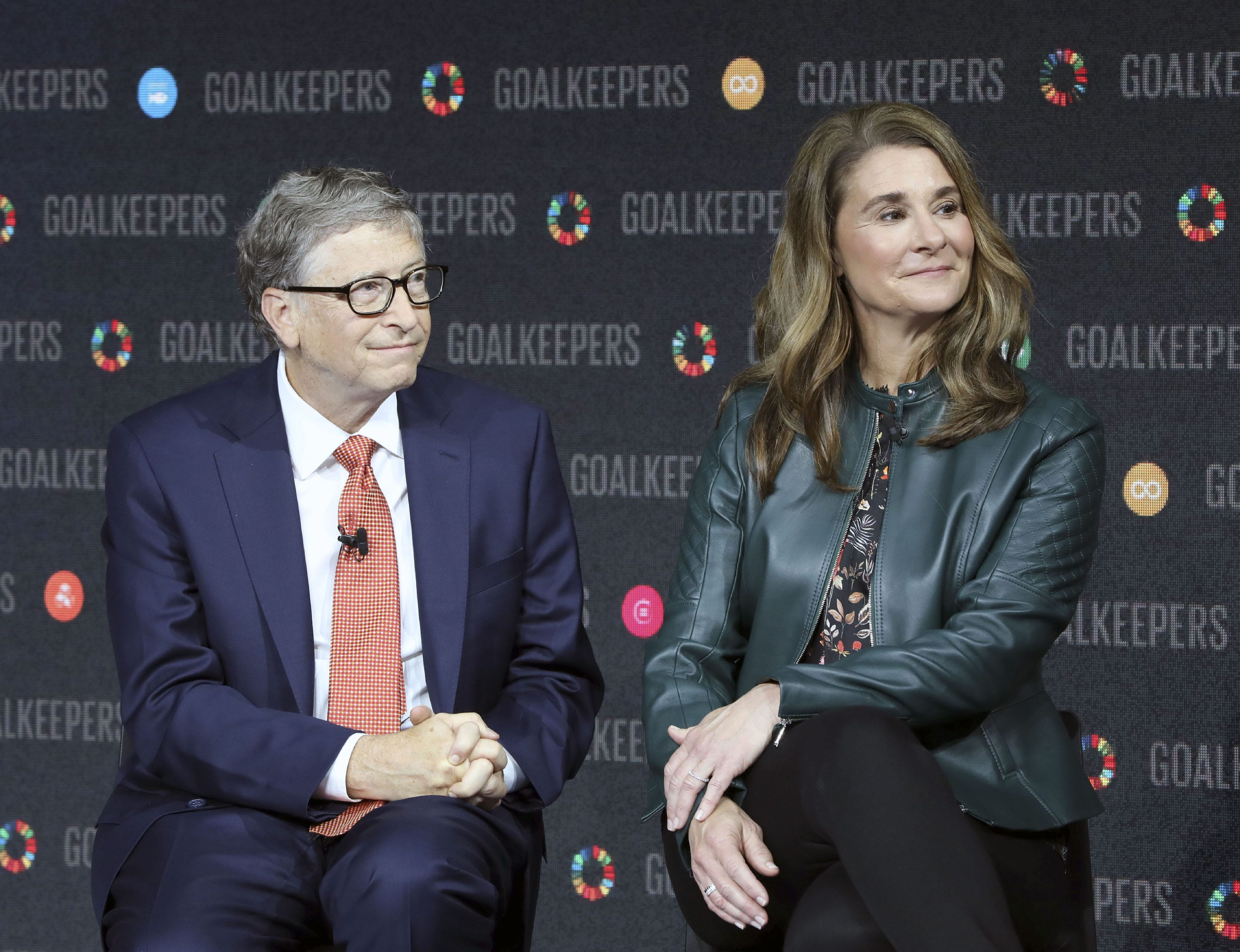 And in an op-ed for the New England Journal of Medicine in light of the coronavirus in February, he wrote that countries need to work together to share information, that governments need to better fund the manufacture of vaccines, and that richer countries need to help poorer health systems.