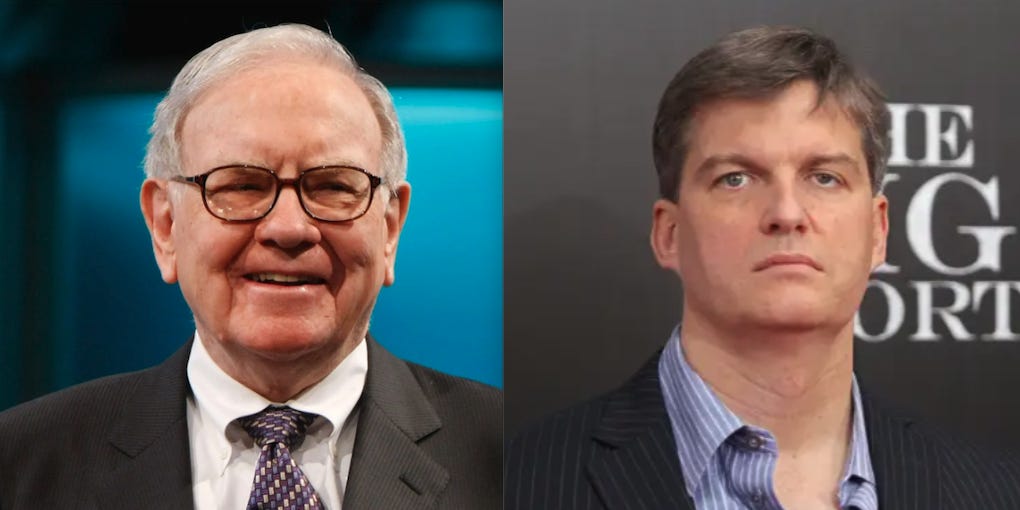 Warren Buffett praised Apple, one of his most lucrative bets ever and easily the biggest holding in Berkshire Hathaway‘s stock portfolio, as a “jewel” in his latest annual letter. Yet the investor only realized the iPhone maker’s worth and bought a stake in 2016 – nearly two decades after Michael Burry described it as a “Buffett stock.”

Buffett famously seeks to invest in undervalued companies with strong consumer brands, robust finances, and high-quality management. Burry, whose billion-dollar bet against the US housing bubble was chronicled in the book and movie “The Big Short,” recognized that Apple boasted all of those attributes in the late 1990s.

Burry, who now runs Scion Asset Management, studied Buffett closely as a young investor and incorporated the Berkshire chief’s teachings into his own research. He shared his stock picks and debated their merits on the Silicon Investor forum, where he posted more than 3,000 times during the dot-com era.

One of Burry’s favorite stocks was Apple, as it showed many of the characteristics that Buffett looks for in a business.

“Apple, boy, everyone is living in the past on this one,” he posted in April 1999, when Apple’s market capitalization was under $US6 ($8) billion, compared to over $US2 ($3) trillion today. “Management is now great. The product is now very good, but even more importantly the marketing is now great.”

“No one is crediting Apple, but to me, it has the markings of a value stock and potential Buffett-like stock,” he said in another post that month.

“A real cash machine of late, trading at a mid-single digit multiple of cash flow, with a great recovery in terms of operating efficiency,” he continued. “A great brand name with proprietary advantages and mindshare. Subtract out the cash and it was recently trading at about 10 times earnings.”

The investor doubled down on his position in a May 1999 post. “Apple’s now a Buffett stock thanks as much to its management as its brand,” he said. Apple co-founder Steve Jobs had returned as CEO in 1997, hired future CEO Tim Cook in 1998, and launched the beloved iMac that year as well.

Burry trumpeted the company as “incredibly undervalued” given its cash generation, market opportunity, solid balance sheet, and limited downside in another post in May 1999.

Moreover, he pointed to Apple’s pricing power and consumer brand as evidence it was a Buffett-worthy stock in a July 1999 post.

“Buffett’s point has always been that in the long run it is the consumer franchises that last,” Burry said.

Buffett loves consumer brands, as they allow their owners to hike prices and serve as “moats” that keep competitors at bay. Some of the Berkshire Hathaway chief’s biggest investments are household names such as American Express, Coca-Cola, and Kraft Heinz.

The investor has described Apple as a consumer-product company that uses technology, instead of a technology company, to explain why he invested despite his historical aversion to tech stocks. He lauded it as “probably the best business” he knows in the same interview.

While Burry beat Buffett to Apple by more than 15 years, he didn’t fully capitalize on his early insight. The budding investor sold his shares after they jumped between 50% and 75% in a matter of months, he disclosed in a July 1999 post.

Burry reinvested at some point over the next 15 years. His Scion fund’s biggest position in the first quarter of 2016 was Apple – it owned 75,000 shares worth $US8 ($10) million, SEC filings show.

Yet Burry sold the following quarter. If he had held on, Scion’s stake would have more than quadrupled in value to $US36 ($46) million today.

Regardless, Burry deserves kudos for unearthing a gem. If Buffett bought Apple back when Burry realized it was his kind of company, the Berkshire chief would have made far more than his current $US80 ($103) billion gain on the investment.