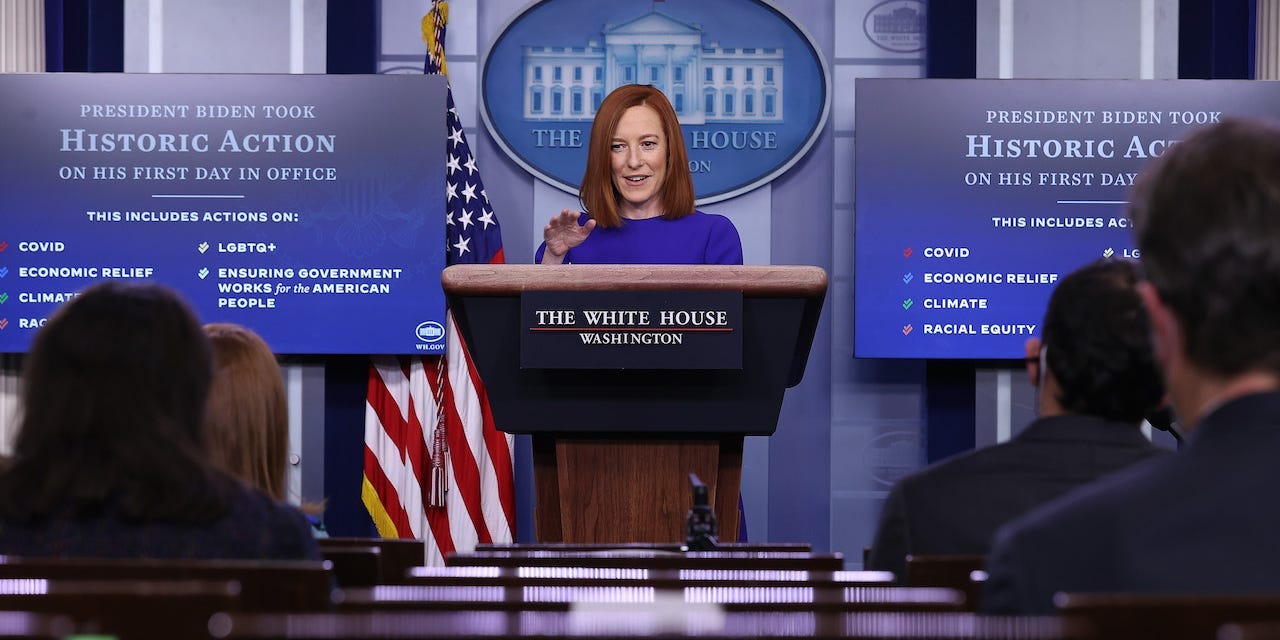 On her first day in office, the White House press secretary,Jen Psaki, pledged to bring “truth and transparency back to the briefing room,” saying she had a “deep respect for the role of a free and independent press.”

But less than two weeks into President Joe Biden’s administration, reporters are raising concerns about White House press office staffers trying to get them to give advance notice on which questions they plan to ask at briefings, The Daily Beast reported.

Some raised concerns that asking journalists for their questions ahead of time could give the impression that the media is working in conjunction with the Biden administration, allowing officials time to craft good answers.

For years, critics on the right have accused the media of being too left-leaning and not critical enough of Democratic administrations. A recent Fox News report argued reporters’ questions were too easy during Psaki’s first press briefing, comparing them with briefings during President Donald Trump’s administration, when White House press secretaries rarely held briefings and often refused to take questions.

According to The Daily Beast, during a White House Correspondent’s Association Zoom call last Friday, reporters brought up the issue of Psaki’s team’s trying to coax their questions out of them ahead of time.

Multiple sources told The Daily Beast that WHCA leaders advised reporters to push back or not respond to such requests.

“While it’s a relief to see briefings return, particularly with a commitment to factual information, the press can’t really do its job in the briefing room if the White House is picking and choosing the questions they want,” one unnamed White House correspondent told The Daily Beast.

“That’s not really a free press at all.”

Other reporters like Politico’s Tara Palmeri also criticised the White House press office in response to The Daily Beast’s story,tweeting, “To everyone asking why this matters: If Psaki doesn’t like your question, she doesn’t call on you.”

Two people told The Daily Beast there was precedence for this kind of behaviour in the Trump administration, with press secretary Sarah Huckabee Sanders asking certain outlets for questions ahead of major press conferences or events.

And during the Bush and Obama administrations, if reporters wanted to interview Cabinet secretaries, they were asked for the gist of their questions, The Daily Beast said.

Eric Schultz, a deputy press secretary in the Obama White House, also defended the practice to The Daily Beast.

“This is textbook communications work. The briefing becomes meaningless if the press secretary has to repeatedly punt questions, instead of coming equipped to discuss what journalists are reporting on,” he said.

Schultz added: “In a non-COVID environment, this would happen in casual conversations throughout the day in lower and upper press. One of the few upsides to reporters hovering over your desk all day, is that you get a very quick sense of what they’re working on.”

Later in the day, several current and former White House correspondents with experience covering multiple administrations also responded to the Daily Beast story. It was normal to give the press office a heads-up about topics they planned to ask about during briefings, they said, according to Mediate.

“As a former White House ‘booth producer’ who covered the Obama admin and some of Trump, it was my experience that this was standard practice for both â€” not to mine specific questions but to understand which topics were of interest,” Ali Rogin, a foreign affairs producer for PBS NewsHour, tweeted.

I agree with Ben here. When I covered the WH my questions were mostly obscure policy/regulatory/legislative in nature. I’d often email a Q to the press office in the morning knowing I could get an informed answer from @joshearnest during the briefing. https://t.co/I7KA3YqVGm

Hmmm, when I covered the Clinton WH, the morning gaggle was a way for Spox to find out what questions were on reporters’s minds in order to answer on camera at the briefing. This story (toward the end) kind of concedes this is similar in a pandemic world. Fewer “circle backs”! https://t.co/2wYgrmEWTb

“Our goal is to make the daily briefing as useful and informative as possible for both reporters and the public. Part of meeting that objective means regularly engaging with the reporters who will be in the briefing room to understand how the White House can be most helpful in getting them the information they need,” a White House representative told The Daily Beast.

“That two-way conversation is an important part of keeping the American people updated about how government is serving them.”

Insider has contacted the White House for comment on the report.

Read the full story at The Daily BeastÂ»