The Biden administration on Monday reopened a migrant child facility in Carrizo Springs, Texas, to house 700 unaccompanied minors aged 13 to 17, sparking criticism from activists, immigration lawyers, and even some Democratic members of Congress.

Carrizo is what’s known as an influx care facility, which means it’s not subject to state regulations. In other words, it doesn’t have a state license in childcare.

As the Department of Health and Human Services defines it: “An influx care facility is a type of care provider facility that opens temporarily to provide emergency shelter and services for [unaccompanied alien children] during an influx or emergency. Influx care facilities are not secure facilities.”

‘We need to completely reform our immigration system’

President Joe Biden promised to reverse the hardline, inhumane immigration policies of the Trump administration during his 2020 campaign. Though he’s already made a number of big steps in this regard, critics feel the reactivation of this Trump-era emergency facility in Carrizo Springs is regressive.

“It’s unnecessary, it’s costly, and it goes absolutely against everything Biden promised he was going to do,” Linda Brandmiller, a San Antonio-based immigration lawyer who represents unaccompanied minors, told The Washington Post. “It’s a step backward, is what it is. It’s a huge step backward.”

Democratic Rep. Alexandria Ocasio-Cortez of New York in a tweet said the reopening of the facility “is not okay, never has been okay, never will be okay – no matter the administration or party.”

“Our immigration system is built on a carceral framework. It’s no accident that challenging how we approach both these issues are considered ‘controversial’ stances,” Ocasio-Cortez added.

Similarly, Democratic Rep. Jamaal Bowman of New York in a tweet said, “Regardless of who’s in the White House, the words ‘migrant facility for children’ shouldn’t be in our government’s vocabulary.”

“We need to completely reform our immigration system with love and humanity,” he added.

That said, other experts caution that the situation is complicated – especially due to COVID-19 – and the administration has limited choices in terms of the care of unaccompanied minors under the circumstances.

“Influx facilities are always controversial because they are large and not subject to state regulation,” Mark Greenberg, a senior fellow at the nonpartisan Migration Policy Institute and former HHS official told Insider, adding that during the Trump administration “there were serious concerns about the adequacy of services and conditions” in such facilities as well as the length of time some children were held in them.

“Opening an influx facility is never something that people want to do, but sometimes, it’s the only alternative to having children backed up in [Customs and Border Protection] holding facilities that are totally inappropriate for children,” Greenberg said. “That’s the situation the administration is facing now,”

The Office of Refugee Resettlement (ORR), a program within HHS that’s responsible for unaccompanied minors, has 13,200 beds for children. But HHS says the coronavirus pandemic, combined with a surge in the number of migrant children arriving at the border, means a lot of those beds can’t be used. Customs and Border Protection encountered 5,871 unaccompanied minors at the Southwest border in January alone – the largest numbers seen in a single month since 2019.

Biden’s reversal of Trump-era immigration policies, including those that led to the expulsion of unaccompanied minors, has also translated into more migrant children in government facilities, officials told The Post.

HHS has cited this convoluted array of factors to explain why the Biden administration is resorting to the use of Carrizo Springs.

“While numbers of arriving children have been going up, the immediate urgency is happening because of COVID,” Greenberg said. “ORR had arranged to have over 13,000 beds available for arriving unaccompanied children, but right now, thousands of them can’t be used because of the need for social distancing, capacity to do quarantining and isolation of children, and meet other requirements for the safety of children and staff. That is why the agency has been running out of licensed beds.”

‘A government agency is not a parent for children’ 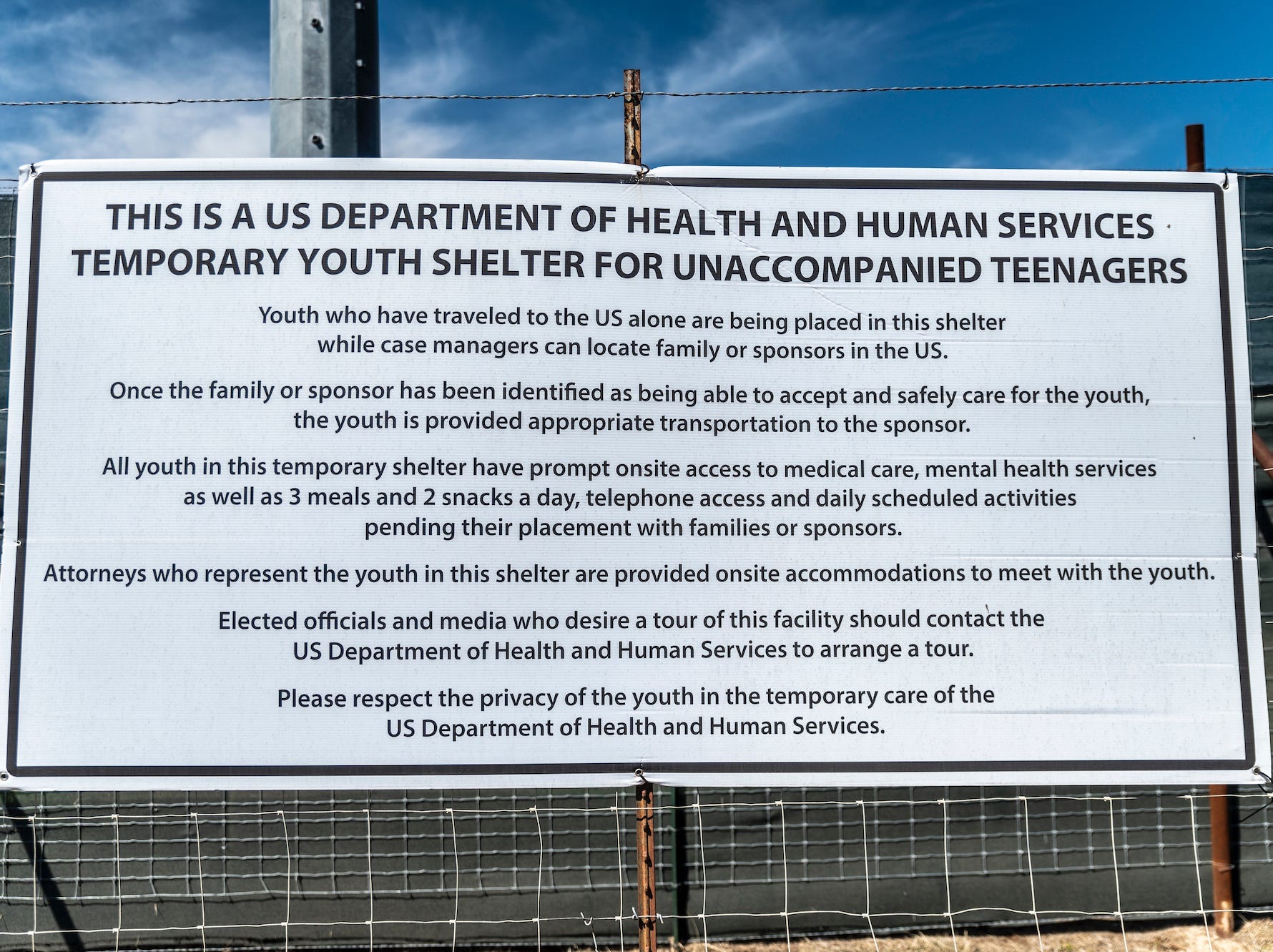 Sergio Flores/Getty ImagesA sign outside of a Influx Care Facility (ICF) for unaccompanied children explains what the facility is on Sunday, Feb. 21, 2021 in Carrizo Springs, TX.

HHS told The Post that the goal is to keep the kids at Carrizo for no longer than 30 days before releasing them to an approved sponsor, though the average stay for migrant children in shelters is 42 days.

“A government agency is not a parent for children,” Denise Bell, a researcher for refugee and migrant rights at Amnesty International USA, said in a statement.“The reality is that children who are alone need to be accommodated for their safety while the government identifies and reunites them with appropriate sponsors. We don’t want to endanger children and we don’t want them held in detention or in facilities that don’t meet their best interests.”

HHS spokesperson Mark Weber told The Post that the broken immigration system is largely to blame.

According to a report by the Miami Herald, the Biden administration is also moving to reopen Homestead detention center for unaccompanied migrant teens, a deeply controversial facility under the Trump administration, due to the rise in border crossings.

The Biden administration “inherited a system that holds unaccompanied children in temporary facilities and it will take time to move away from the system,” Bell said, underscoring that it’s important that the administration limit the use of influx care facilities and “move quickly towards relying only on licensed facilities.”

Addressing criticism of the reactivation of Carrizo Springs during Tuesday’s press briefing, White House press secretary Jen Psaki said the facility is not akin to “kids being kept in cages.”

Democrats frequently accused the Trump administration of putting migrant children in cages, as they decried President Donald Trump’s separation of families at the border and the conditions minors were kept in.

Psaki said it’s “never our intention of replicating the immigration policies of the past administration,” adding that Carrizo Springs will “follow the same standards as other HHS facilities.”

“We are not going to expel unaccompanied minors at the border. That would be inhumane,” Psaki said. “We need to find places that are safe under COVID protocols for kids to be, where they can have access to education, health and mental services consistent with their best interest. Our goal is for them to then be transferred to families or sponsors.”