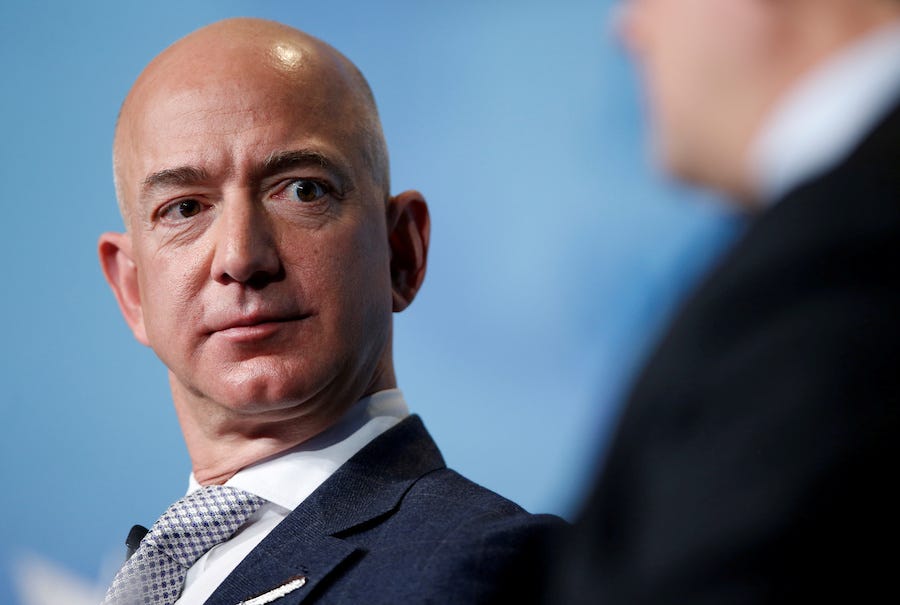 More than 100 demonstrators gathered outside Jeff Bezos’ Washington, DC, mansion on Thursday and constructed a guillotine outside his front door to protest Amazon workers’ wages.

The protest came the day after Bezos’ net worth surpassed $US200 billion, making him the richest person in history, according to Forbes. His wealth has grown by about $US85 billion since January, boosted by Amazon’s soaring revenue amid the COVID-19 pandemic.

Angelia Maphlin, an Amazon warehouse worker who travelled to D.C. from Jacksonville, Fla. for Thursday’s protest, told Business Insider that she wanted to protest Amazon’s enforcement of mandatory overtime during the pandemic. Maphlin, who is currently on medical leave, said she felt unsafe showing up to work amid spiking COVID-19 cases in Florida.

“While [Bezos is] off living his luxury lifestyle, the people in his warehouses are suffering,” Maphlin said. “They make all this money off the backs of essential workers. They call us heroes, but you don’t force a hero to be a hero. We aren’t heroes. We don’t have a choice.”

The guillotine was just a prop and not functional, Maphlin added.

A video posted to Twitter by a Washington Examiner reporter shows former Amazon warehouse worker Christian Smalls, an outspoken Amazon critic, calling on the company to raise its minimum wage from $US15 per hour to $US30 per hour in light of Bezos’ surging wealth. The protest was led by the Congress of Essential Workers, a group founded by Smalls.

“Give a good reason why we don’t deserve a $US30 minimum wage when this man makes $US4,000 a second,” Smalls said.

They’re asking for a $30 minimum wage. “Why not?” The lead protester says. pic.twitter.com/KlfXaUvq2X

Smalls was fired from Amazon’s Staten Island warehouse after calling for better safety standards amid the pandemic. He said he was fired as retaliation for organising a walkout after an employee tested positive for the coronavirus, but Amazon denied this.

Since then, he has led multiple protests targeting Amazon and Bezos, including an August 10 protest outside Bezos’ New York apartment building.

While the COVID-19 pandemic has prompted some Amazon employees to speak out about working conditions, it’s also been a financial boon for the company. It reported $US88.9 billion in sales in the second quarter of 2020, a record for the company.

An Amazon spokesperson did not immediately respond to a request to comment.