The year's best wildlife photos reveal a super-chill monkey, a rare Siberian tiger, and an ant clinging to a beetle's leg Sergey Gorshkov/Wildlife Photographer of the YearA Siberian tiger hugs a Manchurian fir, rubbing her cheek against bark to leave her scent in Russia’s Land of the Leopard National Park.

Sergey Gorshkov was determined to find a Siberian tiger. He knew it wouldn’t be easy. The species is known to live only in sections of Russia and China and was hunted almost to extinction in the 20th century. In the wild, only about 540 of the tigers remain, and they’re spread across vast territories.

So Gorshkov, a photographer based in Russia, roamed the country’s 1,000-plus-square-mile Land of the Leopard National Park, scouring the forest for any signs of tigers â€” hair, scratch marks, urine.

In January 2019, he hung a camera across from a grand fir tree in an area he believed tigers had visited. Ten months later, his efforts paid off: The camera captured a tigress as she embraced an ancient Manchurian fir, rubbing her cheek against the bark to leave her scent behind.

Gorshkov’s photo won the 2020 Wildlife Photography of the Year competition, which is organised by the Natural History Museum in London. Now in its 56th year, the contest drew over 49,000 entries from photographers in 25 countries.

In addition to awarding a first-place prize, the contest also selects winners in 17 categories, including best underwater photo and best animal portrait. Many of the winners across all categories depict animals’ struggles to survive in shrinking habitats and a warming world.

Below are the 16 other contest winners.

The youngest photographer to win an award, 10-year-old Andrés Luis Dominguez Blanco, captured a stonechat balancing on a delicate stem. Andrés Luis Dominguez Blanco/Wildlife Photographer of the YearA stonechat balances on a stem above a field of sweet-scented sulla vetches.

Blanco said he often hears stonechat birds outside his home in Andalucia, Spain. So when he saw them flitting about in a nearby meadow, he asked his father if they could return in the family car.

Blanco knelt on the car’s backseat and pointed his camera out the open window, training his lens on a single male stonechat. Blanco’s shot of the bird’s balancing act won the contest’s 10-and-under age division.

Liina Heikkinen, who won the contest’s Young Wildlife Photographer of the Year award, captured a fox cub stealing dinner from its siblings. 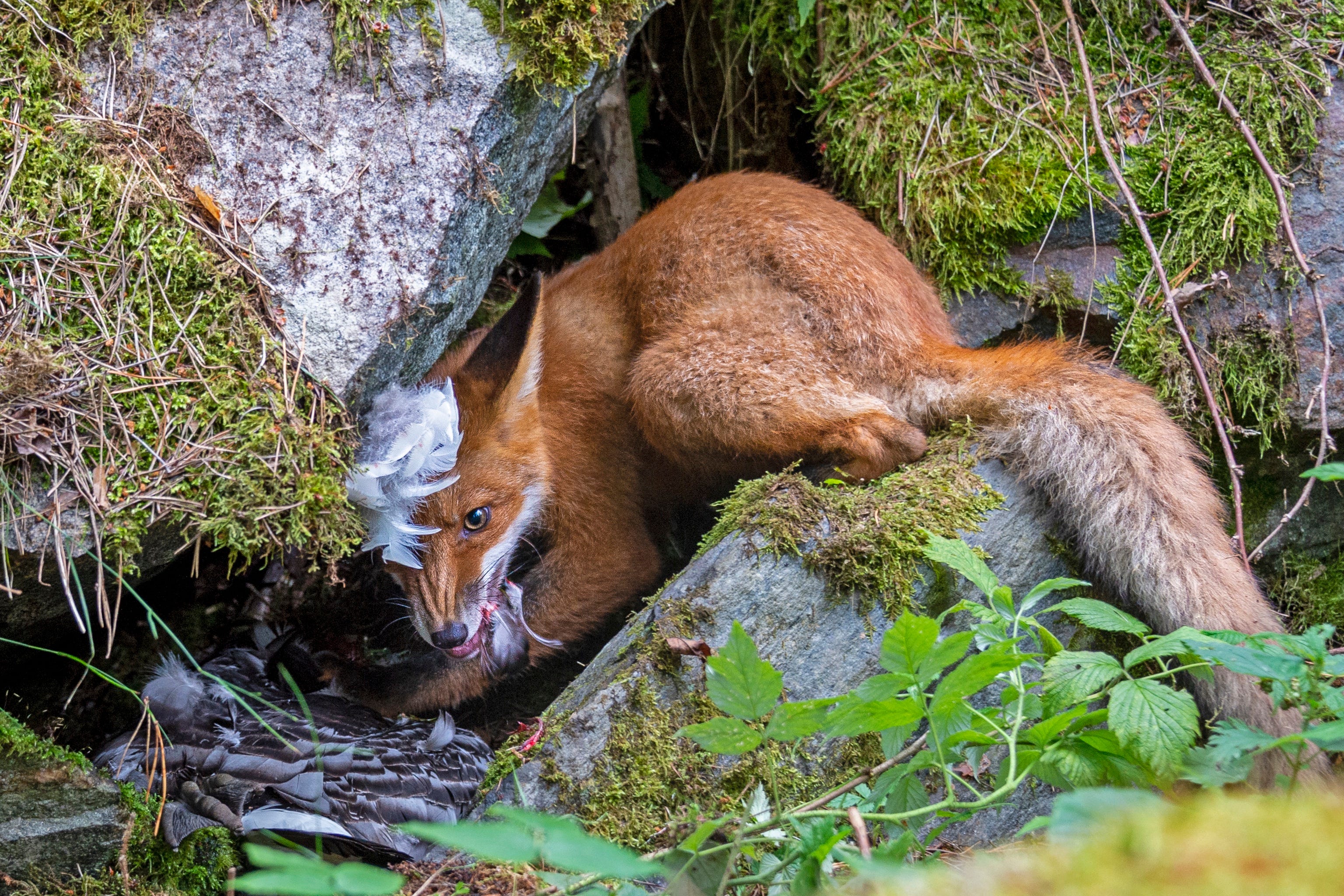 Liina Heikkinen/Wildlife Photographer of the YearA fox cub drags a barnacle goose into a crevice on the island of Lehtisaari, Finland.

Heikkinen and her father spent a day in July watching a family of foxes on the island of Lehtisaari in Finland. At 7 p.m., the mum brought home a goose. Her cubs fought over it, sending feathers flying. A single cub emerged victorious.

After urinating on its prize, the winning cub dragged the carcass into a crevice and started chomping. Its snarling expression was a warning to its siblings: Don’t you dare steal this goose back.

Eleonora’s falcons are fierce predators, too. This one is bringing his mate the carcass of a smaller bird. 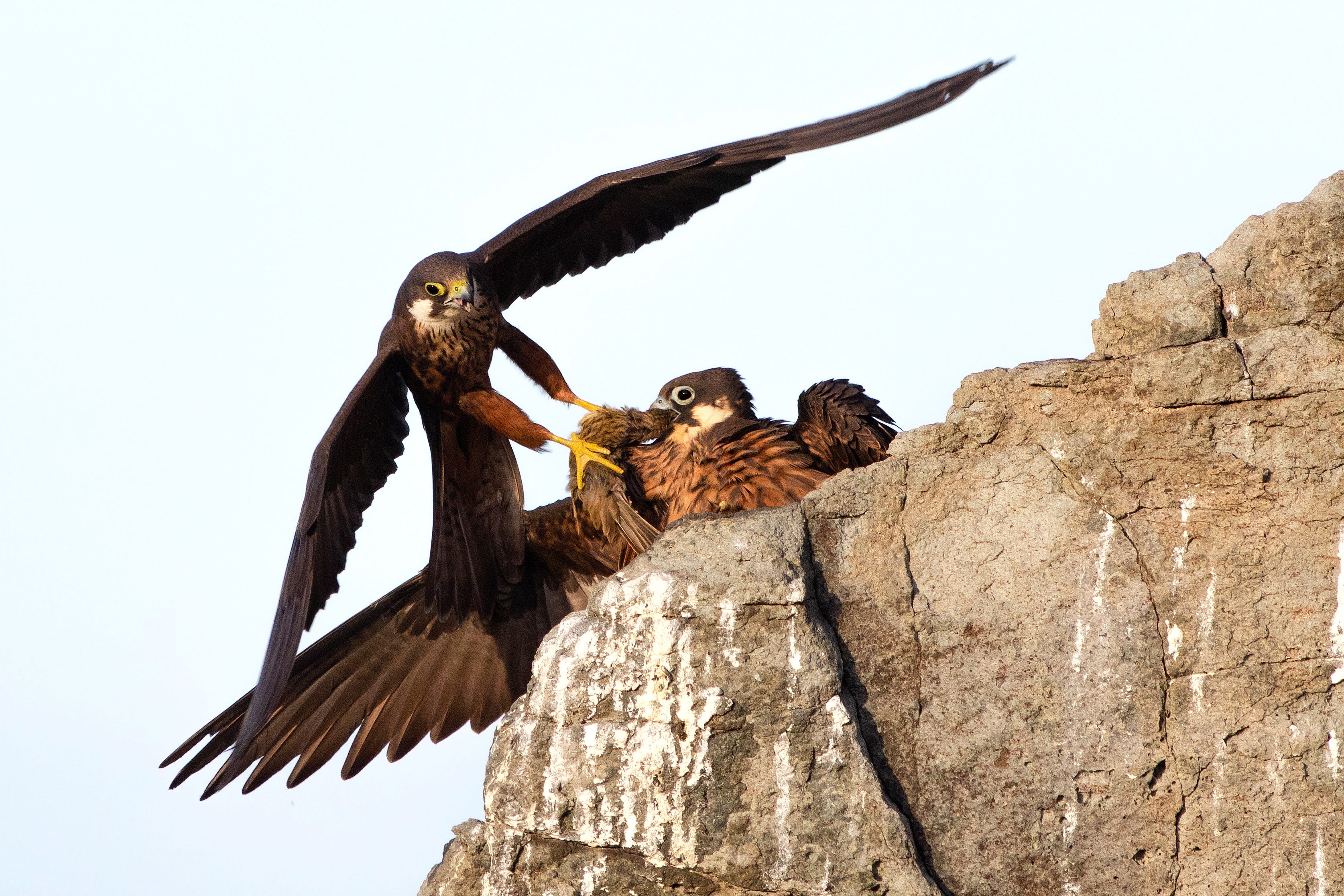 Alberto Fantoni/Wildlife Photographer of the YearA male Eleonora’s falcon brings his mate food on the steep cliffs of Sardinia in the Mediterranean Sea.

Alberto Fantoni photographed the birds on the edge of a cliff in Sardinia, along the Mediterranean coast. A migratory species, these falcons feed on insects and other migrant birds.

These great crested grebes work together to feed their chicks. 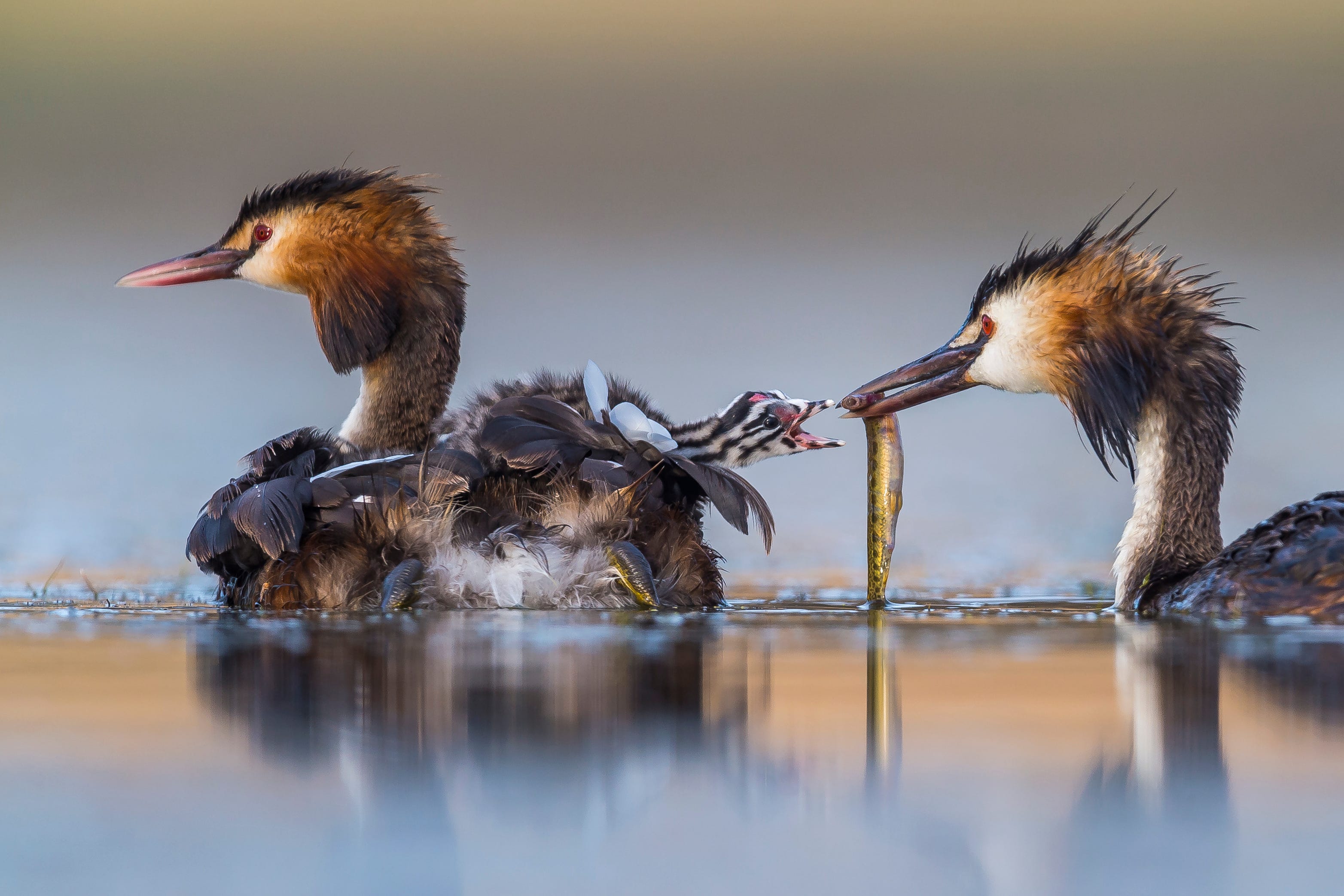 Great crested grebes hold their chicks nestled in their backs for two to three weeks after they’re born to keep them safe from predators. The chicks, appropriately called backlings, require lots of food to grow.

This photo, taken by Jose Luis Ruiz Jiménez, shows one parent emerging from an underwater fishing expedition as the chicks reach to grab the morsel.

Photographer Frank Deschandol’s shot of two unlike insects shows how timing can be everything for a great shot. Frank Deschandol/Wildlife Photographer of the YearA red-banded sand wasp (left) and a cuckoo wasp, about to enter next-door nest holes.

Normally, red-banded sand wasps and cuckoo wasps don’t interact. But by taking pictures on an extremely fast shutter speed, Deschandol captured both wasps in exquisite detail as they entered their neighbouring nest holes at the same time.

Lighting is crucial, too. In this image, photographer Songda Cai’s camera flash cast a golden glow on a baby diamondback squid. 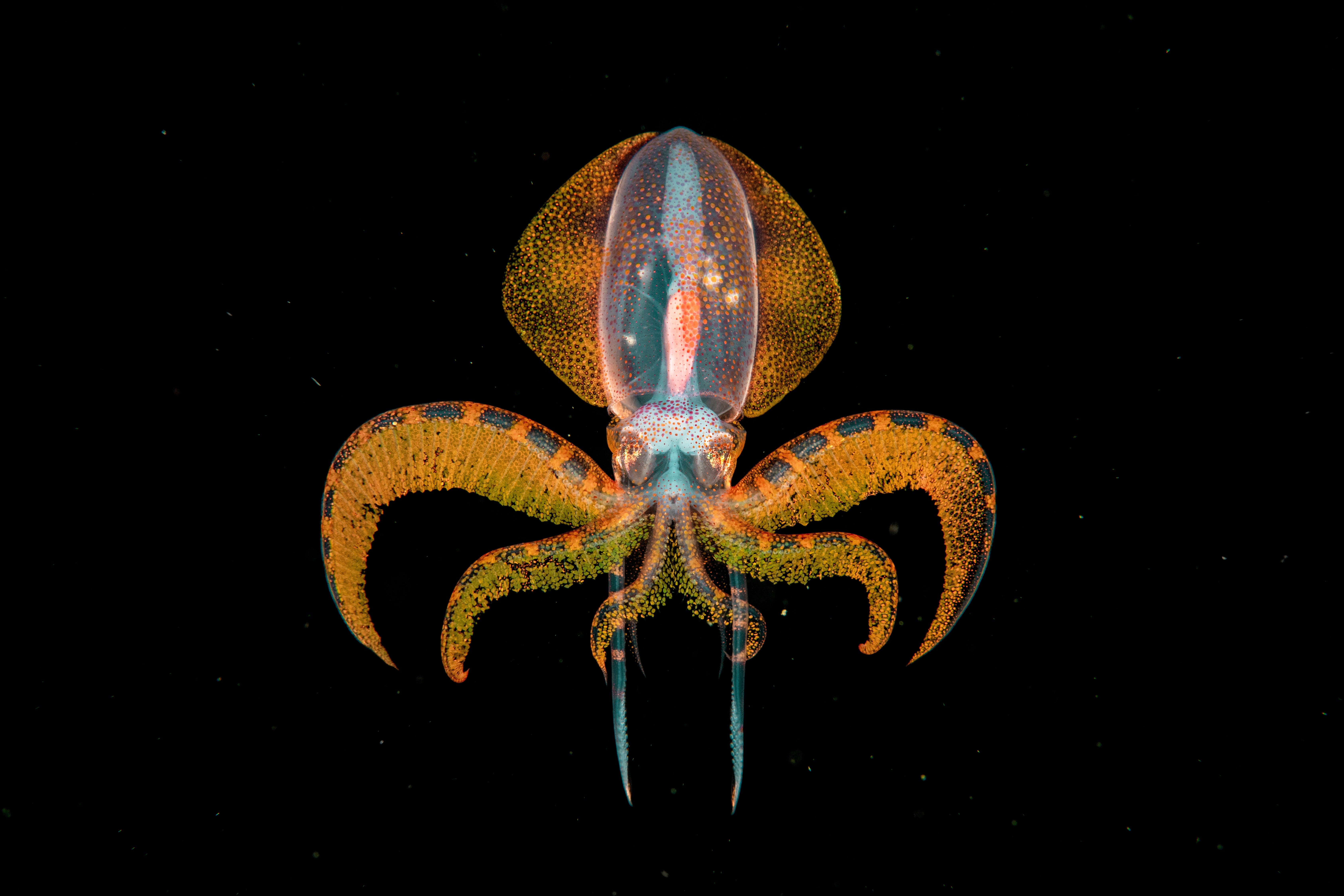 Cai photographed the squid as it hunted off the coast of Anilao, in the Philippines. Diamondback squids are mostly transparent, but their skin cells contain pigment that reflect and scatter light, making them appear iridescent.

To get his desired light, photographer Alex Badyaev set up his camera in a tree, hidden behind a piece of bark, then angled its flash to bounce off the trunk and cast light on this nest without bothering the birds. 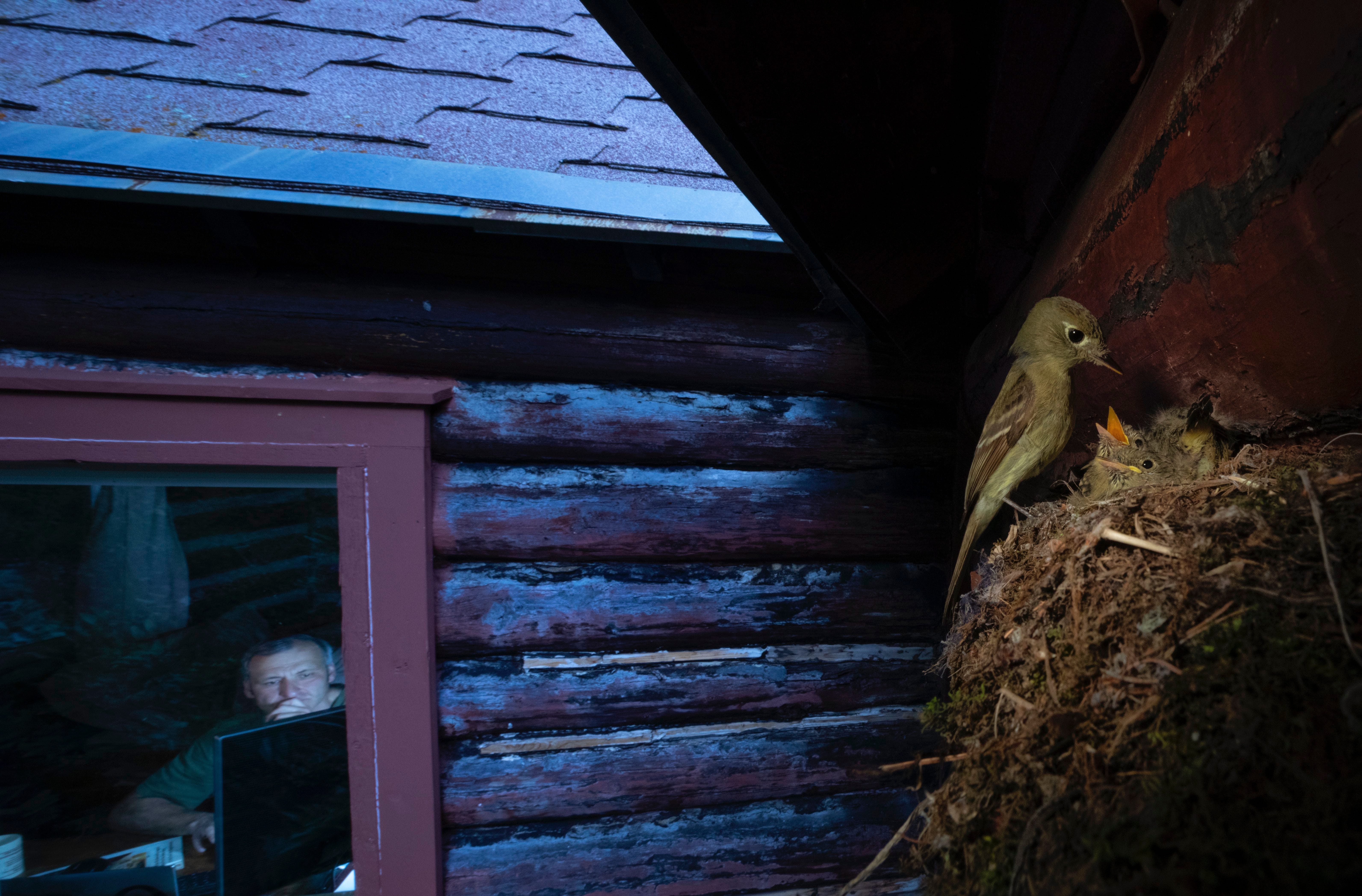 Alex Badyaev/Wildlife Photographer of the YearA female Cordilleran flycatcher checks on her nestlings outside a cabin in Montana’s Rocky Mountain Front.

The nest belongs to Cordilleran flycatchers; the mum is tending to her 12-day-old hatchlings.

A great photo requires preparation. Photographer Shanyuan Li spent six years observing Pallas’ cats before getting this shot of a group of kittens. 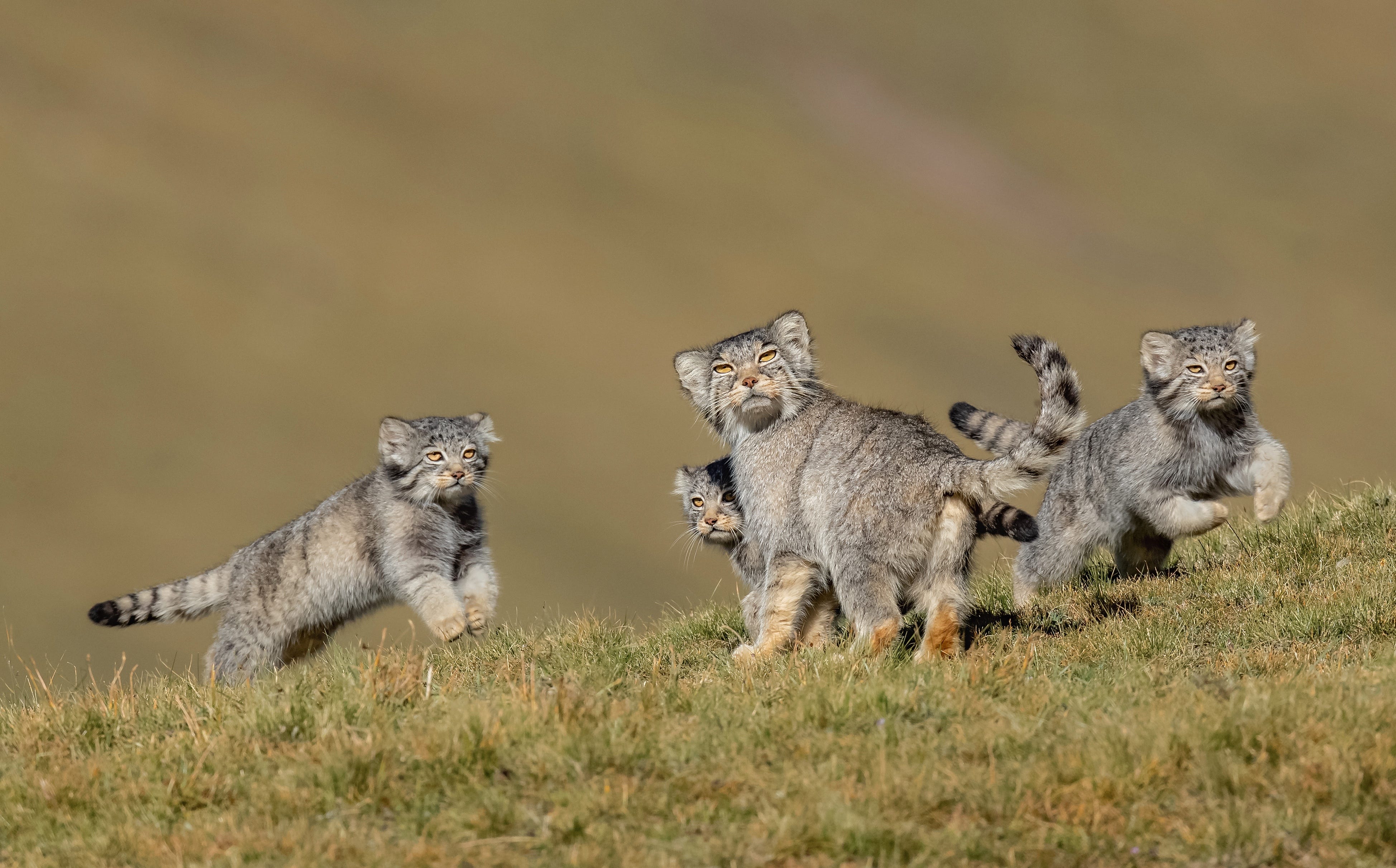 Shanyuan Li/Wildlife Photographer of the YearA family of Pallas’s cats, or manuls, on the remote steppes of the Qinghai–Tibet Plateau in northwest China.

Pallas’ cats are a solitary, rarely seen species that resides at high altitudes in northern China. Through his research, Li determined that he would get his best photo of them in August or September, the time of year when kittens are a few months old.

His shot shows the kittens right after their mother warned them of a Tibetan fox lurking close by. Some look confused; others have already started running home.

Several of the winning photos in this year’s contest show wildlife in captivity. Here, a young pig-tailed macaque sits chained to a wooden cage, looking forlorn. 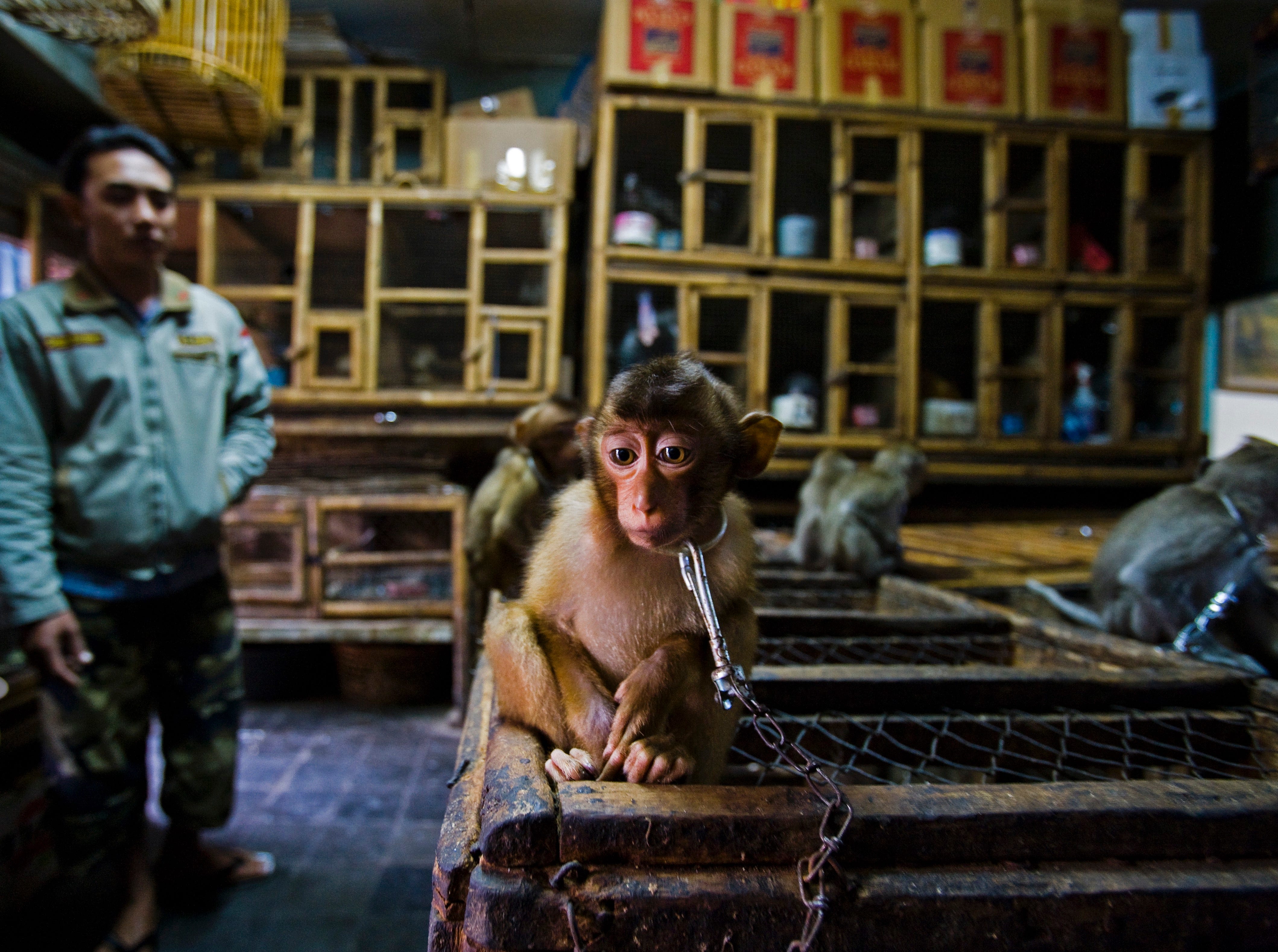 Paul Hilton/Wildlife Photographer of the YearA young pig-tailed macaque is put on show, chained to a wooden cage in Bali’s bird market, Indonesia.

Normally vibrant and social creatures, pig-tailed macaques are increasingly under threat. They live in forests throughout Southeast Asia, but when palm oil companies and other groups destroy these forests, that leads the primates to raid farms, where they get shot as pests. Their babies are often sold illegally at markets like the one in Bali shown above.

Photographer Paul Hilton told a trader that he was interested in buying a macaque in order to get into a back room at a market, where he captured the monkey’s downcast expression.

In Russia’s Circus on Ice, trainers force polar bears to dance and perform tricks. It’s the only circus known to use polar bears in shows. Kisrten Luce/Wildlife Photographer of the YearA trainer directs a polar bear at an ice-rink show in Kazan, Russia.

The bear shown above been performing for 18 years, ever since she was captured from an Arctic island at the age of two. In this image, taken by Kirsten Luce, the bear stands on her hind legs, her jaw sealed in a wire muzzle.

Polar bears are considered a vulnerable species, but this Manduriacu glass frog is critically endangered. 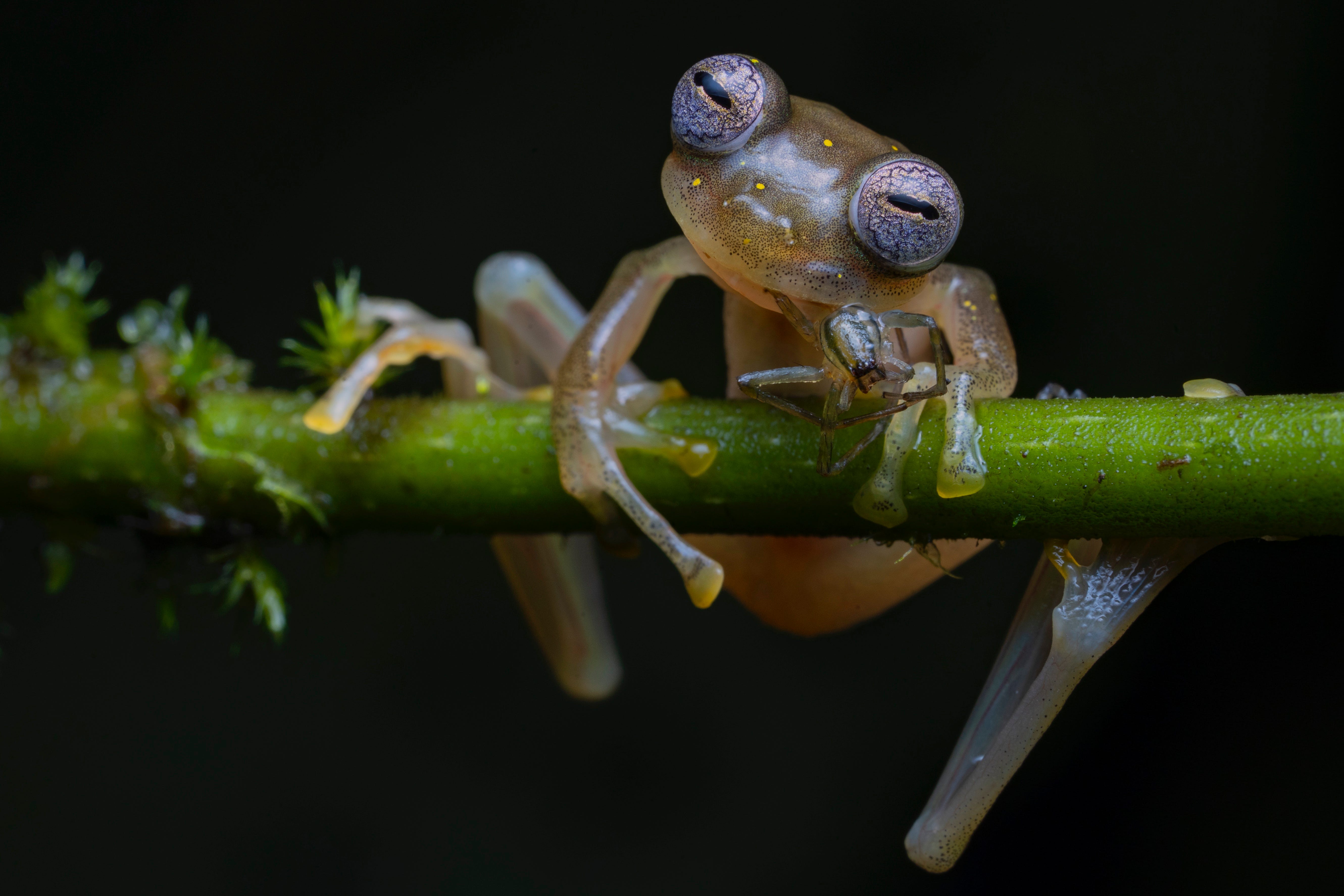 Jaime Culebras/Wildlife Photographer of the YearA Manduriacu glass frog eats a spider in the foothills of the Andes, northwestern Ecuador.

Photographer Jaime Culebras took this picture of the frog clinging to a branch in the heavy rain, its webbed feet splayed as it snacks on a spider. The shot is the first ever of a Manduriaci glass frog eating. Culebras found the creature on a small, private reserve in northwestern Ecuador, the only region where the species has been found.

The proboscis monkey is also endangered, though this male’s expression looks quite peaceful. 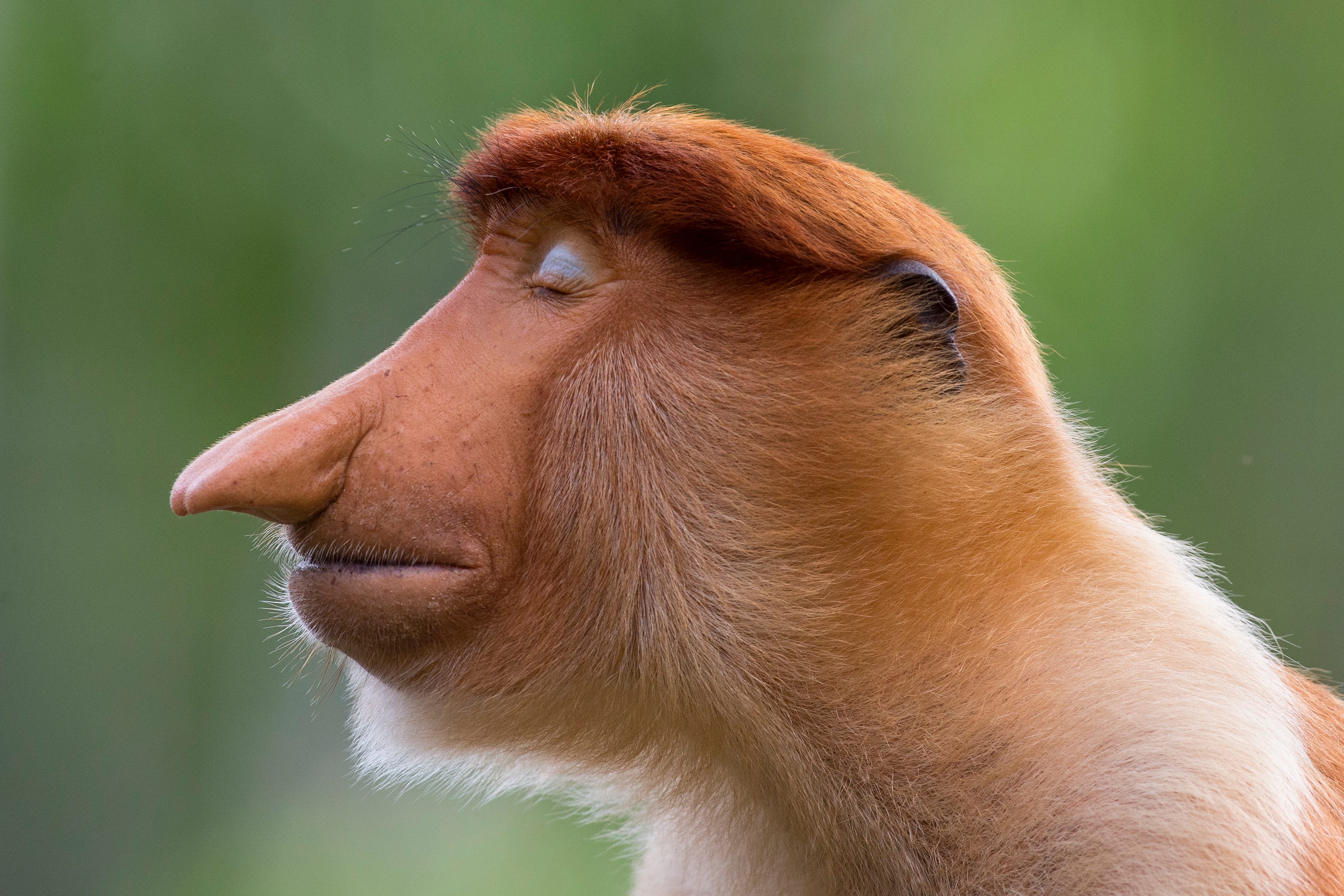 The young monkey’s serene expression is “quite unlike anything I’ve ever seen on another monkey,” photographer Mogens Trolle said.

Found only on the island of Borneo and a few islands nearby, the proboscis monkey is named for the males’ huge noses, which they use to attract mates and signal status. They’re hunted for their bezoar stones: lumps of intestinal secretions used in Chinese medicine.

Of course, species that aren’t endangered face plenty of challenges, too: This photo shows a parasite inside the mouth of a common clownfish. It sucked the blood in the fish’s tongue until it fell off. 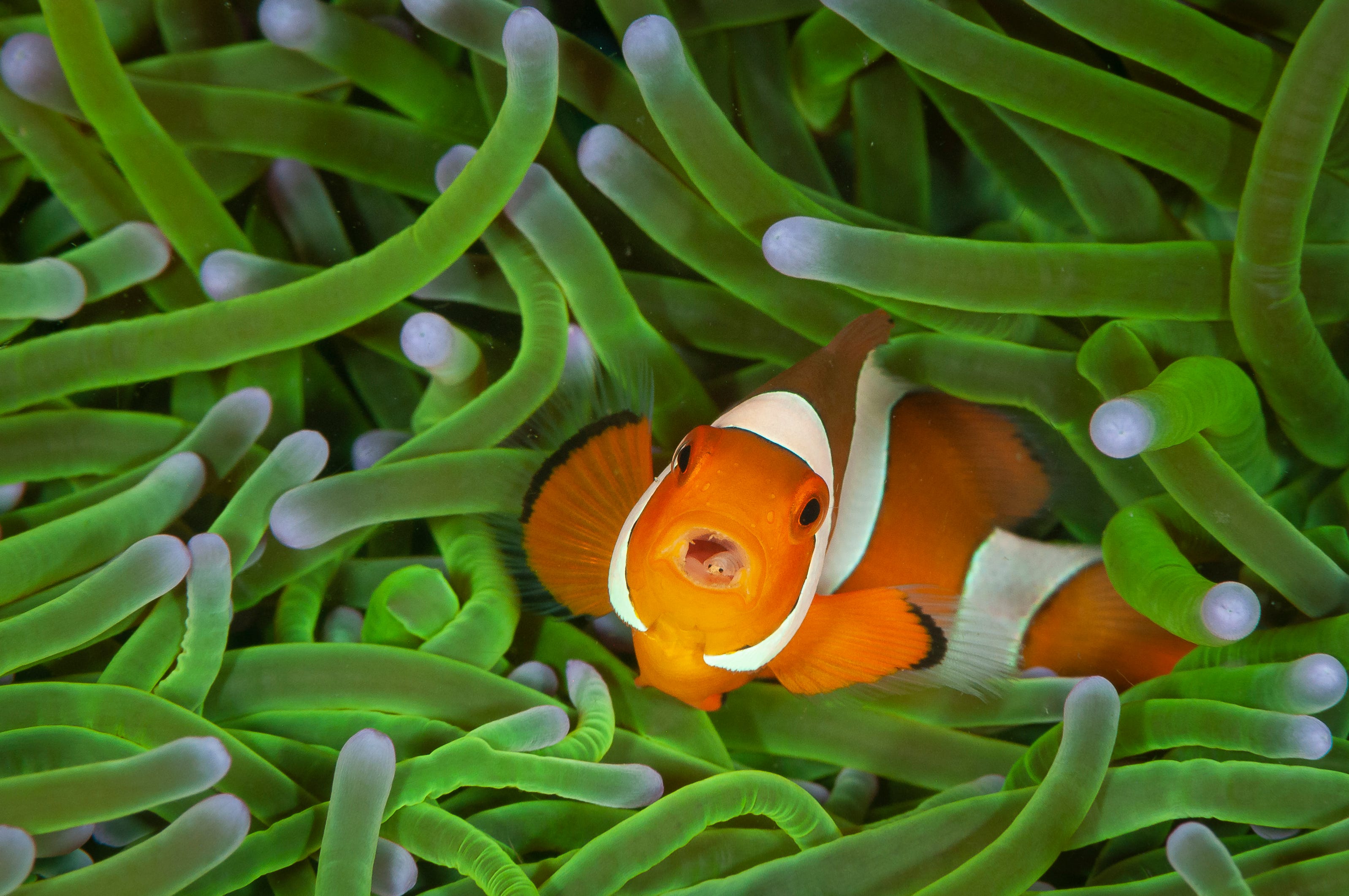 Sam Sloss/Wildlife Photographer of the YearA ‘tongue-eating louse’ peeks out from the mouth of a clownfish as it swims through an anemone off the coast of North Sulawesi, Indonesia.

The ‘tongue-eating louse’ swims through the clownfish’s gills, then hitches itself to the base of the fish’s tongue. Once the tongue is gone, the parasite burrows into the fish’s mouth for good. For the rest of their lives, the clownfish and the parasite then depend upon each other. The louse feeds off the fish’s blood and mucus, and the fish uses the louse as its new tongue. Teenage photographer Sam Sloss captured this image.

The scene shown below, however, does not show any symbiosis whatsoever: A beetle is trying to rid itself of a weaver ant that had bit into its leg. 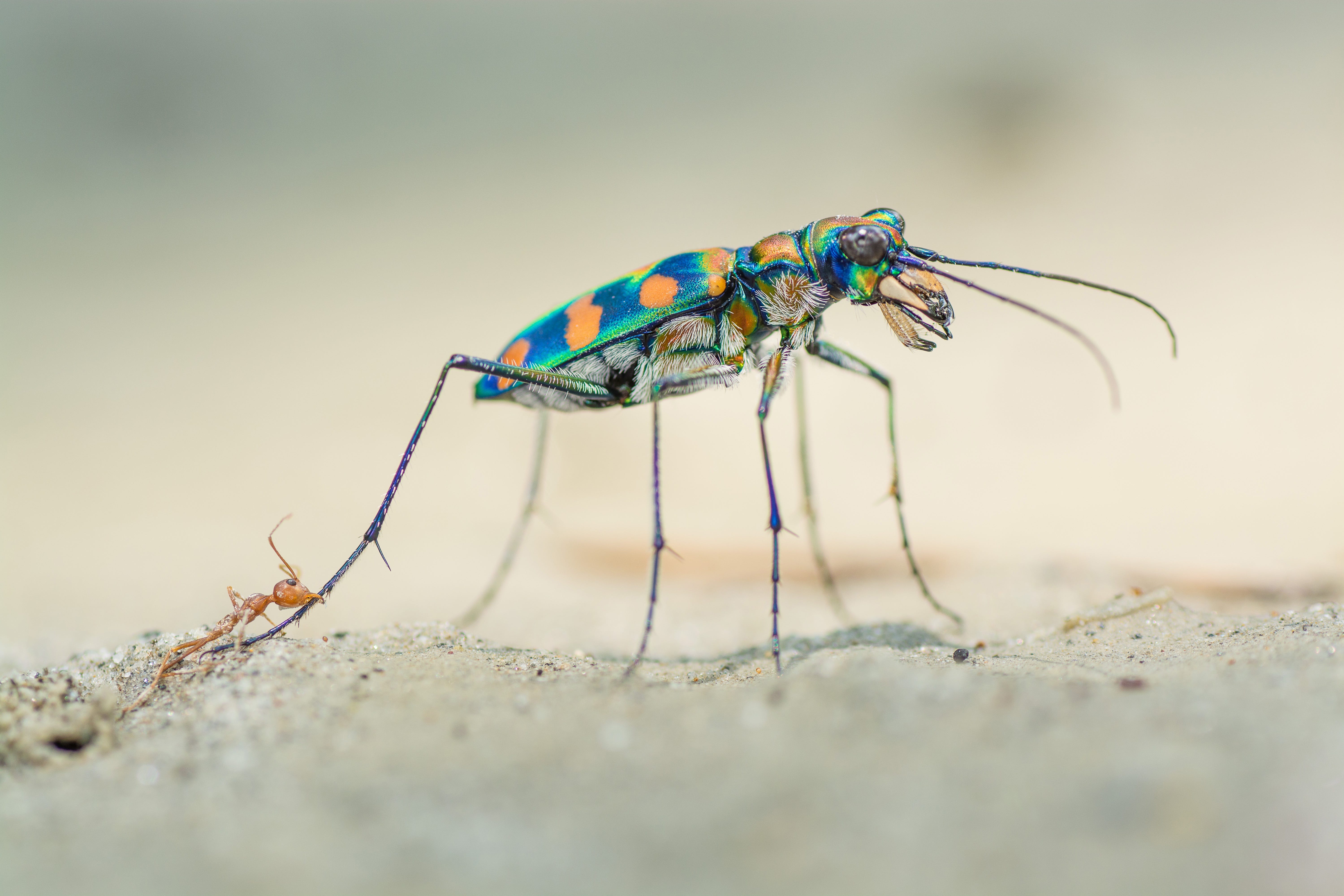 Ripan Biswas/Wildlife Photographer of the YearA weaver ant pulls at the leg of a Giant Riverine Tiger Beetle.

The beetles secrete cyanide and can barrel quickly toward their prey.

In the scene shown in photographer Ripan Biswas’s image, this beetle had already snapped the ant in two with its clicking mandibles. But the ant’s head and upper body remained firmly attached.

“The beetle kept pulling at the ant’s leg, trying to rid itself of the ant’s grip, but it couldn’t quite reach its head,” Biswas said.

The term wildlife doesn’t just apply to animals, of course. It can also refer to plants like these white arnica flowers. 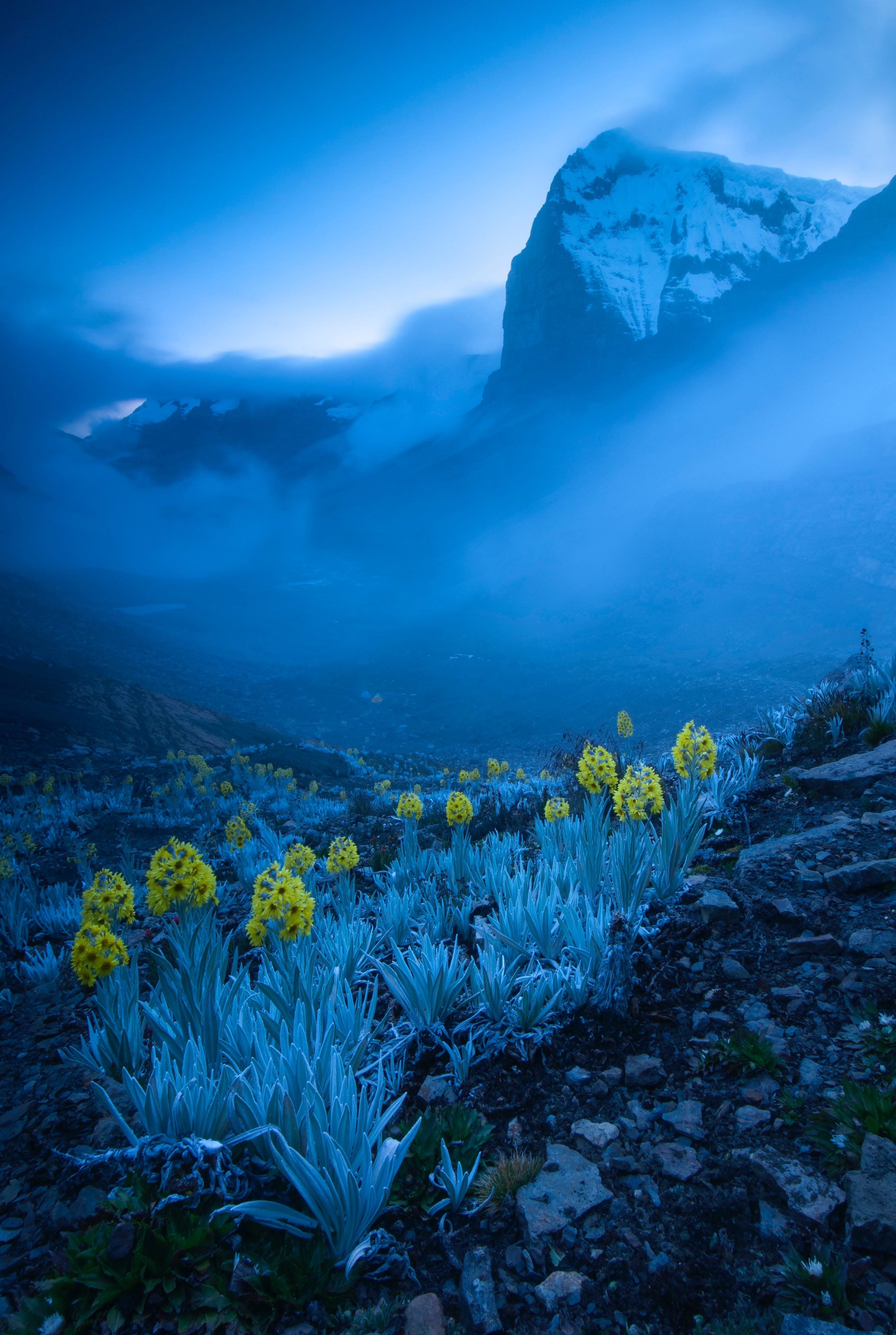 Gabriel Eisenband/Wildlife Photographer of the YearGroupings of rare white arnica flowers stand out against the blue dusk as Ritak’Uwa Blanco, the highest peak in the Eastern Cordillera of the Colombian Andes, looms in the background.

Photographer Gabriel Eisenband found the flowers by accident while on a trip to take pictures of the mountain behind them: Ritak’Uwa Blanco, the highest peak in the Eastern Cordillera of the Colombian Andes.

But the tufts of white arnica caught Eisenband’s attention. A member of the daisy family, these plants contain proteins in their leaves that keep them from freezing in extreme cold.

The same goes for lava like this dramatic flow along the side of Mount Etna. 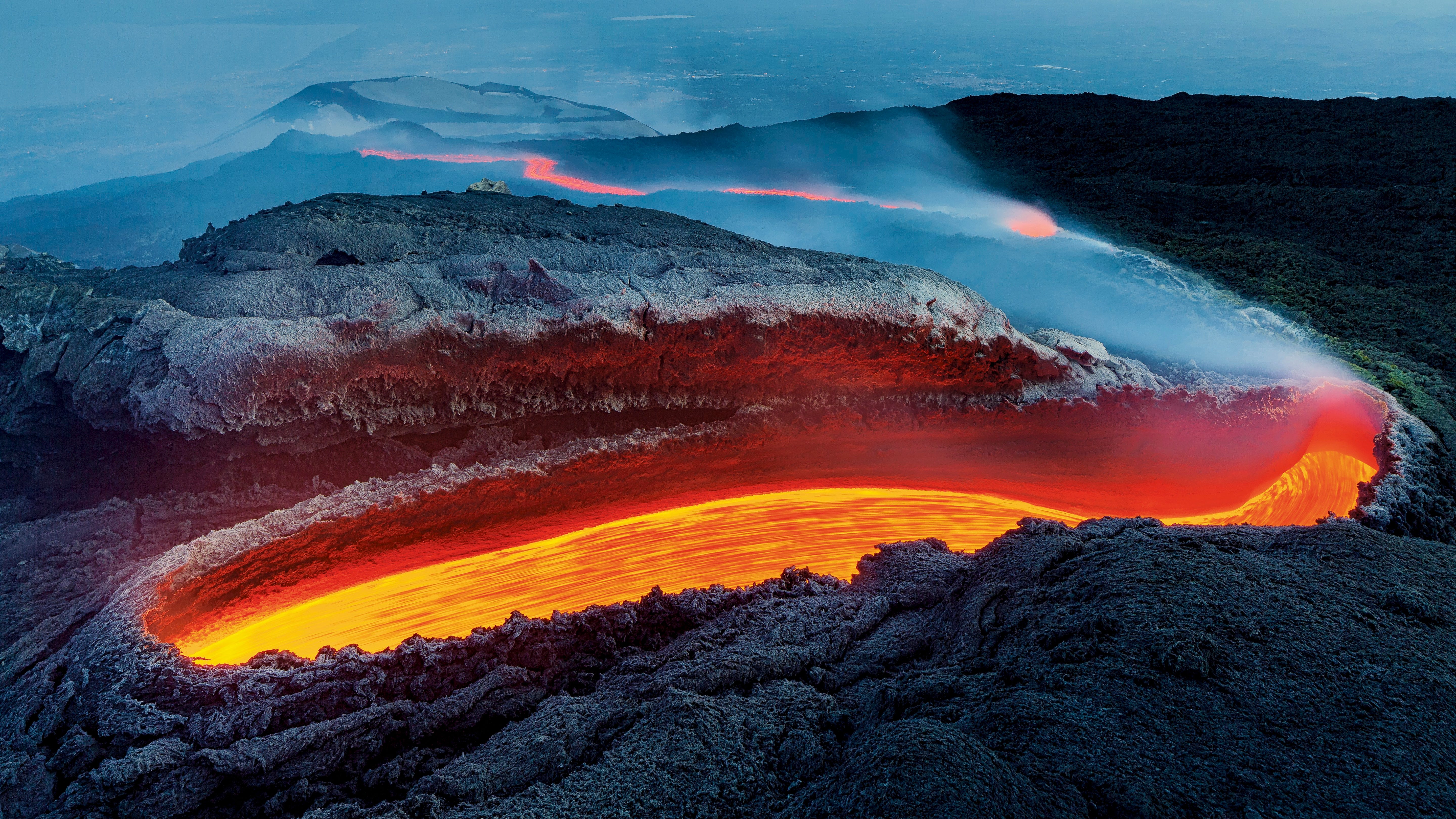 Luciano Gaudenzio/Wildlife Photographer of the YearLava flows within a huge lava tunnel on the southern flank of Mount Etna.

Mount Etna sits between the African and Eurasian continental plates and has been erupting continuously for 30 years.

In this photo, taken by Luciano Gaudenzio in 2017, a gash on the mountain’s southern flank spews lava. The molten river looked like “an open wound on the rough and wrinkled skin of a huge dinosaur,” Gaudenzio said.